The engine removed from the car for repair is completely or partially disassembled, depending on the nature of the damage

Disassembly of YaMZ-236 and YaMZ-238 engines is carried out taking into account design features.

Before disassembly, the engine is temporarily placed on a stand, protecting the pallet from damage, unscrew the bolts securing the clutch housing. 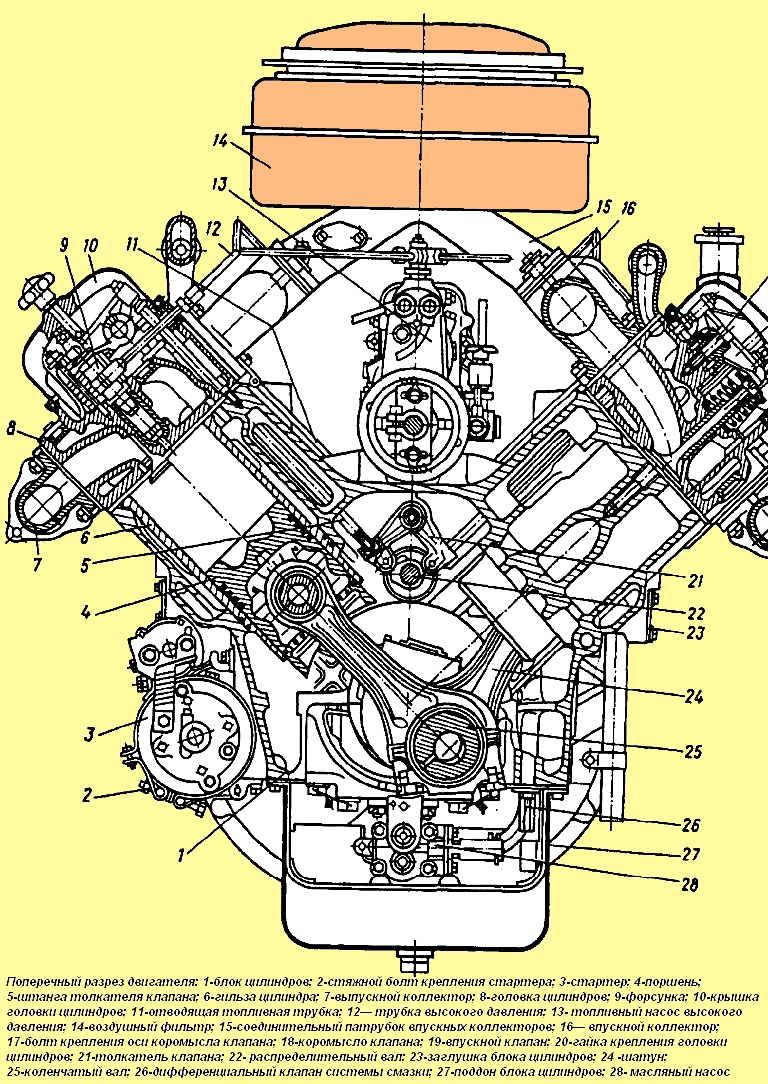 The bolts must be unscrewed gradually, loosening one by one, otherwise the last remaining bolts may be torn off by the force of the pressure springs.

Next, you need to remove the driven disk.

For YaMZ-238K, YaMZ-2Z8, YaMZ-236K clutches, the middle drive and front driven discs should also be removed.

After that, it is necessary to unpin and unscrew the two coupling bolts 2 (Fig. 1) fastening the starter, remove the starter 3, the generator and the air brake compressor by unscrewing the bolts, remove the impeller 10 (Fig. 2) of the fan, unscrew the rod 17 and remove the air filter 16, remove the four side plugs 23 (see Fig. 1), two each on the right and left sides.

Having installed the engine on the stand (Fig. 3) and secured it with four clamps inserted into the holes of the water channels, you must: 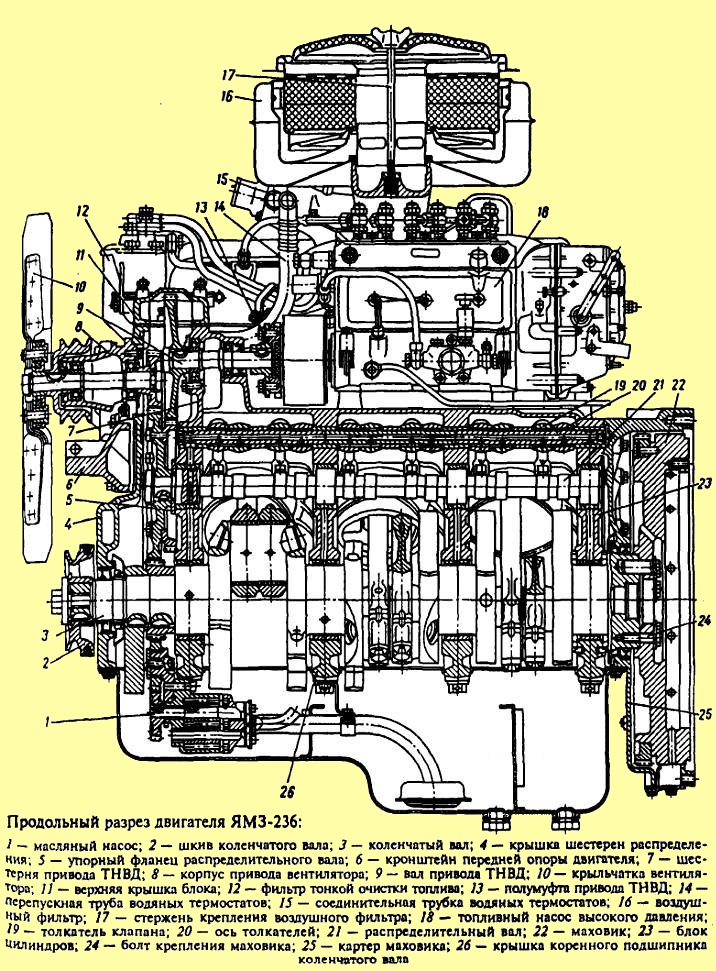 Having removed the covers of 10 cylinder heads, you must:

Turning the engine on the stand with the flywheel housing down, remove the sump 27, oil pump 28 with differential valve 26 and tubes.

Turn the engine to the working position and disconnect the low pressure pipes, remove the fuel filter 12 (Fig. 2) fine cleaning;

To remove the flywheel, we use two knobs 1 (Fig. 3), which we screw into special holes with M12 x 1.75 thread until it stops into the crankshaft 2.

In order not to skew the flywheel 3, we screw the knobs at the same time.

Then, remove the flywheel housing 25 (Fig. 2), the sidewall of the oil pump pulley and the oil pump drive belt.

After that, remove the bracket 6 of the front engine mount and the top cover 11 of the block, the fan drive housing, the cover 4 of the distribution gear assembly with the water pump.

Turning the engine on the stand with the crankcase up, you should: 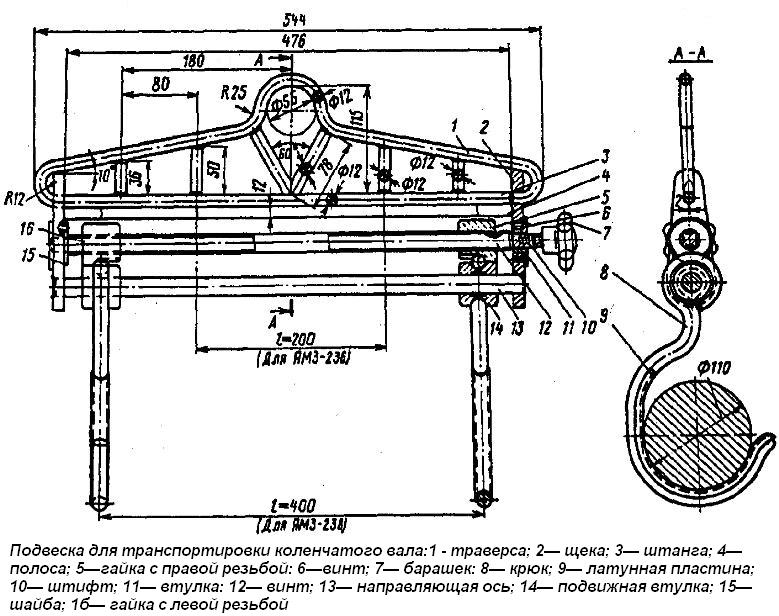 Turning the engine on the stand with the crankcase down, unscrew the bolts securing the thrust flange of the driven gear of the fuel pump drive.

Having previously unbent the lock washers, remove gear 7 complete with shaft 9 and bearings, as well as all cylinder liners.

The liners are removed from the cylinder block using the tool shown in fig. 6. 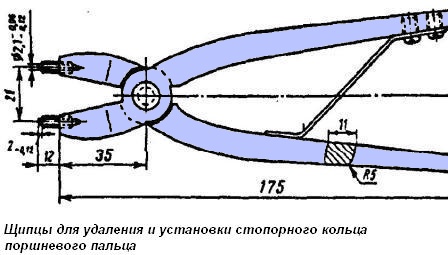 Squeezing the valve spring, remove the valve retainers and the conical bushing of the poppet, and then the poppet, outer and inner springs.

In the same sequence, work is performed for the remaining valves.

Then turn the cylinder head with the valve heads up, remove the valves from the guide bushings.

To separate the piston from the connecting rod with pliers, remove the circlips of the piston pin and push it out with a mandrel.

Then, the compression and oil scraper rings are removed from the piston. 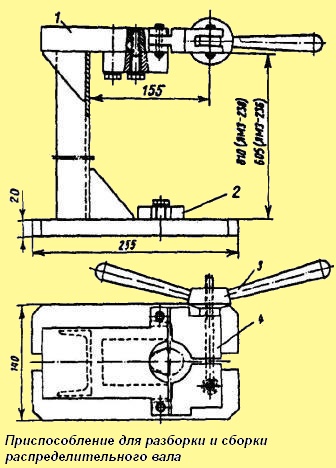 Disassembly of the camshaft is carried out in the device shown in fig. 8.

The camshaft is installed with the rear support cheek in the thrust bearing with the front neck in the clamp 4 and fixed by turning the handle 3.

To prevent the shaft from turning, there is a prismatic cutout in the top plate 1, where the camshaft cam enters. .

Then, having screwed the bolts 5 of the puller into two technological threaded holes in the body of the distribution gear (Fig. 9), turning the screw 2 with the stop 8 in the direction of the end of the shaft, we press the gear. 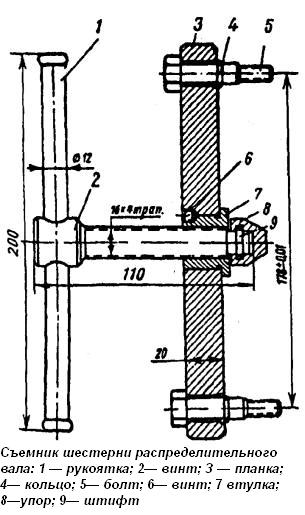 Disassembly of the flywheel housing consists in pressing out the rear crankshaft oil seal.

The flywheel housing hatch cover and the piston top dead center indicator are not removed, and the need for their replacement is determined during the repair process.

After disassembling the engine, clean all mating surfaces from gasket residues and dirt and thoroughly wash the parts.