Unlike the fuel pumps models 33-02 and 334, installed on diesel engines, the pump model 335 on the cover of the speed regulator has a mechanism that serves to reduce the cyclic supply of fuel to the engine cylinders when switching to gas-diesel operation.</p >

In addition, this pump has a three-mode crankshaft speed controller instead of an all-mode one.

The three-mode regulator ensures normal operation of the engine in diesel mode, as well as the minimum uneven supply of the ignition dose of fuel in gas-diesel mode. 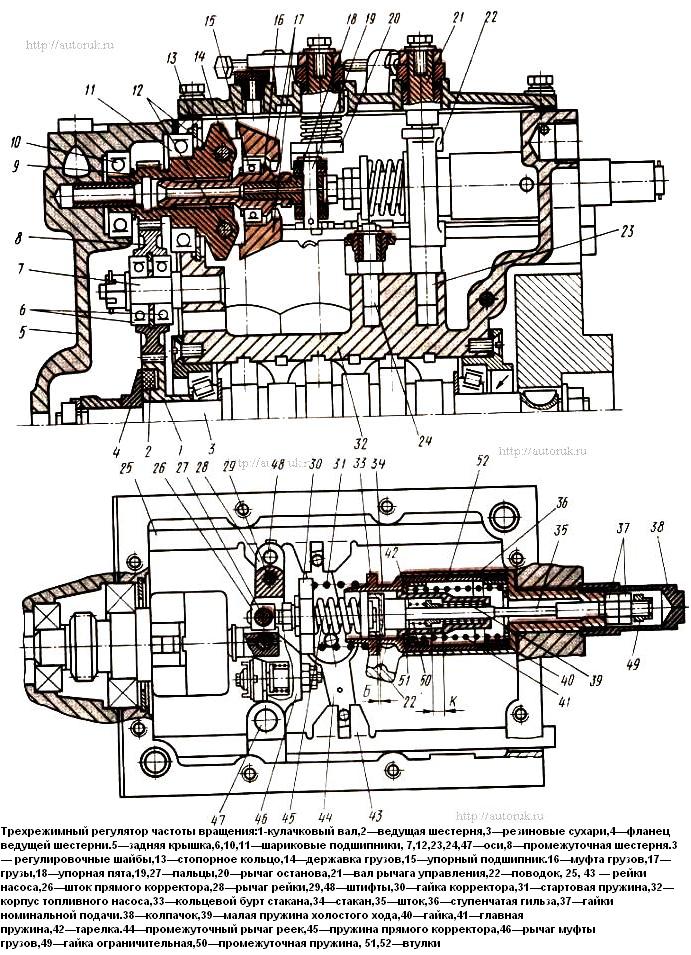 As you can see from the figure, the drive device of the three-mode governor, including the damper, drive and intermediate gears, weight holders and weights, is the same as that of the all-mode governor.

Design differences are in the arrangement of internal levers 28 and 46 in the presence of a spring element; in addition, the starting spring 31 has been modified and instead of the spring lever (installed on the all-mode regulator), a leash 22 in the form of a fork is installed on the axis 23, connected by a shaft 21 to the external control lever of the regulator.

The lever 28 of the rail with the pin 19 is connected with the lever 46 of the cargo clutch and the pin 48 with the rail 25 of the fuel pump.

Between the lever 46 of the clutch and the lever 28 of the rack there is a reverse corrector, and the rod 26 of the direct corrector is pivotally attached to the rack lever by means of a pin 27.

A pin 29 is pressed into the rail lever, on which the stop lever 20 acts, moving the levers and the injection pump rail associated with them in the direction of turning off the fuel supply at the moment the engine stops.

The lever 28 of the rail through a straight corrector into the rod 35 is connected with a spring element, which is installed in a stepped sleeve 36. Pressed into the injection pump housing.

The glass 34 serves as a guide for the corrector rod 35, which has stop collars and a threaded part for screwing in two nuts 37 of nominal feed and a restrictive nut 49.

After adjusting the position of the nuts 37, they are locked, the nut 49 is screwed on and everything is closed with a cap 38, which is screwed onto the threaded part of the sleeve 36 and sealed.

The spring element consists of a cup 34. which has an annular shoulder 33 on one side, and a thread for screwing in a nut 40 on the other. Three springs are coaxially placed inside the cup.

Small spring 39 regulates the speed of the crankshaft in the zone of low speeds.

The main spring 41 of the regulator is designed to control the speed in the zone of speeds close to the maximum.

The intermediate spring 50 operates in the medium frequency zone and serves to form the pilot dose of fuel.

Small spring 39 (idle) is mounted on rod 35 between bushings 51 and 52 without pre-compression.

The intermediate spring 50 is installed on the rod 35 between the washers at the end of the rod and the sleeve 52 without pre-compression.

The starting spring 31 is located between the nut 30 of the corrector and the annular shoulder 33 of the cup 34.

The regulator has direct and reverse correctors.

The direct corrector assembly consists of a corrector rod 10, a hinge fixed with a pin 9 on the rail lever 11. A bushing 17 is screwed onto the threaded end of the corrector rod 18, locked with a nut 12.

The reverse corrector is designed to reduce the fuel supply when the engine crankshaft speed decreases in the low speed zone.

The reverse corrector device is similar to the one installed on the all-mode controller.

In various engine operating modes, the regulator operates as follows.

To start the engine, the control lever and with it the leash 22 are turned counterclockwise.

The glass 34 moves to the left until the plate 42 stops against the shoulder of the rod 35 and compresses the idle spring 39.

With a further increase in the crankshaft speed to 800 rpm, the rack moves in the direction of the “-” sign.

This position of the rack is maintained until the speed reaches 1000 rpm. 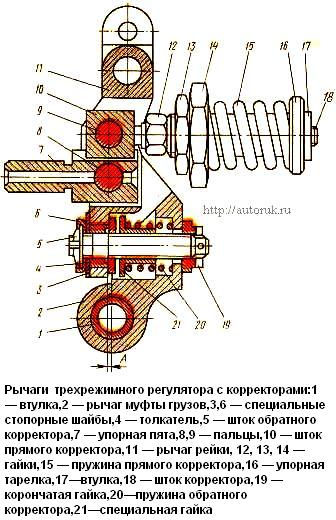 The force of the spring 20 is chosen so that when the speed increases above 1100 rpm, it is compressed until the speed reaches 1700 rpm, and the spring 45, due to the greater tightening force, holds the rod 26. In this case, the clutch 16 moves to the right.

The lever 46 rotates clockwise around the axis 47, and the lever 28 makes a complex movement.

Turning together with the lever 46 clockwise around the axis 47, it simultaneously compresses the spring 20 of the reverse corrector.

Choosing gap A, the lever 11 of the rack turns around the pin 9 and shifts the rack in the direction of the “+” sign.

The preload of the spring 15 is chosen so that the centrifugal force of the weights overcomes it at a speed of 1600 rpm.

When the crankshaft speed exceeds 1800 rpm, the spring 45 is compressed, and the corrector rod 26 moves to the right until the speed reaches 2200 rpm.

Clutch 16 and levers 28 and 46, which make up a rigid structure with a compressed reverse corrector, move to the right, shifting the rail in the direction of the “-” sign and thereby reducing the fuel supply.

Thus, the gap B between the corrector rod 26 and the end of the regulator rod head 35 disappears at a crankshaft speed of 2200 rpm, and the injection pump rails take a position corresponding to the minimum fuel supply, which is regulated by nuts 37 on rod 35.</ p>

The slats will remain in this position until the centrifugal force of the weights can overcome the force generated by spring 41 at a crankshaft speed of 2700...2740 rpm.

With a further increase in the speed of rotation, the force of the loads through the levers 28 and 46, the corrector rod 26 and the rod 35, as well as the plate 42, will compress the spring 41 until the rails take a position that corresponds to the maximum idle speed.< /p>

If the crankshaft speed is increased further, then the weights of the injection pump regulator will develop such centrifugal force that they will set the racks to the off-feed position. In this case, the engine does not work.

This scrolling mode occurs, for example, when the car is moving downhill.

When the engine is switched to gas-diesel mode, the movement of the external regulator control lever is limited by a mechanical stop to the position in which fuel is supplied by the pump, not exceeding the ignition dose.

In the position corresponding to engine idle, the three-mode governor automatically maintains the minimum engine speed.

When the outer control lever of the regulator reaches the stop, the sleeves. 36 will move to the left, the gap K will decrease.

With an increase in the rotational speed, the centrifugal force of the loads is crowned, under the action of which the rod 35 will move 7 to the right, compressing the idle spring 39.

When the racks are in the position corresponding to the crankshaft speed of 1200 rpm, clearance K will disappear. The intermediate spring 50 will begin to compress, the stroke of which is chosen so that it compresses only up to reaching a speed of 2560 rpm.

When the rotational speed reaches this value, the rod 35 will rest against the plate 42 of the corrector body. In this case, the main spring 41 of the regulator will begin to compress and the supply of the ignition dose of fuel will turn off.