The pressure relief valve is used to reduce the air pressure in the front axle brake chambers during low-intensity braking, which improves stability and controllability (especially on slippery roads), as well as to quickly release air from the brake chambers when releasing the brakes

In the initial position (without braking), the output II is connected to the atmosphere through the brake valve. The large piston 2, under the action of the spring 1, occupies the upper position.

The brake chambers of the front wheels are connected to the atmosphere through the valve terminals I and III.

Upper valve 4 under the action of spring 9 is pressed against the seat of the small piston and separates the pressure limiting valve into two cavities. 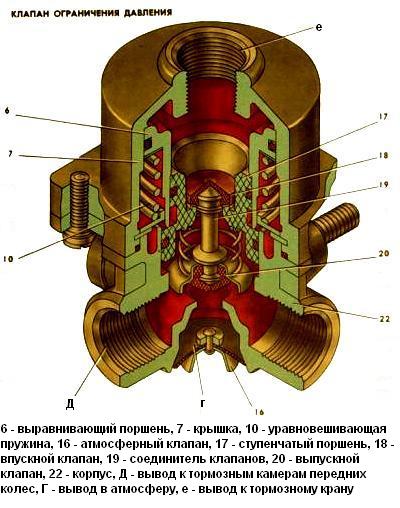 When braking, the compressed air coming from the brake valve to the output II acts on the upper end of the small piston 3 and moves it down together with the double valve.

Compressed air flows to the brake chambers of the front wheels until the pressure on the lower end of the piston 3 is balanced by the air pressure acting on the upper end, and valve 4 closes.

This ratio is maintained when the pressure in the II outlet increases to 350 kPa.

If the pressure in the outlet II becomes more than 350 kPa, which corresponds to the force of the balancing spring 1, the piston 2 starts to work, which also starts to move down, increasing the force acting on the upper end of the piston 3.

Thus, a follow-up action is carried out over the entire range of operation of the pressure limiting valve.

When the pressure at the output II decreases (the brake valve is released), pistons 2 and 3 move upwards, the inlet valve 4 closes, and the outlet 6, starting to move with the piston, also opens the compressed air from the brake chambers vents to atmosphere via output III.

In this case, the pressure relief valve works as a quick release valve.