In addition, the reducer is equipped with an unloader, which automatically shuts off the gas supply to the engine when it stops and reliable tightness of the reducer when the engine is not running

In the gas-cylinder installation of KamAZ vehicles, a two-stage low-pressure reducer of a membrane-lever type is used. 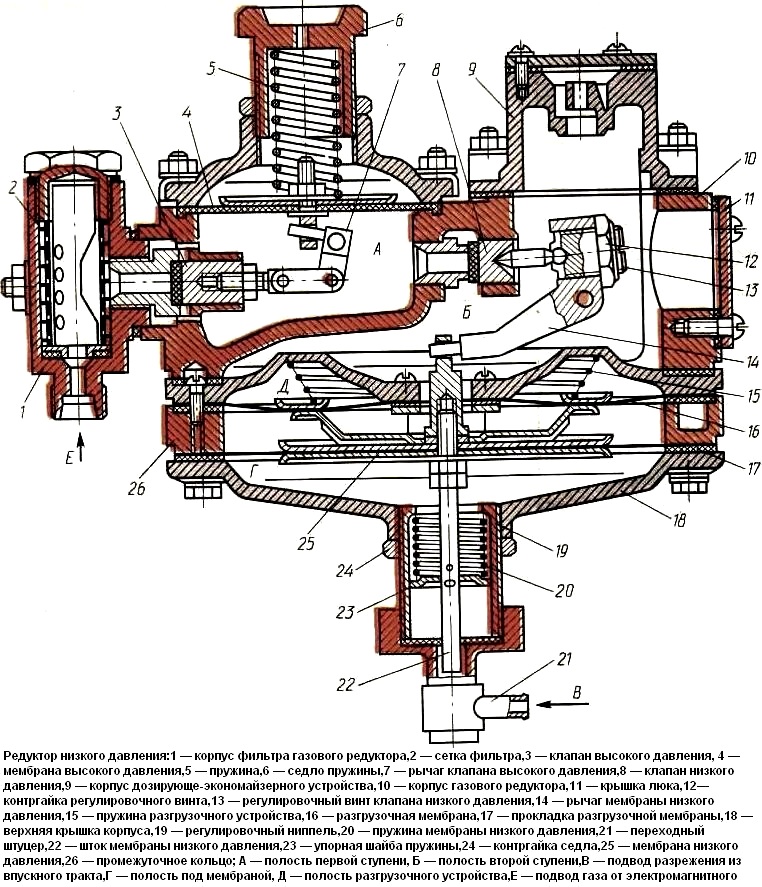 The reducer consists of an aluminum housing 10 with an internal partition, in which two cavities are formed: A - the first stage, B - the second stage.

The cavity of the first stage is closed from above by a lid, a flexible membrane 4 is clamped between the lid and the body. A seat 6 of a spring 5 is screwed into the lid, which constantly presses the membrane down.

The force of the spring can be adjusted by the seat 6. fixed in the set position by the lock nut.

The seat has a hole connecting the cavity above the membrane with the atmosphere. An angular lever 7 is connected to the membrane rod, pivotally mounted on an axis.

The second end of the lever is connected to the high pressure valve 3.

The cavity of the second stage is closed from below by cover 18, which, together with the intermediate ring 26, is bolted to the body.

Membrane 25 is clamped between the cover and the ring. The space above the membrane constantly communicates with the engine intake tract in the area between the air cleaner and the mixer.

The membrane is pressed down by the spring 20, acting through the thrust washer 23 on the rod 22. fixed in the membrane.

The spring is installed in the adjusting nipple 19. threaded into the cover. By rotating the nipple, the spring force is adjusted.

In the installed position, the nipple is secured with a locknut. The upper end of the rod 22 is connected to the angular lever 14, mounted in the cavity of the second stage pivotally on the axis.

The second end of the angular lever through the adjusting screw 13 and the intermediate rod acts on the valve 8. installed in the guide lug of the body, constantly pressing it with a rubber insert to the seat, through the opening of which the cavities of the first and second stages can communicate with each other.</p >

The design feature of the second stage is the presence of an unloading device, which consists of a membrane; 16, cover and conical spring 15.

The spring 15 of the unloader with the engine off creates an additional force on the membrane 25 of the second stage of the gearbox.

The cavity Д of the unloader is constantly in communication with the diffuser of the gas mixer.

A mesh gas filter is installed at the inlet to the first stage of the reducer and is designed to clean the gas from the smallest particles of dust, rust and other mechanical impurities that can compromise the tightness of the reducer valves.

In the first stage of the gearbox, a remote electric pressure gauge sensor is installed, which controls the gas pressure from the cab.

The action of the reducer is as follows

When the gas line is closed, the diaphragm 4 of the first stage bends down under the action of the spring 5 and the angle lever turns counterclockwise around the axis, setting the valve 3 to the open position.

Atmospheric pressure is set in all cavities of the gearbox.

When the gas line is opened, the gas from the cylinders, having passed the filter, enters through the open valve 3 into the cavity A of the first stage.

When the engine is running, a vacuum is created in the mixer diffuser, which is transferred to the D cavity of the unloader.

The membrane 16 rises, compressing the conical spring 15, thereby unloading the membrane 25 of the second stage of the gearbox.

At the same time, the vacuum from the mixer diffuser is transferred to the cavity B and the membrane 25, freed from the additional force of the unloading device, bends inward, overcoming the resistance of its spring 20.

When the membrane 25 is moved, the angle lever 14 releases the valve 8, which will open under the gas pressure from the cavity A.

Gas coming from cavity A of the first stage into the B cavity of the second stage, expands in it, as a result of which its pressure drops to close to atmospheric.

If the gas pressure in the B cavity starts to exceed 100...150 kPa, the membrane, going down, will close the valve.

Thus, the required gas pressure in the second stage will be maintained at the required level all the time. Then the gas flows through the hole in the housing 9 and through the pipeline to the dispenser and then to the mixer.

The gearboxes used in KamAZ gas diesel engines do not have a dosing-economizer device and a dosing washer, which are available on carburetor gas engines.

The second-stage membrane, freed from the force of the unloader, is highly sensitive and, depending on the engine operating mode and the vacuum change in the cavity, constantly regulates the gas flow to the dispenser using valve 8.

The vacuum in the diffuser, transmitted to the B cavity of the second stage, depends on the degree of clogging of the air cleaner: the more dirty the filter element, the greater the vacuum, which causes a greater gas flow.

To eliminate the influence of air cleaner clogging on gas consumption and engine power indicators, the second stage reducer membrane is insensitive to an increase in intake tract resistance.

This is achieved by communicating the cavity G under the membrane with the intake tract in the area between the air cleaner and the mixer.

When the engine is running, a slight vacuum occurs in its intake tract.

This vacuum is much less than in the diffuser, it is transmitted through the pipeline to the cavity Г under the second stage diaphragm of the reducer, so the membrane 25 bends inward under a pressure equal to the difference in vacuums in the diffuser and in the intake tract before diffuser.

When the resistance of the air cleaner changes, the pressure acting on the membrane will be constant, and therefore, the gas flow through the valve of the second stage of the reducer will be maintained, i.e. when the air cleaner is clogged or its filter element is removed, the vacuum will change by the same amount simultaneously in the cavities B and D reducer.

For the normal operation of the correction system, it is necessary to monitor the cleanliness and tightness of the channel from the cavity Г under the membrane of the second stage of the gearbox to the inlet tract.