The engine cooling system is liquid, closed type, with forced circulation of the coolant 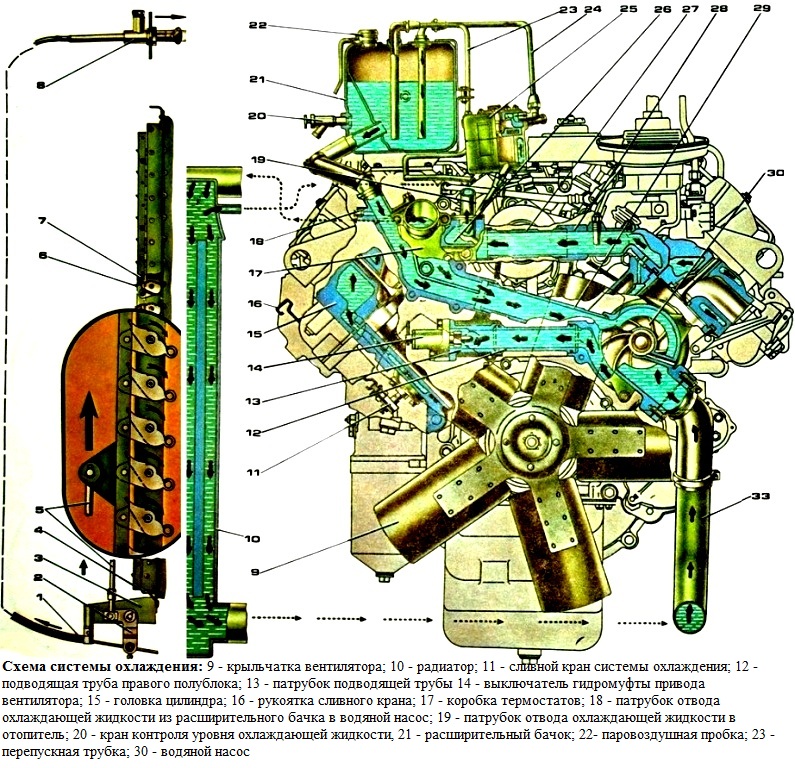 While the engine is running, the water pump circulates the coolant in the system.

From the cylinder heads, the heated liquid enters the thermostat box through pipes, from which, depending on the temperature, it is sent to the radiator or to the pump inlet.

Part of the liquid is diverted from the nozzle to the oil-water heat exchanger, in which heat is transferred from the oil to the coolant.

From the heat exchanger, the liquid is directed to the water jacket of the cylinder block in the area where the fourth cylinder is located.

The temperature of the coolant at the engine outlet must be maintained within 85-90 °C.

The thermal regime of the engine is automatically controlled by thermostats and the fan drive hydraulic clutch switch, which control the direction of fluid flow and fan operation depending on the temperature of the coolant at the engine inlet. 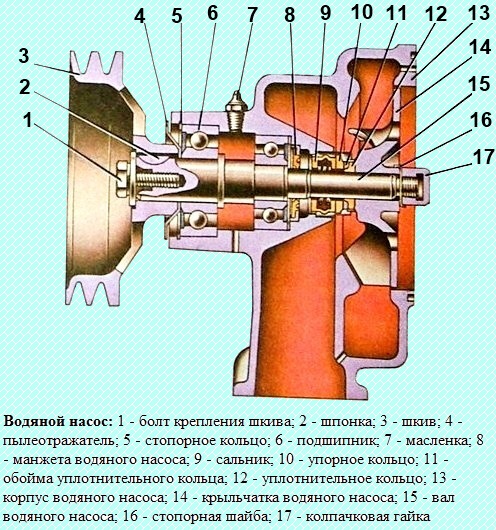 The centrifugal type water pump is mounted on the front of the cylinder block on the left.

The shaft rotates in bearings and with a one-sided rubber seal. For additional protection against the penetration of coolant into the bearings, a rubber cuff is installed.

The stuffing box prevents the coolant from flowing out of the pump cavity.

The stuffing box is pressed into the pump housing, and its graphite ring is constantly pressed against the steel thrust ring by a spring.

A sealing rubber ring in a thin-walled brass cage is installed between the thrust ring and the impeller.

High quality manufacturing of the ends of the graphite and thrust ring provides a reliable contact seal of the pump cavity.

During operation, periodically (during seasonal maintenance), Litol-24 grease should be replenished using a grease fitting until it appears from the control hole.

There is a drain hole in the pump housing to check the health of the mechanical seal.

Leaking fluid through this hole indicates a pump seal failure. Blockage of the hole is not allowed, as it leads to failure of the bearings.

Axial-type fan, metal, five-bladed, 660 mm in diameter, is attached with four bolts to the hub of the driven shaft of the fluid coupling.

With motor fan mod. 740.10 is not interchangeable.

The casing is stamped from sheet metal.

The radiator is four-row, to increase heat transfer, the cooling tapes are made with louvered slots, it is attached with side brackets through rubber cushions to the frame side members, and by the lower link to the first frame cross member.

The radiator shutters are installed in front of the radiator. The blinds are controlled by the drive rod handle located on the instrument panel.

When the handle is fully recessed, the blinds are open, when fully extended, they are closed.

The expansion tank is installed on the engine on the right side along the vehicle and is connected by a bypass pipe to the water pump inlet, a vapor-air pipe to the upper radiator tank and a pipe for draining liquid from the compressor.

The expansion tank is used to compensate for changes in the volume of the coolant when it expands from heating, and also allows you to control the degree of filling of the cooling system and helps to remove air and steam from it.

The expansion tank is made of translucent propylene copolymer. 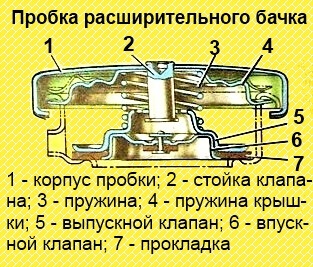 A cork of the expansion tank with inlet (air) and outlet (steam) valves is screwed onto the neck of the tank.

It is not allowed to operate the vehicle without the expansion tank plug. 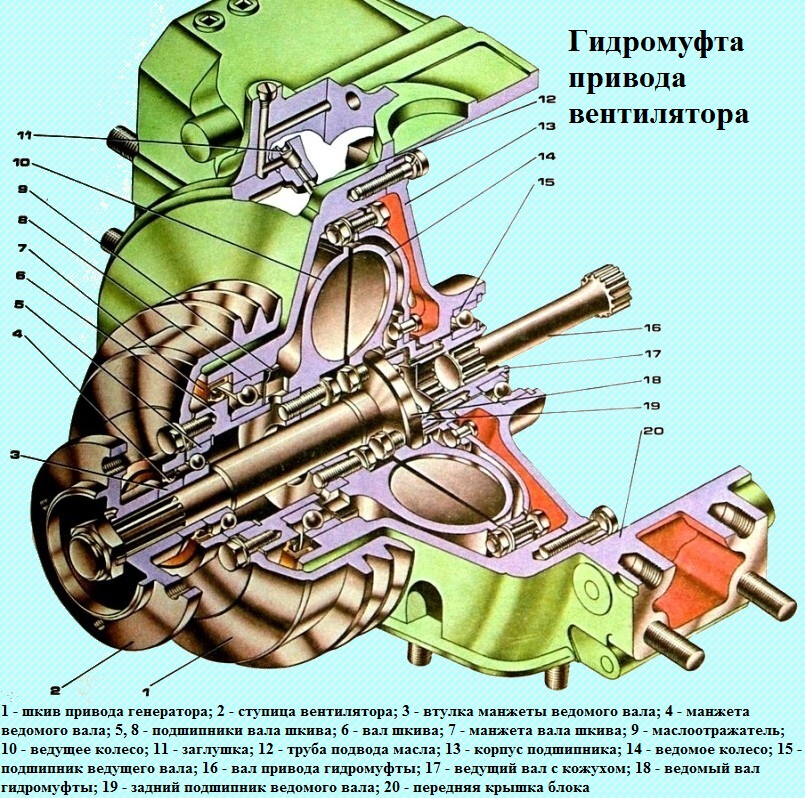 The fan drive fluid coupling (see figure) transmits torque from the crankshaft to the fan and dampens inertial loads that occur when the crankshaft speed changes abruptly.

The fluid coupling is located coaxially with the crankshaft.

The front cover of the block and the bearing housing are connected by screws and form a cavity in which the fluid coupling is installed.

The drive shaft assembly with the casing, the drive wheel, the shaft and the pulley, connected by bolts, make up the driving part of the fluid coupling, which rotates in ball bearings.

The driving part of the fluid coupling is driven by the crankshaft through the splined shaft.

The driven wheel assembly with the shaft, on which the fan hub is fixed, constitute the driven part of the fluid coupling, which rotates in ball bearings. The fluid coupling is sealed with rubber cuffs.

Radial blades are cast on the inner toroidal surfaces of the driving and driven wheels.

There are 33 of them on the drive wheel, 32 on the driven wheel. The interblade space of the wheels forms the working cavity of the fluid coupling.

The hydraulic clutch switch controls the operation of the fan drive fluid clutch.

Through it, the oil enters the fluid coupling.

The switch is installed in front of the engine on the branch pipe that supplies coolant to the right row of cylinders.

The switch has three fixed positions and provides fan operation in one of the modes:

- automatic - the switch lever is set to position "A" (see picture).

When the temperature of the coolant surrounding the thermal power sensor rises (Fig. Fluid coupling switch), the active mass in its cylinder begins to melt, which, increasing in volume, moves the sensor piston and ball.

At a liquid temperature of 86-90°C, the ball opens the oil channel in the switch housing.

Oil from the main line of the engine through the channels in the switch housing, block and its front cover, tube and channels in the drive shaft enters the working cavity of the fluid coupling. In this case, the torque from the crankshaft is transmitted to the fan impeller.

When the coolant temperature is below 86 °C, the ball, under the action of a return spring, closes the oil channel in the housing, and the oil supply to the fluid coupling stops.

At the same time, the oil in the hydraulic coupling is drained through the hole in the casing into the engine crankcase and the fan is turned off;

The position of the fan drive hydraulic clutch switch): no oil is supplied to the hydraulic clutch, while the impeller can rotate at a low frequency under the action of friction forces arising from the rotation of the bearings and the fluid clutch cuff;

- the fan is constantly on - the switch lever is set to the "P" position; in this case, oil is constantly supplied to the hydraulic coupling, regardless of the temperature of the coolant, the fan blades rotate constantly at a frequency approximately equal to the engine crankshaft speed.

The main operating mode of the fluid coupling is automatic. 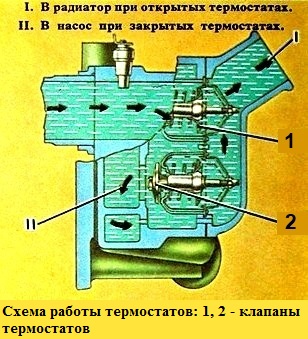 Thermostats (see figure) with a solid filler and a direct valve stroke are designed to automatically adjust the thermal regime of the engine, placed in a box (fig. Cooling system diagram) mounted on the front end of the right row of the cylinder block.

When the coolant temperature reaches 80°C, the active mass enclosed in the cylinder melts, increasing in volume, and squeezes out the rod. In this case, the cylinder is a valve, and the valve closes the fluid inlet to the bypass pipe to the water pump.

Coolant begins to circulate through the radiator.

In the temperature range of 80-93°C, the valves are partially open, the coolant passes through the radiator and bypass pipe to the pump inlet.

At a temperature of 93 °C, the valve opens completely and the other valve closes, while all the liquid circulates only through the radiator.

When the temperature of the coolant drops to 80°C and below, the volume of the active mass decreases and the valves take their original position under the action of the thermostat springs.

The temperature of the coolant in the system is controlled by the indicator on the instrument panel.

When the temperature in the cooling system rises to 98-104°C, the control lamp for emergency overheating of the coolant lights up on the instrument panel.

The engine is filled with coolant through the filler neck of the expansion tank.

Before filling the cooling system, you must first open the tap of the heating system.

Checking the fluid level is done visually on a cold engine.

The normal level should be between the "MIN" and "MAX" marks on the side of the tank.

To drain the coolant, open the drain valves of the lower elbow of the water pipeline, the heat exchanger and the pump unit of the preheater, the supply pipe of the cab heater and unscrew the plug of the expansion tank.