The lubrication system provides oil supply to the rubbing surfaces of parts, which reduces friction between them and their wear, and also reduces the loss of engine power to overcome friction forces

During the operation of the engine, the oil introduced between the parts circulates continuously; at the same time, it cools the parts, protects them from corrosion and carries away wear products.

A thin layer of oil on pistons, piston rings and cylinders not only reduces wear, but also improves engine compression.

The lubrication system of a KamAZ vehicle is combined. This means that oil is supplied to the rubbing parts in several ways: under pressure, splashing and gravity.

Oil under pressure is injected into the gaps between the most loaded friction parts: 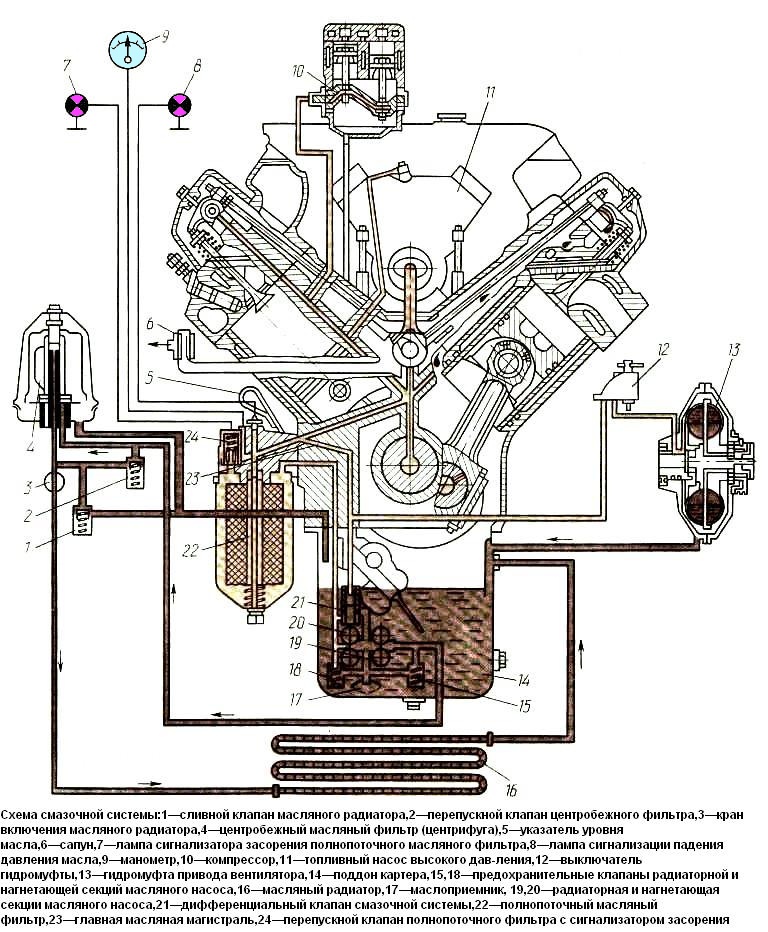 The lubrication system consists of an oil pump installed on the lower plane of the crankcase inside the sump 14 (Fig. 1.), a full-flow oil filter 22, a centrifugal oil filter (centrifuge) 4, an oil line 23 with channels, a radiator 16, an oil filler neck, oil level indicator.

The oil pan is the oil reservoir.

Oil is poured into it through the neck to the level of the upper mark on the level indicator (dipstick). The lower mark indicates the minimum allowable amount of oil.

The deep part of the sump of KamAZ vehicles with a 6X4 wheel arrangement is located at the rear of the engine, on KamAZ-4310, -43105 vehicles - at the front of the engine. This is due to the layout of the cars.

During engine operation, oil from the sump 14 through the mesh oil receiver 17 is sucked in by a two-section pump. From here, a smaller part of the oil through the channels of the crankcase and the front cover of the block is constantly pumped by the radiator section into the centrifuge 4.

The oil purified by the centrifuge enters the radiator 16 through valve 3, where it is cooled and then drained into the sump.

When tap 3 is closed or the oil pressure in the radiator rises to 50...70 kPa, it flows from the centrifuge through the opened drain valve into the sump, bypassing the radiator.

Most of the oil enters the suction cavity of the oil pump discharge section from the sump and is fed by its gears to the full-flow filter 22, where it is cleaned, passing through two filter elements connected in parallel, and then enters the main line 23 through the channel in the block.

From this line, oil is supplied through channels in the partitions and walls of the cylinder block to the main bearings of the crankshaft, camshaft bearings and bushings of the rocker arms of the gas distribution mechanism.

The oil squeezed out of the gaps is sprayed by the rotating parts of the crank mechanism, and an oil mist is formed, which settles on the surface of the cylinder liners, pistons, pushers and other parts and thus lubricates them.

The oil removed from the cylinder walls by the oil scraper ring is discharged into the piston and lubricates the piston pin bearings in the bosses and the connecting rod bearing.

Through the channels in the short arms of the rocker arms of the gas distribution mechanism and in the adjusting screws, oil is supplied to the upper tips of the rods.

Flowing down the rods, it lubricates their lower tips, pushers, and then enters the sump.

The rocker noses and valve stems are lubricated with oil, which flows out of the gaps of the rocker arm bushings and is sprayed by moving parts, then it is discharged along inclined channels into the cavity for the rods and then into the sump.

Part of the oil from the main line through the channel in the cylinder block and the tube is supplied to the cavity of the high-pressure fuel pump, lubricates its bearings and parts of the speed controller, and then enters the engine crankcase through the drain tube.

From the main line, oil is pumped both to the bearings of the turbochargers and to the crankshaft of the air brake compressors.

There is also a constant supply of oil under pressure to switch 12 of the fan drive fluid coupling.

When the switch is open, the oil enters the working cavity of the fluid coupling 13, from where it drains into the sump crankcase.

The oil pressure in the system is controlled by pressure gauge 9 on the instrument panel in the cab.

In addition, there is an emergency pressure alarm. When it becomes less than 70 kPa, the red light 8 lights up on the pressure gauge. In this case, it is necessary to stop the engine and identify the cause of the malfunction.

Lamp 7 serves to signal the maximum clogging of the filter elements of the oil filter 22.

The constant glow of this lamp indicates that the bypass valve has opened and the crude oil enters the main line bypassing the filter elements.

Short-term (until the engine warms up) burning of the signal lamp 7 is allowed, with its constant glow, it is necessary to replace the filter elements.

Valves of the lubrication system. Oil is supplied to the rubbing parts under a certain pressure. If it is not enough, then due to a decrease in the flow velocity in the gaps, the washing out of wear products from them and the cooling of parts worsen.

Excessive pressure increases the load on the assembly units of the lubrication system and the energy consumption of the oil pump drive.

The oil pressure in the line depends on the speed of the crankshaft, oil temperature, degree of wear of parts, resistance of oil filters, radiator, etc.

So that normal operation is not disturbed by changing these factors, the system is equipped with automatically operating plunger valves.

There are six of them in total: three at the oil pump - safety and 2 (Fig. 2.), respectively, radiator and discharge sections and valve 7; the centrifuge has drain 12 and bypass 11 valves and one bypass valve 5 for the full-flow oil filter.

According to the principle of operation, the differential valve is a plunger with an annular groove A.

On the one hand, it is loaded with the force of oil pressure from the main line, and on the other - with a spring.

At the same time, the pressure force transmitted directly from the injection section of the oil pump through channel B to groove A does not disturb the balance, since it acts on the end surfaces of the groove that are equal in area.

When the pressure in the main line exceeds the allowable one, the valve, overcoming the resistance of the spring, will shift and the groove A will connect the channels B and B, as a result so that the oil from the pump will freely drain through the channel B into the sump.

The bypass valve 5 comes into operation when the filter elements of the full-flow filter 4 are clogged.

When the filter resistance exceeds the pressure drop value, the valve opens and part of the oil is bypassed into the main line bypassing the filter.

Thus, when the bypass valve is activated, accidental engine damage is prevented, but at the same time, wear of parts due to the supply of crude oil to them increases.

For the driver to be aware of this, there is a contact device in the bypass valve that turns on lamp 6 on the instrument panel in the cab, indicating that the engine is running on unrefined oil.

From the side of the discharge cavity, the oil pressure force acts on the valve, and from the opposite side, the spring force.

When the pressure force exceeds the resistance of the spring (for example, when pumping cold oil when starting a cold engine), the valve will open and transfer excess oil into the suction cavity, reducing the load on the pump parts.

To ensure the normal operation of the centrifuge, a sufficiently high pressure of the oil entering it is required, therefore, the bypass valve 11 is adjusted to an opening pressure of 600...650 kPa.

To prevent the destruction of the thin-walled tubes of the oil cooler, the oil pressure in its line must be significantly lower, so the drain valve 12 opens at a pressure of 50-70kPa.