The alternator provides power to the vehicle when the engine is running. The main parts of the generator are the stator and the rotor

On the inside of the stator teeth, there are 18 coils made of insulated copper wire and connected in series of six pieces in three groups.

The groups are connected according to the "star" scheme, three outputs from which go to the rectifier unit. 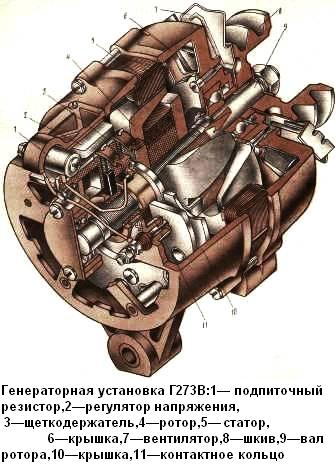 The rotor is a steel shaft, on the corrugated surface of which two six-pointed steel magnetic cores are pressed.

Between them, an excitation winding made of insulated copper wire is installed on a steel sleeve.

There are two copper slip rings on the rotor shaft, isolated from the shaft and from each other. The ends of the excitation winding are soldered to them.

Copper-graphite brushes are pressed against the slip rings by springs. 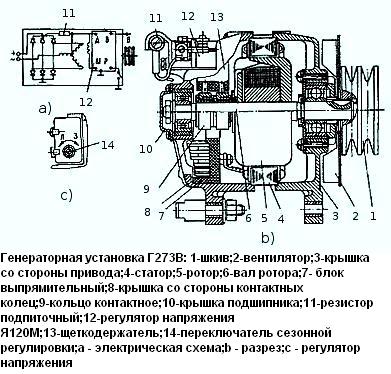 When you turn on the mass of the batteries and the instrument and starter switch to position "1" or "2", the current from the battery passes through the brushes and slip rings into the excitation winding.

A magnetic flux is formed around the screws of the field winding, directed by the magnetic cores of the rotor.

When the rotor rotates, the magnetic flux also rotates with it, which crosses the windings of the stator coils.

They generate an alternating current (if the circuit is closed), going to the rectifier unit.

In this block, it is converted into direct current, which goes to all consumers.

The brush holder of the G 273V generator set has a built-in small-sized Ya120M voltage regulator, which is an integrated circuit. It serves to maintain the voltage generated by the generator within the specified limits.

There are four pins on the regulator.

With these terminals, the regulator is installed in the brush holder so that the terminals marked with the letters Ш, Д, В and Р lie on the conductive busbars.

The brush holder also has a make-up resistance, which serves to ensure reliable excitation of the generator at the engine idle speed.

The screw 10 of the seasonal voltage regulation regulator is placed on the brush holder housing. The screw has two positions: "L" - summer, "3" - winter.

When the screw is set to position "3", the voltage maintained by the regulator is 1.5...3.0 V higher than with summer regulation, which is necessary to improve battery charging with an increase in their internal resistance in winter conditions. 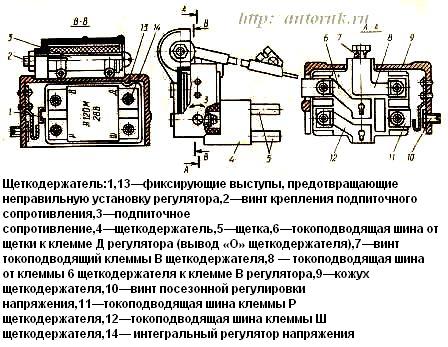 The G 288 alternator with electromagnetic excitation is also a three-phase twenty-pole electric machine with a built-in rectifier.

The voltage regulator built into the generator brush holder is assembled according to an integrated circuit and serves to automatically maintain the generator voltage within the specified limits necessary to ensure the charging mode of the battery and the operation of consumers.

The voltage regulator has a seasonal adjustment switch (see fig. 2).

The generator is located in the upper front part of the engine and is attached with two legs to the bracket, and the third one - to the tension bar, it is driven by two V-belts.

The generator has the following outputs: 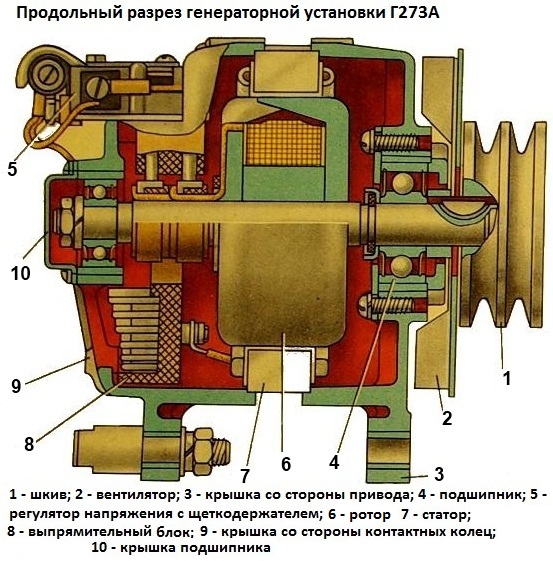 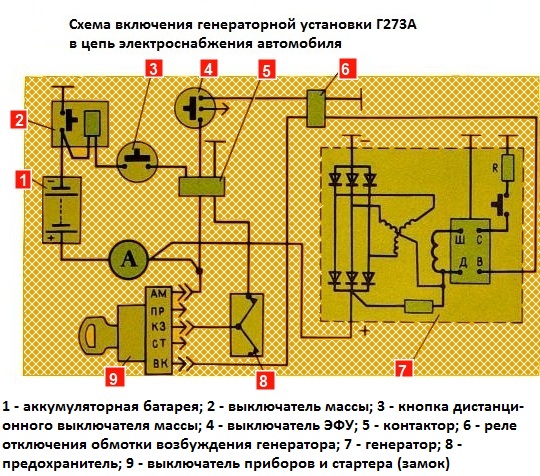 Generator to be replaced: 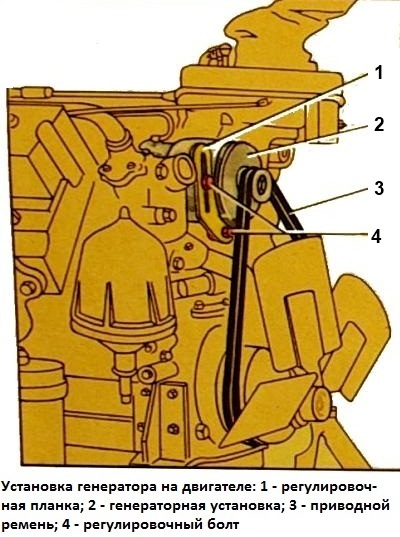 Raise the cabin to the first position

Disconnect the plug and electrical wires from the generator outputs

Turning the generator down, loosen the drive belts

We install the generator on the bracket, put a spring washer on the stud, screw the nut by hand and screw in the coupling bolt

We install drive belts in the pulley streams

We screw, without tightening, the bolts of the tension bar

Moving the generator up, tighten the belts

We tighten the bolts of the tension bar, tighten the nut of the stud that secures the generator to the bracket and the coupling bolt of the split support

A correctly tensioned belt, when pressed on the middle of the largest branch with a force of 39.2 N (4 kgf), should have a deflection of 15-22 mm

Connect the wires to the generator leads and the plug 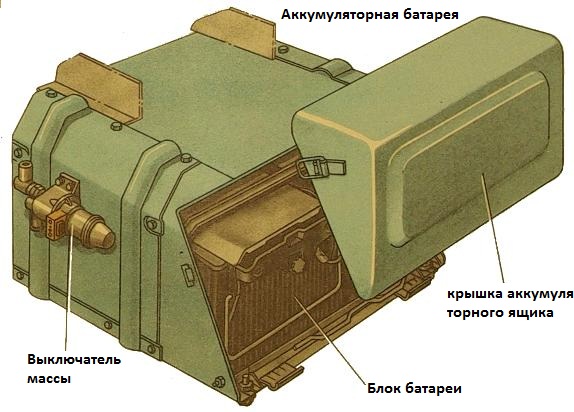 Lead-acid batteries with a voltage of 12 V and a capacity of 190 Ah.

Two batteries are connected in series and provide 24 V.

Each battery consists of six cells interconnected by interconnects with copper inserts to reduce internal resistance.

Several factories make such batteries. The manufacturer's trademark is applied to the intercell connection between the third and fourth batteries.

We remove the batteries for replacement and recharging or for repairs

Loosen the nuts of the tie rods for fastening the clamping frames of the batteries, remove the frame

Remove the batteries from the car (remove with an assistant)

Install the batteries in the box

The batteries are connected in series

We connect the negative terminal through the battery switch

Conclusions are covered with grease VTV-1

Installing and fixing the protective strips

Install the battery covers and secure them with clamping frames