The engines use a split-type fuel supply system, consisting of a model 337 injection pump with a speed controller, a fuel priming pump, injectors, coarse and fine filters, a pre-start pump, high and low pressure fuel pipes, a solenoid valve and flare candles EFU. 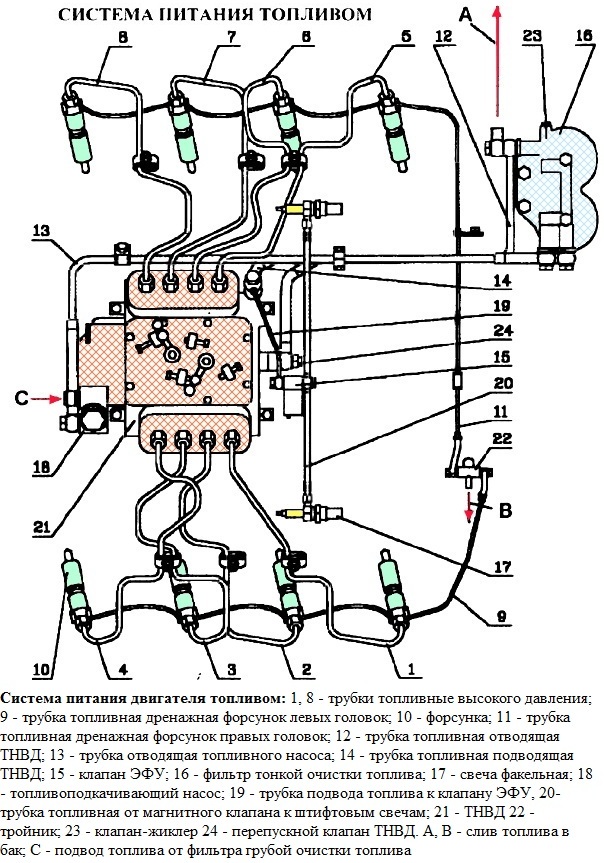 Scheme of the fuel supply system is shown in Figure 1.

A fuel pre-filter and a fuel pre-priming pump must be installed in the fuel supply system of the facility where the engine is used.

Fuel from the tank is supplied through a coarse filter and a pre-start pump 18 by a fuel priming pump into a fine filter 16.

Excess fuel, and with it the air that has entered the system through the bypass valve of the injection pump 24 through the pipe 12 and the valve - jet 23 of the fine filter, is discharged into the fuel tank. 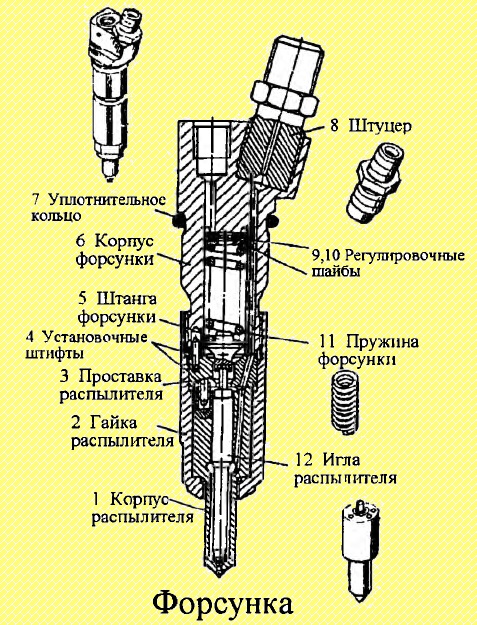 All parts of the injector are assembled in body 6. A spacer 3 and body 1 of the atomizer, inside which there is a needle 12, are attached to the lower end of the injector body with a nut 2.

The body and needle of the atomizer are a precision pair. The atomizer has five spray holes.

Space 3 and body 1 are fixed relative to body 6 with pins 4.

Spring 11 rests at one end against rod 5, which transmits force to the sprayer needle, and at the other end against a set of adjusting washers 9, 10.

Fuel is supplied to the injector at high pressure through fitting 8 with a slotted filter 13 built into it, then through the channels of body 6, spacer 3 and atomizer body 1 - into the cavity between the atomizer body and needle 12 and, raising it, is injected into the cylinder .

The fuel leaking through the gap between the needle and the atomizer body is discharged through the channels in the nozzle body and drained into the tank through the drain drain pipes 9 and 11 (see Fig. Engine fuel supply system).

The injector is installed in the cylinder head and secured with brackets. The end face of the atomizer nut is sealed against gas breakthrough with a corrugated copper gasket.

O-ring 7 protects the cavity between the nozzle and the cylinder head from dust and water.

In view of the possibility of engine failure, it is strictly forbidden to install nozzles of other models than those specified in the manual. 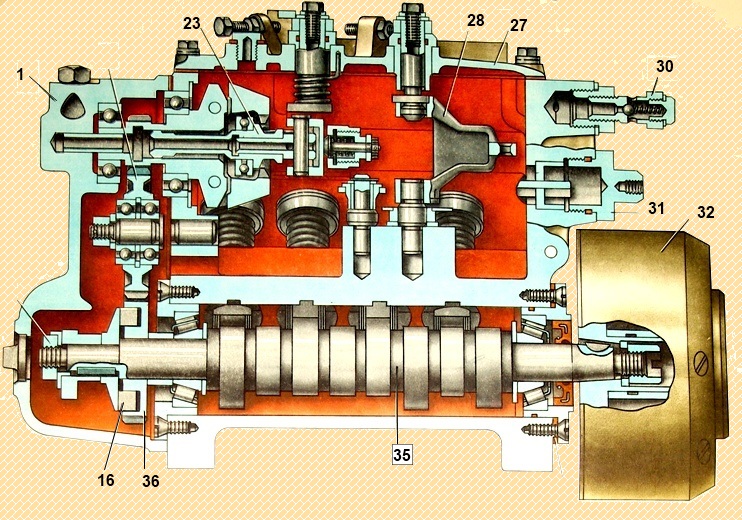 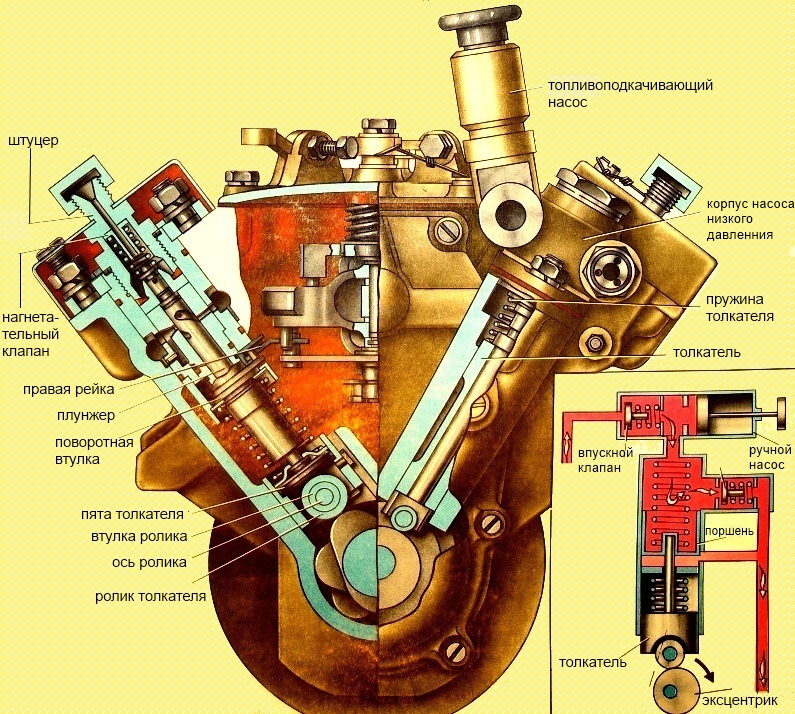 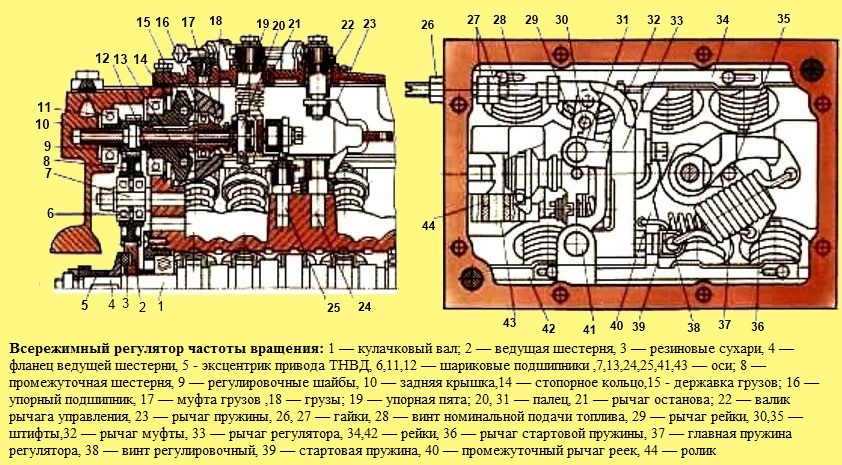 The high-pressure fuel pump is equipped with an automatic fuel injection advance clutch (AMOVT) with a nominal angle of rotation of the driven half-coupling relative to the leading one - 1 °.

The injection pump is equipped with an AMOVT with a nominal angle of rotation of the driven coupling half relative to the leading one - 4°30.

Eight sections are installed in the injection pump housing 1, which consist of a housing 6, a plunger bushing 8, a plunger 7, a rotary bushing 4, a discharge valve 10, pressed against the plunger bushing by a fitting 11 through a sealing gasket 12.

The plunger reciprocates under the action of the shaft cam 35 and spring 3.

The pusher is fixed in the housing with crackers 49.

The camshaft rotates in 34 roller bearings mounted in covers and attached to the pump casing. The axial clearance of the camshaft is regulated by gaskets 33. The clearance should be no more than 0.1 mm.

To increase the fuel supply, the plunger 7 is rotated by the sleeve 4 connected through the axis of the leash to the rail 5 of the pump.

The rail moves in the guide bushings 30. Its protruding end is closed with a plug 31.

On the opposite side of the pump there is bolt 48, regulating the fuel supply by all sections of the pump, the bolt is closed with a plug and sealed.

Fuel is supplied to the pump through a special fitting, to which a low-pressure pipe 14 is attached with a bolt. Further, through the channels in the housing, the fuel enters the inlet openings of the bushings 8 of the plungers.

A bypass valve 29 is installed at the front end of the housing at the point where the fuel exits the pump, which provides pressure in the low pressure line at operating modes of 0.13-0.19 MPa (1.3-1.9 kgf/cm2 ).

The opening pressure of the valve is adjusted by selecting shims 50 inside the valve plug.

The lubrication of the pump is circulating, pulsating, under pressure from the general lubrication system of the engine.

Regulator speed - all-mode, direct action, changes the amount of fuel supplied to the cylinders, depending on the load, maintaining a given crankshaft speed. 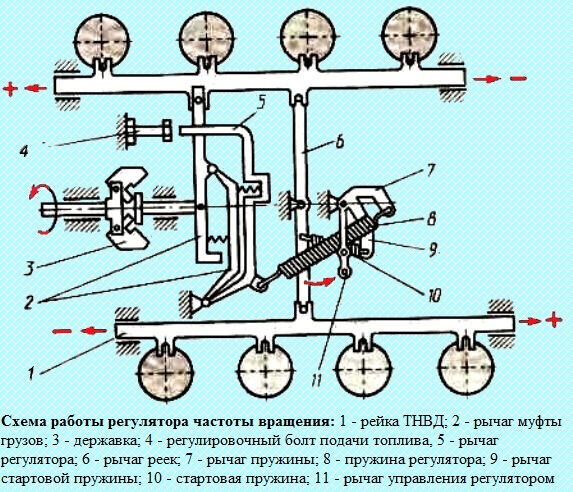 On the cam shaft of the pump there is a drive gear wheel 36 of the regulator, the rotation of which is transmitted through rubber crackers 16.

The driven gear is made as one piece with a holder of 19 weights, rotating on two ball bearings.

When the holder rotates, the loads 22, swinging on the axes 20, diverge under the action of centrifugal forces and move the clutch 23 through the thrust bearing 21.

The clutch, resting against the pin 24, in turn, moves the load clutch lever 45. One end of the lever is fixed on the axis 46. and the other is connected to the fuel pump rail through the pin. 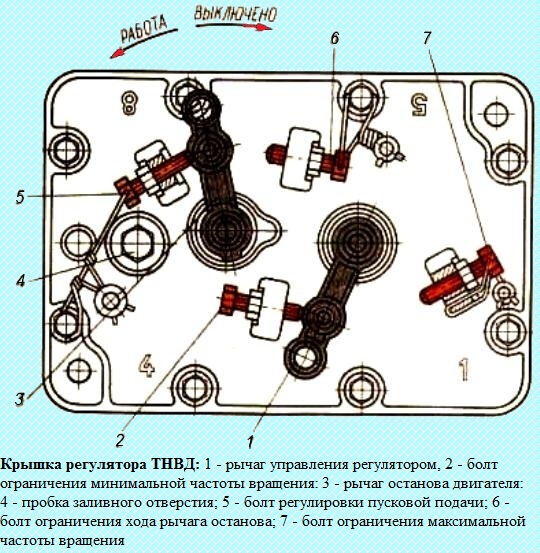 The fuel supply is stopped by turning the lever 3 (Fig. High pressure fuel pump regulator cover) to stop the engine until it hits the bolt 6.

At the same time, lever 3, having overcome the force of spring 8 (fig. diagram of the operation of the speed controller), will turn levers 2 and 5 through pin 47 (fig. high-pressure fuel pump), the rail will move until the fuel supply is completely cut off.

When the force is removed from the engine stop lever, it will return to its working position under the action of spring 25 (fig. HPFP). 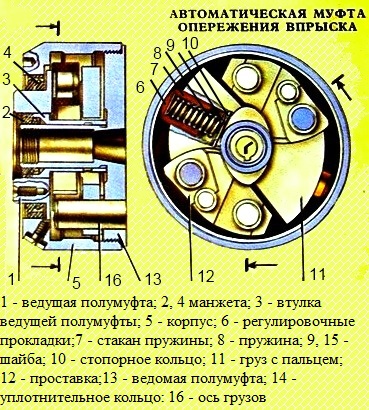 The clutch sets the start of fuel supply, optimal for the working process, in the entire range of speed modes. This ensures an acceptable level of emissions of harmful substances with exhaust gases, acceptable efficiency and rigidity of the process at various speeds of the engine.

The driven half-coupling 13 is fixed on the conical surface of the front end of the camshaft of the high-pressure fuel pump with a key and a nut with a washer, the driving half-coupling 1 - on the driven hub (can be rotated on it).

Sleeve 3 is installed between the hub and the coupling half.

Loads 11 swing on axles 16 pressed into the driven coupling half in a plane perpendicular to the axis of rotation of the coupling.

Spring 8 strives to keep the load in the stop position in the sleeve 3 of the leading coupling half.

When the speed of the engine crankshaft (high-pressure fuel pump camshaft) increases, the loads diverge under the action of centrifugal forces, as a result of which the driven half-coupling rotates relative to the leading one in the direction of rotation of the camshaft, which causes an increase in the fuel injection advance angle.

WARNING! Checking and adjusting the injection pump, as well as replacing the plunger pairs, sealing gaskets of the injection pump sections must be carried out in a specialized workshop and by a qualified specialist.

IT IS STRICTLY FORBIDDEN to install injection pump models that do not correspond to this engine model, due to a deterioration in the quality of the engines working process, an increase in the emission of harmful substances with exhaust gases, exhaust smoke and in order to avoid premature engine failure 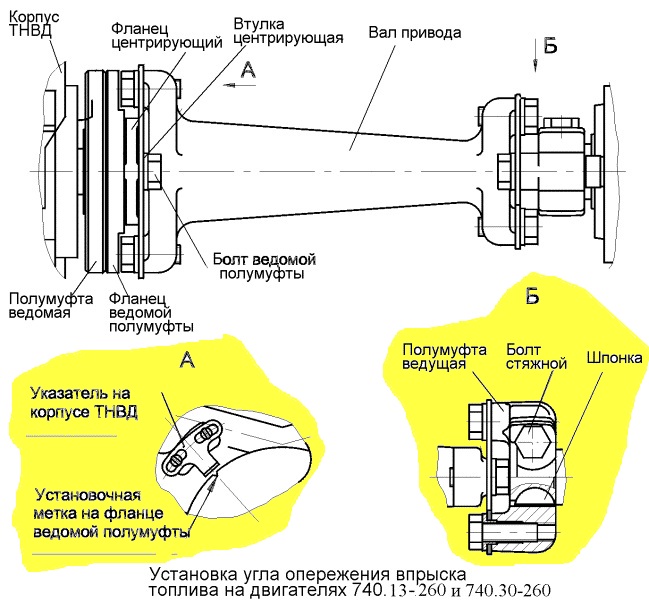 The drive is equipped with 5 rear and front plates 0.5 mm thick each, made of 65 G steel. 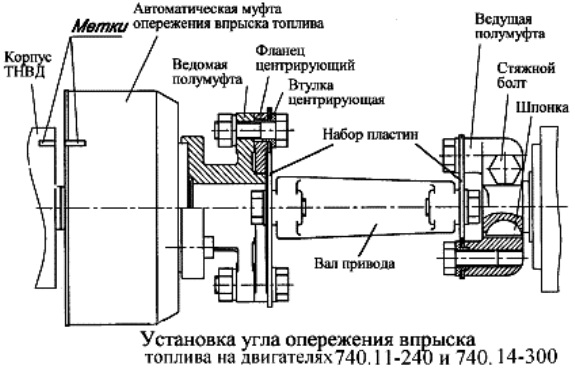 All bolts in the injection pump drive must be of strength class R100 and be screwed with a torque of 6.5-7.5 kgf.m. All bolts must be checked for tightness with a torque wrench. Before installing the bolts, check the presence of the centering sleeves.

WARNING! Spring washers are installed only under the nuts for fastening the plates to the driven coupling half.

Deformation (bending) of the front and rear plates is not allowed. The coupling bolt of the drive coupling half of the injection pump drive is tightened last. 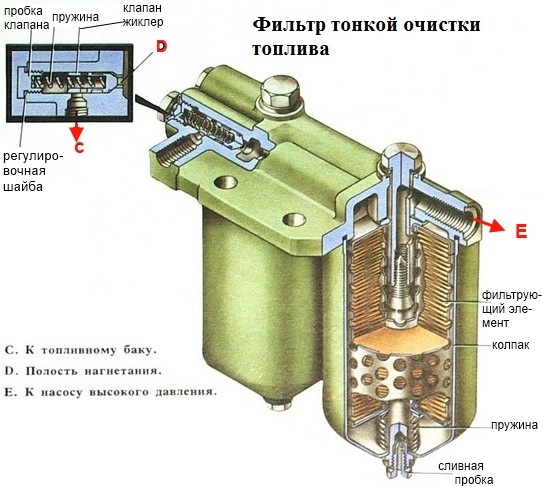 It is installed at the highest point of the fuel supply system to collect and remove air into the tank along with part of the fuel, through a valve - a jet installed in the filter housing.

The pump is installed on the rear cover of the regulator, it is driven from the eccentric of the injection pump camshaft.

In the pump housing there are: a piston, a piston spring, a rod sleeve and a pusher rod, inlet and discharge valves with springs.

The eccentric of the camshaft of the injection pump through the roller, the pusher 15 and the rod reciprocates the piston of the low-pressure fuel pump.

The pump operation diagram is shown in the figure below.

When the pusher is lowered, the piston 10 moves down under the action of the spring 4. A vacuum is created in cavity "A" and inlet valve 3, compressing spring 2, passes fuel into the cavity.

At the same time, the fuel in the injection cavity "B" is displaced into the line, bypassing the delivery valve 8, connected by channels to both cavities. In the free position, the discharge valve closes the channel of the suction cavity.

When the piston 10 moves upwards, the fuel filling the cavity "A" through the discharge valve 8 enters the cavity "B" under the piston, while the inlet valve closes.

When the pressure in the discharge line increases, the piston does not make a full stroke after the pusher, but remains in a position that is determined by the balance of the fuel pressure force on the one hand, the spring force on the other.

Piston-type pre-fuel pump is used to fill the fuel system with fuel before starting the engine and remove air from it.

The pump is installed in the products fuel system. The pump consists of a body, a piston, a cylinder, a handle assembly with a rod, a support plate and a seal.

The fuel system should be primed with a pre-priming pump. 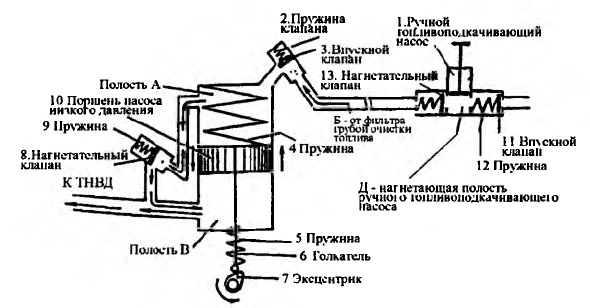 When moving up, a vacuum is created in the space under the piston. Inlet valve 11 (see figure), compressing spring 2, opens and fuel enters the pump cavity.

When the handle moves down, the discharge valve 13 opens, and fuel under pressure enters the discharge line, ensuring the removal of air from the engine fuel system through the FTOT jet valve and the injection pump bypass valve.

After bleeding the system, lower the handle and lock it by turning it clockwise. In this case, the piston will press against the rubber gasket, sealing the suction cavity of the low pressure fuel pump.

WARNING! It is not allowed to start the engine with the handle not fixed due to the possibility of air leakage through the piston seal.

The low-pressure fuel lines are made of a 10x1 mm steel pipe with brazed ends.

High-pressure fuel pipes of equal length (1 = 615 mm) are made of steel pipes with an internal diameter of 2 + 0.05 mm by upsetting at the ends of the connecting cones with compression washers and union nuts for connection with the fittings of the injection pump and injectors.

In order to avoid damage from vibration, the fuel pipes are additionally fixed with brackets to the intake manifolds.