The drive is divided into self-contained circuits separated by protective valves. Each circuit operates independently of the others. 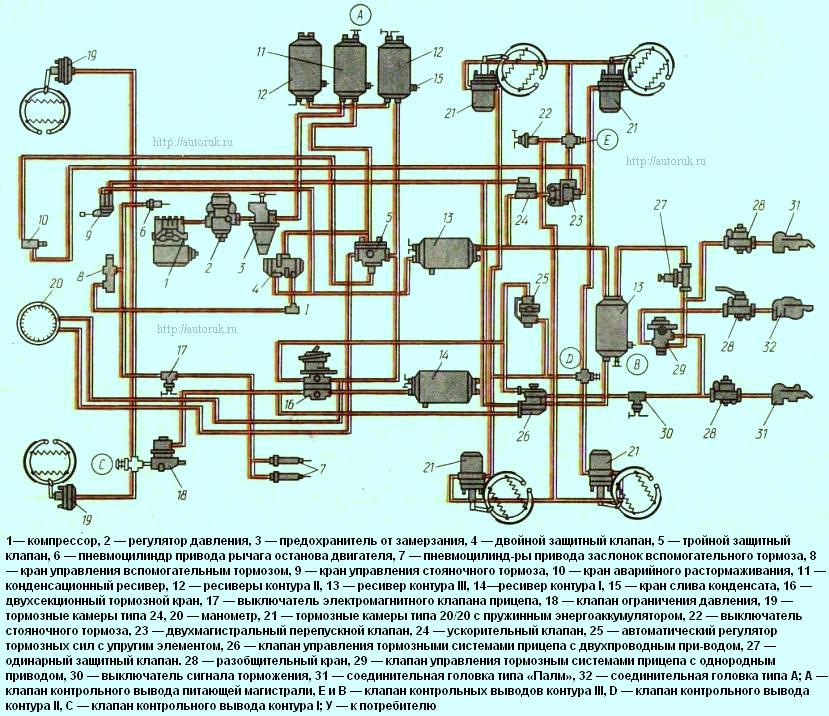 Fig.1. Pneumatic drive of the brake mechanisms of the KAMAZ-5320 car

Circuit I of the drive mechanism of the service brake of the front axle consists of a part of a triple protective valve 5, a receiver 14 with a volume of 20 l with a condensate drain valve and a switch for the pressure drop warning lamp in the receiver, a part of a two-pointer pressure gauge 20, a lower section of a two-section brake valve 16, a valve From the control output, pressure limiting valve 18, two brake chambers 19, front axle brakes, pipelines and hoses between these devices.

In addition, the circuit includes a pipeline connecting the lower section of the brake valve 16 with the trailer brake control valve 26 with a two-wire drive.

Circuit II of the drive of the rear bogie service brake mechanism consists of a part of a triple safety valve, two receivers 12 with a total volume of 40 liters with condensate drain valves 15 and a switch for the warning lamp for pressure drop in the receiver, part of a two-pointer pressure gauge 20, the upper section of a two-section brake valve 16 , control output valve D, automatic brake force regulator 25 with elastic element, four brake chambers 21, brake mechanisms.

The circuit also includes a pipeline connecting the upper section of the brake valve 16 with the trailer brake control valve 26.

The circuit III of the drive mechanisms of the spare and parking brakes, as well as the combined drive of the brake systems of the trailer (semi-trailer) consists of a part of a double safety valve 4, two receivers 13 with a total volume of 40 liters with a condensate drain valve and a switch for the warning lamp for pressure drop in the receiver, two valves E and B of the control outputs, a parking brake control valve 9, an accelerating valve 24, a part of a two-line bypass valve 23, four spring-loaded energy accumulators 21, a switch 22 of the parking brake warning lamp, a trailer brake control valve 26 with a two-wire drive, a single safety valve 27 , a valve 29 for controlling the brake systems of a trailer with a single-wire drive, three uncoupling valves 28, three connecting heads (one head 32 type A for a single-wire drive of trailer brake systems and two heads 31 of the Palm type for a two-wire drive for trailer brake systems), pneumoelectric brake light switch 30, pipelines and hoses between these devices.

The circuit IV of the drive of the auxiliary brake mechanisms and other consumers consists of a part of a double protective valve 4, a pneumatic valve 8, two cylinders 7 of the damper drive, a pneumatic cylinder 6 of the drive of the engine stop lever, a pneumoelectric switch 17 of the trailer solenoid valve, pipelines and hoses between these devices.

Circuit IV does not have its own receiver and pressure drop control lamp. 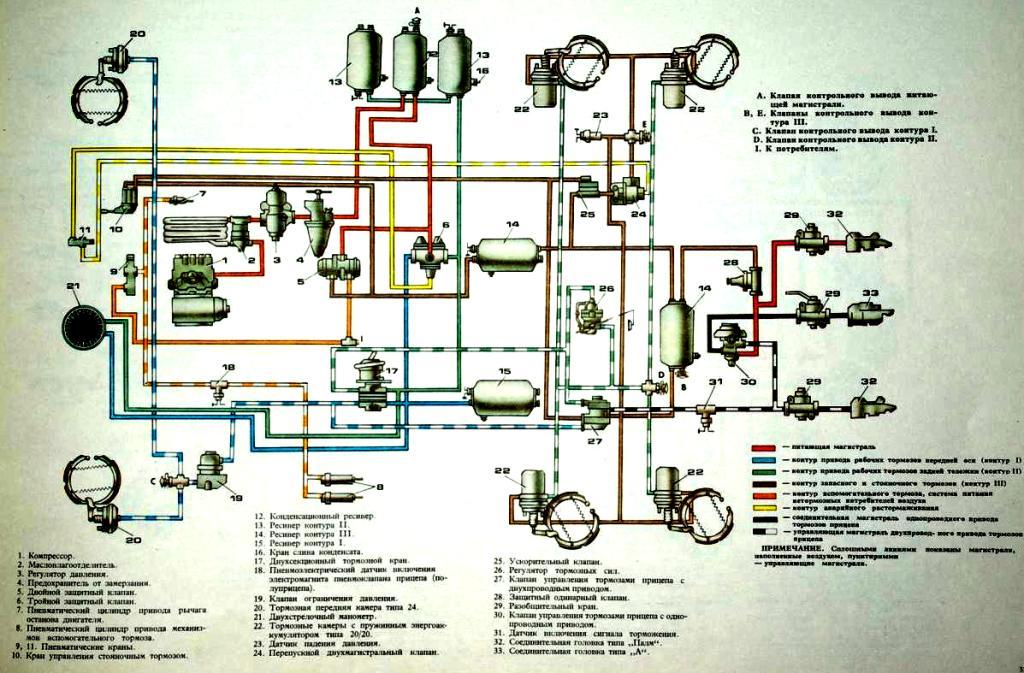 When describing the components and the principle of operation, the pneumatic drive of the KAMAZ-5320 car was taken as the basis. However, you should be aware that the brake actuators of other cars have their own distinctive features.

To improve moisture separation in the supply part of the brake drive of the KamAZ-53212 car, a dehumidifier was additionally installed on the first cross member of the frame in the zone of intensive airflow in the compressor-pressure regulator section.