Conventionally, the system of an electric torch device can be divided into two interconnected ones: fuel and electric.

The fuel system also provides the dosage of diesel fuel for combustion.

It is connected to the engine fuel supply system.

The main element of the electric torch device is torch candles.

They are installed in the intake pipes of the engine so that a uniform supply of heated air and fuel vapors to all cylinders is ensured.

The body 1 of the flare candle (Fig. 1) is of a non-separable design, has a lower threaded part for screwing into the inlet pipeline and fixing it with a lock nut 6.

Heating element 2 is made in the form of a pin candle and is a metal casing, inside of which a spiral is pressed in a special filler.

The filler has good thermal conductivity and electrically insulates the coil from the casing.

The heating element heats the spark plug to operating temperature, which ensures the evaporation and ignition of diesel fuel.

Fuel comes from the power system to the fitting, where it is cleaned by filter 7, and then enters the annular cavity formed by the surface of the heating element and evaporator 5. The amount of fuel is dosed by jet 8.

To increase the evaporation surface, a three-dimensional mesh 4 is used, surrounded by a screen 3 with two rows of holes.

The screen protects the flame from being blown away by the air flow sucked into the engine cylinders.

Before starting the engine, an excess fuel pressure is created using a manual fuel priming pump, which is maintained by the fuel pump during the crankshaft cranking period.

The jet valve of the fine filter and the injection pump bypass valve, blocking the drain fuel lines, provide fuel supply to the flare candles 13 with a minimum time delay at a pressure of 20...40 kPa.

The fuel passes through the solenoid valve 11 and enters the pre-heated torch candles, where it is dosed, heated and evaporated.

The ignition of the fuel and the formation of a flame torch occur due to the fact that at this moment the engine crankshaft is rotated by the starter and an air flow appears in the intake pipes, blowing the torch candles.

Particles of unburned fuel in the intake pipes in the form of vapors enter the cylinders together with heated air, where they ignite and contribute to the ignition of the main fuel injected through the nozzles.

To reduce the time for the engine to reach a stable mode, it is possible to combine its operation with the operation of an electric torch device. This ensures stable retention of the flame in the intake pipes when the engine is idling. 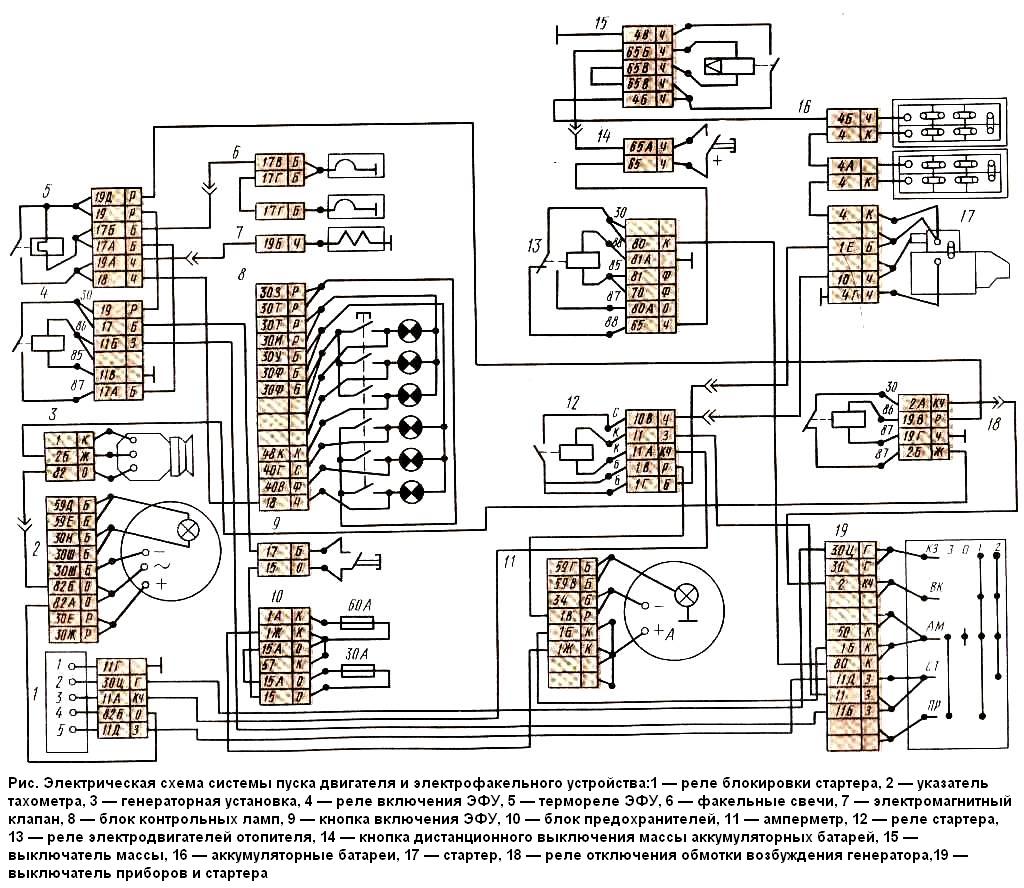 The EFU is powered by the vehicles batteries and includes torch candles 6 (Fig. 2), thermal relay 5, which is used to turn on the electromagnetic fuel valve 7, and the control lamp of the block 8, which indicates that the candles are sufficiently heated and power is supplied to solenoid valve; relay 4, designed to turn on the candles for maximum heating; relay 18 for turning off the excitation winding of the generator for a period of workoty EFU.

To activate the EFU, you need to press the button 14 of the remote start of the ground, then press the button 9 and hold it in this position until the lamp in block 8 lights up, then turn on the starter by turning the switch key 19 to the second position, without releasing the button 9.

Switch 15 is activated and connects the “-” of the batteries to the vehicle ground.

It should be borne in mind that the button 14 must not be kept pressed for more than 2 s, otherwise the electromagnet winding of the switch 15 may overheat.

The normally closed contacts of the relay 13 of the cabin heater electric motors are used to supply current to the solenoid coil of the switch 15. This is done to prevent the possibility of disconnecting the batteries

Simplified EFU connection diagrams (to make it easier to understand how an electric torch device works): 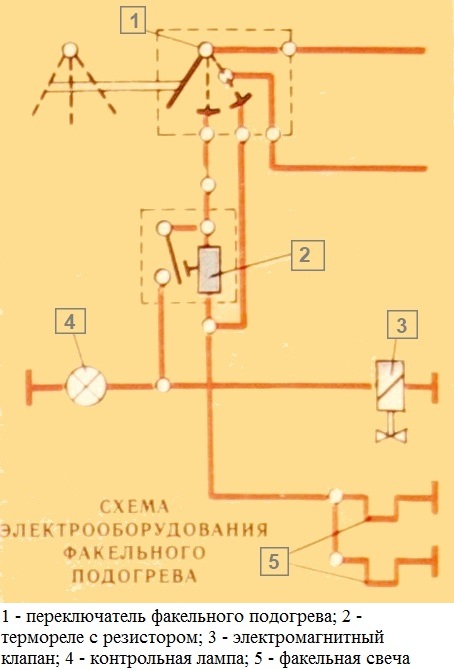 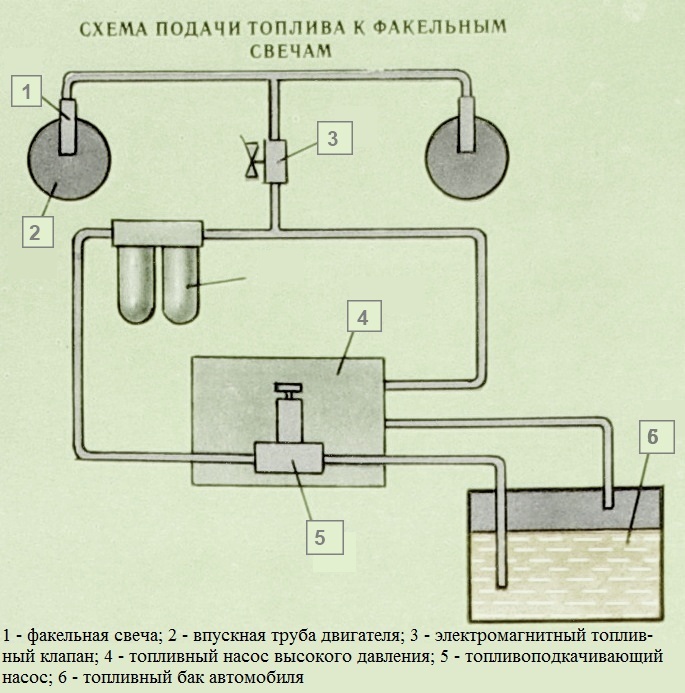 Possible malfunctions of the EFU and methods of elimination

Voltmeter pointer at the bottom of the scale

- Closing the spiral of a thermal relay or electrical wires

If the candles are in good condition, disconnect the wire from the thermal relay that connects it to the power button of the EFU.

The absence of a change in the readings of the arrow indicates the closure of the thermal relay spiral. In this case, replace the thermostat.

If the coil of the thermal switch is intact (determined by touch) and the position of the arrow does not change when the wires are disconnected from the candles, this indicates a short circuit in the electrical wires.

- Closing the spark plug to ground

The absence of the arrow going beyond the scale indicates the closure of the right candle. Replace failed spark plug.

Voltmeter reading does not change

- Burnout of candles or lack of contact in the circuit

Turn on the EFU and check for voltage at the terminals of each EFU item, starting with the flare plugs. The presence of voltage at the output of the right candle indicates the burnout of the candles. Replace the spark plug and reconnect

- Burnout of one of the candles

Turn on the EFU for 10-15 seconds, then change the cold plug

- Lack of fuel supply to the spark plug

Loosen the fuel inlet fitting on the spark plug.

Turn on the EFU and, after the indicator lights up (opening the solenoid valve), turn the crankshaft using the starter.

If the fuel does not seep through the loose fitting threaded connection when the valve is open, repair the fuel supply system malfunction

- Fuel not passing through the spark plug

Unscrew the spark plug from the manifold.

Rinse and blow out jet, fuel filter and fuel cavities with compressed air.

- Leakage of the fuel supply system

The operation of the EFU should be checked with good and charged batteries in the following order:

When the EFU is turned on again, the signaling device’s ignition time is reduced, therefore, in order to obtain a reliable value, it is necessary to allow the thermostat to cool down to the ambient temperature:

If there is no flame, then replace the faulty candle. 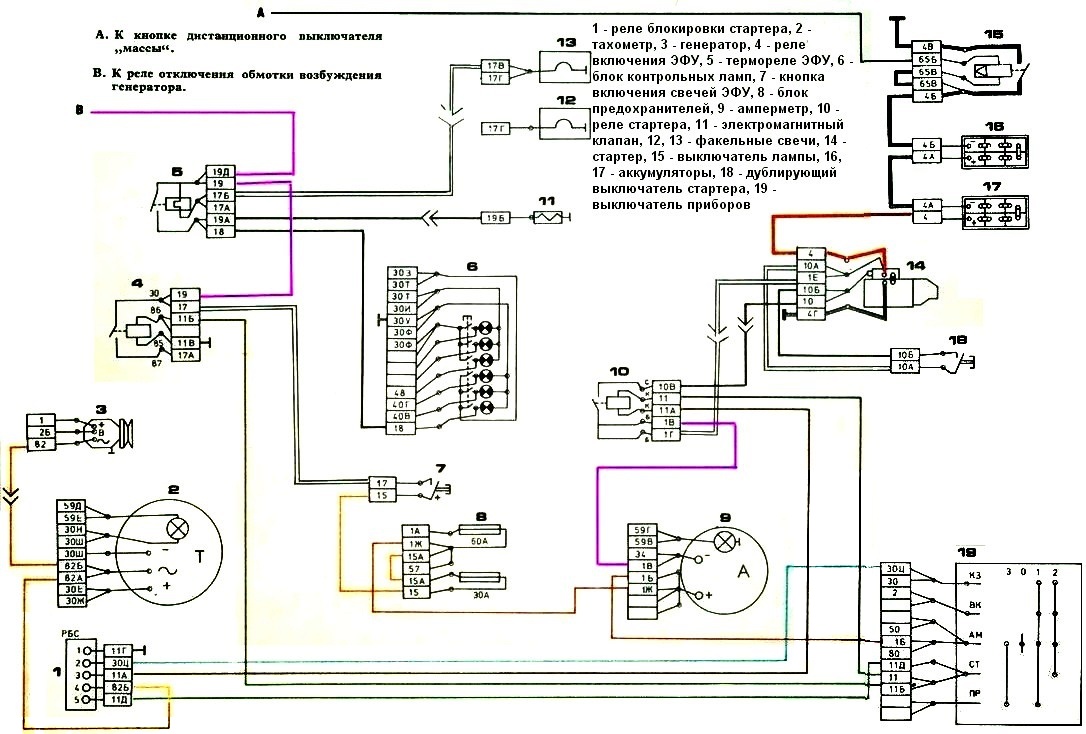 Determine the performance of relay 4 for turning on the EFU in the following order:

Define the operation of the OVG shutdown relay as follows:

Note. When preparing the car for the first winter operation, additionally check the fuel supply to the EFU candles and the throughput of the candles.

The products of the electric torch device are not subject to repair; if a product failure is found, replace it.

To check the fuel supply to the spark plugs, disconnect the fuel line from the spark plug and bleed the engine supply system with fuel with a manual fuel priming pump.

Then open the electric valve by applying voltage to the valve plug from the plug of the engine compartment lamp wire.

Fuel should emerge from the disconnected fuel line.

Determine the throughput of the candle on domestic stands SDTA-3 (KI-22201) or NC-108-1318 of the company "Mogra1" Czechoslovakia and others, which allow you to smoothly adjust the fuel pressure.

Measurement should be done after pre-filling the spark plug with fuel for 20-30 seconds. 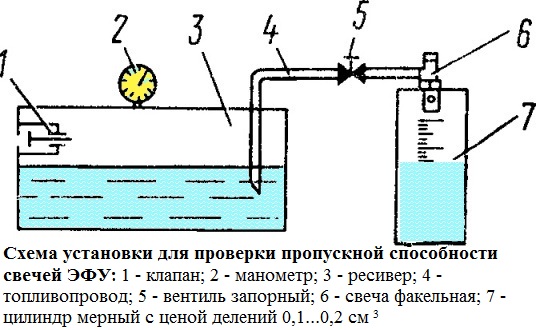 In the absence of the indicated stands, assemble the installation according to the diagram in fig. 5.

To determine the amount of current consumed by a candle assemble a circuit (Fig. 6) that allows you to have a DC output voltage of 19 V. 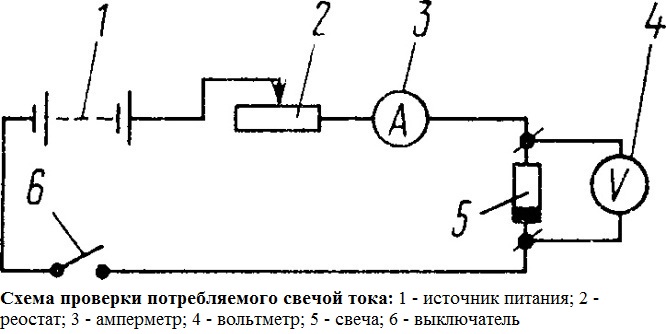 Maintain the voltage with a rheostat 2. At this voltage, the current consumed in a minute after turning on the candle should be 11-11.8 A. 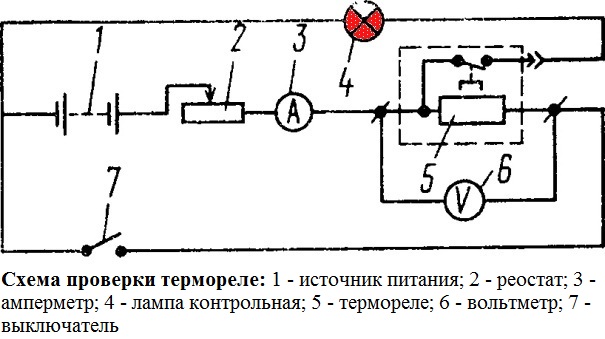 To check the thermal relay parameters assemble the circuit shown in fig. 7.

Install the thermal relay on a horizontal surface with the protective screen up.

Set and maintain the rated current of 22.8 A through the relay with rheostat 2.

Check the tightness of the solenoid valve by supplying compressed air at a pressure of 147 kPa (1.5 kgf/cm2) to the valve inlet.

When the valve is immersed in water, no air bubbles should be released

When washing the EFU candles, clean the protective sleeve 1 (Fig. 10) and grid 2 from deposits, then rinse them with gasoline.

To release the EFU fuel lines from summer fuel after replacing it with winter fuel in the electric motor power system: