It also limits the gas supply when the crankshaft reaches the maximum speed and protects the engine from simultaneously turning on the gas supply and the full (non-ignition) dose of diesel fuel. 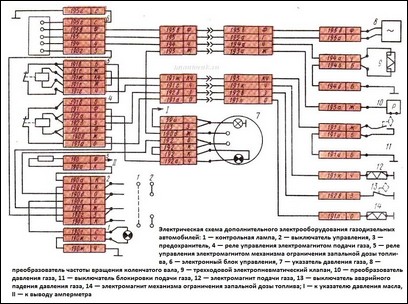 The engine is switched from diesel fuel to gas by turning on the key switch 2 (the key is recessed down), while the control lamp / on the instrument panel above the gas pressure indicator 7 lights up and current is supplied to the electromagnet 14, which prevents further movement of the rail control lever high pressure fuel pump, thereby limiting the supply of diesel fuel to the level of the ignition dose.

At the same time, the contacts of the switch 11 of blocking the gas supply, fixed on the same bracket as the electromagnet 14, are opened, and the solenoid valve-gas filter is switched on through the opening contacts of the relay 4, after which the gas enters the low pressure reducer.

At the same time, pointer 7 shows the gas pressure in the first stage of the low pressure reducer.

Later, after passing through the dispenser and mixer, the gas enters the cylinders and the engine starts to operate in gas-diesel mode.

The system for limiting the gas supply when the crankshaft reaches the maximum speed, when the mechanical regulator of the high-pressure fuel pump turns off the supply of the ignition dose of diesel fuel, consists of a gear signaling disk, an induction converter, an electronic control unit, an electro-pneumatic valve connected to the mixer diffuser and a vacuum gas limiter and a gas blocking switch.

When the maximum allowable speed (2550 rpm) is reached, the converter 8 sends a signal to the electronic control unit 6, which turns on the electro-pneumatic valve 9.

At the same time, the valve connects the cavity of maximum vacuum in the diffuser of the gas mixer with the vacuum restrictor of the dispenser, which, under the action of vacuum, closes the gas dispenser damper synchronously with the diesel fuel being turned off.

When the speed decreases, the electro-pneumatic valve closes and the throttle valve of the gas dispenser opens slightly again due to the force of the spring of the vacuum limiter, freeing the gas passage.

In this case, gas explosions in the muffler of the exhaust system are prevented.

To prevent the simultaneous supply of gas and a full dose of diesel fuel, for example, in the event of a sudden failure of the electromagnet for controlling the movable stop of the injection pump regulator lever, an electric lock is provided that turns off the gas supply; causing the engine to run in diesel mode.

A similar blocking is provided for automatically switching the engine to diesel mode in the event of a drop in gas pressure in the line (pipeline breakage, etc.).