Assembling the engine of the car GAZ-66, GAZ-53

To assemble the engine, as well as to disassemble it, the engine block assembly with the clutch housing is fixed on the stand (see Fig. 1)

All engine parts are sized before assembly, thoroughly washed, blown with compressed air and wiped with clean napkins

All threaded connections (studs, plugs, fittings, etc.), if they were unscrewed during disassembly or were replaced, must be placed on red lead or white lead diluted with natural drying oil.

Permanent connections (plugs of the block and cylinder heads) are placed on nitrolac.

The following is not allowed to be installed on a repaired engine:

Assemble the engine in the reverse order of disassembly. 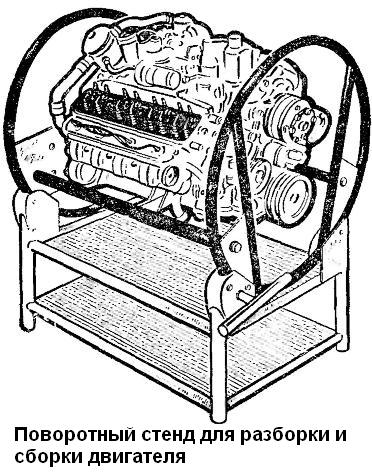 Some recommendations and additional requirements for engine assembly are given below.

When replacing cylinder liners before installation, the liner is selected according to the socket in the cylinder block.

The sleeves are selected using an accurate metal ruler and a set of feelers as follows: 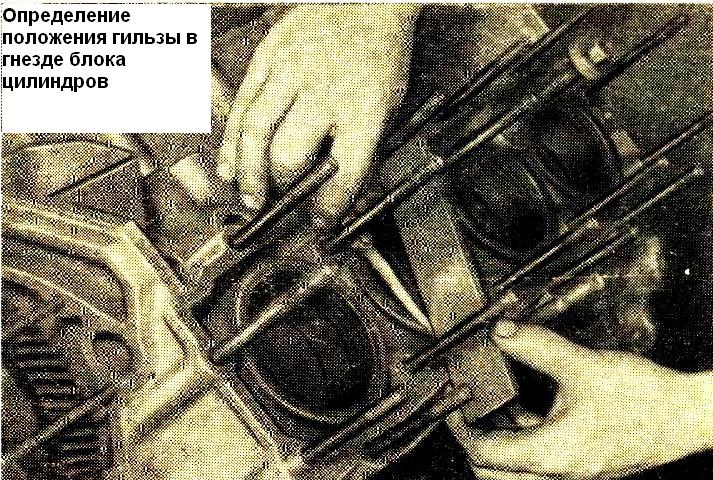 The ruler is installed on the mating surface, and the probe is inserted into the gap between the ruler and the end of the sleeve (Fig. 2).

The thickness of the gasket is chosen in such a way that after installing the sleeve with the gasket, its elevation above the surface of the cylinder block is within 0.02-0.09 mm. 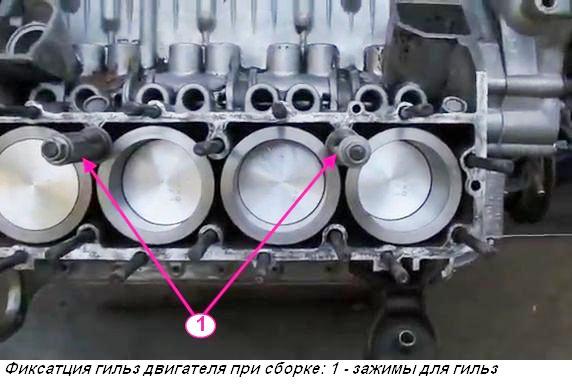 After installation in the cylinder block, the liners are fixed with clamp sleeves (see Fig. 3).

An asbestos cord impregnated with an oil-graphite mixture is used as a rear oil seal on engines.

A cord 140 mm long is placed in the sockets of the cylinder block and stuffing box.

Using the device, the cord is pressed in its sockets with light blows of a hammer, as indicated in fig. 4.

Without removing the fixture, cut the ends of the cord flush with the plane of the gland holder connector.

The cut must be even, fraying of the ends and uneven cut are not allowed. 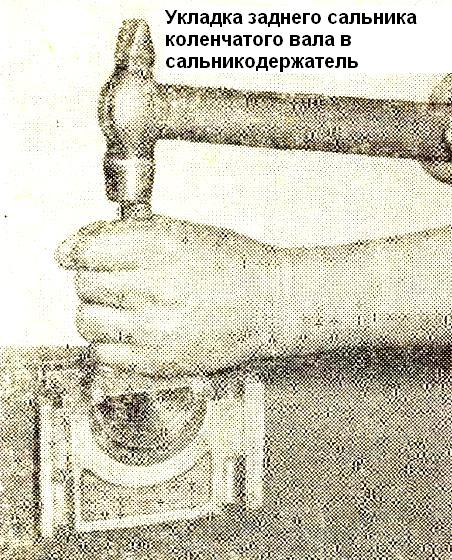 When assembling the crankshaft with the flywheel and clutch, the following requirements must be observed.

The flywheel nuts are tightened, providing a torque of 7.6-8.3 kgm.

When assembling the clutch, the driven disk is installed with a damper to the pressure disk and centered on the crankshaft bearing (the drive shaft of the gearbox can be used as a mandrel).

The "O" marks embossed on the casing of the pressure plate and the flywheel near one of the holes for the casing mounting bolts must be aligned.

The crankshaft complete with flywheel and clutch must be dynamically balanced. Permissible imbalance 70 Gcm.

When balancing, remove excess mass from the heavy side by drilling the flywheel metal at a distance of 6 mm from the ring gear with a drill with a diameter of 8 mm to a depth of no more than 10 mm.

If the imbalance of the assembled shaft exceeds 180 Gcm, the shaft is disassembled and each part is balanced separately.

The flywheel imbalance must not exceed 35 Gcm;

imbalance of the pressure plate assembly with the casing - 36 Gcm;

Imbalance of the driven disk - 18 Gcm.

On the assembly of the crankshaft, we look at the article - Collection crankshaft with flywheel and clutch and its installation in the cylinder block

Main bearing caps are installed so that the locking tabs of the liners are on one side, and the numbers or marks stamped on the caps correspond to the bed numbers.

After tightening and cottering the nuts of the main bearing caps, the crankshaft should rotate easily with little effort. 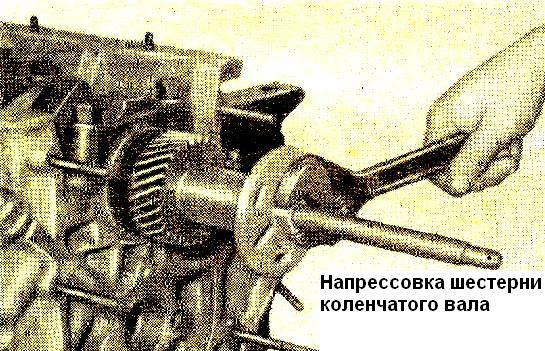 When assembling parts of the connecting rod and piston group, the following requirements must be observed. 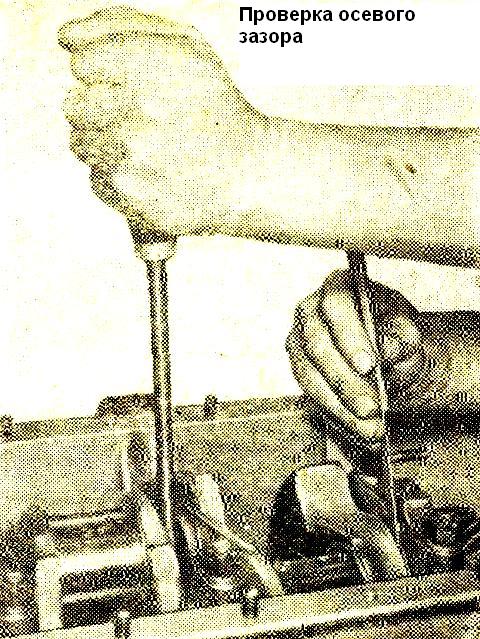 Before assembly, the pistons are heated in hot water to +70° С.

Pressing a finger into a cold piston is not allowed, as this can lead to damage to the surfaces of the holes of the piston bosses, as well as to deformation of the piston itself. 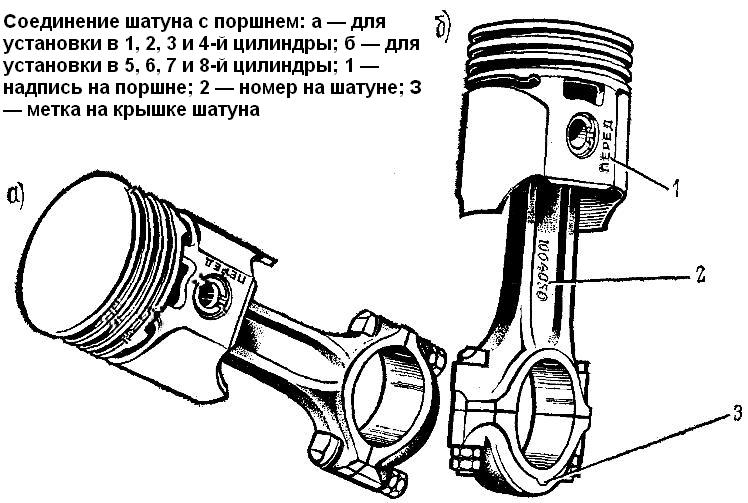 Piston rings are selected according to the liners in which they will work.

The gap measured at the junction of the ring placed in the sleeve should be within 0.3-0.5 mm for compression and oil scraper rings.

When installing the pistons in the cylinder liners, make sure that the inscription on the piston "forward" is directed towards the front end of the cylinder block. Tighten the nuts of the connecting rod bolts (torque 6.8 - 7.5 kgm) and lock. 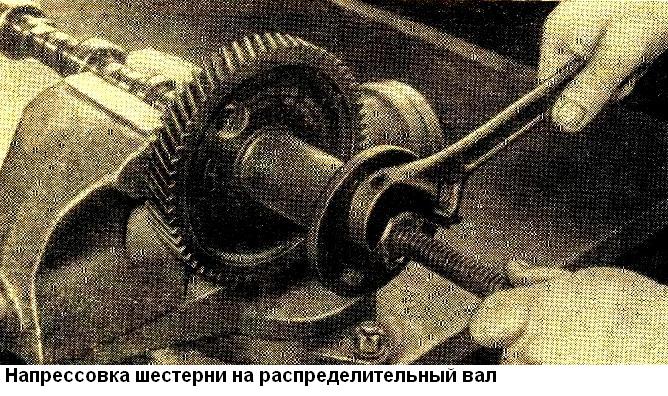 After pressing the gear onto the camshaft (Fig. 8), check with a feeler gauge the axial clearance between the thrust flange and the end face of the camshaft gear. The gap should be within 0.08 - 0.2 mm. 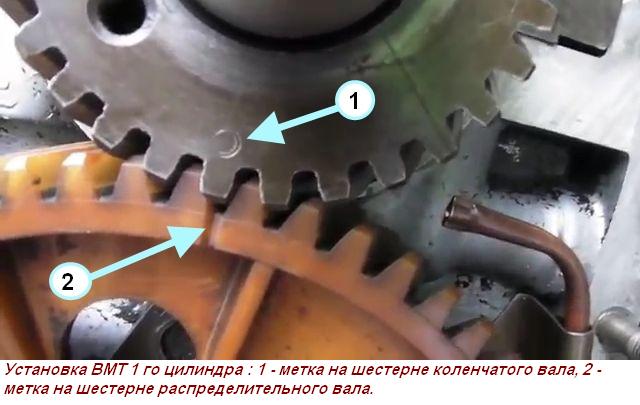 When the timing gears are engaged, the tooth of the crankshaft gear with the “O” mark must enter the cavity of the teeth of the camshaft gear, marked with a risk.

Gears must be replaced as a set, as they are selected at the factory according to the side clearance and noise during operation.

In order not to make a mistake when assembling and installing gears, it must be taken into account that the mark on the crankshaft gear is on the 12th tooth, counting from the tooth opposite the slot under the key counterclockwise (Figure 11). 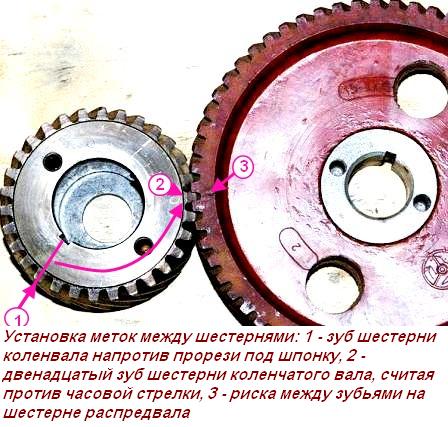 When installing on the cylinder block, center the timing gear cover on the front end of the crankshaft using a conical mandrel to prevent the front crankshaft oil seal from working on one side.

Put on the front end of the crankshaft is a conical reference and press the timing gear cover to the cylinder block with it using a ratchet, then tighten the cover fastening nuts.

The sealing gasket of the oil receiver tube should be placed in the seat in the cylinder block, and not put on the tube.

Before installing on the engine, the oil pump is filled with oil.

When assembling the cylinder head, the stems of new valves are coated with a mixture consisting of seven parts of a colloidal graphite preparation and three parts of aviation oil. 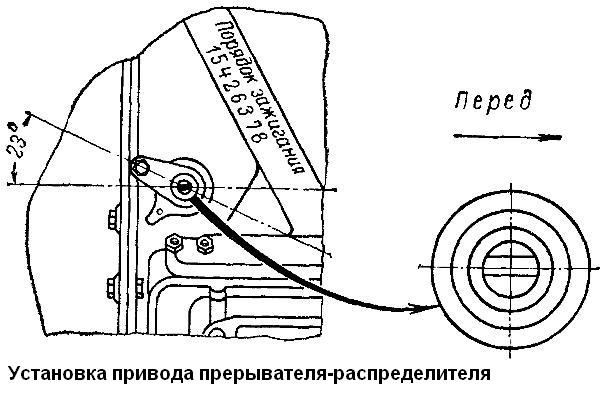 Distributor breaker drive must be installed in this order.

Set the piston of the 1st cylinder to top dead center (TDC) on the compression stroke.

Insert the breaker-distributor drive into the hole in the cylinder block so that the slot in the drive shaft is directed along the engine axis and shifted to the left, counting along the vehicle.

Fix the drive housing with a holder and a nut so that the bracket with a threaded hole for mounting the breaker-distributor is directed to the rear and rotated 23˚ to the left of the longitudinal axis of the motor, as shown in fig. 10.

Using the nuts of the octane corrector, turn the body of the breaker-distributor so that the arrow is set to zero division of the scale.

Put on the distributor cap with wires and connect the latter to the spark plugs in the order of the engine cylinders (1-5-4-2-6-3-7-8). The ignition order is molded on the engine intake pipe.