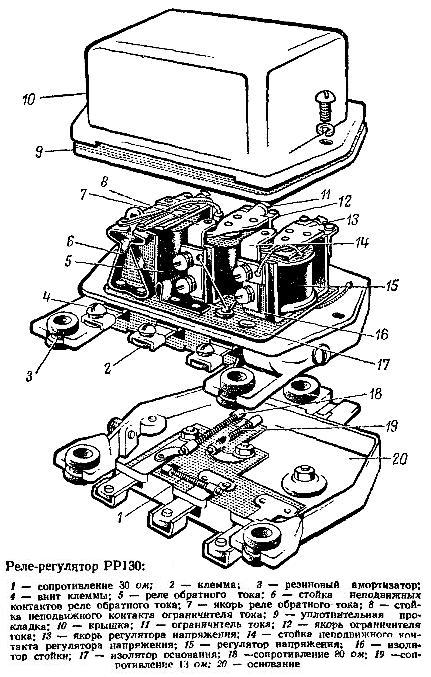 Relay-regulator RR 111 has an additional terminal "K" for connecting a discharge control lamp.

Inside the relay-regulator, the “K” terminal is connected to the yoke of the reverse current relay. 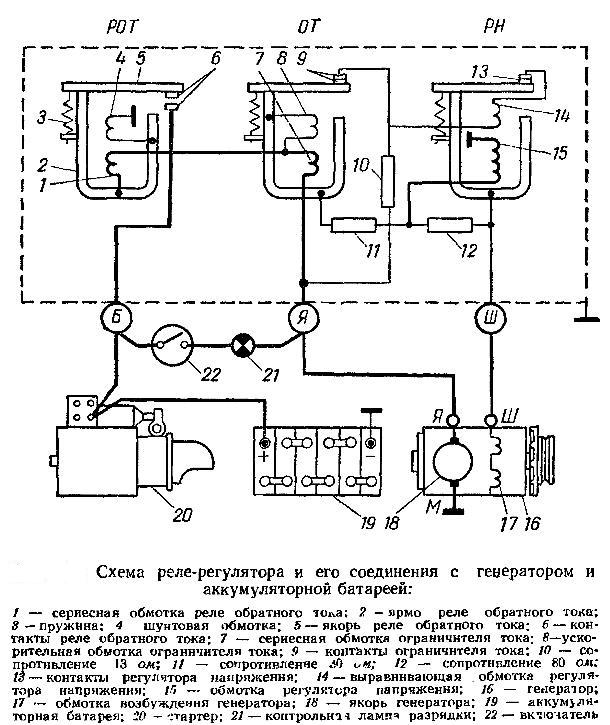 The electrical circuit of the relay-regulator PP 130 in connection with the generator and the battery is shown in fig. 2.

Checking the adjustment of the relay-regulator on the car

Include a voltmeter Z between the terminal "I" of the relay-regulator and ground. 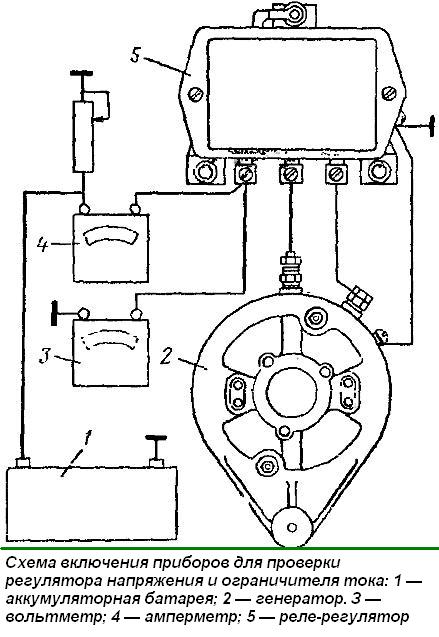 Start the engine and, slowly increasing the speed, determine the voltage at which the relay contacts close by the deviation of the ammeter needle.

Reducing the number of revolutions of the engine crankshaft, determine the reverse current strength by the ammeter at the moment the relay contacts open.

The strength of the reverse current should be within 0.5-6 amperes. 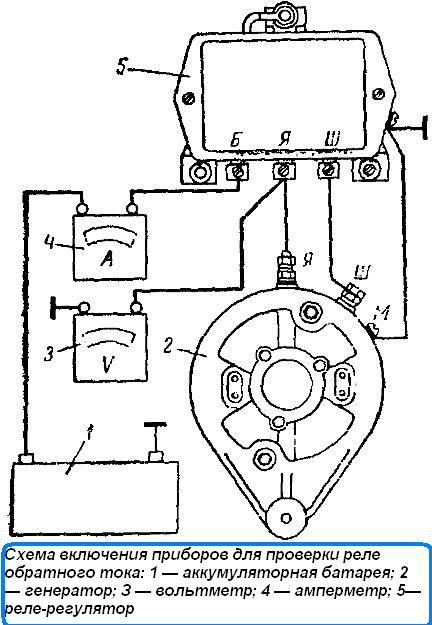 Checking the current limiter. Turn on measuring instruments as shown in fig. 4.

Start the engine and bring the crankshaft speed up to 1600-2000 rpm, which corresponds to driving the car in direct gear at a speed of 40-50 km/h.

Turn on all current consumers and increase the load on the generator with a rheostat, watching the ammeter needle.

The maximum reading of the ammeter will correspond to the adjustment of the current limiter. The strength of the limited current should be in the range of 26.5-29.5 amperes.

When checking the current limiter, read the ammeter readings quickly. Otherwise, 1-2 minutes after starting the engine, the charging current will be less than the value indicated above.

In order to be able to use the speedometer when checking the current limiter, jack up the rear axle and place it on stands, and place stops under the front wheels.

Disconnect the battery while the engine is running. Connect the voltmeter 3 to terminal "B" of the relay-regulator according to fig. 4.

If the voltage is above 15.5 volts, then adjust the regulator.

If the voltage does not exceed the specified value, turn on such a number of consumers that the generator load corresponds to 14 amperes.

Faults in the relay-regulator and how to fix them

- burning of the contacts of the voltage regulator or current limiter.

Clean the contacts and check the adjustment of the relay-regulator

- Breakage of the shunt winding of the reverse current relay

- Installing a generator with a different polarity

Repair and adjustment of the relay-regulator

In addition to the devices that are used to test the relay-regulator on a car, the workshop must have a test stand equipped with an electric motor that allows you to smoothly change the speed of the generator armature to at least 3000 rpm, a battery, a rheostat (tube or wire ), allowing you to create a load of up to 30 amperes in the generator circuit. 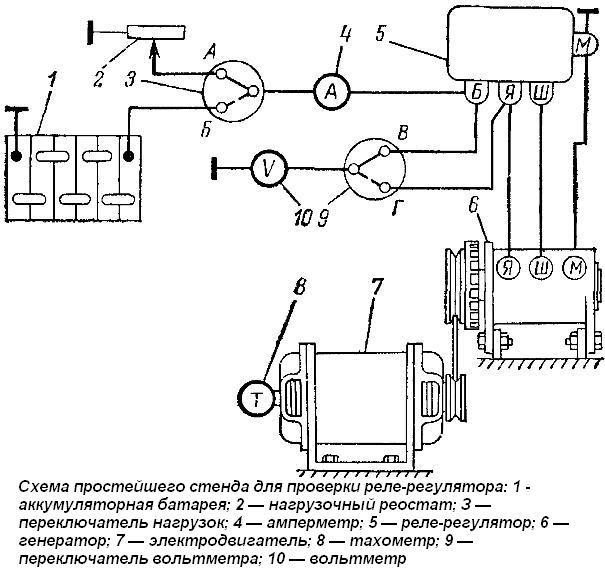 Scheme of the simplest stand for testing the relay-regulator is shown in fig. 5.

If the relay-regulator is faulty, then remove the cover and carefully inspect it.

In this case, you need to check:

- whether the relay-regulator is dirty as a result of damage to the sealing gasket and whether water penetrates under the cover.

If necessary, clean the parts from corrosion and dirt and change the gasket;

- are there any unreliable electrical connections, mechanical damage to parts or damage to the insulation of the coils due to their overheating.

Repair the noticed malfunctions, and replace the damaged parts;

- are there any signs of burning and contamination of the contacts.

The high contact resistance of the contacts resulting from their burning or contamination, as well as the weakening of the spring tension, are most often the causes of a violation of the normal adjustment of the relay-regulator.

In these cases, to restore the normal operation of the relay-regulator, it is enough to strip the contacts and adjust each of the devices.

The contacts should be cleaned with a file or glass sandpaper with a grit of 170.

After stripping, remove dust and small particles of soot by stretching a piece of clean, dry suede or a lint-free cloth soaked in alcohol between the contacts.

It is forbidden to use emery cloth to clean contacts;

The gap between the armature and the diamagnetic washer is changed by bending the limiter 5 of the armature stroke.

The gap between the contacts is changed by bending the rack of the lower contacts.

For a voltage regulator (RN) and a current limiter (OT), the gaps "B" and "D" between the armature and the core with closed contacts should be within 1.35-1.55 mm.

To adjust the indicated gaps, loosen the screws securing the top contact post and move it to set the desired gap.

The gap "G" at the voltage regulator between the earring and the armature should be 0.2-0.35 mm.

After assembling and adjusting the gaps, check the relay-regulator and adjust if necessary.

Reverse current relay adjustment. Install the relay-regulator on the stand and connect it according to the diagram shown in fig. 5.

Turn on the electric motor and, slowly increasing the speed of the generator armature, notice at what voltage the reverse current relay turns on.

The moment of switching on is determined by the deviation of the ammeter needle.

If the switching voltage of the reverse current relay does not correspond to the required value, then adjust it by tensioning the spring and bending the spring stand.

After adjusting the relay o check the brother current several times, for which, reducing the speed of the generator armature, use the ammeter to notice the current strength at which the relay contacts open.

Rheostat 2 to create a load of 14 amperes.

If the regulated voltage does not correspond to the required values, then it must be adjusted by the tension of the spring.

Turning on the instruments and turning the generator armature remain the same as when checking the voltage regulator.

The rheostat creates a load of 28 amperes, observing on the ammeter, after which value the current ceases to increase with a further decrease in the resistance of the rheostat.

The value of the limited current is regulated by the tension of the spring in the same way as a voltage regulator.

After adjusting the relay-regulator, put on the cover and re-check all devices.