The transmission is used to transmit the engine torque to the drive wheels and allows you to change the magnitude and direction of this torque in accordance with the driving conditions of the car.

The mechanical transmission of vehicles with a 6X4 wheel arrangement consists of a clutch, a gearbox, a cardan drive, main gears with semi-axes of the intermediate and rear drive axles, and a center differential. 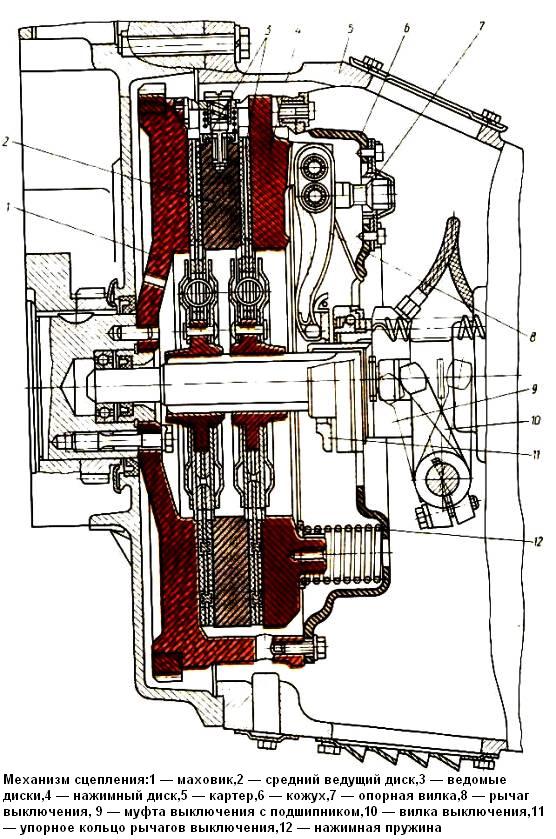 Off-road vehicles ZMAZ-4310 and KamAZ-43105 with a 6X6 wheel arrangement have three drive axles, so in addition to the above units, their transmission includes a transfer case, a driveline to the front drive axle and the front drive axle itself, consisting of the same mechanisms, as the rear ones, and additionally including cardan joints of the front wheel drive.

The clutch allows you to disconnect the engine from the gearbox, and then reconnect, ensuring gear changes with minimal impact between the teeth of the connected gears or clutches, as well as smooth starting and acceleration of the car.

In addition, the clutch protects the transmission from being overloaded by the inertial moment (when shifting gears quickly, changing the speed of the car or braking sharply without disengaging the clutch) due to slipping.

The clutch includes a mechanism and a drive. 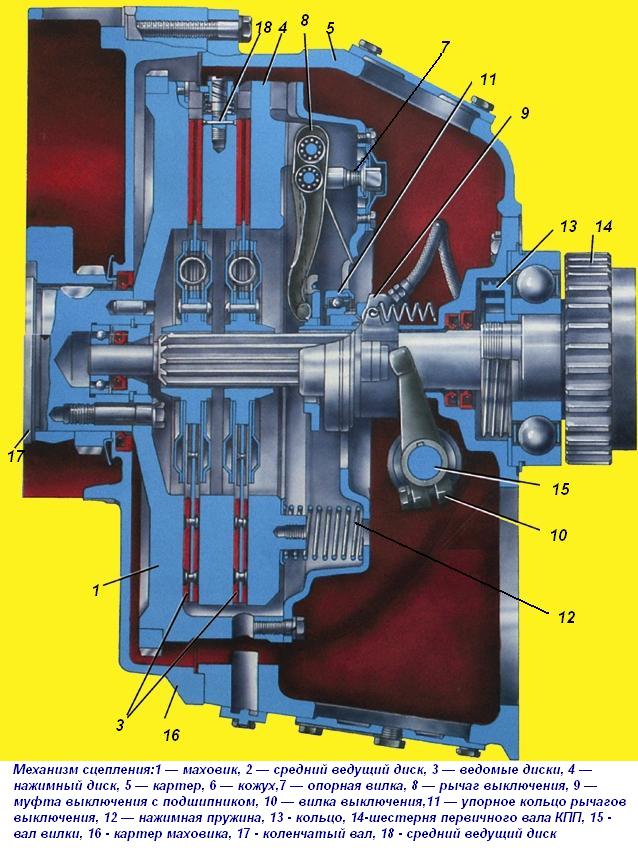 The clutch mechanism (Fig. 1) is mounted on the flywheel in the crankcase 5. The crankcase 5 is bolted to the engine flywheel housing by the front mating plane.

The clutch is friction, dry, double-disc with a peripheral arrangement of pressure springs and has a device for automatically setting the middle drive disc to the middle position.

The leading parts of the clutch include flywheel 1, middle drive plate 2, pressure plate 4

The middle driving and pressure plates have four spikes on the outer surface, which enter the grooves on the cylindrical surface of the flywheel and perceive the torque from the engine.

The driven parts of the clutch include two driven discs 3.

The driven disks are steel, equipped with friction linings made of an asbestos composition, each connected to their hubs through a torsional vibration damper of a spring-friction type (damper), which increases the smoothness of the clutch engagement and increases the durability of the transmission parts.

The hubs of the driven discs are mounted on the splines of the input shaft of the gear divider or gearbox (on vehicles without a divider).

The switching device of the clutch consists of the release levers 8, connected by their outer ends to the pressure disk 4, and in the middle part - with the support forks 7, which are installed in the casing 6, the thrust ring 11 of the release levers, the release clutch 9 with a bearing stopped at the bearing cover of the input shaft of the divider or gearbox, and the fork 10 of the shutdown, mounted on the shaft.

When the clutch is engaged, the torque is transmitted from the flywheel through the spike connection to the middle drive and pressure plates, then to the friction linings of the driven discs and through the damper springs to their hubs and then to the input shaft of the divider or gearbox.

When the clutch is engaged, the thrust ring 11 moves away from the clutch bearing 9 by the value A = 3.2 ... 4.0 mm, ensuring complete engagement of the clutch.

When the clutch is disengaged, the clutch 9 acts through the thrust ring 11 on the inner ends of the release levers 8, which rotate on the needle bearings of the support forks 7.

The outer ends of the release levers move the pressure plate 4 away from the rear driven plate 3.

The middle drive disc 2, with the help of an automatic lever mechanism mounted on the disc, also moves and self-adjusts to the middle position between the ends of the pressure disc 4 and flywheel 1, releasing the front driven disc 3.

Turbo engines are equipped with a model 142 clutch capable of transmitting torque up to 800 Nm versus 650 Nm on other models.

A distinctive feature of the clutch mechanism of this model is the presence of up to additional internal springs in the driven disc damper and additional compression springs.

In order to replace the clutch discs the gearbox must be removed.

Before removing the basket, mark the mutual position of the flywheel and the basket with a core.

We put the first driven disk with the long end of the hub towards the engine. 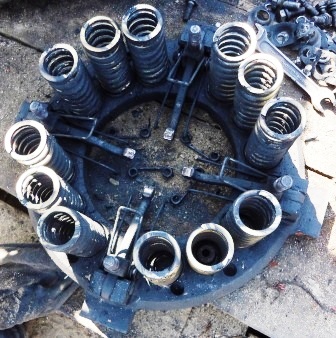 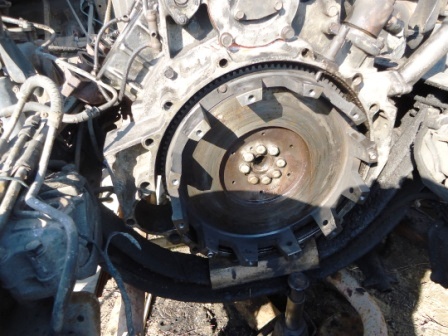 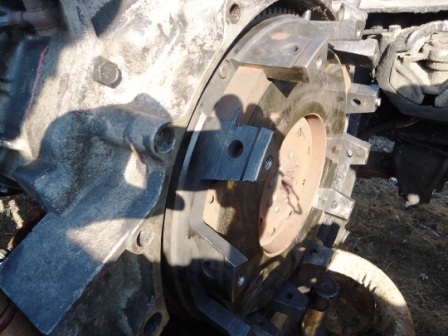 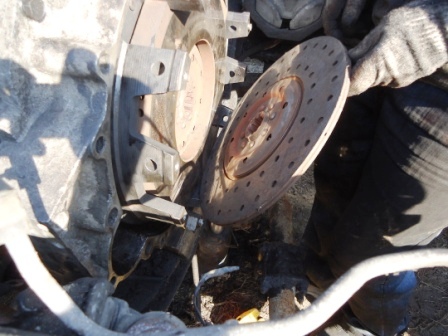 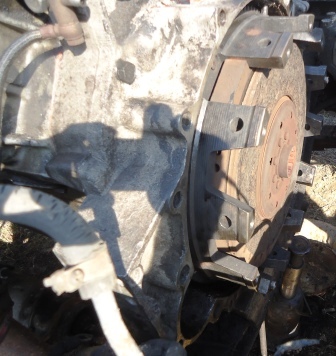 We put the first driven disk with the long end of the hub towards the engine. 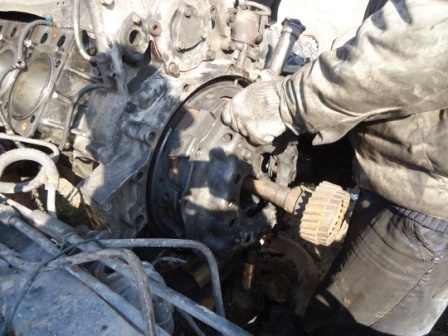 Before tightening the basket, we center the driven disks using a mandrel or the input shaft of the gearbox