The automatic brake force regulator is designed to automatically control the braking forces on the wheels of the rear bogie, depending on the change in the axial load on them and the acceleration of the release of the wheels of this bogie

Regulation of the braking forces is achieved by changing the air pressure in the brake chambers of the wheels of the rear bogie, depending on the actual axle load during braking.

The regulator is mounted on the vehicle frame. Its lever 3 is connected by a rod 4 through an elastic element 5 and a rod 6 to the beams of the axles 8 and 9 of the rear bogie so that their distortions during braking on rough roads and twisting from the action of the braking torque do not affect the regulation of the braking forces.

The elastic element protects the adjuster from damage caused by vertical movements of the rear axles, and also absorbs shocks and reduces vibration when they exceed the allowable limits. 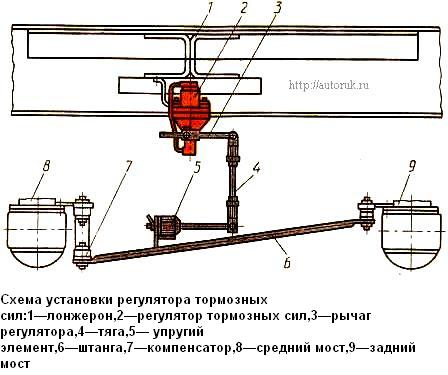 Piston ribs and inserts have an opposite slope to the piston axis.

Through the connecting tube 12, compressed air enters under the piston 8, which ensures smooth operation of the regulator at the moment the atmospheric outlet is closed by valve 1.

In the initial position (without braking, Fig. 2,b), valve 1 is pressed by its spring to the seat in piston 2. Output I is disconnected from output II and communicated atmosphere through the upper section of the brake valve, and the brake chambers of the rear wheels through the output II, hollow pusher 4 and output III are connected to the atmosphere.

When braking (Fig. 2, c), compressed air supplied from the upper section of the brake valve to the I outlet of the regulator moves piston 2 down, and piston 8 - up until it stops at the heel. In this case, valve 1 is pressed against the outlet seat of the pusher 4 and the output II is disconnected from the atmospheric output III.

Further movement of piston 2 leads to separation of valve 1 from the seat in piston 2.

Compressed air from output I enters output II and further to the brake chambers of the rear wheels, as well as through the annular gap between piston 2 and guide 9 into the cavity under the membrane 6 .Last starts ( act on piston 2 from below.

The flow of compressed air from output I to output II is stopped, i.e., the follow-up action of the regulator is carried out. The action of the piston 8 compensates for the pressure force of the valve 1 on the pusher platform 4. 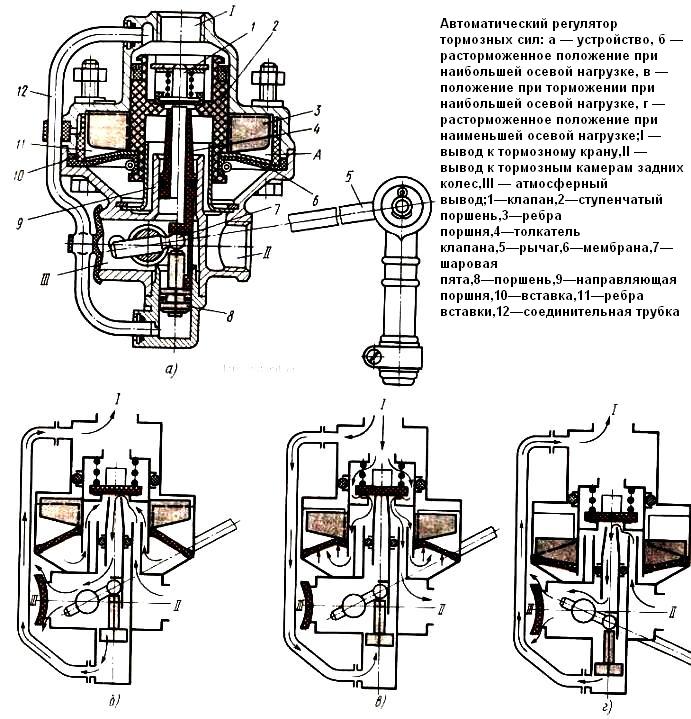 The mutual arrangement of the piston and the insert depends on the position of the lever 5 and the pusher 4 connected to it through the heel 7.

With a minimum axial load (the vehicle is unloaded, Fig. d), the distance between the axles and the regulator is the largest and the lever 5 with the pusher 4 are in the lowest position.

In order to supply compressed air to terminal II, piston 2 must move down as much as possible.

With the piston moving down, its ribs 3 fall below the ribs 11 of the insert and the diaphragm 6 overlaps with the inclined ribs of the piston.

The active area of ​​the membrane 6, acting on the piston 2 from below, isbecomes maximum. In this case, the ratio of the active areas of the upper and lower sides of the piston 2, and hence the pressure difference in the conclusions I and II become the largest.

With full axial load (fig. c), the distance between the axles and the regulator is the smallest and the lever 5 with the pusher 4 is in the upper position.

The active areas of the upper and lower sides of the piston are equal in this case; therefore, the pressure in the conclusions I and II to balance the forces acting on the piston 2 from above and below, must be equal, i.e. what pressure is at the conclusion I, the same will be in the output of II.

The intermediate position of the lever 5 is characterized by a change in the active area of ​​the membrane 6, since when the piston 2 moves down, its inclined ribs 3 protrude below the inclined ribs 11 of the insert. Moreover, the angle of inclination of the ribs is chosen so that the active area of ​​the membrane and the pressure in the brake chambers change according to a dependence close to linear at different positions of the lever.

In other words, lever 5 and piston 2 move down as the vehicle's axle load decreases. As a result, the active area of ​​the membrane 6 increases, and the pressure in the brake chambers decreases.

Thus, the brake force regulator automatically maintains compressed air pressure in the output II and the associated brake chambers, which provides a braking force proportional to the actual axial load at the moment.

When the brake is released, the pressure in the I outlet decreases.

Piston 2 moves under pressure of compressed air through membrane 6 from bottom to top, and valve 1 sits on the seat of piston 2, closing the inlet.