During the operation of the car, you need to pay attention to deviations from the norm that appear in the engine: knocks, interruptions, power loss, difficulty starting

The indicated malfunctions most often occur as a result of violation of the rules for the maintenance of power system devices and operating rules.

Work to eliminate the causes of malfunctions of the power system is reduced to checking the normal circulation of fuel all the way from the tank to the injectors, to detecting and eliminating air leaks in the system, as well as to ensuring the normal operation of the fuel equipment by adjusting or disassembling it and replacing individual faulty parts . 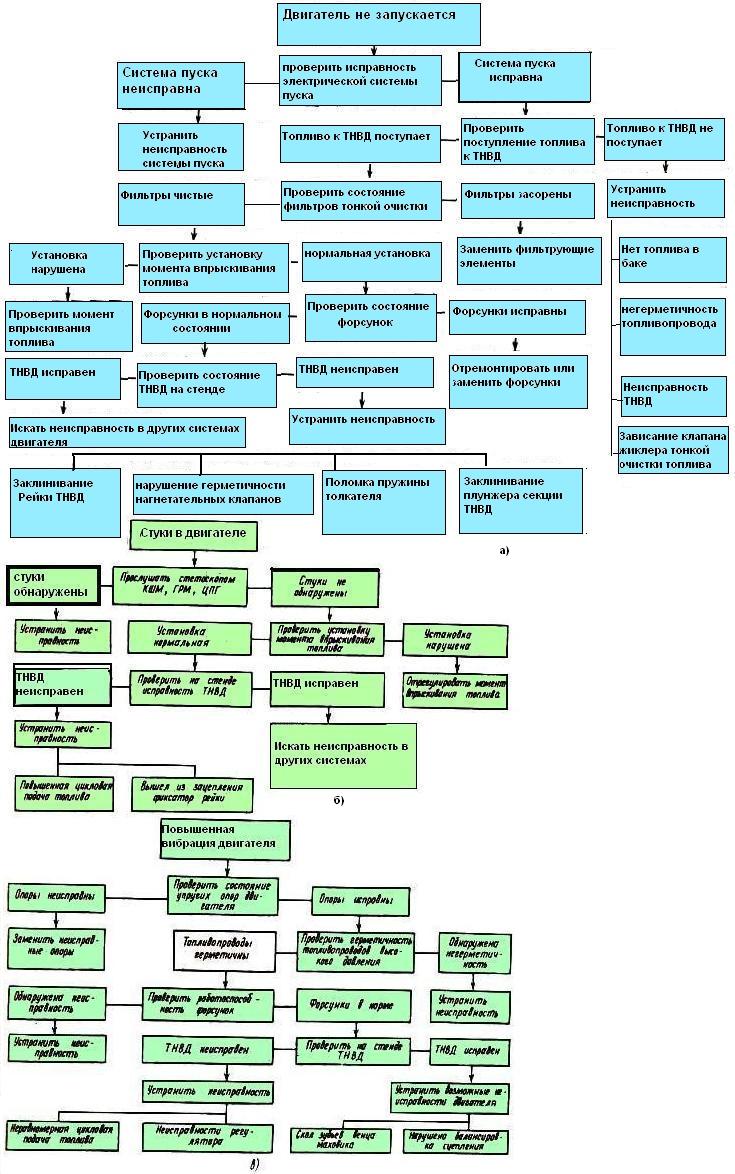 To determine the cause of the malfunction (Fig.), a sequential check of the systems and components of the engine is carried out.

The sequence of checks was established on the basis of long-term studies of the causes of engine failures and malfunctions according to the principles: “from the most probable cause to the less probable”, “from a simple check to a complex one”.

This approach provides a quick search for the cause.

So, if the engine does not start with a known good electrical starting system, you should check the fuel supply to the injection pump. This can be determined by priming the system with a manual fuel priming pump.

The cause of the malfunction may be the lack of fuel in the tank, clogging or leaks in the low pressure fuel lines.

The slightest leak in the connections in the area from the fuel tank to the fuel priming pump entails air suction, which reduces the fuel supply or eliminates it altogether.

Locations of leaks can be detected by pumping the low pressure line with a fuel transfer pump (applied to other accessories to the car) over fuel leakage.

After eliminating leaks, bleed the air from the fuel system by pumping it with a manual fuel priming pump.

To check the operation of the pump, disconnect the fuel line supplying fuel to the fine filter and turn the engine crankshaft with a starter.

If the pump is working properly, fuel will spurt out of the fuel line.

In the absence of a jet, the pump is faulty, if the fuel lines leading to the fuel tank, the coarse filter element or the fuel intake are not clogged.

In the event of the most possible malfunctions of the pump (breakage of the spring or freezing of the piston, dirt getting between the seat and the valve), it is necessary to disassemble it, eliminate the malfunction and check the operation of the pump on a special stand in the workshop before installing it on the engine.

If the fuel pump is in good condition, difficult starting of the engine can be caused by the jet valve of the fuel fine filter being stuck in the open position.

If fuel is supplied to the injection pump, but the engine does not start, then the cause of this may be clogged fine fuel filters and should be replaced.

With clean filter elements, starting the engine may be difficult due to a violation of the adjustment of the fuel injection advance angle.

If after the checks the engine still does not start, then the injectors or injection pump are most likely faulty.

In a high-pressure fuel pump, rack jamming, breakage or weakening of the bypass valve spring, dirt getting between the seat and the valve, wear or freezing of plunger pairs and delivery valves, etc., can most often occur.

These malfunctions can only be identified and eliminated in a specialized workshop using bench equipment, so the injectors and injection pump must be removed and sent to the workshop.

In winter, water may freeze in the fuel lines, filters or on the intake screen, increased oil viscosity, which makes it difficult to move the rail of the high pressure fuel pump.

In this case, you should try to carefully warm up the fuel lines, filters, fuel tank, high pressure fuel pump with a rag and hot water.

It is impossible to use an open flame for warming up.

The elimination of the causes of such malfunctions as knocking in the engine and increased vibrations of the engine, its uneven operation - loss of power, is carried out mainly by adjusting the corresponding elements of the fuel equipment or replacing faulty parts.