To increase the liter power in the KamAZ-7403.10 engine, supercharging is used, i.e. air is supplied to the cylinders using a compressor at a pressure 1.5-1.9 times higher than atmospheric

This made it possible to increase the mass of air supplied to each cylinder, and, consequently, to burn increased doses of fuel in the cylinders.

With the same engine dimensions, crankshaft speed and number of cylinders, its supercharged power increased to 191 kW (by 24%). 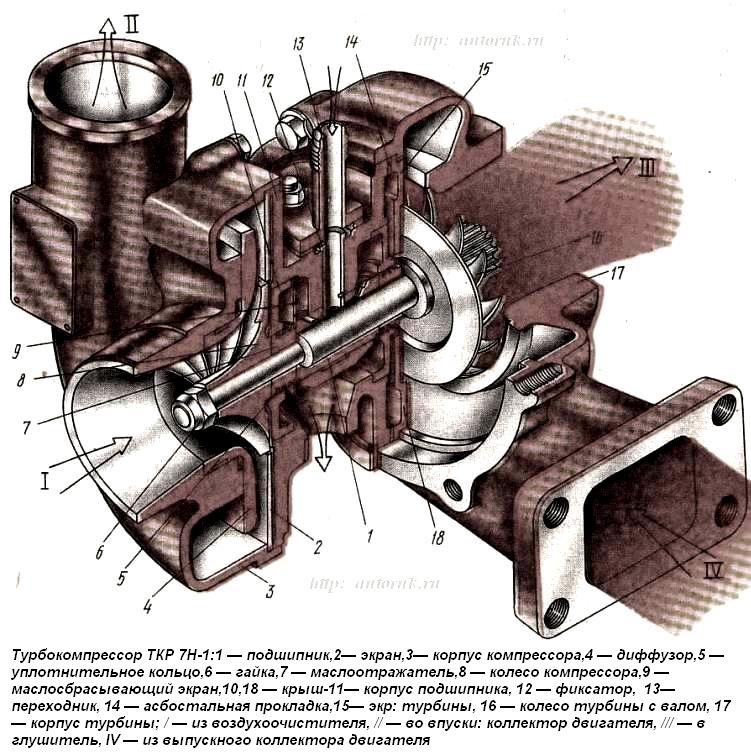 In connection with the use of turbocharging, the basic design of the KamAZ-740.10 engine has undergone minor changes.

The compression ratio has been reduced to 16 by changing the shape of the combustion chamber in the piston crown.

On pistons for a turbocharged engine, a cylindrical combustion chamber was used instead of a toroidal one, i.e. without a displacer, a larger diameter and depth.

This made it possible to increase the volume of the combustion chamber, but the pistons became non-interchangeable with those used on the base engine model.

The fuel equipment of the turbocharged engine has undergone the following changes: a model 334 injection pump has been installed, adjusted for cyclic fuel supply (96 mm3/cycle); model 271 injectors with a diameter of spray holes increased to 0.32 mm and an increased pressure for the start of fuel injection were used.

One turbocharger serves the left bank of cylinders, the other - the right one. They work due to the energy of the exhaust gases.

Normally, the energy of the exhaust gases is lost, and in the turbocharger some of it is used for work. As a result, with increasing power, the specific fuel consumption decreases.

The turbochargers are mounted on the exhaust manifold pipes so that the rotor axis is perpendicular to the crankshaft axis.

Exhaust manifolds are made of one-piece cast iron.

Special spherical washers are installed under the exhaust manifold mounting bolts, which compensate for the angular displacement of the bolts when the manifold is heated relative to the cylinder heads; from turning out, the fastening bolts are locked with folding plates.

The lubrication of the turbocharger bearings is circulating under pressure from the engine lubrication system. The oil is drained into the crankcase.

The main parts of the turbocharger are the bearing housing 11 (Fig. 1), the compressor housing 3, the turbine housing 17 and the rotor, consisting of a shaft with a turbine wheel 16 welded to it on one side and a compressor wheel 8 fixed to the shaft with a nut 6.

Hot exhaust gases leaving the cylinders enter under pressure through the manifold into housing 17 and, expanding in the interblade space, rotate the turbine wheel 16 at a very high frequency (up to 85,000 rpm); gases are released into the atmosphere through the exhaust pipe and muffler.

The rotor shaft rotates the wheel 8 of the compressor, which sucks air from the atmosphere through the air cleaner, compresses it and pumps it into the engine manifold. Under excess pressure, air enters the engine cylinders.

Since the temperature of the exhaust gases at the turbine inlet reaches 700 ° C, the turbine wheel is cast from a heat-resistant alloy, and its casing is made of cast iron.

To reduce heat transfer from the turbine housing to the bearing housing, a cast-iron screen 15 and an asbestos gasket 14 are installed between them.

At high speeds, the rolling bearings do not work reliably, therefore, for the turbocharger, a plain bearing 1 is used, made according to the “oscillating bushing” type and installed in the body bore 11 with a gap of up to 0.1 mm.

Oil is pumped into this gap, which serves as a liquid cushion that dampens vibration.

The sleeve is kept from axial displacement and rotation in the housing by latch 12, through which oil is pumped from the main engine line.

Oil, passing through the gaps along the bearing and its channels, enters drain cavity of the bearing housing and further into the engine crankcase.

Under pressure, the oil from the bearing assembly tends to flow into the flow path of the compressor, and oil leakage increases with increasing air pressure from the compressor side.

To prevent oil from entering the flow path of the compressor, a contact seal is used between the oil deflector 7 and the cover 10, which is two cast-iron piston-type sealing rings 5 ​​installed in the grooves of the oil deflector.

The seal includes an oil ejection screen 9, designed to separate the cavity of the sealing rings from the drain cavity of the bearing housing.

On the turbine side, there is a similar contact seal without an oil ejection screen, but here the sealing rings operate with gas back pressure in all diesel modes, which reduces the possibility of oil leakage.

However, these rings operate at higher temperatures, which creates the risk of coking of the grooves and loss of mobility of the rings. This is possible with a sudden stop of the engine, which was working on the load.

If, before stopping the engine, let it run for 3 ... 5 minutes at idle, then an increased temperature in the area of ​​\u200b\u200bthe sealing rings is not observed, which means that the oil does not coke in the grooves of the rotor.

The turbocharger is the lubrication point furthest from the oil pump.

This circumstance requires compliance with certain conditions for starting and warming up the engine, especially at negative ambient temperatures.

At the moment the engine is started, the oil pump supplies oil to the turbocharger bearings with a certain time delay caused by the hydrodynamic resistance of the pipelines in the oil pump suction line and the channels in the oil discharge line.

Delay in oil supply changes the hydrodynamic conditions of operation of the bearing assembly, which, if the diesel engine is not warmed up after start-up, can lead to turbocharger failure.

To avoid failure, the engine is warmed up at a crankshaft speed of less than 1500 rpm until the oil pressure in the lubrication system rises above 100 kPa (1 kgf / cm2 on the pressure gauge) .

After changing the oil in the engine crankcase and the filter elements of the full-flow filter, it is recommended to turn the crankshaft before starting the starter for 10...15 s with the fuel supply turned off.

When pressure appears in the main oil line, determined by the pressure gauge, the engine can be started.

Studies have shown that when the engine is idling, the vacuum in front of the contact seal rings behind the compressor wheel reaches its maximum value, which contributes to oil leakage into the compressor flow path and further into the engine cylinders.

Prolonged idling of the engine causes the formation of blue smoke in the exhaust, increased oil consumption, carbon formation on the flow path of the turbine.

To avoid these malfunctions, for example, when pumping air into the brake system reservoirs, it is recommended to maintain the crankshaft speed within 1200 ... 1600 rpm.