According to the method of ignition, gas-diesel can be attributed to engines with forced ignition

At the end of the compression stroke, a small (ignition) dose of diesel fuel is injected into the heated air-gas charge.

The ignition dose of fuel is fed into the cylinder in such a way that it ignites earlier than the gas and ignites the entire mass of the gas-air mixture. 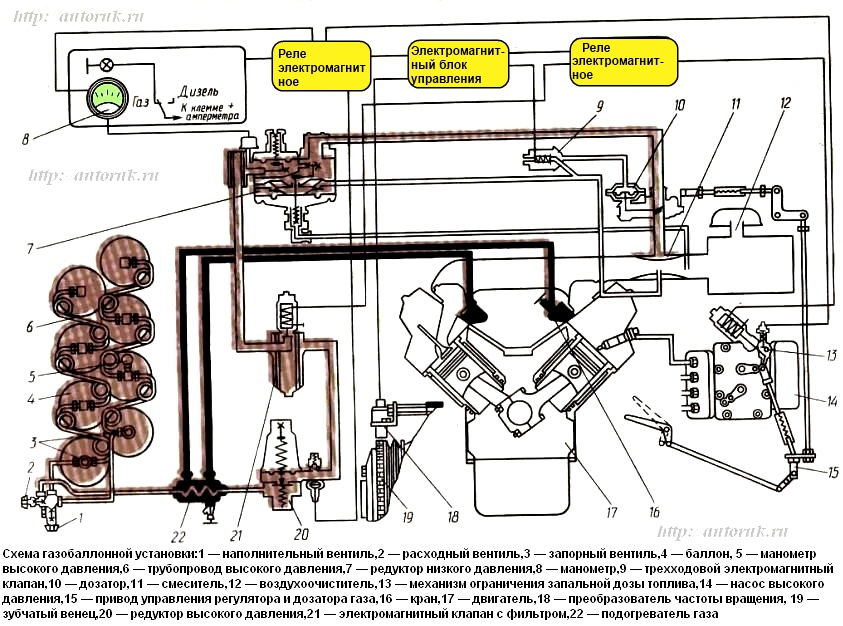 When re-equipping a diesel engine to operate in gas-diesel mode, a gas-air mixer with a gas supply control system when the load changes and an upgraded crankshaft speed controller with a fuel supply limiter when the engine is running in gas-diesel mode are added to the design of the power system.

This conversion method provides the ability to quickly switch from diesel to gas-diesel mode and vice versa.

Compressed natural gas is used as the main fuel in gas-diesel.

The characteristics of compressed natural gases used as motor fuel must comply with the requirements of TU 51-166-83, which establishes two grades of gas: A and B.

These gases at normal ambient temperature and high (up to 20 MPa) pressure retain a gaseous state.

The main component of natural gas is methane, which is a complete fuel with good anti-knock characteristics and a fairly high specific heat of combustion.

Natural gases also contain harmful impurities, the percentage of which is limited by technical conditions.

Carbon monoxide (CO) and hydrogen sulfide (H2S) have a strong toxic effect on the human body, in addition, hydrogen sulfide, when burned, forms sulfur compounds that destroy parts of the engine and gas equipment.

The presence of moisture leads to the formation of plugs in pipelines at low temperatures and gas reduction.

With sulfur compounds, moisture forms acids that cause corrosion of the walls of cylinders and pipelines.

Compressed natural gas odorization allows you to smell the presence of gas at the workplace and in the working area.

In terms of toxicological hazard, the maximum permissible concentration of gas at workplaces and in working areas should not exceed 300 mg/m3. It is determined using gas analyzers.

Due to the fact that methane is much lighter than air, ventilation exhausts and gas alarm sensors should be installed in the upper part of the maintenance and repair rooms for gas-diesel vehicles.

In addition to the listed impurities, natural gas contains other combustible gases: propane, ethane, butanes and pentanes, the percentage of which is insignificant, therefore, the properties of compressed natural gases are determined by their main component - methane (CH).

Flammability limits characterize the concentration of gases in a mixture with air at which the engine can operate.

For natural gas at a temperature of +20 ° C and normal pressure, the flammability limit is: lower - 4%, upper - 15% of the gas content in the air volume. At this concentration, the mixture of gas and air is explosive.

The compressibility factor of a gas takes into account the disproportionate change in its volume with increasing pressure.

In a gas-cylinder installation, store natural gas in a compressed state of up to 20 MPa in cylinders.

The reserve of natural gas in one cylinder at a pressure of 20 MPa is about 10 m3.

Six, eight or ten cylinders can be used to ensure a travel of 250 ... 300 km, depending on the model of the car. The figure shows a diagram of a gas-cylinder installation of a KamAZ-54118 truck tractor with eight cylinders 4.

The package of cylinders consists of two sections with four cylinders in each. This scheme allows you to ensure the operation of the engine on the gas supply of one section in case of leakage in the other.

Cylinder sections, each of which shut-off valve 3 is provided, connected to the crosspiece with filling 1 and flow 2 valves.

During engine operation in gas-diesel mode, valves 2 and 3 are open.

Compressed gas under high pressure passes through the heater 22, in which the coolant is the liquid of the engine cooling system, and enters the single-stage high-pressure gas reducer 20, where the gas pressure is reduced to 0.9 ... 1.1 MPa.

On the way to the reducer, the gas is heated to avoid ice blockages in the pipeline, which can form due to strong cooling of the gas during a sharp decrease in pressure in the reducer.

Then the gas is supplied to the filter 21 with a felt element and a solenoid valve, and from it to a two-stage gas reducer 7, where its pressure is reduced to almost atmospheric pressure.

The operation of the reducer is controlled by a vacuum transmitted to it through a tube from the diffuser of the mixer 11.

From the reducer, gas through the dispenser 10 enters the mixer, where a gas-air mixture is formed, and then, together with air, it is sucked into the engine cylinders.

The gas pressure in the cylinders, and therefore the fuel supply in them, is controlled by a high pressure gauge 5. The low pressure manometer 8 checks the operation of the first stage of the gearbox.

An electromagnetic mechanism 13 is installed on the cover of the crankshaft speed regulator, which limits the travel of the regulator control lever from the position of the minimum idle speed to the position corresponding to the supply of the ignition dose of fuel.

The engine is switched to gas-diesel mode after starting and warming up the diesel engine to a coolant temperature of at least 50 ° C by switching the key on the cab instrument panel to the "Gas" position.

The engine control system is electric. For this, additional gas-diesel electrical equipment is installed on the car.

It also includes a gas supply limitation system: when the crankshaft reaches its maximum speed, when the mechanical speed controller turns off the supply of a pilot dose of liquid fuel, and an electrical interlock that prevents the simultaneous supply of gas and full supply of liquid diesel fuel (double thrust).

Cylinders for compressed gas. Cylinders are designed for storage and transportation of gas fuel and are the most important components of the gas equipment of a car. The safety of car operation depends on their reliability and tightness.

The cylinders are designed for a working pressure of 20 MPa. They are made from seamless seamless pipes by rolling the bottoms and necks.

To increase strength and ensure shatter resistance in case of destruction, they are subjected to heat treatment, hardening and tempering.

Currently, two types of cylinders are used, made of carbon or alloy steel.

Regular carbon steel cylinder with a capacity of 50 liters. has a mass of 93 kg.

An alloy steel cylinder has the same capacity, but its weight is not more than 65 kg.

Finished cylinders are tested for strength and tightness of connections with fittings.

Suitable cylinders are painted red and the following passport data is stamped on the front bottom: manufacturers trademark, cylinder number, weight, date of manufacture and year of the next test, working pressure and test pressure, capacity, stamp of the quality control department inspector plant, manufacturer and standard number.

Lets consider an example of indicating the dates of manufacture and the next test 10-89-94 - the cylinder was manufactured and tested in October 1989, repeated hydraulic tests should be completed in 1994.

The place on the cylinder with passport data is covered with a colorless varnish and surrounded by a colorful frame.

The neck of the cylinder has a hole with a conical thread, into which an adapter for connecting tubes is screwed 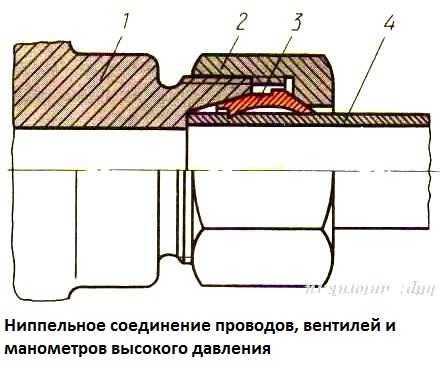 A necessary condition for the correct installation of the adapter in the cylinder is the presence of 3 ... 4 spare threads on the adapter.

The cylinders are interconnected by high-pressure gas pipelines. They are made from seamless steel tubes with an outer diameter of 10 mm and a wall thickness of 2 mm.

Gas pipelines are connected without gaskets. The tightness of the connections is achieved by cutting the nipple 3 into the tube 4 and tightly pressing the end of the tube to the attached fitting 1 using the union nut 2.

Nipple connection allows multiple disassembly. When installing a new nipple, make sure that it is at a distance of about 1.5-2 mm from the end of the tube.

When tightening the union nut 2, the nipple 3 is deformed and takes the form of an internal conical hole in the wtutsera, ensuring the tightness of the connection.

At the same time, the nipple cuts with a sharp edge into the walls of the tube, preventing it from tearing out of the connection under high pressure.

The tightening torque of the union nut during the pre-cutting of the ring should be 40-56 N.

The nipple must be firmly seated on the tube. If, after tightening the nut, the nipple does not ensure the tightness of the connection, then it should be replaced together with the gas pipeline.

Preliminary soldering of the nipple with solder and flaring of the ends of the tubes are not allowed.

If the nipple connection after tightening nut 2 does not provide complete tightness, then it should be replaced.

To do this, nipple 3 is cut off together with a piece of tube, the end of the tube is cleaned at a length of 13-15 mm from paint and anti-corrosion coating and a new nipple is installed on it.

To compensate for the twisting forces that are transmitted through the cylinders to the gas pipeline in case of possible deformations of the car frame, the high-pressure pipes are bent so that they form compensation rings.

These rings also compensate for the shortening of the tubing when changing the nipple.

Cylinders on the car are fixed with brackets and clamps.

Displacement of cylinders due to the loosening of their fastening can cause a rupture of the high pressure gas pipelines in the nipple connection.

Tube breaks, as a rule, are accompanied by serious consequences, up to a fire. Therefore, the fastening of the cylinders should completely exclude the possibility of their movement.

Special attention should be paid to strengthening the cylinders with tie-down straps. Tightening the clamps until their ends touch is not allowed. 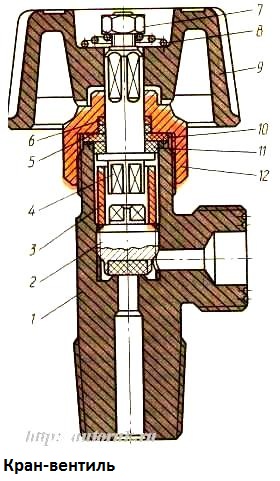 Cylinder valves are used to connect sections of cylinders to a common line.

The filling valve is designed for filling cylinders with compressed gas.

The filling valve fitting has a special left-hand thread and is closed with a plug that protects it from dirt and moisture.

On other valves, fittings with right-hand threads.

To connect gas pipelines, an adapter is installed on this fitting, sealed with a gasket. Otherwise, all valves are arranged in the same way, their design is shown in the figure.