The gear shift mechanism (Fig. a) is assembled in the upper cover 2 of the gearbox housing and consists of three gear shift rods, shift forks 3, 5, 6, a locking mechanism, three rod position locks,

Inside the cover there are lugs for the passage of rods, and in its front part there are three vertical holes for installing rod retainers and one horizontal hole for mounting the balls of the locking mechanism.

In front of the cover on the right is the breather 12 (Fig. 1 b) of the gearbox.

To prevent accidental engagement of first gear and reverse gear, an upper horizontal hole with two diameters is made in front on the right.

A fuse pusher 15 and a fuse are installed in a small diameter hole.

The large diameter hole is threaded to secure cup 13.

A spring 14 is installed in the blind hole of the glass.

Each rod is designed to engage two gears: rod 18 for fourth and fifth gears, rod 17 for second and third gears, rod 20 for first gear and reverse gear.

To fix the rods, each of them has three holes, where balls 7 enter under the action of springs (Fig. 1c).

To prevent the simultaneous engagement of two gears, a locking device is designed, consisting of a pin 11 and two pairs of balls 10, 19.

The balls are located between the rods in the bushings, the pin is in the hole in the middle rod between the balls.

The diameters of the balls and the distance between the rods are chosen so that when any rod is moved from the middle position, the balls leave the holes of the moving rod and enter the holes of the fixed rods, blocking them with the body.

Each stem has corresponding shift forks.

The forks are fixed on the stems with set screws, which are locked with a cotter wire.

The ends of the 4th and 5th shift forks end in a machined surface that has grooves.

The fork grooves include the fourth and fifth shift synchronizer carriage ring.

To move the rods and engage the required gear, the rod heads fixed with set screws are installed on the rod of the first gear and reverse gear and on the rod of the second and third gears; the shift fork of the fourth and fifth gears is made integral with the head.

In the heads of the rods and in the head of the shift fork of the fourth and fifth gears there are grooves that coincide in the neutral position and provide unhindered swing of the lever in the transverse plane relative to the axes of the rods.

In the neutral position of the gear shift lever, lever 20 (Fig. 2) is in the middle position and its tab enters the groove of the second and third gear shift rod head.

When moving the gear lever from the neutral position to the right and left, the lever 20 rotates about the axis of the rod and enters the groove of the head of the rod of the first gear and the rear input gear.

Fuse 24 enters the hole in the head and prevents it from moving in the longitudinal direction.

When you turn on the first gear or reverse gear, the lever 20, turning, acts on the fuse pusher 25, which, in turn, moves the fuse 24, compressing the spring and disengaging it from the head 23.

The lever 20 has a split head and is mounted on the stem 19 with a key and tightened with a tie bolt.

The rod 19 on the outside ends with a flange designed for connection with the flange 18 of the rod 17 of the remote drive. The rod moves into a spherical support.

On the right side of the support, a set screw 21 is screwed in, which fixes the lever 20 in the neutral position during adjustment work.

In the working position, the screw must be screwed in by 21 mm and locked with a nut 22.

The remote drive for controlling the gearshift mechanism consists of a rocker gearshift lever 4, lever support 2, front 10 and intermediate 17 rods with an adjusting flange 18. 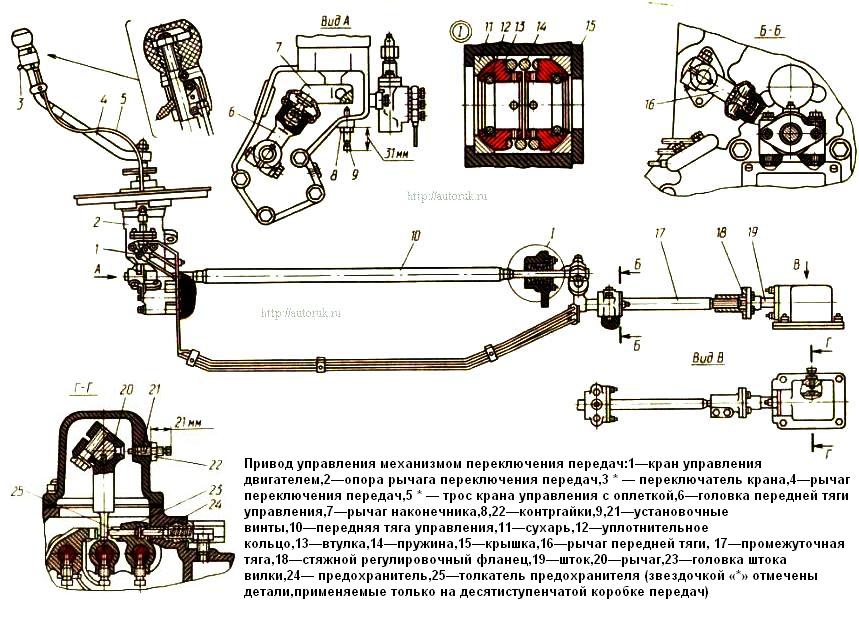 Lever support 2 is mounted on four bolts on the front end of the engine block. From below, a set screw 9 is screwed into the support body 2, locked with a lock nut 8.

Screw 9 is designed for correct installation and adjustment of the gearshift control drive. In working position, the screw must be backed out by 31 mm and locked.

The front link 10 is mounted on two spherical bearings in the engine camber along the left row of cylinders.

The front thrust bearing is located in the gear lever support, the rear one is in the flywheel housing.

The bearing cavities are filled with grease.

The front and rear supports are structurally identical and each consist of two bushings 13 with internal sealing rings 12, two crackers and a spacer spring 14.

The front and rear parts of the rod end with cylindrical necks, on which are installed on segment keys: in front - lever 7 of the tip, in the back - lever 16 with a ball head for connecting with the cylindrical hole of the intermediate rod lever.

The intermediate rod 17 is made integral with the lever, in the cylindrical bore of which the ball head of the lever 16 enters.

An adjusting flange 18 is screwed onto the threaded part of the rod, with the help of which the rod is connected to the stem flange 19 with four bolts.

The rod assembly with the rod is mounted on two spherical bearings: one thrust bearing is located on the clutch housing, the other on the gearbox.

The spherical link support is structurally identical to the front link supports, their elements are interchangeable.