In the event of a tire puncture, this system allows you to continue driving for a short time to a parking spot without changing the wheel, provided that the compressor can replace the air leak from the damaged tire.

The system is controlled from the driver's cab, the air pressure in the tires is constantly monitored by the pressure gauge located on the instrument panel and must be maintained within normal limits. 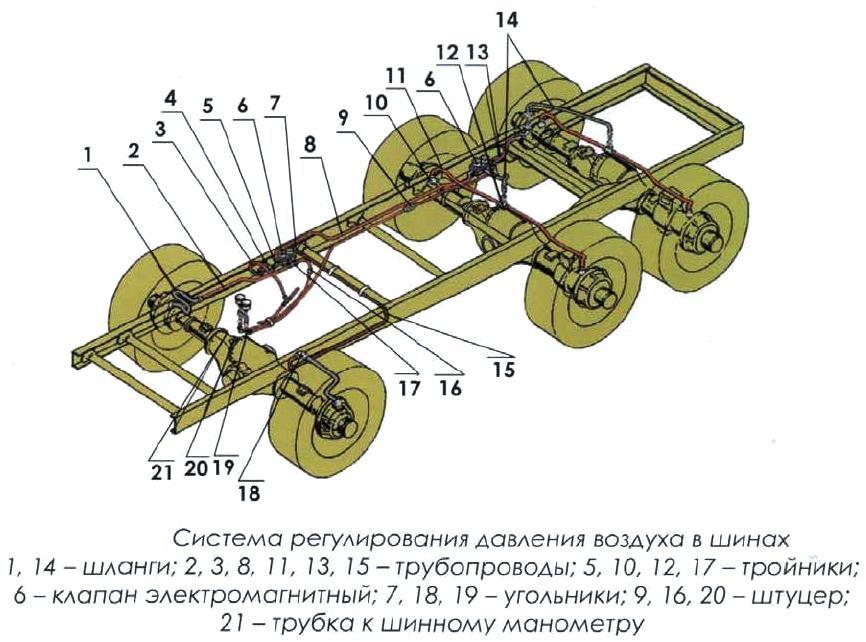 The control system includes a pressure control valve 1 with a limiter valve that protects the pressure in the pneumatic system from falling below 550 kPa, air lock valves 3, pneumatic lines, air supply heads.

Spool 12 moves in housing 6 and is sealed with stuffing box 9.

The thrust ring located on the spool limits the extreme limits of the spool travel.

The spool is connected through a pin to the rod of lever 2 of the valve, which has three positions.

The left position of the lever corresponds to tire inflation, the middle one - neutral, the right one - to release air from the tires into the atmosphere. 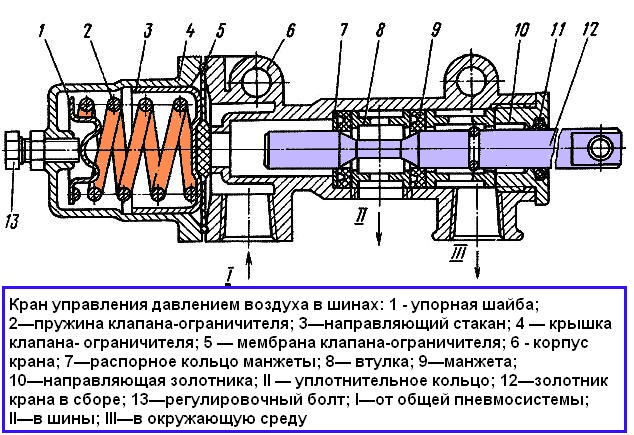 When the valve lever is moved to the left position, the spool moves to the restrictor valve, the groove on the spool is installed against the stuffing box and air enters the tires through the gap formed under the stuffing box.

When the valve lever is moved to the right position, the spool moves away from the restrictor valve, the groove on the spool is set against the other gland and the air from the tires escapes into the atmosphere.

When the valve lever is moved to the neutral position, the groove on the spool is located between the seals and prevents air from entering the tires and from the tires into the atmosphere.

The crane control handle is installed under the dashboard on the right side of the driver. 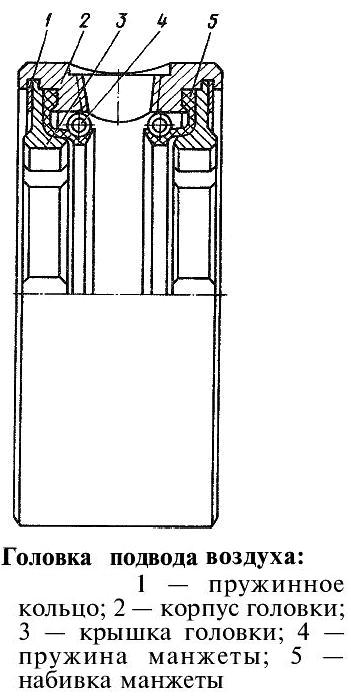 The air supply heads mounted on the axle shafts consist of a housing and two rubber cuffs with springs that ensure the tightness of the movable joint.

Air to the head enters through the fitting. From the cavity of the head, air passes through the channel in the axle shaft through the air lock valve and the connecting hose and enters the wheel tire.

Air lock valves are installed on each wheel, designed to disconnect the tires from the system when the car is parked for a long time and in case of failure of the cuffs of the air supply head.

The faucet consists of a body 7, in which the plug 1 moves along the thread, its outer end has a square turnkey head.

The plug is sealed with a rubber ring 4 with washers 3 and 5 and pressed with a nut 2. The sealing of the valve body in the half shaft seat is provided by a rubber ring 6. 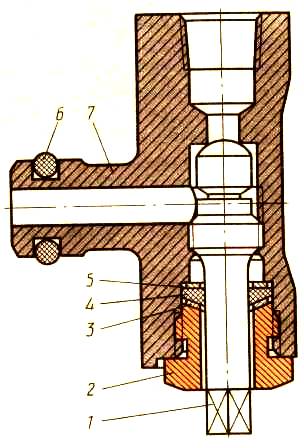 The movement of the car on paved roads and rolled dirt roads is only allowed when the air pressure in the tires is 300 ... 340 kPa, since this pressure ensures the safety of the tires.

On difficult sections of the road, a short-term decrease in air pressure in the tires is possible.

At the same time, the maximum speed of movement must comply with the standards given in the table.

Norms for choosing the maximum speed

After overcoming difficult terrain, increase the tire pressure (> 170 kPa), which allows you to move at a higher speed.

While driving, the wheel valves must be fully open, and for long stops, in order to avoid air leakage through leaky pipelines, they must be closed.

The air pressure in the tires is determined by the pressure gauge with the wheel valves open.

If a pressure drop is observed, then by closing all the taps, and then opening them one by one, it is necessary to determine which tire is leaking air.

When the air lock valves are closed, it is not allowed to move the pressure control valve handle to the position corresponding to tire inflation, in order to avoid damaging the tire pressure gauge.