It consists of a drive, a worm gear, a drum with a cable attached to it, a band brake and a cable layer. 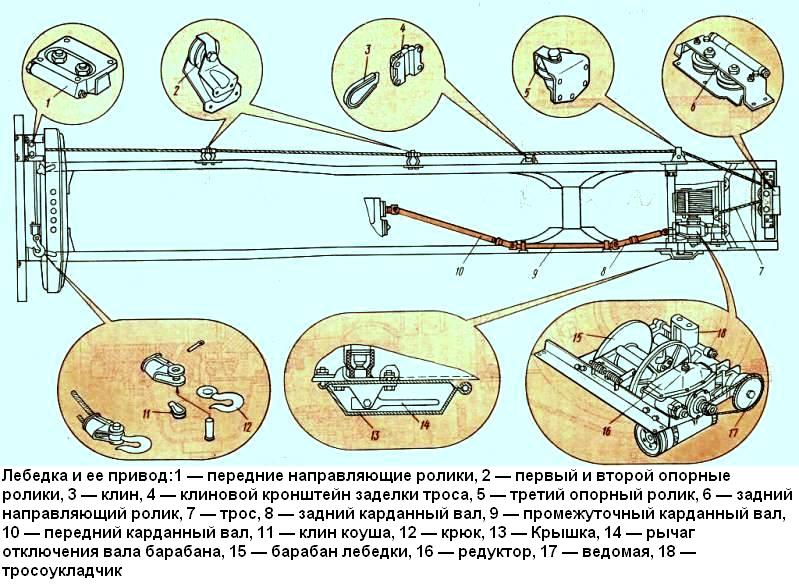 The winch is used only on KamAZ-4310 vehicles, the winch cable can be extended both forward and backward.

The working length of the cable when issuing back is 86 m,

The winch is installed at the rear of the frame on two crossbars.

The winch is driven by a single-speed power take-off mounted on the transfer case.

The output shaft of the box is mounted in the bearing cup housing on two ball bearings.

A flange with a reflector is fixed on the splines of the output shaft for connecting the cardan shaft of the winch drive.

The bearing cup is closed with a lid sealed with a gasket. To prevent oil leakage, a rubber cuff with a spring is installed in the cup lid.

The power take-off is activated by a remote-controlled membrane-type pneumatic mechanism.

The torque of the power take-off to the gearbox is transmitted by three cardan shafts 8, 9, 10 (Fig. 1).

There is a shear safety bolt on the rear driveshaft to protect parts from overload.

The front propeller shaft has a movable spline connection that compensates for mounting inaccuracies.

The intermediate cardan shaft is mounted on two supports of the same design. 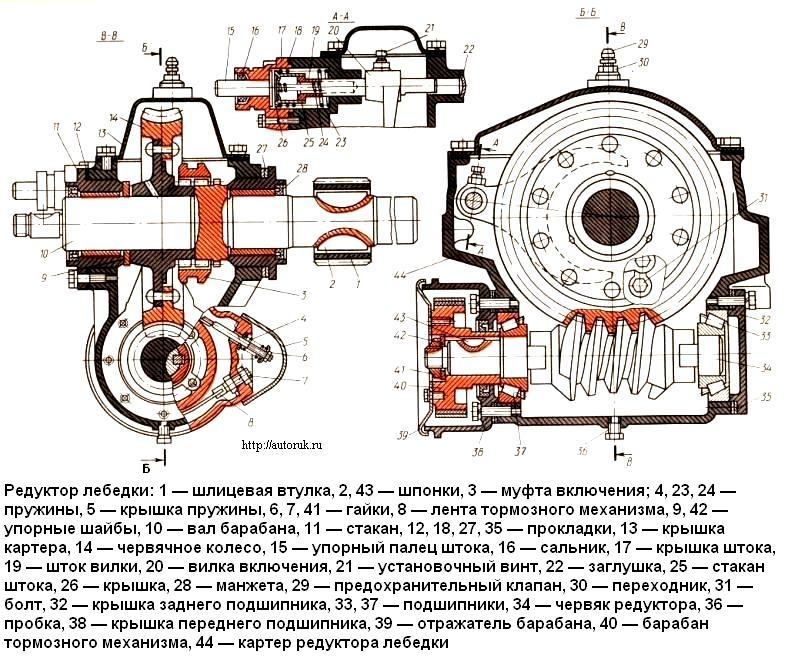 The mechanism of the winch gearbox consists of a globoidal pair: a worm 34 and a worm wheel 14 with a gear ratio of 31.

The worm wheel 14 is attached to the hub, which is connected by a movable clutch 3 to the shaft 10 of the drum. The drum is mounted on the shaft through a splined sleeve 1 on the key 2.

An automatic belt brake is installed on the gearbox worm, designed to brake the gearbox worm shaft when the clutch is disengaged, as well as when the propeller shaft yoke safety bolt is sheared in case of overloads.

Brake drum 40 is mounted on the end of the worm shaft.

The drum is braked by tape 8 of the brake mechanism with friction linings.

One end of the tape is fixed with nuts 7 in the cover 38 of the front bearing, and the other is movably fixed in the hole of the same cover through the spring 4, which tightens the tape in the direction opposite to the rotation of the worm shaft 34 when the winch cable is wound onto the drum.</p >

The belt compresses the spring under the action of friction, which leads to a weakening of the pressure of the tape on the brake drum.

During the reverse rotation of the worm shaft, under the action of the friction force, the tape self-tightens and the drum brakes due to the rigid fastening of the second end of the brake tape.

At a low speed of the worm shaft, the braking force generated by the automatic brake mechanism is insignificant and does not prevent the cable from unwinding.

If the safety bolt is sheared when the drum rotates at an increased frequency, the action of the brake mechanism becomes significant and contributes to self-braking of the worm gear.

The tension of the brake band is adjusted by tightening the spring.

The cable layer ensures a uniform tight laying of the cable on the drum.

The body 2 of the cable laying machine reciprocates along the lead screw 13, laying the cable along the drum. Pipe 15, rigidly connected to the body, and the roller are guides.

The lead screw with left and right threads is mounted on a bearing 9 in the drive housing 10 and two supports inside the pipe, it is driven by a chain drive from the drum shaft through the drive and driven sprockets 7.

The cable is fixed on the winch drum and passes between two rollers 1 mounted on axles 5.

The winch is also equipped with a pressure roller with a spring located on top of the drum.

The cable 7 of the winch is fixed on the hook 12 with a wedge 11. This allows you to remove the hook, knocking out the wedge, and give the cable back.

A wedge 3 is installed on the right side member of the frame, which serves to secure the front end of the cable when pulling the car back using the pulley. 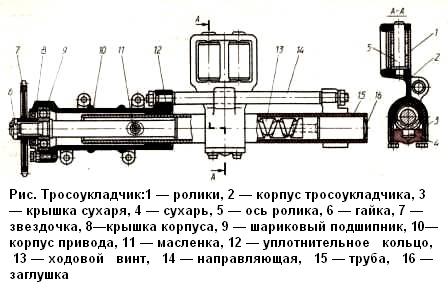 The winch drive is controlled remotely, electro-pneumatically, by a switch installed on the instrument panel in the cab with a backup switch located there.

The winch drum shaft can be disconnected from the gear mechanism by turning lever 14, while the engagement clutch disengages from the gear worm wheel.

When using the winch, the following rules must be observed:

To wind the cable on the drum, turn on the first gear in the gearbox. In case of forced unwinding of the cable, reverse gear should be engaged.

When self-pulling the car, you should unwind the cable, hook it to a tree or other support, turn on the winch and first gear in the gearbox.

To increase the efficiency of self-pulling when the cable is extended forward, it is allowed to turn on the first (lower) gear in the transfer case, having previously blocked the center differential.

When self-pulling back using a block, it is necessary to knock out the wedge, release the cable from the hook and secure it with a wedge on the right side member of the frame.

To achieve the greatest traction force on the hook, it is recommended to pull up with the maximum unwound cable, but at the same time, at least 3...4 turns must remain on the drum.

To prevent accidental activation of the winch in this position of the cable, after laying the cable and turning off the winch, also set the backup switch to the “Off” position.