The main units and components of the cooling system include: a radiator, a fan with a viscous or hydraulic drive clutch, a fan casing, a fan shell, a water channel housing, a water pump, thermostats, channels and connecting pipelines for coolant passage.

Scheme of the cooling system with a fan coaxial to the crankshaft and with a viscous fan drive coupling is shown in Figure 1. 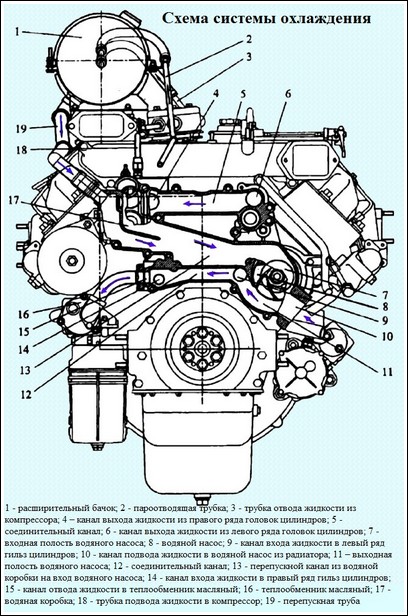 While the engine is running, the coolant circulation in the system is created by the water pump 8 .

From the cylinder heads, the heated fluid enters through channels 4, 5 and 6 into the water box of the water channel housing 17, from which, depending on the temperature, it is sent to the radiator or to the pump inlet.

Part of the liquid is discharged through channel 15 to the oil heat exchanger 16, where heat is transferred from the oil to the coolant.

From the heat exchanger, the coolant is directed to the water jacket of the cylinder block in the area where the fourth cylinder is located.

The nominal temperature of the coolant in the system during engine operation is 75...98 °С.

The thermal regime of the engine is controlled automatically: by two thermostats and a viscous clutch of the fan drive, which control the direction of the fluid flow and the operation of the fan, depending on the temperature of the coolant at the engine outlet and the air temperature at the outlet of the radiator.

The body of the water channels (picture 1) is cast from an iron alloy and bolted to the front end of the cylinder block. 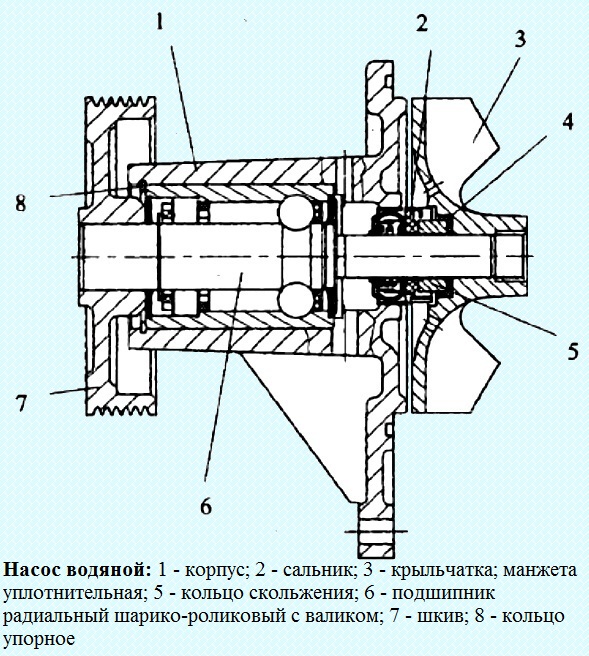 The water pump (picture 2) is of centrifugal type, mounted on the body of the water channels.

A double-row radial ball-roller bearing with roller 6 is pressed into housing 1. The ends of the bearing are protected by rubber seals on both sides. Grease in the bearing is included by the manufacturer

Replenishment of grease in operation is not required. The thrust ring 8 prevents the movement of the outer race of the bearing in the axial direction. Impeller 3 and pulley 7 are pressed onto the ends of the bearing shaft.

The stuffing box 2 is pressed into the pump housing, and its sliding ring is constantly pressed by a spring against the sliding ring 5, which is inserted into the impeller through a rubber cuff 4.

Leaking fluid from the bottom hole indicates a seal failure.

In operation, both holes must be clean, as clogging of them will lead to failure of the bearing. 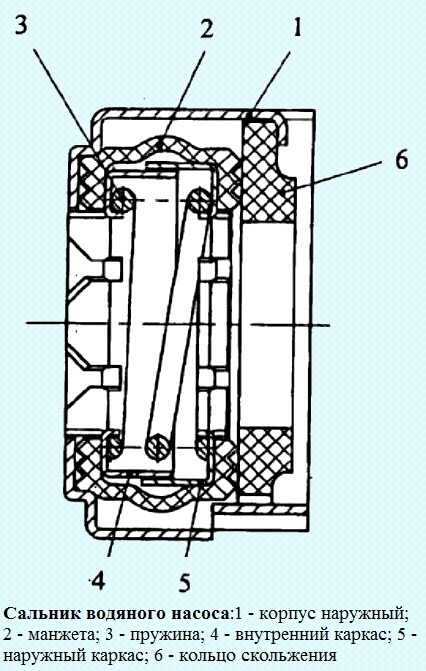 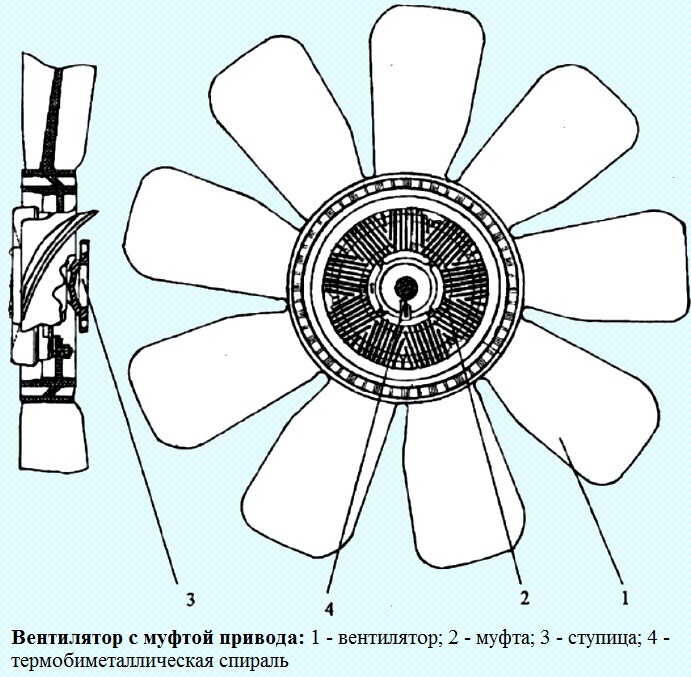 The water pump stuffing box (Figure 3) consists of a brass outer case 1, into which a rubber cuff 2 is inserted

The sliding ring is made of graphite-lead hard-pressed anti-friction material.

The nine-blade fan 1 with a diameter of 660 mm is made of glass-filled polyamide, fan hub 3 - metal.

To drive the fan, an automatically activated viscous clutch 2 is used, which is attached to the fan hub 3.

The principle of operation of the clutch is based on the viscous friction of the fluid in small gaps between the driven and leading parts of the clutch. High viscosity silicone fluid is used as the working fluid.

The coupling is non-separable and does not require maintenance in operation.

The clutch is activated when the air temperature at the outlet of the radiator rises to 61...67 °C. The operation of the clutch is controlled by a thermobimetallic spiral 4.

Fan shroud, fan shroud contribute to an increase in the flow rate of air blown by the fan through the radiator. The fan casing and the fan shell are connected by an annular rubber seal of the U-shaped section.

The radiator is copper-brazed, to increase heat transfer, the cooling tapes are made with louvered slots, it is attached with side brackets through rubber cushions to the frame side members, and by the lower link to the first cross member of the frame. 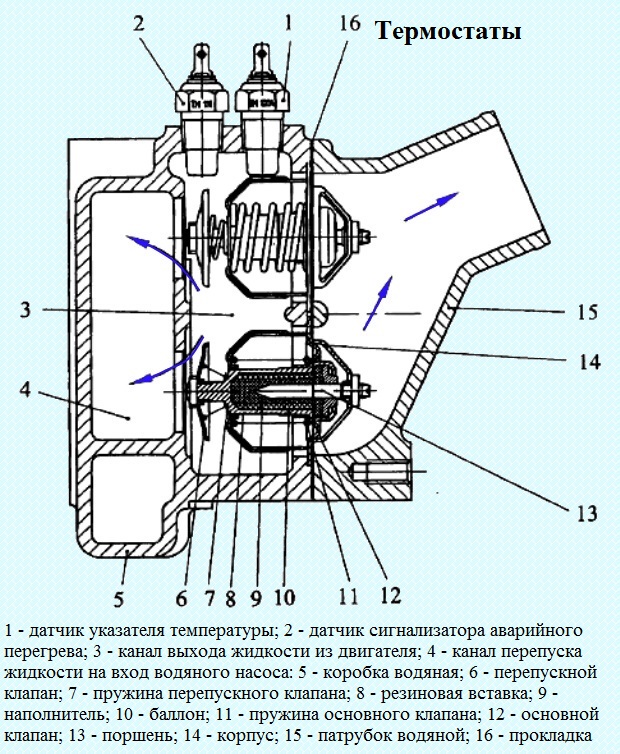 Thermostats (Figure 5) allow you to accelerate the warm-up of a cold engine and maintain the coolant temperature at least 75 ° C by changing its flow through the radiator.

In the water box 5 of the body of the water channels, two thermostats are installed in parallel with the temperature of the start of opening (80 ± 2) ° С.

When the coolant temperature is below 80 °C, the main valve 12 is pressed against the body seat 14 by the spring 11 and closes the coolant passage to the radiator.

The bypass valve 6 is open and connects the water box of the water channel housing through the bypass channel 4 to the water pump inlet.

When the coolant temperature is above 80 °C, the filler 9, located in the cylinder 10, begins to melt, increasing in volume.

The filler consists of a mixture of 60% ceresin (petroleum sock) and 40% aluminum powder.

The pressure from the expanding filler through the rubber insert 8 is transmitted to the piston 13, which, squeezing outward, moves the cylinder 10 with the main valve 12, compressing the spring 11.

Between body 14 and valve 12 opens

annular passage for coolant to the radiator. At a coolant temperature of 93 ° C, the thermostat opens completely, the valve rises to a height of at least 8.5 mm.

Simultaneously with the opening of the main valve, the bypass valve 6 moves along with the cylinder, which closes the hole in the water box of the water channel housing, connecting it to the water pump inlet.

When the coolant temperature drops to 80 °C and below, under the action of springs 7 and 11, valves 12 and 6 return to their original position.

To control the coolant temperature, two temperature sensors 1 and 2 are installed on the water box of the water channel housing.

Sensor 1 outputs the current coolant temperature to the instrument panel, sensor 2 serves as an indicator of coolant overheating.

When the temperature rises to 98-104 ° C, the warning lamp for emergency coolant overheating lights up on the instrument panel.

Expansion tank I (Figure 1) is installed on the engine of KAMAZ vehicles on the right side along the vehicle.

The expansion tank is connected by a bypass pipe 19 to the inlet cavity of the water pump 13, a steam outlet pipe 2 to the upper tank of the radiator and to a pipe for draining liquid from the compressor 3.

The expansion tank serves to compensate for changes in the volume of the coolant when it expands from heating, and also allows you to control the degree of filling of the cooling system and helps to remove air and steam from it.

The expansion tank is made of translucent propylene copolymer. 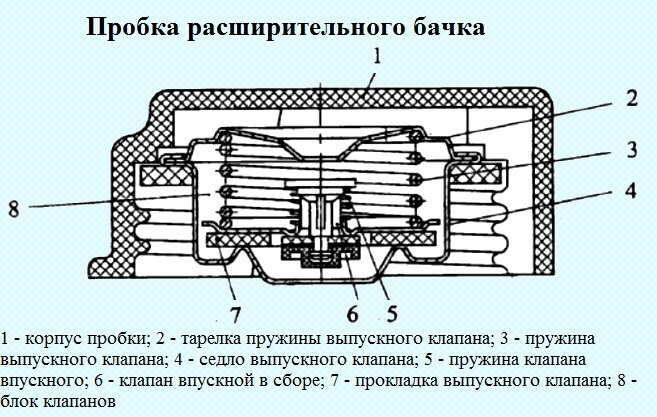 A plug of the expansion tank is screwed onto the neck of the tank (Figure 6) with inlet 6 (air) and outlet (steam) valves.

The exhaust and intake valves are combined into a valve block 8. The valve block is not separable.

The exhaust valve, loaded with spring 3, maintains an excess pressure of 65 kPa (0.65 kgf / cm2) in the cooling system, the inlet valve 6, loaded with a weaker spring 5, prevents the creation of a vacuum in the system when the engine cools down.

The engine coolant is filled through the filler neck of the expansion tank. Before filling the cooling system, you must first open the tap of the heating system.

To drain the coolant, open the drain valves of the lower elbow of the water pipeline, the heat exchanger and the preheater pump unit, and unscrew the cap of the expansion tank.

It is not allowed to operate the vehicle without the expansion tank plug. 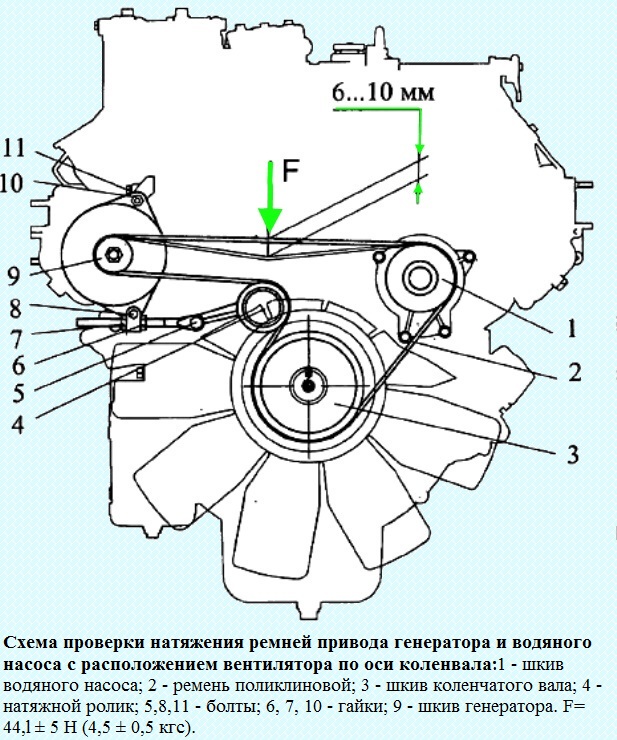 To adjust the tension (Figure 7) of the poly-V-belt 2 of the drive of the generator and the water pump for engines with the fan located along the axis of the crankshaft, perform as follows:

For bonneted vehicles, the engine can be equipped with a fan drive hydraulic clutch located 325 mm above the crankshaft axis.

The scheme of operation of the system is similar to that described above, the design features of this configuration of the engine and its components are visible in Figures 8, 9, 10, 11.

To maintain the optimum thermal regime of the engine and save fuel, the fan is driven through a hydraulic clutch, which is switched on and off automatically depending on the temperature of the liquid in the engine cooling system. 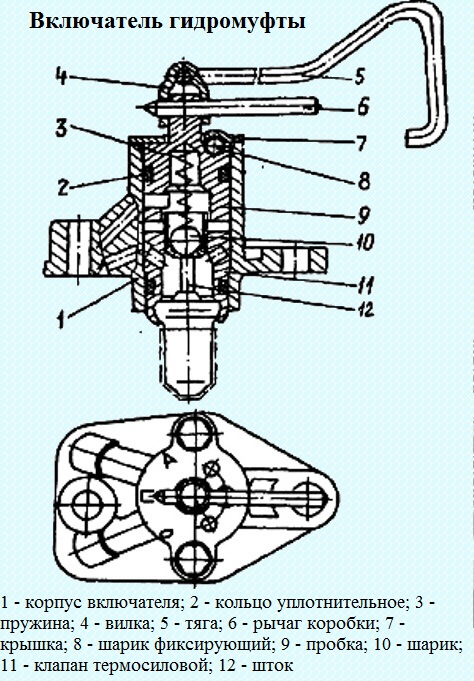 The fan speed depends on the amount of oil entering the fluid coupling through the switch (Figure 9).

It is installed in front of the engine on the pipe that supplies coolant to the right row of cylinders.

Thrust 5 plug 9 can be installed in three positions indicated by marks on the body:

When the temperature of the coolant rises to 85 ... 90 ° C, the stem 12 of the thermal power valve 11 moves the ball 10. Through the communicating cavities of the switch, oil is supplied to the fluid coupling cavity.

Further, through the channels in the drive shaft, the oil enters the interblade space and turns on the fan, the oil from the working cavities of the wheels is drained through the holes in the casing.

When the coolant temperature drops below 85 °C, the ball 10, under the action of the return spring 3, closes the hole in the valve 11 and turns off the fan.

Thanks to this, the most favorable engine temperature is maintained, and the power consumption for the fan drive is reduced.

If the hydraulic clutch switch fails during operation in automatic mode (characterized by engine overheating), forcibly turn on the fan by setting plug 9 to the "P" position and, as soon as possible, eliminate the malfunction of the switch. 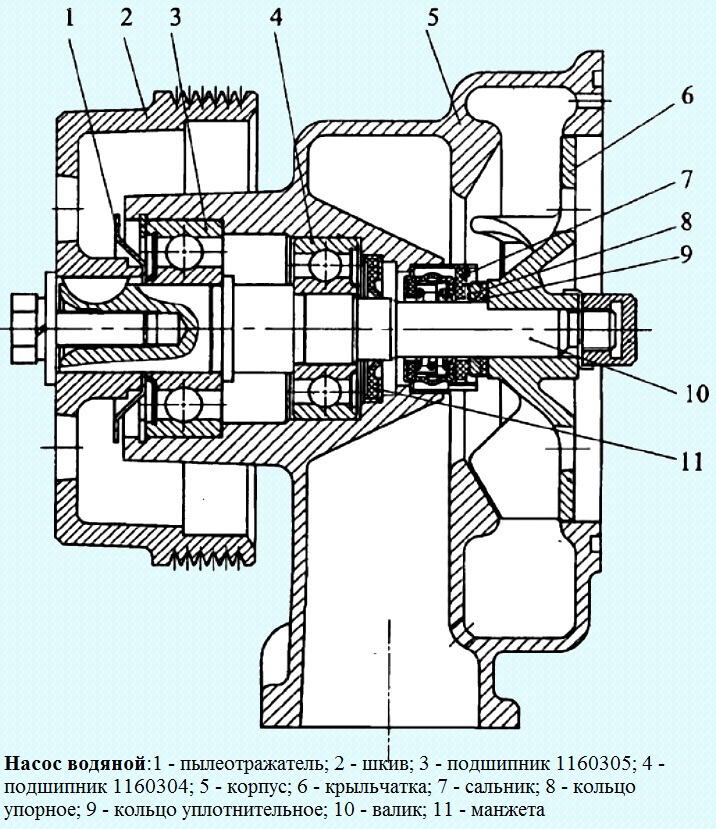 The water pump used on engines with a fluid coupling, (figure 10) of the centrifugal type, is installed on the front of the cylinder block on the left.

Shaft 10 rotates in bearings 3 and 4 with one-sided rubber seal. For additional protection against the penetration of coolant into the bearings, a rubber cuff 11 is installed.

The stuffing box 7 prevents the coolant from flowing out of the pump cavity. The stuffing box is pressed into the pump housing 5, and its graphite ring is constantly pressed against the thrust steel ring 8 by a spring.

A seal is installed between the thrust ring and the impeller 6 solid rubber ring 9 in a thin-walled brass cage.

High quality manufacturing of the ends of the graphite and thrust ring provides a reliable contact seal of the pump cavity.

The cavity between the bearings is filled with Litol-24 grease, which should be periodically replenished during operation (at TO-2) using a grease fitting until it appears from the control hole.

There is a drain hole in the pump housing to check the health of the mechanical seal. A noticeable leak of fluid through this hole indicates a pump seal failure.

Clogging of the hole is not allowed, as it leads to failure of the bearings.

Axial-type fan, metal, eight-blade, 660 mm in diameter, is attached with four bolts to the fan hub 1 of the fluid coupling driven shaft (Figure 8). 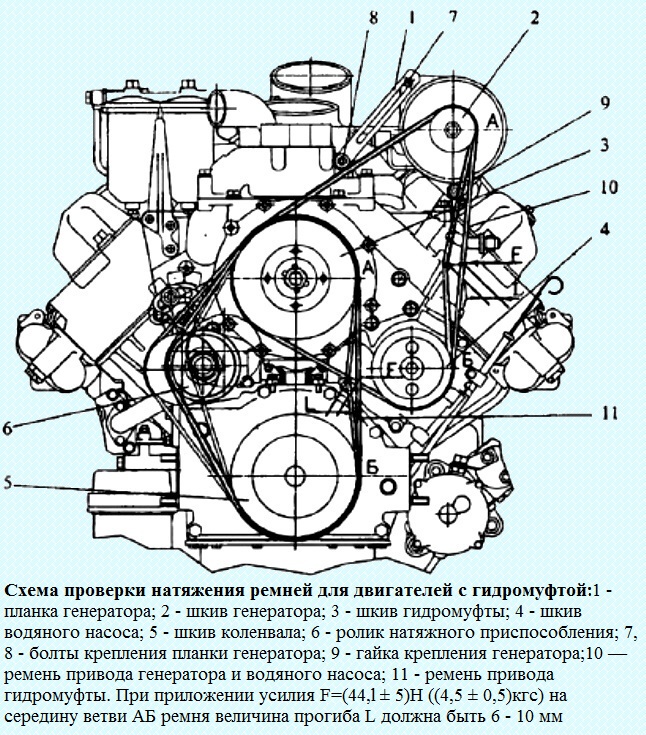 Adjusting the tension of the V-ribbed belt for engines with a fan located above the crankshaft axis is shown in Figure 11.

The tension of the hydraulic clutch drive belt 11 is adjusted by moving the tension roller 6.

To tension the belt 10 of the drive of the generator and the water pump, perform as follows: 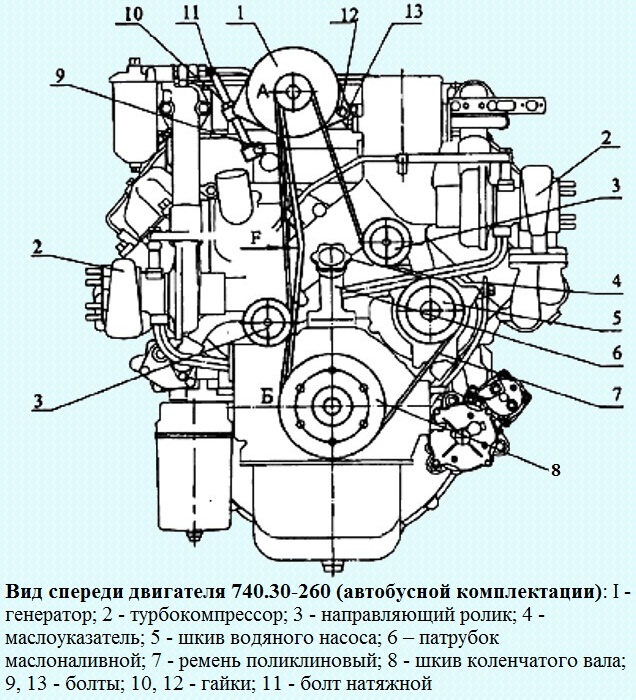 Adjust the tension of the V-ribbed belt for engines 740.30-260 of the bus configuration (Figure 12) by changing the position of the generator I in the following sequence: