All devices designed to start car engines at negative ambient temperatures are divided into two types: devices. providing start-up of a cold engine, and devices providing it with pre-heating

The first type of devices makes it possible to start the engine without a preliminary change in its thermal state, the second one changes the thermal state of the engine before starting by heating it to a temperature at which a reliable start is possible.

Both types of devices are used on KamAZ engines. As the first, an EFU electric torch device is used; as the second, a pre-heater.

The preheater is a device designed to provide a general warm-up of the engine before starting at negative ambient temperatures.

The heater is mounted directly on the car and works autonomously, regardless of the engine, using only the electric power of the cars batteries.

This is a flame heater (Fig. 1), in which, due to the heat released during the combustion of liquid fuel, the heat carrier of the engine cooling system is heated.

The coolant, constantly circulating through the heater heat exchanger, heats up and transfers heat, giving it to engine parts.

At the same time, the oil in the oil sump is heated by the outlet! exhaust gases. 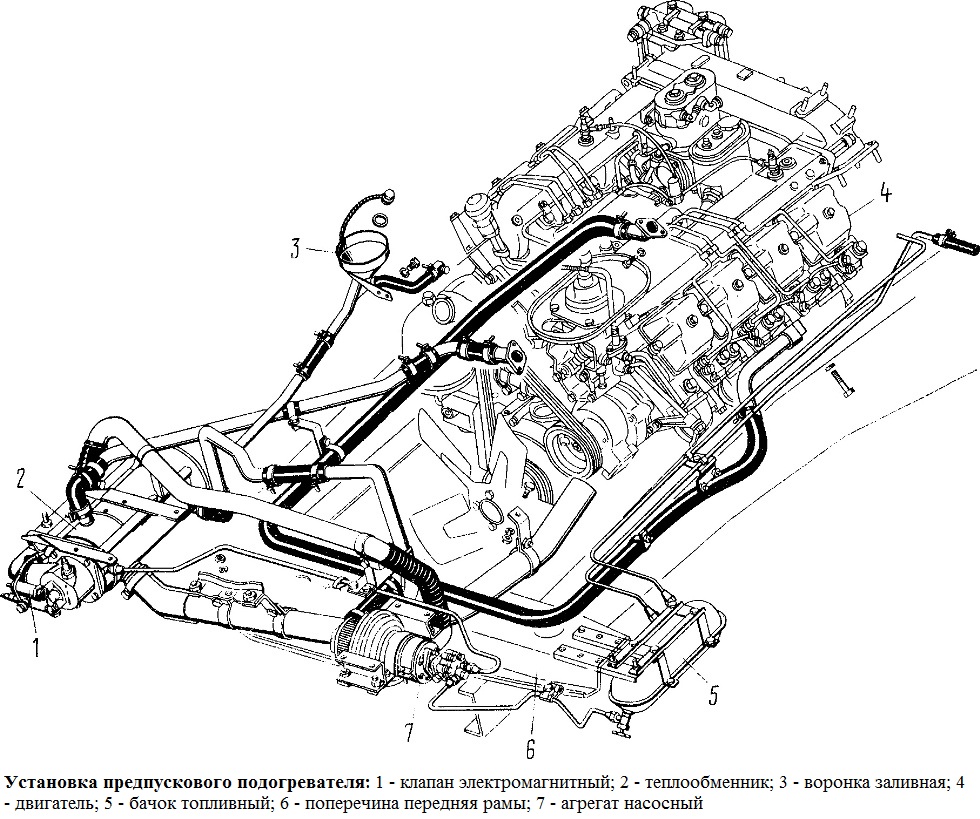 The heater is installed under the front cross member 6 (fig.) of the vehicle frame and includes a boiler 2 with a burner, an electromagnetic fuel valve 1 with a nozzle and an electric fuel heater, a pump unit 7 with an electric motor, a fan, a liquid and fuel pump, an electric spark ignition system fuel mixture and heater remote control system.

The heater is powered from a special fuel tank 5, which is filled automatically when the engine is running.

When the engine is not running, the reservoir can be filled with a manual fuel priming pump installed on the injection pump. 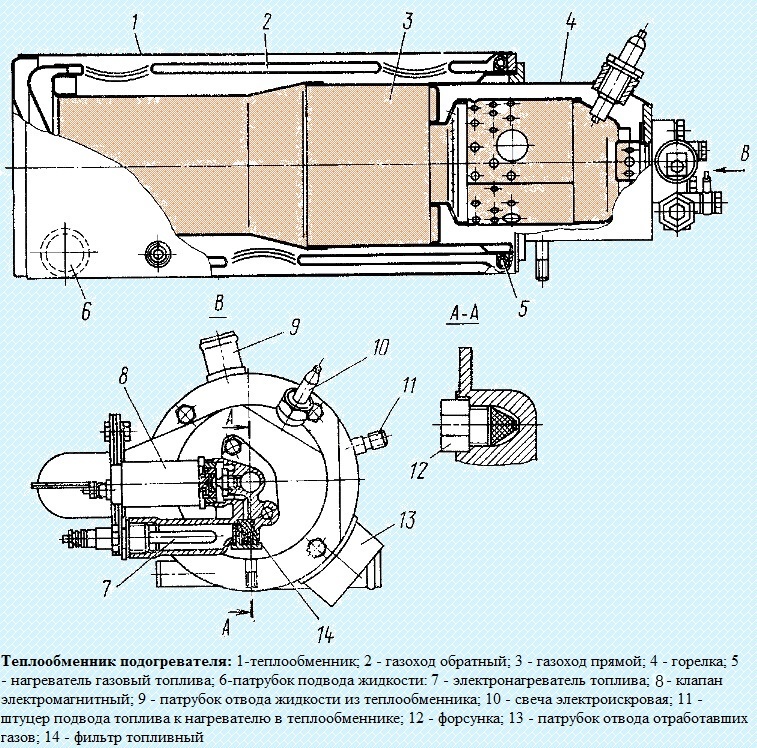 The heater boiler (Fig. 3) is made of stainless steel sheet and is designed to transfer the heat of the liquid circulating through it.

According to the principle of operation, the boiler is a recuperative heat exchanger (heat is transferred from the combustion products to the coolant through a solid wall separating them) and consists of two liquid jackets and two gas ducts.

Combustion products from the burner are sent to the direct gas duct, then they enter through the return gas duct and are discharged from the boiler to the engine crankcase for oil heating.

A heater is installed at the outlet of the return gas duct, which heats the fuel supplied to the nozzle to a temperature of 60 ... 80 ° C with exhaust gases.

The burner is removable, bolted to the boiler. This allows periodically or as needed to clean the internal surfaces of the burner and the boiler flue from carbon deposits.

In the combustion chamber of the burner, in the zone of its mixture formation, a combustible mixture is prepared, consisting of fuel and air, it ignites and burns.

The air supply to the burner is carried out in the direction perpendicular to its axis. This provides airflow to the end of the nozzle and spark plug, reducing carbon formation on their surfaces.

The spark plug (Fig. 4) of the heater differs from a conventional automobile spark plug by a side electrode, the role of which is played by the outer shield 3.

The presence of a screen around the central electrode makes it possible to receive a spark discharge in any part of the circumference of the screen, thereby increasing the reliability of the candle in conditions of work in a zone of increased carbon formation.

The length of the candle is chosen so that the spark discharge zone is in the fuel spray zone of the nozzle.

Hpump unit is a device consisting of a fan (supercharger), fuel and liquid pumps driven from one motor

The fuel pump, which has a self-contained housing, is fixed on the opposite side of the electric motor

The impeller is mounted on the motor shaft and secured with a nut.

On the fan side, the working cavity of the pump is sealed with a rubber cuff.

A centrifugal fan supplies air to the heater burner.

The fan impeller is mounted on the motor shaft on the key and secured with a nut.

The pump shaft on the motor side is sealed with a rubber cuff. The drive gear shaft of the pump is connected to the motor shaft by an elastic coupling.

The supply of the fuel pump is regulated by a pressure reducing valve, which ensures the bypass of fuel from the pumps discharge cavity to the suction cavity.

The electric spark ignition system is designed to provide a spark discharge in the burner when the heater is started. 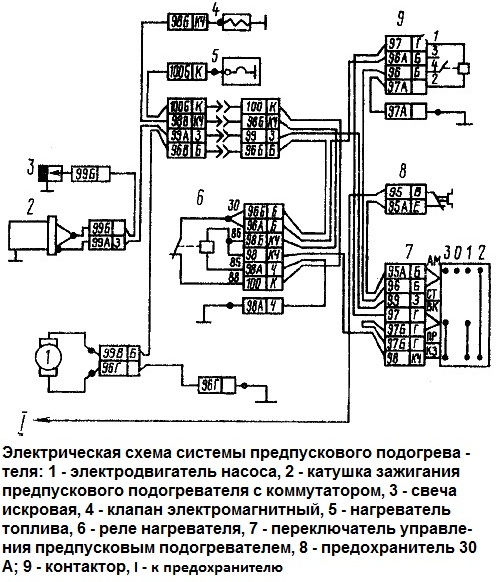 Ignition of the fuel mixture in the heater burner is carried out by a high-voltage discharge, which is formed between the electrodes of candle 3.

High voltage on the electrodes of the candle is created by a transistor switch with an induction coil 2.

The remote control system for the heater makes it possible to control the operation of the heater, both in the working position of the car cab and with the cab raised.

Switch 7 for controlling the operation of the heater, mounted on a bracket in the cab, has four possible positions:

The heater works as follows. The fuel pump of the heater takes fuel from the tank, which is fed through the open solenoid valve to the nozzle and injected into the internal cavity of the burner.

Atomized fuel mixes with air supplied by the fan, ignites and burns, heating the coolant in the heat exchanger.

Fuel combustion products are directed through the exhaust pipe under the engine oil sump and heat the oil in it.

When checking the operation of the starting preheater, do not allow leakage of coolant and fuel in the pipe connections and taps.

Normal operation is determined by a uniform hum of combustion in the heat exchanger and the exit of exhaust gases without smoke and open flames.

If necessary, adjust the fuel flow with the fuel pump pressure reducing valve in the following order:

After adjusting, lock the adjusting screw with the locknut and screw on the cap nut.

To ensure normal operation of the heater, the fuel supply should be regulated at negative ambient temperatures (not higher than minus 5ºС).

After washing the car and overcoming the ford in the cold season, remove the water that has entered the air path of the fan by turning on pump unit for 3-4 minutes, to do this, turn the switch knob to position III, after disconnecting the wire of the electric fuel heater.