The brake drive of the trailer (semi-trailer) of the tractor vehicle is combined (single-wire and two-wire), 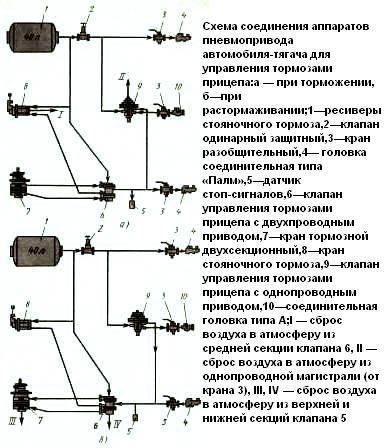 The trailer brake drive is powered from receivers 1 of the parking and spare brake drive circuit.

It consists of three sections: 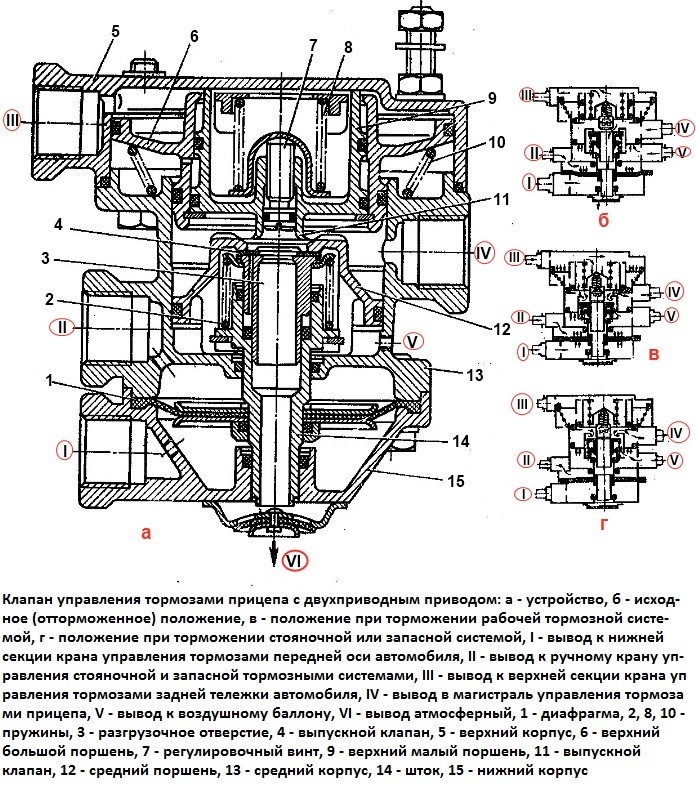 In addition, there are two more terminals in the middle section: terminal V is connected to the air tank of the parking and spare brake systems; output IV- with a control line of a two-wire drive and a trailer brake control valve with a single-wire drive.

The valve controls the brakes of the trailer - it supplies compressed air from the source (terminal V) to the consumers (terminal IV) - with three commands independent of each other, acting simultaneously and separately; at the same time, a direct action command is sent to terminals I, III (to increase pressure when air is supplied by a two-section brake valve), to terminal II - a reverse action command (to reduce pressure when air is released by a manual brake valve)

The main parts of the valve are: upper 5, middle 13 and lower 15 of the body (sections); large 6 and small 9 upper pistons with their springs 10 and 8, respectively; middle piston 12 with inlet valve 4, constantly pressed against the piston seat by a spring, and rod 14; exhaust valve 11; discharge opening 3.

In the braked position (Fig. 2 b), compressed air is constantly supplied to terminals II and V, which, acting from above on diagram 1 and from below on piston 12, holds rod 14 together with piston 12 in the lower position, since the diaphragm area more piston area

At the same time, the output of IV through the discharge holes 3 of the valve and the stem

When braking (Fig. 2, c), compressed air from the brake valve section is supplied to terminals I and II.

Under the action of compressed air supplied to terminal I, the stem 14, together with the middle piston 12 and valve 4, moves up.

Compressed air supplied to terminal III moves the upper pistons 6 and 9 down, compressing the spring 10.

In this case, the exhaust valve 11 sits in the valve seat 4, separating the output IV from the atmospheric output VI, and then separates the valve 4 from the seat of the middle piston 12

When braking (Fig. 2, b), compressed air is discharged through the atmospheric opening in the brake valve from terminals I and III.

Pistons 6 and 9 under the action of spring 10 and compressed air occupy the upper position, rod 14 with piston 12 - the lower position.

When compressed air is supplied to terminals I or III separately, the rod 14 with piston 12 moves up, respectively, or the large 6 and small 9 pistons move down.

Braking and braking is the same as already described

When braking, the spare or parking brake The car's heat system (Fig. 2, d) releases compressed air from outlet II through the atmospheric opening in the reverse-acting manual brake valve into the atmosphere.

The pressure above the diaphragm 1 drops and thereby reduces the force acting on the diaphragm and, together with it, on the rod 14 and piston 12 from above.

Under the action of a constant pressure of compressed air supplied to terminal V, the piston 12 moves upwards together with the rod 14.

At the same time, valve seat 4 rests against valve 11, separating port IV from the atmosphere, and then valve 4 comes off piston seat 12 and port IV communicates with port V.

Compressed air enters the controlled line of the trailer

The excess pressure is regulated by screw 7 (Fig. 2, a): when the screw is screwed in, the excess increases, when it is screwed out, it decreases.