Mechanical all-mode direct-acting speed controller with overdrive for the load drive, designed to maintain the engine speed set by the driver by automatically changing the amount of fuel supplied depending on the change in load 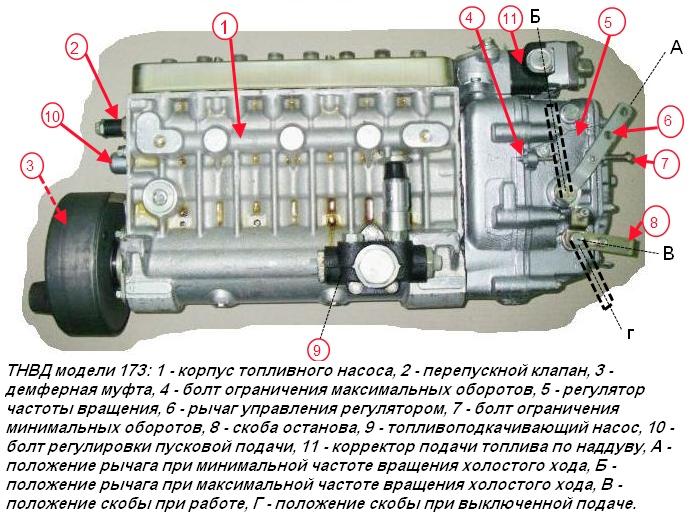 In addition, the governor limits the maximum engine speed and keeps the engine idling.

The regulator has a device to turn off the fuel supply at any time, regardless of the engine operating mode.

By automatically maintaining the speed mode under changing loads, the governor ensures economical operation of the engine.

The device of the speed controller is shown in fig. 2.

The regulator is located on the rear end of the high pressure fuel pump. On the cone of the camshaft there is a drive gear 27 with a damping device.

The rotation from the pump shaft to the drive gear is transmitted through rubber crackers 28. The driven gear is made as one piece with the roller 29 of the load holder and is mounted on two bearings in the glass 30.

The weights with their rollers rest against the end of the clutch 23, which, through the thrust bearing and the heel 22, transmits the force of the weights to the regulator lever 17, suspended together with the two-arm lever 5 on the common axis 2.

The heel of the weight coupling is connected through the negative corrector assembly with the rail lever 20 and through the rod 32 with the fuel pump rail.

The rack lever spring 6 is attached to the top of the rack lever, holding the pump rack in the position corresponding to the maximum flow, which provides increased fuel supply when starting the engine.

A finger is pressed into the lower part of the rack lever, which enters the hole of the backstage slider 21.

Adjusting bolt 10 is screwed into the regulator lever, which rests against the shaft of the spring lever and serves to adjust the nominal fuel supply.

In the lower part of the regulator lever there is a corrective device (12, 13, 14, 16, 18) with a negative corrector, designed to form the external speed characteristic of the injection pump and engine torque.

The regulator lever is equipped with a side pad that holds the sleeve 16 of the reverse corrector and the thrust heel 22 from rotation.

In addition, the shank of the side cover bolt, entering the side longitudinal groove of the sleeve, prevents it from falling out of the lever bore.

The stop 34, fixed on the regulator body, prevents the spring lever 31 from dangerously approaching rotating loads.

To completely turn off the fuel supply, a stop mechanism is used, consisting of a backstage 21, a bracket 15 and a return spring. During operation, the link is pressed against the adjusting screw by the force of the return spring.

At the back, the regulator cover is closed by a cover 3 of an inspection hatch with a buffer device consisting of a body 9 and a spring 8, which, by smoothing the oscillations of the regulator lever 17, ensures stable operation of the engine at idle.

When the engine is not running, the regulator weights are in the reduced position, and the rail 33 under the action of the spring 6 of the rail lever is in the maximum feed position (leftmost position).

When starting the engine, when the crankshaft speed reaches 460...500 min-1 (the control lever rests against the minimum speed limit bolt), the regulator weights overcome the resistance of the lever spring under the action of centrifugal force slats and shift through the cargo clutch 23 the lever of the slat 32 until the stop of the sleeve 16 of the negative corrector into the regulator lever.

When you press the control pedal, the regulator control lever and the spring lever 31 rigidly connected to it rotate at a certain angle, which leads to an increase in the tension of the regulator spring.

Under the influence of the spring, the lever 17 of the regulator moves the lever system, the weight clutch and the rail in the direction of increasing the feed, and the engine speed increases.

Thus, each position of the governor control lever corresponds to a certain number of engine revolutions.

When the total moment of resistance to the movement of the car decreases, the engine speed increases. In this case, the centrifugal force of the loads increases.

The weights diverge and, overcoming the force of the regulator spring, move the weight clutch 23 and the heel 22.

In this case, the lever system and the rack will move in the direction of decreasing feed (to the right) until the engine speed is set, set by the position of the control lever, i.e. until there is an equilibrium between the centrifugal force of the weights and the spring force of the regulator.

With an increase in the total moment of resistance to the movement of the car, the crankshaft speed decreases, therefore, the centrifugal force of the regulator weights also decreases.

With the force of the spring 4 of the regulator, the lever system, the heel and the weight clutch will move to the left and move the rail to the left, in the direction of increasing the feed.

The delivery of fuel in sections increases until the engine speed reaches the value set by the position of the governor control lever.

The engine is stopped by turning the link bracket 15 down. In this case, the link 21 and the lower end of the lever 20 of the rail turn to the left, the pump rail extends to its extreme position, and the fuel supply stops.

The negative corrector (12, 13, 14, 16, 18) provides a gradual decrease in the cyclic fuel supply when the pump camshaft speed is reduced to 500 min -1 and thus ensures smokeless engine operation.

At a crankshaft speed corresponding to the nominal one, the centrifugal force of the weights exceeds the preload force of the corrector spring 14, and the heel rests against the main regulator lever through the corrector 12 and sleeve 16.

At the same time, the corrector 12 moves out of the sleeve 16 and, moving the weight clutch and the lever system, shifts the high-pressure fuel pump rail in the direction of reducing the cyclic fuel supply.

At 500 min-1, the value of the cyclic fuel supply limitation is the largest, its value is determined by the maximum value of the correction protrusion.

The speed controller is equipped with a fuel boost corrector 1 to reduce the heat density and smoke in diesel exhaust gases at low speeds and transient conditions.

In addition, the corrector protects the engine in emergency situations that occur when the turbocharging system fails.

The principle of operation of the boost corrector is that when the boost air pressure decreases, it acts on the fuel pump rail, reducing the fuel supply. 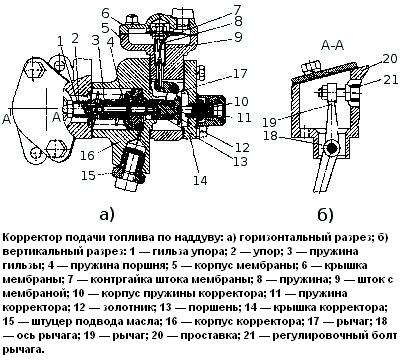 The boost adjuster (Fig. 3) is mounted on top of the regulator body. The corrector housing 16, the membrane housing 5 and the corrector cover 14 are attached to the spacer 20 with bolts.

At one end of the lever there is an adjusting bolt with a nut, and the other end, when the corrector is working, directly acts on the injection pump rail.

In the membrane housing there is a membrane made of a special fabric, assembled with a stem 9, closed with a cover 6.

The cover has a hole for air supply from the intake manifold but the engine. The lever 17, mounted on the axis, serves to transfer movement from the stem to the spool 12. The corrector spring 11 rests against the spool.

To change its pre-compression, a spring body 10 is screwed into the cover 14 of the corrector.

A lock nut and a cap are screwed onto the body. A fitting 15 for supplying oil from the engine lubrication system is screwed into the body of the corrector.

The mating parts of the boost corrector are sealed using paronite gaskets.

When the engine is not running, there is no oil pressure in the lubrication system and air in the intake correctors. Spring 4 presses piston 13 with stop 2 to corrector body 16.

The corrector spring 11 presses the spool 12 and the stem 9 with the membrane until it stops against the membrane cover.

When the engine enters the idle mode, the injection pump rail moves from the starting position to the side of the feed reduction. Following the rail, under the action of the spring 3, the sleeve 1 moves, turning the lever 19.

Movement of the sleeve relative to the stop leads to the overlap of the drain windows of the stop, as a result of which free drainage stops, the oil pressure in the under-piston cavity increases, and the piston begins to move to the left to its working position.

When the engine is running under load, and the crankshaft speed increases, the air pressure in the membrane cavity increases.

Following the piston and stop under the action of the starting spring, the injection pump rail moves. Thus, an increase in air pressure in the membrane cavity leads to an increase in the cyclic fuel supply.

In the under-piston cavity, the oil pressure increases, the piston moves to the left until the drain windows open, and through stop 2 and lever 19 shifts the rail in the direction of decreasing feed.

The amount of rack movement and the change in the cyclic feed is determined by the pressure drop in the membrane cavity and the characteristics of the corrector spring.

When the inflation pressure is increased to about 0.06 MPa (0.6 kgf / cm2), the feed restriction by the corrector is removed.

When the engine is stopped, the corrector automatically switches on the starting feed.

Dismantling the boost corrector together with spacer 20 in operation is not recommended, since then incorrect installation of lever 19 relative to the rail is possible, leading to engine overshoot.

If it is necessary to dismantle (for example, during repair), during the subsequent installation of the corrector on the regulator, move the pump rail to the off-feed position with the engine backstage bracket and insert the corrector with a spacer into the regulator housing.

Then release the backstage bracket. After that, it is necessary to check the adjustment of the boost corrector, as well as check the regulator to turn off the fuel supply.

Basic adjustments provided by the design of the regulator

The maximum idle speed (the beginning of the rack ejection) is regulated by bolt 4 (Fig. 1).

The pretension of the spring (the difference between the revolutions of the end and the beginning of the ejection of the rail) is adjusted by screw 7 (Fig. 2).

To the features adjustment should include the fact that in order to ensure a reduced force on the control lever, the spring lever, when adjusting the speed of rotation of the start of the regulator, should be as close as possible to the stop in the regulator housing, which limits its rotation.