The fuel pump is installed between the cylinder banks and is driven by the camshaft gear through an automatic fuel injection advance clutch.

For two revolutions of the crankshaft, the camshaft of the pump makes one revolution.

The operation of the pump is controlled by the driver from the cab and is automatically adjusted by the all-mode crankshaft speed controller depending on the engine load.

The regulator is built into the design of the pump. 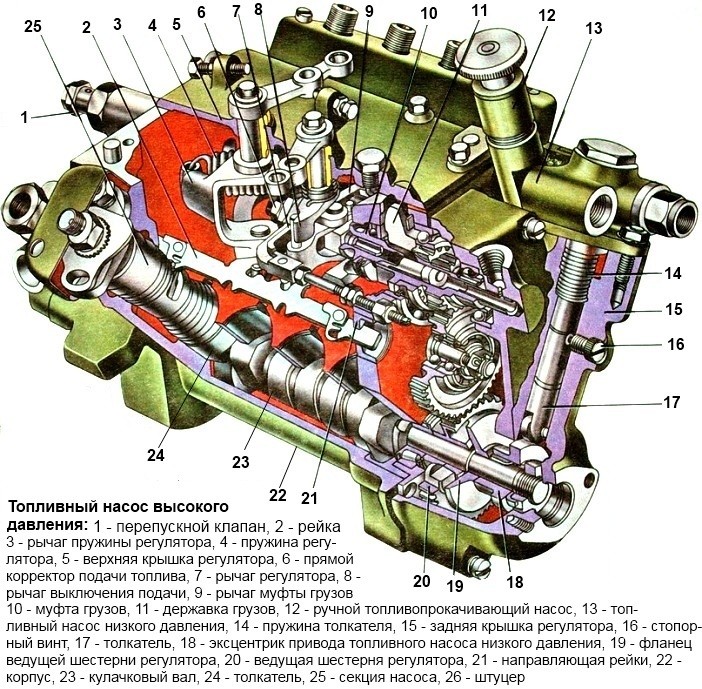 The main parts of the high pressure pump (Fig. 1.) are the housing 22, the cam shaft 23 and eight discharge sections, each of which serves one cylinder. The pump body is V-shaped, the sections in it are located at an angle of 75 °.

This design reduces the length of the camshaft and increases its rigidity.

The camshaft of the pump is mounted on two tapered roller bearings.

The outgoing end of the shaft is sealed with a rubber collar.

On the same side, a fuel injection advance clutch is fixed on the tail of the shaft, through which the pump is driven, and gears 20 of the speed controller drive, a damper and an eccentric 18 for driving the low-pressure fuel pump are fixed on the rear end of the shaft.

Pushers 24 are installed in the lower part of the housing and are fixed against rotation with crackers that enter the grooves made in the sockets.

Next to the sections, two rails are installed in the guide bushings 21: left and right.

On the one hand, each rail is connected to four bushings of the injection pump sections, and on the other hand, it is engaged with the levers of the crankshaft speed controller, which controls the amount of fuel supplied.

Fuel is supplied to the high pressure pump from the fine filter through a fitting and a hollow bolt, with which it is connected to the low pressure fuel line.

Fuel circulates through inlet and outlet channels drilled in the housing along each row of injection sections.

The pressure in the channels is maintained within 50..110 kPa by a ball bypass valve 1, which is installed on the front wall of the housing. 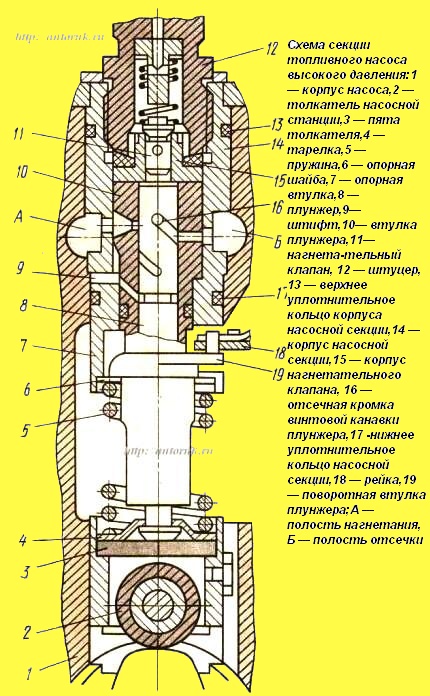 Each section of the high pressure fuel pump consists of a plunger 8 (Fig. 2) and a sleeve 10, which are individually fitted to each other and form a movable connection with a minimum clearance.

Such a precision pair practically does not allow leakage of fuel when it is injected, it cannot be dismantled.

The plunger sleeve is installed in the body of section 14 and is kept from turning by pin 9.

The spring rests at one end through the support washer 6 against the body, and at the other end against the plate 4, which captures the plunger shank and pulls it to the heel 3 of the pusher, without preventing the free rotation of the plunger around its axis.

When the rack moves longitudinally, all plungers turn by one angle.

The axial channel of the plunger is connected by radial holes with two screw grooves. The top edge of a carefully machined groove is called a cut-off.

The opposite, less accurately machined groove is false and equalizes the lateral pressure of the fuel on the plunger, thereby reducing wear on the plunger and bushing.

In the middle part of the plunger, an annular groove is made, which collects the fuel that has leaked through the gap between the sleeve and the plunger.

There is a drain hole in the bushing through which fuel is discharged from the annular groove into the fuel channel of the pump housing.

The lower annular groove on the plunger distributes the leaked fuel over the bushing like a lubricant.

The discharge valve 11 and its body 15 are also a precision pair, separating the over-plunger cavity of the sleeve 10 from the fuel line through which fuel is supplied to the nozzle.

The valve and its body are fixed with a fitting 12 and a spring. The spring presses the valve to the body with one end, and rests against the stop with the other end, which simultaneously serves as a valve lift limiter. 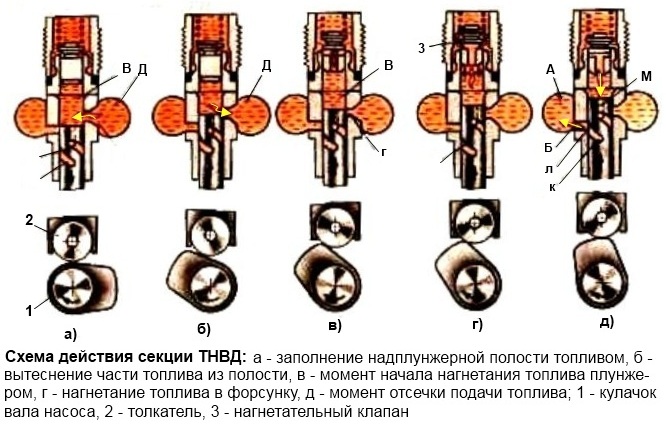 Filling of the above-plunger cavity B (Fig. a) in the sleeve with fuel occurs when the plunger moves down, when it opens the inlet, from this moment the fuel begins to flow into the cavity B above the plunger, since it is under a pressure of 50 ... 110 kPa.

When the plunger moves upwards under the action of the incoming cam 1 (Fig. b), at the beginning, part of the fuel is forced back into channel D, but as soon as the end edge of the plunger blocks the inlet D (Fig. c), the reverse bypass of fuel stops and abruptly the pressure of the remaining fuel locked in the over-plunger cavity increases.

When the pressure reaches 0.9 ... 1.1 MPa, the discharge valve 3 opens (Fig. d), which corresponds to the beginning of the fuel supply, which enters the nozzle through the high-pressure fuel line.

Fuel injection will continue until the cut-off edge A approaches the bottom of the cut-off hole B (fig. e) of the sleeve, connecting the above-plunger cavity with the outlet channel A.

At this moment, the fuel is cut off (quick injection stops), it flows through the axial channel M and groove K of the plunger into the cut-off hole B of the bushing and further into channel A, the pressure above the plunger drops sharply and the discharge valve closes quickly.

When the radial drilling of the discharge valve is completely blocked by the edge of the body, the valve, lowering, begins to suck fuel from the nozzle, so its supply to the nozzle abruptly stops. 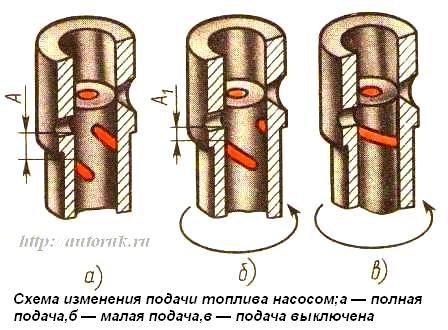 As the engine load changes, the amount of fuel injected into the cylinders should change. It is regulated by changing the active stroke of the plunger with the total stroke unchanged.

The active stroke of the plunger corresponds to the distance A (Fig. 4a) in height from the bottom of the cut-off hole to the cut-off edge at the moment when the plunger blocks the inlet.

If the plunger is turned to the right (fig. 4), its active stroke will be reduced, the cut-off will come earlier and less fuel will be supplied.

If you turn the plunger again in the same direction (Fig. 4c), the groove will be located after the cut-off hole and the over-plunger cavity will be in communication with this hole throughout the plunger stroke. Therefore, fuel will not be supplied to the nozzle, the supply is turned off.

The moment of the beginning of the fuel supply by the section is regulated by selecting the heel 3 (see Fig. 2) of the pusher of the required thickness.

When installing a thicker heel, the fuel starts to flow earlier, a smaller one - later.

Such an adjustment of the pump is carried out on a special stand, where you can also adjust the fuel supply by each section, for which you turn the section housing together with the plunger sleeve (with a fixed rail) by the flange, after loosening the fastening nuts.

When turning the section housing counterclockwise, the cyclic feed increases, clockwise it decreases.