The circuit of the emergency release of the car KAMAZ

On KamAZ-5320 vehicles, air enters the emergency braking circuit (Fig. 1) when the engine is running directly from the compressor through the triple safety valve 13

If the engine is not running, and the pressure in cylinders 1 and 3 of the working brake system is greater than 5.0 ... 5.2 kgf/cm2, the air from these cylinders is supplied to the emergency release valve 12.

The crane (Fig. 2) is installed under the instrument panel. 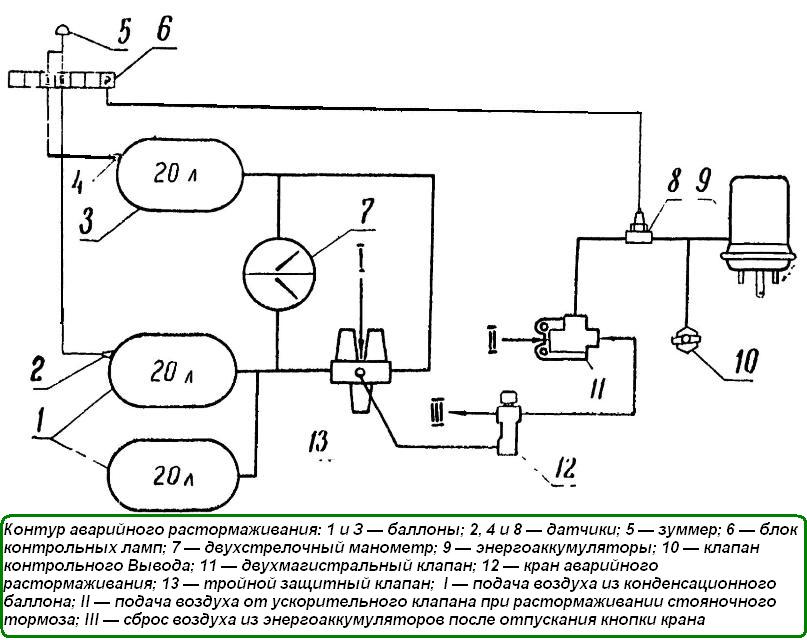 When you press the tap button 12, air is supplied through the tap and the two-way valve 11 to the energy accumulators 9 and the car is braked.

When the engine is not running, there is enough air in the cylinders of the service brake system to release the parking brake three times.

Reducing the pressure in these cylinders to 5.0...5.2 kgf/cm2 closes the valve in the triple safety valve and cuts off the air supply to the emergency release valve.

It must be remembered that to ensure release of the brakes, the pressure in the cylinders must be greater than the specified value by 0.6 ... 0.8 kgf / cm2.

If this excess does not occur, the triple safety valve will cut off the air supply until the energy accumulators are completely released.

On KamAZ-5410 vehicles, air is supplied to the emergency brake release valve directly from the cylinders of the rear bogie service brake circuit.

On these vehicles, the parking brake can be released if the air pressure in the indicated cylinders drops to at least 4.5 kgf / cm2 when released.

In the control lamp unit, the flashing parking brake on lamp and lamp III came on, signaling a pressure drop in the parking brake circuit. At the same time, the car began to lose speed up to a complete stop.

If lamps I and II in the control lamp unit do not light up, and when the emergency brake release valve button is pressed, the flashing lamp goes out, then an air leak has occurred in the parking brake circuit up to the dual-line valve.

In this situation, the driver must, while holding down the crane button, release the energy accumulators and, observing the precautionary measures, remove the car from the roadway.

On the side of the road in a calm environment, the driver should find and, if possible, fix the problem.

If it was not possible to find or eliminate the malfunction, in order to ensure the possibility of moving the car or towing it, it is necessary to compress the springs in the energy accumulators using the emergency brake release circuit and unscrew the screws in them until they stop.

When returning to the ATP in a faulty car with disconnected power accumulators, the driver must remember that the parking and emergency brake systems do not work on the car.

Therefore, he must constantly monitor the condition of the working brake system, move at a reduced speed, if necessary, stop on a horizontal platform and place stops under the wheels.