Analysis of failures in the power supply system

The main causes of failures in the power supply system are:

Mechanical and electrical malfunctions occur in the power supply system during vehicle operation, which cause a malfunction of the electrical energy receivers of all other electrical systems.

Mechanical malfunctions are determined by external inspection and noise during operation.

Electrical faults are determined by the readings of control devices.

During the operation of the vehicle, the following malfunctions of the power supply system occur.

All receivers of electrical energy do not work

Failure causes: The battery is defective or completely discharged, the battery does not turn on

Violation of the normal operation of all electrical energy receivers

- while the engine is running at any crankshaft speed, the ammeter shows the discharge current.

A large fluctuation of the ammeter needle is observed when the contact rings are oiled and the generator brushes freeze, when the vibration of the car engine periodically breaks and restores contact between the brushes and rotor rings, in the connections of loosely fixed wire tips in the generator excitation circuit and in the charging current circuit.

The battery is being recharged

In the event of a short circuit on the case of the “Sh” output of the generator or the clamping of the Sh regulator, the voltage regulator will turn off.

As a result, the voltage of the generator with an increase in the frequency of rotation can reach an excessively high value, osafe for lamps and other receivers of electrical energy.

The power supply systems of vehicles with alternators and non-contact transistor voltage regulators (which is the considered system of KamAZ vehicles) are highly reliable in operation, subject to strict observance of the rules for their operation.

In particular, it is necessary to control the condition and fastening of the wires on the terminals of the generator, voltage regulator and battery.

The failure of the power transistor of the voltage regulator leads to the closure of its conclusions “-+-” and “Sh”.

Reverse polarity battery connection is a particular hazard to an AC generator set. This leads to the failure of the diodes of the rectifier unit.

Most of the known and currently used methods for constructing optimal diagnostic programs are based, as a rule, on taking into account statistical data on the reliability of system elements and the complexity of checks.

To implement these methods, it is necessary to have reliable data on the probabilities of failures of system elements and on the average time spent during implementation

various checks. To obtain such data, the laboriousness of checking each element of the system is preliminarily timed.

When timing, it should be taken into account that the preparation for the test sometimes takes longer than the test itself.

This is due to the fact that access to individual devices of the power supply system on a KamAZ vehicle is difficult.

Therefore, when timing checks, it is necessary to take into account the time to prepare for the check; timekeeping of the laboriousness of checking the following elements of the system is carried out:

Start the engine, set the average speed of the crankshaft, turn on the headlights, use the ammeter to draw a conclusion about the state (faulty or good) of the power supply system.

If the ammeter shows a discharge current, it means that the generator set is faulty. The time to complete the check is about 1 minute;

Unscrew the switch mounting nut, unscrew the two left screws of the lower trim panel that blocks access to the switch terminals, and remove the instrument and starter switch.

Then connect one clamp of the control lamp to ground, and the second to the “VK” terminal of the switch. The key is in the first position when checking. If the lamp is off, this means that the outcome of the test P1 is negative. Check time 2...5 min;

Raise the front trim panel of the cab, connect the control lamp to the “+” terminal of the regulator, and with the second clamp to the “mass” of the car. The key must be in the first position. Check time 2...5 min; 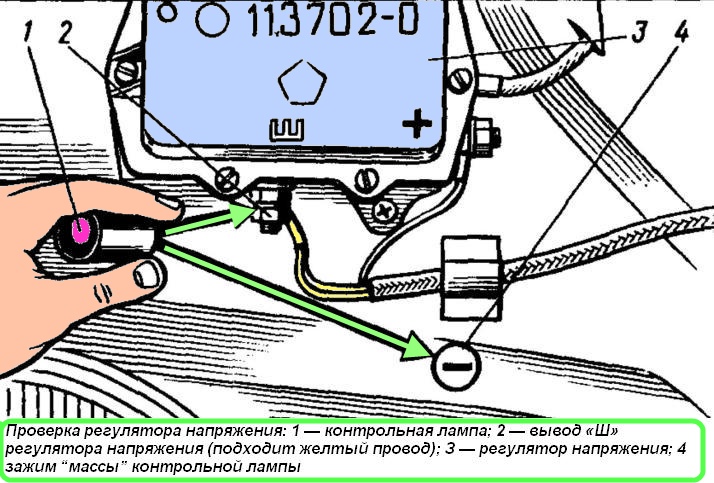 Raise the front facing panel of the cabin, connect the control light to the “Sh” terminal of the regulator, and with the second clamp to the “mass” (Fig. 17) of the car. 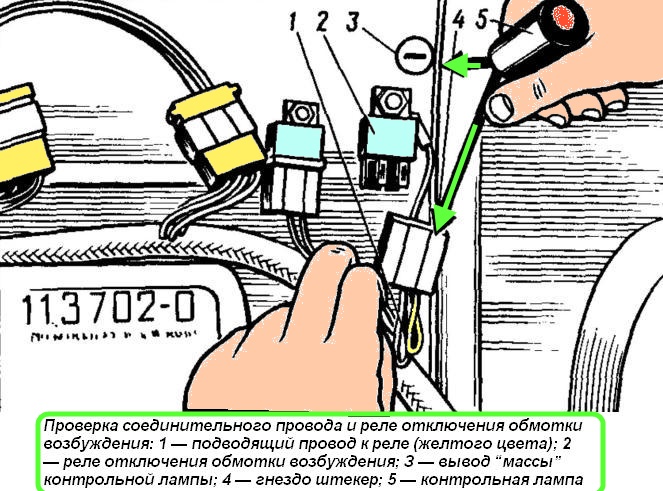 П4 - checking the connecting wire between the “Ш” terminal of the voltage regulator and the excitation winding disconnect relay (Fig. 18)

Turn on the ground, put the key in the first position and raise the front trim panel of the cab, then connect one terminal of the control lamp to the ground, and the second to the inlet socket of the connector plug (yellow wire goes to it). Check time 2...5 min; 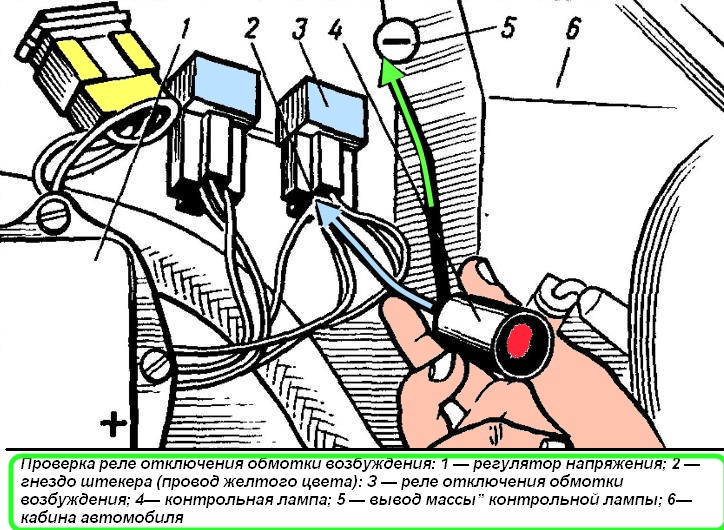 Turn on the “ground”, put the key in the first position, raise the front facing panel of the cabsy, connect the test lamp to the “ground” and to the output “2V” of the relay fig. 19, middle terminal, yellow wire goes out).

P6 - checking the wire from the relay to the generator

Raise the cab, connect a test lamp to the “ground” and to the “Ш” terminal of the generator (the yellow wire is suitable, Fig. 20).

For convenience, the plug with the “Sh” pin can be removed from the generator socket.

During the test, the ground is on, the key is in the first position; 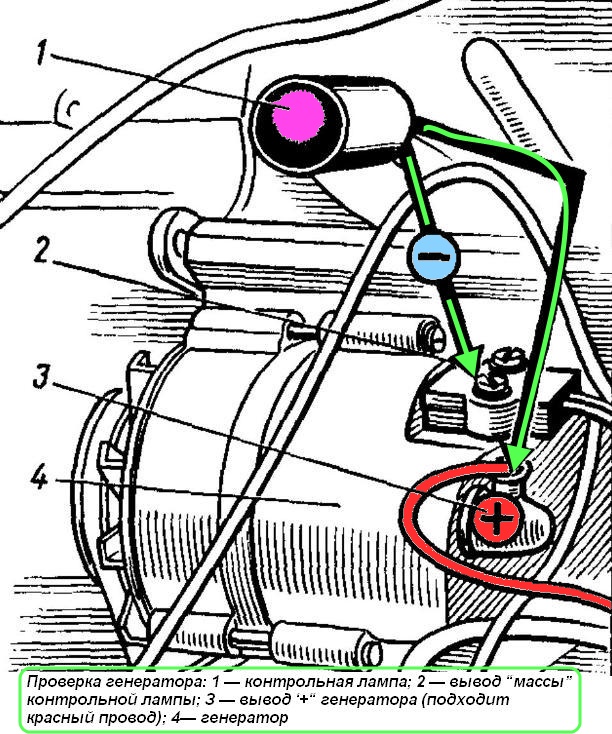 Raise the cab, connect the control lamp to the “ground” and to the “+” terminal of the generator (the red wire leaves, Fig. 5). During the test, the engine must be running at medium speed. Check time 3...5 min;

Start the engine, set the average frequency, connect the test lamp to the "ground" and to the "1A" fuse (red wire is suitable). Check time 1.. .2 min;

Start the engine, set the average speed of the crankshaft, then open the middle instrument panel and connect the control lamp to the “ground” and to the “1 G” terminal of the fuse (the red wire leaves). Test time 1 ...2 min.

If the control lamp is on when checking P1, then the X1 element is working and, accordingly, all the elements preceding it are working.

If the control lamp is off, then the fault is in one of the elements up to X1 + 1.

When timing checks, it was found that the time for one check differs slightly from the time for any other check.

Therefore, a reasonable troubleshooting method would be the midpoint method, according to which, at each check, the group of untested elements is divided into two subgroups containing approximately the same number of elements.

P5 is checked first. If the outcome of this check is negative, then the fault must be sought among the elements X1..X5. we divide these elements into two more subgroups, performing the P3 check.

If the outcome of the P3 test is positive, then, after performing the P4 test, the faulty element of the system is determined.

If the outcome of the test P4 is negative, then the fourth element is faulty - the wire from the voltage regulator to the excitation winding disconnect relay.

If the outcome of the P4 test is positive, the fifth element, the relay, is faulty.

In case of a negative outcome of the P2 test, you should perform the P1 test.

If the result of the P1 check is negative, then the first element is faulty - the instrument and starter switch.

The positive outcome of the P1 test indicates a malfunction of the second element - the wires from the switch to the voltage regulator.

If the first check of P5 gave a positive result, the incorrigibility should be sought among the elements X6...X10.

Then, check P8 should be performed, the positive outcome of which indicates that the fault should be sought among the elements X9 and X10.

If the second check P8 gave a negative result, check P6 should be performed.

A negative result of this check indicates a malfunction of element X6.

Thus, we obtain a troubleshooting algorithm in the power supply system, thanks to which, in order to find a faulty element of the system, it is enough to perform four checks instead of ten possible ones.