The rest of the parts are lubricated with splashed oil. 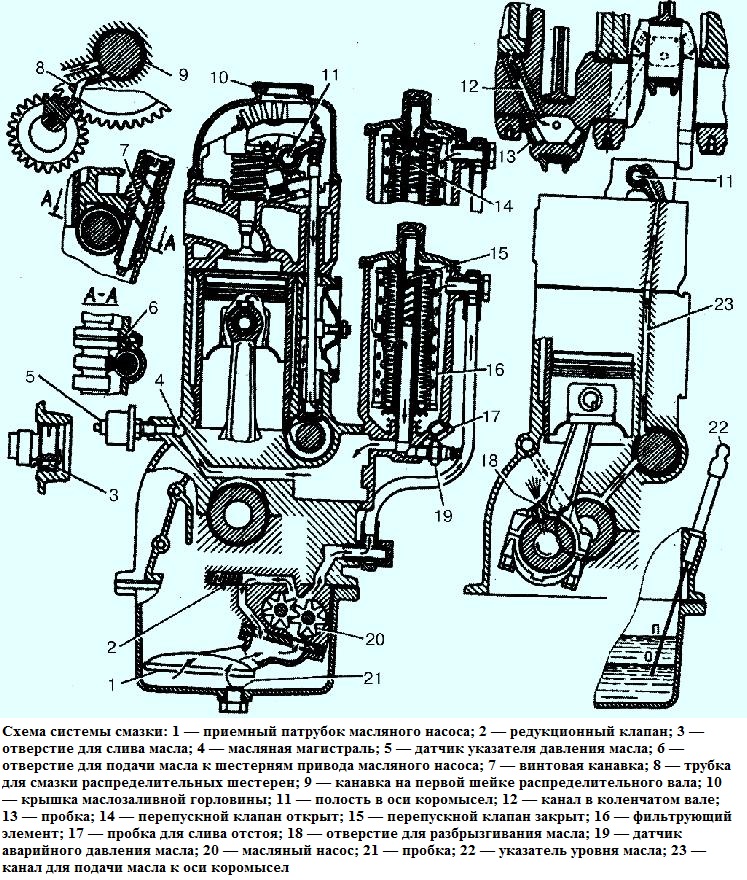 The lubrication system includes an oil pump 20 with a suction pipe and a pressure reducing valve (installed inside the oil sump), oil channels, an oil filter with a bypass valve, an oil sump, an oil level indicator, an oil filler cap, an oil pressure indicator sensor, an alarm sensor emergency oil pressure.

The oil taken by the pump from the oil sump flows through the oil receiver through the channels in the pump housing and the outer tube into the oil filter housing.

Further, after passing through the filter element 16, the oil enters the cavity of the second partition of the cylinder block, from where along the drilled channel into the oil line - the longitudinal oil channel 4.

From the longitudinal channel, oil is supplied through inclined channels in the baffles of the block to the main bearings of the crankshaft and camshaft bearings.

Oil flowing from the fifth camshaft bearing into the block cavity between the shaft and the plug is discharged into the crankcase through a transverse hole in the shaft neck.

The crankpins are supplied with oil through channels 12 from the main journals of the crankshaft.

Oil is supplied to the gears of the camshaft drive through a tube 8, pressed into the hole in the front end of the block, connected to the annular groove 9 on the first camshaft journal.

A jet of oil is ejected from the outlet of the tube, which has a small diameter, directed at the gear teeth.

Through a transverse channel in the first camshaft journal, oil from the same journal groove also enters the camshaft thrust flange.

The oil pump drive gears are lubricated by a jet of oil ejected from channel 6 in the block connected to the fourth camshaft journal, which also has an annular groove.

The walls of the cylinders are lubricated by oil splashes from the jet ejected from hole 18 in the lower connecting rod head when this hole coincides with the channel in the crankshaft journal, as well as by oil flowing from under the crankshaft bearings.

All other parts (valve - its stem and end, oil pump drive shaft and ignition distribution sensor, camshaft cams) are lubricated with oil flowing from the gaps in the bearings and sprayed by moving engine parts.

The capacity of the lubrication system is 6 liters.

Oil is poured into the engine through the oil filler neck located on the cover of the rocker arms and closed with a cover with a sealing rubber gasket.

Decrease in oil pressure at an average speed below 100 kPa (1 kgf/cm2) and at a low idle speed - below 50 kPa (0.5 kgf/cm2) indicates a malfunction in the lubrication system or excessive wear on the crankshaft and camshaft bearings.

Further operation of the engine under these conditions should be stopped.

Oil pressure is determined by a gauge on the instrument panel, the gauge of which is screwed into the oil filter housing.

In addition, the system is equipped with an alarm lamp for emergency oil pressure, the sensor of which is screwed into the hole in the bottom of the filter.

The signal lamp is located on the instrument panel and glows red when the pressure in the system drops below 40-80 kPa (04-0.8 kgf / cm2).

It is impossible to operate a car with a luminous emergency oil pressure lamp.

Only a short glow of the lamp is allowed at lowth idling speed and when braking.

If the system is working, then with a slight increase in the speed of rotation, the lamp goes out.

In case of underestimation or overestimation of oil pressure from the above values, you should first check the serviceability of sensors and indicators. 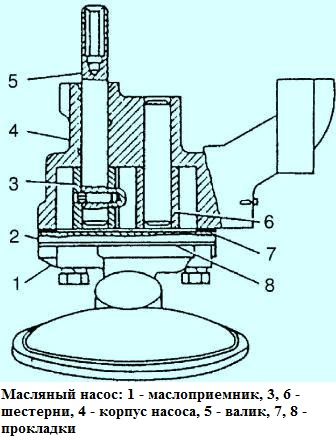 Oil pump is a gear type mounted inside the oil sump. The pump is attached with two studs to inclined platforms on the third and fourth partitions of the cylinder block.

The accuracy of the pump installation is ensured by two bushing pins pressed into the cylinder block.

Pump housing 4 is cast from aluminum alloy, gears 3 and 6 have straight teeth and are made of cermet (sintered metal powder).

Drive gear 3 is fixed on shaft 5 with a pin.

A hexagonal hole is made at the upper end of the roller, into which the oil pump drive shaft enters.

Driven gear 6 rotates freely on an axle pressed into the pump housing.

The cover 2 of the pump is made of gray cast iron and is attached to the pump with four bolts.

There is a 0.3 mm thick cardboard pad under the lid.

The oil receiver and the intake pipe 1 of the oil pump are made in a single housing made of aluminum alloy. A mesh is rolled on the receiving part of the branch pipe.

The branch pipe is attached to the oil pump with four bolts together with the oil pump cover through the paronite gasket 8.

The performance of the oil pump is much higher than required by the engine.

The performance margin is necessary to ensure the appropriate oil pressure in the system at any engine operating mode.

At the same time, excess oil flows from the discharge cavity of the pump through the pressure reducing valve back into the suction cavity.

With an increase in oil consumption through the gaps in the bearings (if the engine wears out), the required pressure is also maintained in the system, but in this case, a smaller amount of oil passes through the pressure reducing valve back into the pump intake cavity. 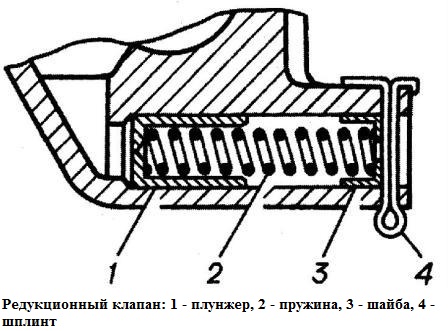 Plunger Type Pressure Reducing Valve is located in the oil pump housing. Oil pressure acts on the end of plunger 1, under the influence of which the plunger, overcoming the force of spring 2, moves.

When a certain pressure is reached, the plunger opens the drain channel opening, passing excess oil into the pump intake cavity.

The pressure reducing valve spring rests on a flat washer 3 and is fastened with a cotter pin 4, passed through the holes in the lug on the pump housing.

Reducing valve is not adjustable; the required pressure characteristic is provided by the geometric dimensions of the pump housing and the characteristic of the spring: to compress the spring to a length of 40 mm, a force in the range of 435–48.5 N (435–485 kgf) is required.

In operation, it is not allowed to change the spring force of the pressure reducing valve in any way. 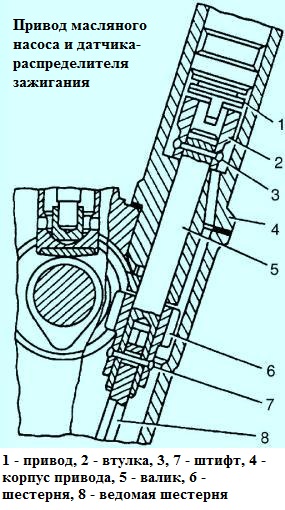 The drive of the oil pump and the ignition distribution sensor is carried out from the camshaft by a pair of helical gears.

The drive gear is steel, cast into the body of a cast-iron camshaft. The driven gear 8 is steel, heat-strengthened, fixed with a pin on the roller 5, rotating in a cast-iron housing.

The upper end of the roller is equipped with a sleeve 2, which has a slot (displaced by 1.15 mm from the axis of the roller) for driving the ignition distributor sensor.

During rotation, gear 8 is pressed against the end of the cast-iron drive housing through thrust washers 6 and 7.

This assembly, as well as the roller in the drive housing, is lubricated with oil sprayed by the drive gears and flowing down the block wall.

The oil flowing down the walls enters the slot (trap) on the lower end of the drive housing and then through the hole onto the surface of the roller.

A spiral groove is cut into the hole for the roller in the drive housing, along which the oil rises up when the roller rotates and is evenly distributed along its entire length.

Excess oil from the upper cavity of the drive housing is drained back to the crankcase through the drain hole in the housing.

Correct position of the ignition distributor sensor on the engine, it is ensured by such an installation of the drive in the block, in which at the moment the piston of the first cylinder is at TDC (compression stroke), the slot on the drive bushing is parallel to the engine axis at the maximum distance from it.

Oil cleaning filter — full-flow, with paper or cotton replaceable filter elements. All the oil pumped into the system by the pump passes through the filter.

The filter consists of a housing, a cover 1, a central rod with a bypass valve and a filter element 4.

The filter housing is made of aluminum alloy and is attached to the cylinder block through a paronite gasket with four studs.

The central rod is screwed on a tight thread into the body. The upper end of the rod is threaded for the filter cover nut.

A plug 6 is screwed into the housing from below to drain settled contaminants.

Sensor 7 of emergency oil pressure is screwed into the boss in the lower part of the housing.

The filter cover 1 is made of aluminum alloy. It is fastened with a cap nut screwed onto the threaded end of the central rod protruding from the cover.

There is a rubber seal in the groove of the cover. The cover nut is sealed with a copper gasket.

The filters central stem is hollow.

In its upper part there is a bypass valve, consisting of a textolite plate of the valve seat, a spring and a spring stop.

The rod has four rows of holes drilled for oil passage; the top row is located above the valve and above the filter element.

From the filter element, the purified oil passes through the holes inside the rod and further into the lubrication system.

When the element becomes clogged, its resistance increases, and when the pressure reaches 70-90 kPa (0.7-0.9 kgf / cm2), the bypass valve opens and begins to let oil through.

When installed in the housing, the ends of the filter element are sealed from below and above with rings 2 and 5 made of oil-resistant rubber, tightly covering the central rod.

End sealing is provided by a spring and a support washer that presses the element against the end of the lid boss.