The main defects of the cylinder head that can be repaired include: warping of the plane of contact with the cylinder block, wear of the seats and valve guides

The non-straightness of the plane of the head in contact with the block, when checking it on the control plate with a probe, should not be more than 0.05 mm.

Remove minor warping of the head (up to 0.3 mm) by scraping the plane over the paint. For warping exceeding 0.3 mm, the head must be ground.

The engine runs intermittently and does not develop full power.

If there are shells, annular workings or marks on the working chamfers of valves and seats that cannot be removed by lapping, grind the chamfers and then lap the valves to the seats. Replace valves with warped heads. 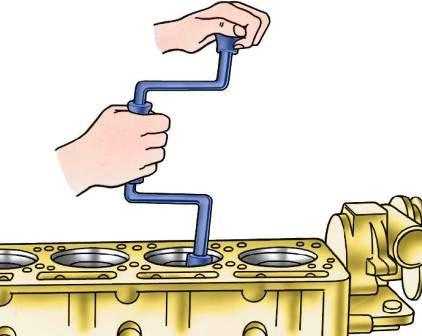 Lap the chamfers of the valves with a pneumatic or electric drill model 2213, 2447 GARO or manually using a brace.

Lapping should be done with reciprocating rotational movements, in which the valve turns in one direction a little more than in the other.

For the period of grinding under the valve, install a release spring with a slight elasticity.

The instrument is connected to the valve by a rubber suction cup, as shown in fig. 2.

For better adhesion of the suction cup to the valve, their surfaces must be dry and clean.

To speed up lapping, use a lapping paste made up of one part M20 micropowder and two parts engine oil.

Stir thoroughly before use.

Lapping until a uniform matte chamfer appears on the working surfaces of the seat and valve disc around the entire circumference.

Towards the end of lapping, reduce the amount of micropowder in the lapping paste.

End lapping with clean oil alone. Instead of lapping paste, you can use emery powder No. 00 mixed with engine oil.

For grinding the working chamfers of valves, it is recommended to use grinding machines of the R-108 or OPR-1841 GARO type.

In this case, clamp the valve stem in the centering cartridge of the headstock, which is installed at an angle of 44 ° 30 'to the working surface of the grinding stone.

A 30' reduction in the valve head face angle compared to the seat face angle speeds up running-in and improves valve tightness.

Bevel the minimum amount of metal off the valve head when grinding.

Valve stem runout - no more than 0.02 mm. Replace valves with high runout with new ones.

Do not regrind the valve stems to a smaller size, as it will be necessary to make new crackers for the valve springs. 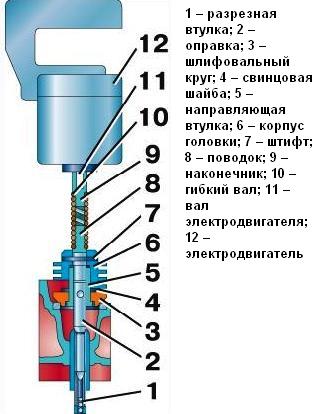 Chamfer the seats at a 45° angle, coaxial with the hole in the bushing. The chamfer width should be 1.6–2.4 mm.

It is recommended to use the tool shown in fig. 2.

Sand the saddle without lapping paste or oil until the stone has covered the entire working surface.

After roughing, change the stone to a fine stone and finish sanding the saddle.

The runout of the chamfer relative to the axis of the valve sleeve hole should not exceed 0.03 mm.

Replace worn saddles with new ones.

Replacement parts are supplied with valve seats having an outer diameter greater than the nominal diameter by 0.25 mm.

Remove worn seats from the head using a countersink.

Before pressing the seats, heat the cylinder head to 170°C and the seats chill with dry ice.

Press the fitting quickly, without allowing the saddles to heat up. The cooled head tightly covers the saddles.

To increase seat strength, caulk the outside diameter of the seats with a flat mandrel to fill the bevel of the seat.

Then sand to size and lap.

If the wear of the valve stem and guide sleeve is so great that the gap in their joint exceeds 0.25 mm, then restore the tightness of the valve only after replacing the valve and its sleeve.

Valves of nominal sizes are supplied as spare parts, and guide bushings are supplied with an inner diameter reduced by 0.3 mm for their subsequent reaming to the final size after being pressed into the cylinder head. 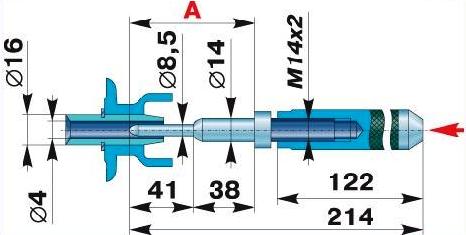 Fig. 3. Knockout of valve bushings: A - harden the indicated surface

Press worn guide bushings out of the cylinder head using a punch shown in fig. 3.

Press the new bushing from the side of the rocker arms using the same punch until it stops against the retaining ring on the bushing.

In this case, as when pressing the valve seats, heat the cylinder head to a temperature of 170 ° C, and cool the sleeve with dry ice.

After replacing the valve bushings, grind the seats (centering on the holes in the bushings) and then lap the valves against them.

After grinding the seats and lapping the valves, thoroughly wash all the channels and places where the abrasive could get into and blow with compressed air.

After finishing and washing, impregnate them with oil. To do this, insert a felt wick soaked in spindle oil into each sleeve for several hours.

Before assembling, lubricate the valve stems with a thin layer of a mixture prepared from seven parts of an oil colloidal graphite preparation and three parts of engine oil.

Possible malfunctions of valve springs that appear during operation can be: a decrease in elasticity, breaks or cracks in the coils.

Check the elasticity of the valve springs when disassembling the valve mechanism.

Replace springs with breaks, cracks and traces of corrosion with new ones.

The guide holes in the block for pushers wear out slightly, so restore the nominal clearance in this interface by replacing worn pushers.

Only nominal size tappets are supplied as spare parts.

A properly selected pusher, lubricated with liquid mineral oil, should smoothly lower under its own weight into the block socket and turn easily in it.

Replace pushers with radial scuffing, wear or chipping of the working surface at the ends of the plates.

Fig. 4. Procedure for tightening the nuts of the cylinder head

Tighten the cylinder head nuts after running the car, after 1000 km of run and after each removal of the head.

Tighten the nuts only on a cold engine in the sequence shown in fig. 4 in two steps.

On a serviceable, unworn engine, when using high-quality fuel and oil and observing the proper thermal conditions, carbon deposits are small.

When the engine is worn, especially its piston rings, a lot of oil enters the combustion chambers and a large layer of soot is formed.

The presence of soot is determined by increased detonation, overheating, a drop in power and an increase in fuel consumption.

When these signs appear, remove the cylinder head and remove carbon deposits with metal scrapers and brushes.

Do not allow carbon deposits to enter the gap between the piston heads and cylinders.

If the engine was running on leaded gasoline, pre-moisten the carbon with kerosene to prevent the possibility of inhaling toxic dust during cleaning.