Repair of the vacuum booster UAZ-3151

When the amplifier fails, only the force from the driver's foot is transmitted to the pistons of the main cylinder through the pusher 33 (see Fig. 1), the control valve, the buffer 20 and the rod 7

Increased amount of effort on the pedal indicates the need for inspection and possibly repair of the amplifier.

If the seals, springs and other parts fail, remove the booster from the car, first disconnecting the main brake cylinder, hose, pedal from it and disassemble it.

Prior to disassembly, mark the body and lid so that they can be reassembled in their original positions. 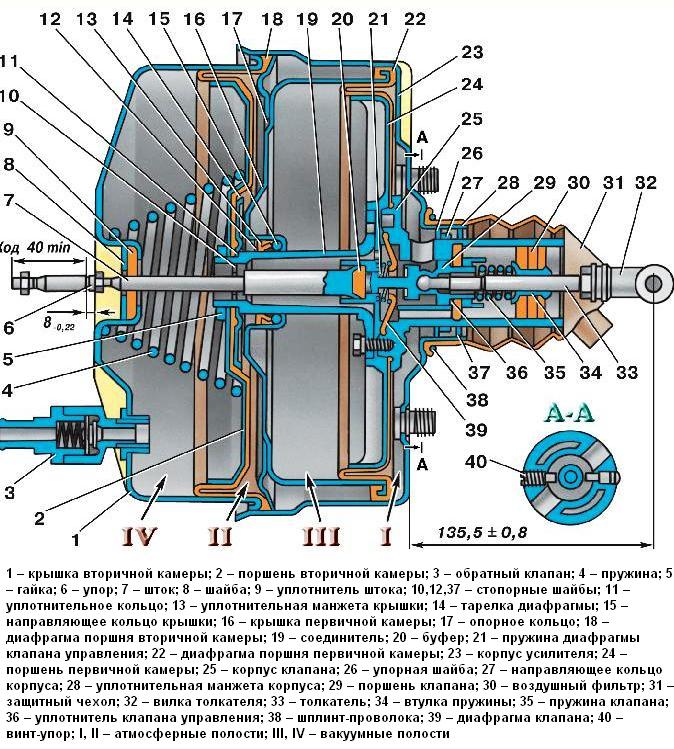 Disassemble and assemble the amplifier in a special tool using a small press.

Install the amplifier with four bolts, with rubber bushings put on them to protect the threads from damage in the holes of the fixed plate.

On the two bolts of the cover of the secondary chamber, having also previously protected their threads, install a special lever with holes for these bolts and, pressing on it with a slight pressure of the press, turn the cover until the protrusions on the amplifier case align with the depressions on the cover.

Other operations do not require special tools.

When assembling, lubricate the friction surfaces of parts 6,17, 24, 25 and the contact surfaces of cover 1 with diaphragm 18 with TsIATIM-221 grease.

After assembling the amplifier, check for operability and tightness.

To do this, connect the hose to the check valve and, with the engine running, apply a force of 196–294 N (20–30 kgf) to the pusher 33. In this case, the control valve body, together with the pusher, must move until it stops.

After removing the force from the pusher 33, the control valve body should return to its original position.

After 2-3 minutes after the engine stops, when pusher 33 is pressed, a hiss of air entering the amplifier through the control valve should be heard.