To remove the clutch discs, follow steps 1 to 5 of the section "Replacing the release bearing UAZ-3151»

Next, remove the six bolts securing the shroud. Loosen the bolts gradually and sequentially around the circumference, no more than two turns of the wrench at a time, so as not to bend the pressure plate housing supports. 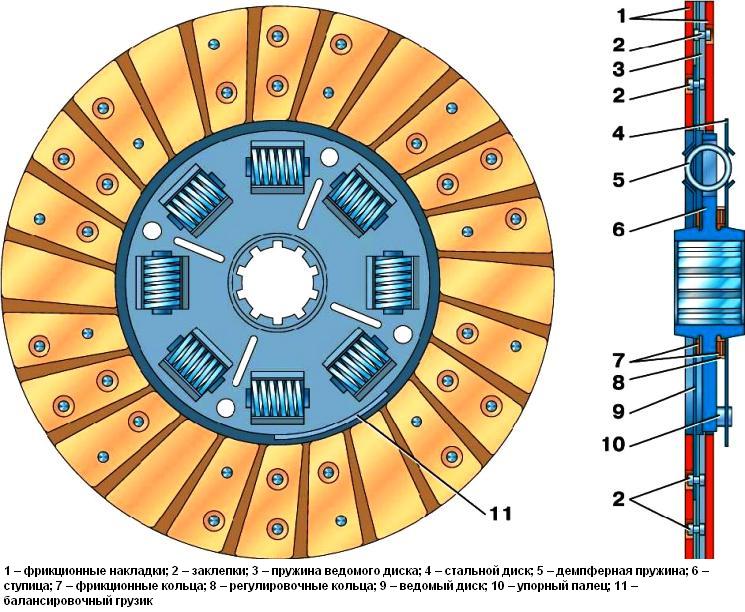 After removing the bolts, the pressure and driven discs (Fig. 4) can be freely removed downwards.

Install discs on the car in reverse order.

Before installing, do the following:

Instead of a mandrel, you can use the input shaft of the gearbox.

The short end of the driven disc hub must face the flywheel. 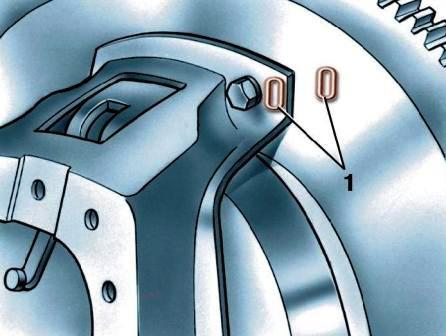 Tighten the bolts evenly and consistently around the circumference. 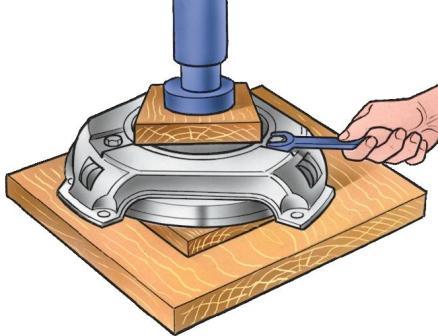 The parts of the pressure plate are under the action of six springs. Therefore, before unscrewing the bolts for fastening the retractable lever supports, they should be unloaded by compressing the disc with a press, as shown in Fig. 6.

Disassemble the pressure plate in the following order:

Also make marks on the levers and pressure plate.

Assemble the pressure plate as follows:

1. Lay 19 rollers in the holes of the retractable levers. For ease of assembly, so that the rollers do not fall out, lubricate them with Litol-24 grease.

Do not use grease for this purpose.

In the absence of lubrication, the rollers can be assembled using a cylindrical mandrel with a diameter of 8 mm and a length of 9 mm, around which dry rollers are placed in the holes.

After installing the rollers, lubricate them with 2-3 drops of gear oil. 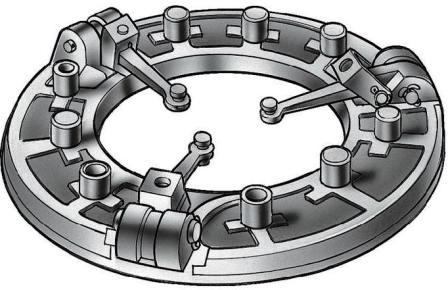 Splint the fingers of the forks.

4. Assemble the disc with the casing and springs under pressure to compress the springs and screw the bolts into the support forks.

Place the driven disc (or a template that replaces it, 9.5 mm thick) under the press.

On the driven disk, put the pressure, assembled with levers; install heat-insulating washers and springs on the protrusions for the pressure springs.

5. Install the clutch cover on the pressure plate so that the marks made during disassembly match.

Make sure that each spring hits the corresponding tab in the casing.

Press the cover against the table until it stops, as shown in fig. 5. There should be no distortion of the casing.

6. Adjust the position of the heads of the adjusting bolts of the release levers.

Replacing the friction linings of the driven disc

Replace the friction linings of the driven disk if cracks have formed in the linings or holes for rivets have developed, and also if the linings are worn so that less than 0.5 mm remains from the friction surface to the heads of the rivets.

As a general rule, if one pad is replaced, the other should also be replaced.

To replace the pads, carefully drill out the rivets that secure them (rivet shaft diameter 4 mm) and remove the remnants of the rivets so as not to damage the disc spring plates.

After replacing the pads, check the runout of the friction surfaces of the new pads relative to the spline.

The runout measured at a radius of 125 mm should not exceed 0.7 mm.

If it exceeds the specified value, then the slave disk must be edited.