Maintenance of the K-126 carburetor

The K-126GU carburetor is used to complete the 4178 engines, as an option instead of the K-151V carburetor 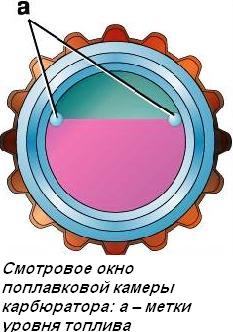 Check the fuel level when the engine of the car is installed on a horizontal platform.

When pumping fuel using a manual drive of the pump, the fuel level in the carburetor float chamber should be set within the limits marked with marks (tides) "a" (Fig. 2) on the walls of the viewing window.

If the level deviates from the specified limits, adjust by removing the cover of the float chamber.

After adjusting, check the fuel level again and re-adjust if necessary.

Given that during operation, due to wear of the float mechanism, the fuel level gradually rises, set it when adjusting to the lower limit.

In this case, the fuel level will remain within acceptable limits for a longer time.

When adjusting the fuel level in the carburetor float chamber, do not bend the float tongue by pressing the float, but bend it with a screwdriver or pliers.

Adjust the low speed of the crankshaft in idling mode on a warm engine with a good ignition system.

Adjust in the following order: 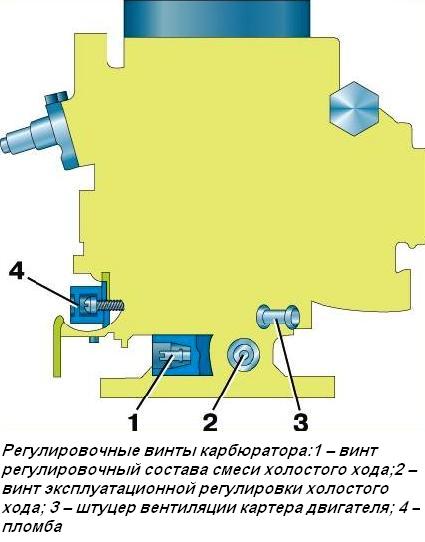 2. Set screw 1 to the position that provides the highest engine speed at a given throttle position.

Screw 1, in addition, regulate the CO content in the exhaust gases. 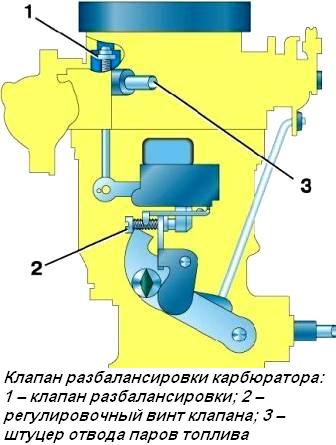 4. Adjust the valve drive 1 (fig. 5) of the float chamber unbalance with screw 3.

The valve should be open when the throttle is fully released. 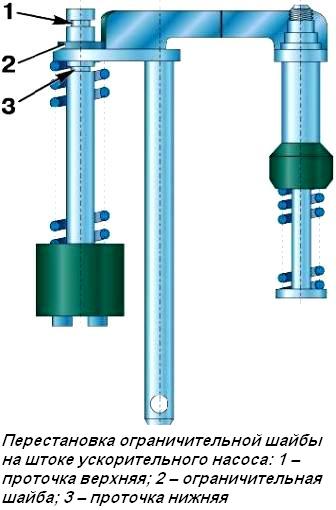 Check the operation of the accelerator pump if, when you sharply press the throttle pedal, dips are observed in the engine operation, and the engine slowly increases the speed.

To check, open the throttle sharply, while fuel should flow from the accelerator pump nozzle.

On a special stand, you can check the flow of the accelerator pump, which must be at least 8 cm 3 for 10 piston strokes.

During the operation of the carburetor, due to wear of the piston and walls of the well of the accelerator pump, its supply may be insufficient.

To increase the flow, move the restrictive washer 2 (Fig. 6) on the accelerator pump rod to the lower groove 3.

When operating the car in high-temperature conditions, reduce the flow of the accelerator pump by moving the restrictive washer to the upper groove 1 of the rod. 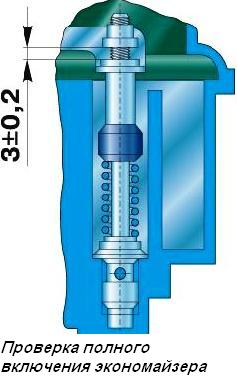 If the engine does not develop maximum power at wide open throttle, check that the economizer is fully engaged.

To do this, check the gap between the plate and the nut of the economizer drive rod at full throttle, which should be (3 ± 0.2) mm (Fig. 7).

If necessary, adjust this clearance with a nut, and then secure the nut by crimping it over a small diameter.

In principle, the K-126GU carburetor is similar to the K-151V carburetor, but has a simpler design (there is no autonomous idle system, an EPHX system and a float chamber ventilation valve).

The minimum idle speed is adjusted in the following sequence:

- tighten the screw that changes the composition of the mixture until it stops, but not tight, and then unscrew it 1.5 turns;

The carbon monoxide limit setting is set with the toxicity limiter screw.