The clutch of cars is dry, single-disk, with a damper device, installed in a cast aluminum crankcase (Fig. 1) 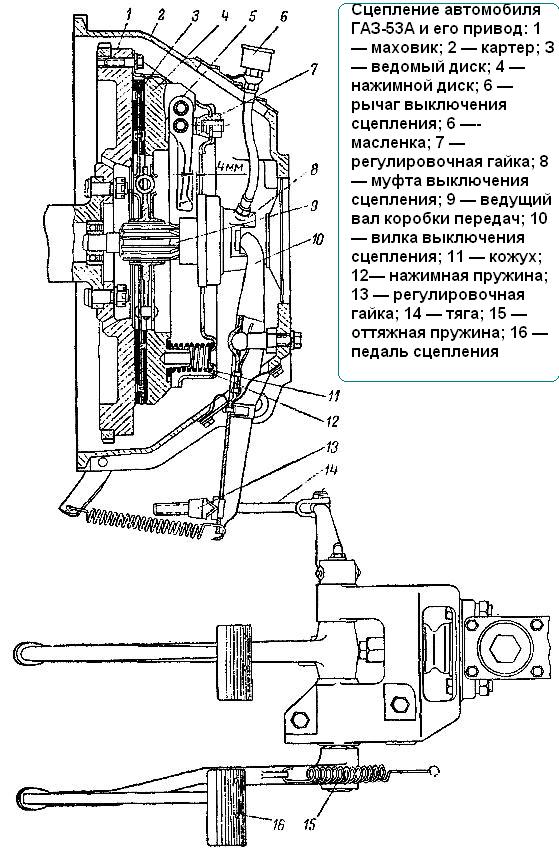 Pressure and driven disks, as well as clutch release clutches for GAZ-53A and GAZ-66 cars have no differences. 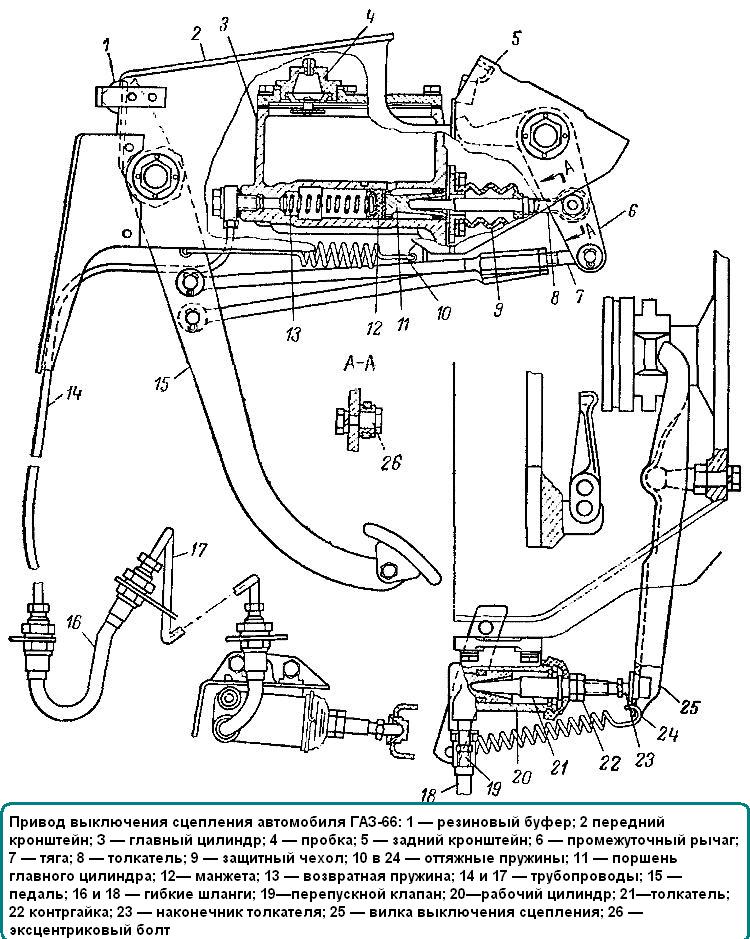 The drive for disengaging the clutch of the GAZ-53A car is mechanical (see Fig. 1), the GAZ-66 car (race 2) is hydraulic.

When lubricating the thrust bearing of the clutch release clutch, it is necessary to squeeze out the lubricant in the amount of one full filling of the cap oiler.

More frequent and heavy lubrication may cause excess lubricant to get on the clutch discs, which may cause failure. 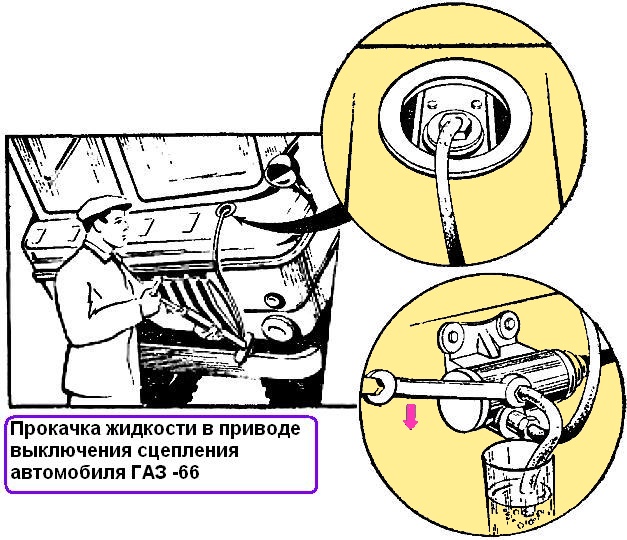 Special attention should be paid to caring for the GAZ-66 clutch release drive in connection with the use of GTZh-22 fluid as a working fluid, since it has strong oxidizing properties.

For the normal operation of the clutch of the GAZ-53A car, it is necessary to ensure a gap between the heads of the clutch release levers and the thrust bearing of 4 mm.

To obtain this clearance, it is necessary to periodically check and adjust the free play of the clutch pedal, which should be 35-45 mm.

The free travel of the clutch pedal is regulated by changing the length of the rod connecting the clutch release fork to the lever on the pedal shaft.

An increase in free play is achieved by unscrewing the nut on the rod, a decrease - by wrapping it.

For the normal operation of the clutch of the GAZ-66 car, it is necessary to ensure a gap between the heads of the release levers and the thrust bearing of 2 mm and a gap between the pusher and the master cylinder piston of 0.5-1.5 mm.

When adjusting the clutch release drive, first adjust the gap between the pusher and the master cylinder piston with an eccentric bolt 26 (see Fig. 2).

Normal clearance corresponds to a pedal free play of 3.5 - 10 mm.

After adjusting, tighten the nut of bolt 26.

If with the help of an eccentric bolt it is not possible to provide the required free play of the pedal, then it is preliminarily regulated by changing the length of the rod 7.

After adjustment, the total pedal travel should be 30-37 mm.

For normal operation of the clutch, it is also necessary to ensure that the piston stroke of the working cylinder is at least 23 mm.

With a smaller stroke, the clutch may not fully disengage. The piston stroke of the working cylinder is not regulated.

To do this, after removing the rubber protective cap from the head of the bypass valve of the working cylinder, put a bleed hose on the head.

Dip the end of the hose into a glass vessel, into which a little liquid is poured, and unscrew the valves by - ¾ turn.

Having screwed the tire pump hose to the threaded tip of the master cylinder plug, create a slight pressure in the system with the pump (Fig. 3).

This forces fluid from the master cylinder reservoir to fill the hydraulic drive system, forcing air out through the slave cylinder bypass valve.

The air from the hose will pass through the liquid in the glass vessel in the form of bubbles.

After the air stops flowing from the hydraulic drive system (bubbles stop coming out of the bleed hose), close the valve, remove the bleed hose.

Put a protective cap on the bypass valve head and, unscrewing the master cylinder plug, add liquid to a level of 15-20 mm below the upper edge of the filler hole; wrap the cork.

When pumping, the bottom of the master cylinder must not be exposed.

Therefore, if about a glass of liquid has leaked out of the system, stop pumping and continue it only after adding liquid to the main cylinder.

Clutch problems and how to fix them

- Oiling the friction linings of the driven disk

If the oiling is small, then you can sand the lining with fine sandpaper, after washing them with gasoline

Adjust the relative position of the lever heads using nuts 7 (see Fig. 1) of the support forks

- Presence of air in the hydraulic drive system

Bleed fluid in the system

- deformation of the driven disk

Adjust the relative position of the levers

- Wear of the inner cuff of the master cylinder

- Weakening of the clutch pressure springs

- Excessive wear of the friction linings, friction surface of the flywheel or pressure plate

Replace the driven discs or disc linings, and repair the flywheel and pressure plate by grinding the friction surfaces

- Lack of lubrication in the clutch release bearing

The main parts of the clutch that require replacement or repair during operation are the driven and pressure plates, as well as the clutch release bearing. 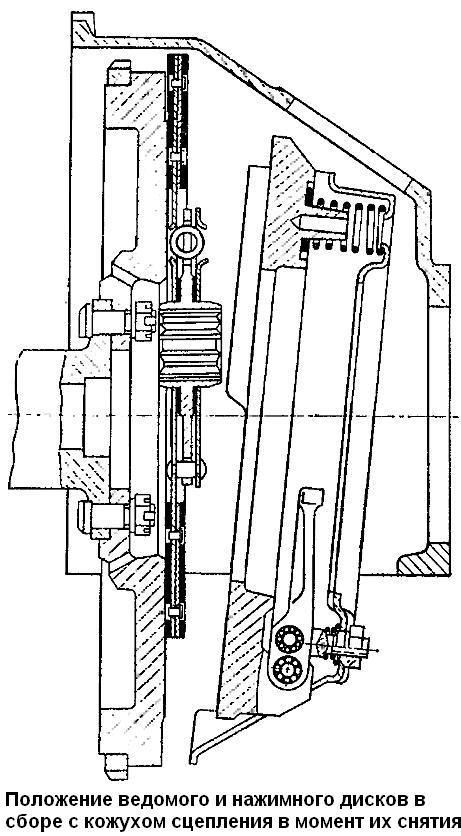 Before pressing a new bearing onto the coupling, check that it is filled with grease.

When installing a gearbox with a clutch on a car, make sure that the lubricant supply hose to the bearing is not damaged, to do this, fill it inside the clutch housing before final installation of the gearbox on the clutch housing studs.

If the hose for supplying grease to the bearing was removed or replaced for any reason, then fill it with grease when installing.

To do this, squeeze the contents of a fully filled cap oiler into it twice; only the third time the oiler will supply grease to the clutch release bearing.

In this case, all the bolts should be unscrewed gradually so as not to bend the casing support legs or break the bolts that are unscrewed last.

Clutch discs separated from the flywheel are removed from the crankcase in a certain position.

First, the pressure plate is removed by turning it down with one of the paws of the casing and lifting the driven disc (Fig. 4), then the driven one.

Disassembly and assembly of the clutch pressure plate

The pressure plate is disassembled in the following order: 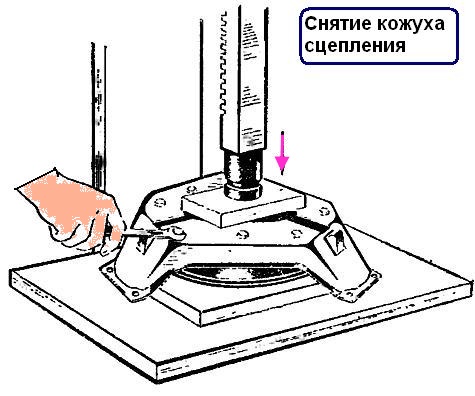 If warpage, scoring, annular grooves or cracks caused by overheating are found on the friction surface of the pressure plate, the disc is replaced or repaired by turning and grinding; the thickness of the repaired disc should be less than the thickness of the new disc by no more than 1.5 mm.

The difference in size from each of the axes of the three holes under the axis of the clutch release levers to the machined surface should be no more than 0.15 mm, and the surface itself should be flat (when checking on the plate, the 0.05 mm probe should not pass through).

Broken or loose pressure springs must be replaced (preferably all springs should be replaced).

The springs of the support forks of the clutch release levers that have lost their elasticity must also be replaced, because otherwise, at high engine speeds, the heads of the release levers can move back, and this will cause continuous operation of the thrust bearing and premature wear.

The pressure plate with the casing and levers is assembled in the following order:

After assembly, adjust the position of the heads of the clutch release levers.

In the absence of a fixture, this operation can be carried out using a free flywheel.

To do this, the pressure plate, assembled with the casing, is placed on the friction surface of the flywheel.

Between the pressure plate and the flywheel, washers 10.2 mm thick are placed in three places and the bolts securing the casing to the flywheel are wrapped.

- after that, the adjusting nuts are punched. Instead of washers when adjusting, you can use a new driven disk.

In case of high wear (almost to the rivets) or damage to the friction linings of the driven disk, the linings are replaced.

Both pads must be replaced at the same time, as the difference in the thickness of the pads will disrupt the normal operation of the clutch.

To remove worn or damaged linings, drill and carefully tap out the rivets securing the linings to the leaf springs and disc.

Rivet new linings so that the rivet sinking depth is at least 1.5 mm.

The runout of a disc with new linings should be no more than 0.7 mm when measured at a radius of 125 mm from the center of the disc. 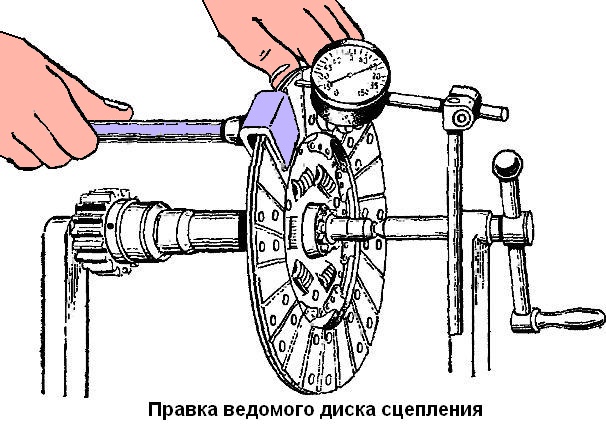 If the disc runout is greater than the allowable value, then when disengaged, the clutch will “lead” (incomplete disengagement of the clutch).

If necessary, the driven disk is corrected using the mandrel shown in fig. 7.

Installing clutch discs. Repaired clutch discs are installed on the car in the following order:

After disassembling the master and slave cylinders, inspect their parts, as well as the parts of the pedal bracket.

Nominal dimensions and limit dimensions to which wear of parts without repair is permissible are indicated in Table. 5.

If scuffs or scratches are found on the mirror of the main or working cylinder, the cylinder should be replaced or it should be ground and honed to one of the repair sizes recommended in Table. 6 and 7.

When assembling, it is allowed to install internal sealing collars of nominal size in the main cylinder of the first repair size.

Outer sealing collars of the nominal size can be installed for the first and second repair sizes.

In the working cylinder of the first repair size, it is allowed to install a sealing cuff of nominal size.

The spherical tips of the pushers of the main and working cylinders, as well as the spherical recesses in the pistons of the cylinders and in the thrust pin of the clutch fork must be smooth, without scratches.

The tips of the pushers must mate with the notch mi pistons on a spot in the center of the spheres. If the contact occurs along the ring, then the pairing is incorrect and can cause sticking of the pusher, misalignment and wear of the piston.

When cleaning the sphere on the pushers with an emery cloth, it is necessary to ensure that the touch is not on the ring, but on the spot.

Inspect the ends of all plastic bushings and washers of the pedal bracket, carefully clean the burrs on their ends.

Check if the release and return springs are weakened.

If the springs are weak, replace them.