The ZMZ-406 engine is equipped with a microprocessor-based ignition system, which consists of a control unit for fuel injection and ignition systems, two ignition coils of types 30.3705 or 301.3705, spark plugs, high-voltage and low-voltage wires

The control unit is installed in the passenger compartment on the right side under the instrument panel, behind the upholstery of the sidewall of the body.

The ignition coils are mounted on the cylinder head cover.

The control unit receives signals from sensors installed on the engine and, based on this, corrects the ignition timing, which allows obtaining optimal power, economic and toxicity indicators.

The system consists of an electronic control unit, a set of sensors, actuators and connecting wires with connectors.

An electronic control unit is a specialized computer that receives signals from sensors and controls the executive elements of the system. 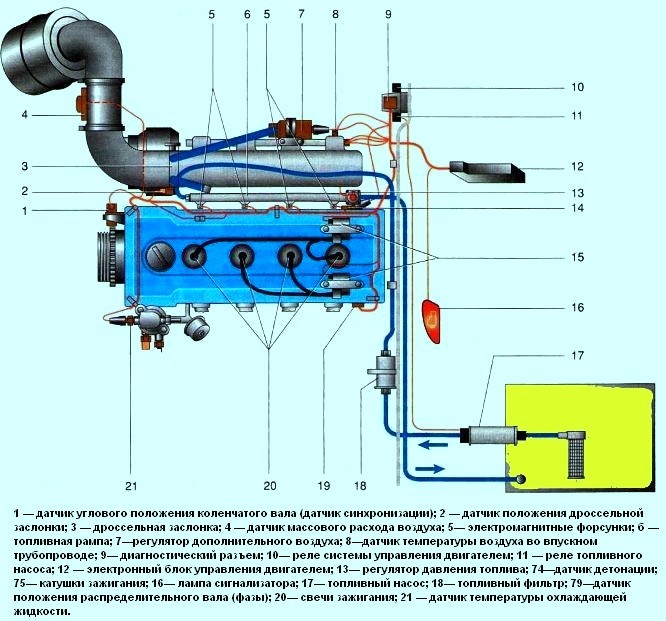 The microprocessor of the control unit, according to the program entered into the memory of the unit, and based on the data received from the sensors, calculates the necessary signal parameters for the actuators.

The matching elements of the control unit transmit these signals to the actuators of the system.

In the event of a failure of the throttle position sensor, mass air flow sensor or knock sensor, the system switches to a backup mode that allows you to get to the place of repair.

The system informs the driver about the transition to the standby mode by turning on the KMSUD indicator lamp on the instrument panel.

Operating the engine in this mode does not adversely affect its condition, however, it becomes difficult to start, throttle response deteriorates, fuel consumption and exhaust gas toxicity increase.

Information about the settings of the control system and malfunctions is stored in the memory of the unit and can be read through the diagnostic connector.

If the battery is disconnected, the fault information will be cleared. This does not affect the operation of the engine in the future, but may lead to a temporary deterioration in its performance.

The MIKAS 5.4 control unit is based on the SAB80C517A microprocessor from SIEMENS.

The software is stored in a read-only memory (ROM, ROM) with a capacity of 32 KB and random access memory (03U).

The control unit diagnoses the circuits of sensors and actuators, and also checks the health of its own circuit.

When detected malfunction, the unit turns on the signaling lamp KMSUL.

The control unit diagnostic system has several modes of operation.

When the ignition is on, the electronic control unit constantly monitors most of the incoming and outgoing signals.

About malfunctions that appear and disappear, the unit informs with a short (about 0.5 s) turning on of the indicator lamp. In this case, fault codes that appear more than once every two minutes are stored in the memory of the electronic unit.

DTCs that do not appear within two hours will be erased from memory.

A permanently lit indicator lamp informs about a malfunction that is constantly present in the system.

In this mode, the electronic unit, using a signaling lamp, displays the fault codes recorded and stored in memory.

Each fault has a two or three digit flash code. Each digit of the code corresponds to a series of short (0.5 s) flashes of the lamp. There is a pause between the series (about 1.5 s).

After all the digits of one code have been transmitted (2 or 3 series of flashes, depending on whether the code is two or three digits) there is a long (about 4 s) pause.

The code for each fault is repeated three times.

For a more complete check of the engine management system, a special tester 08T-2 is connected to the diagnostic connector.

Only specialists with the necessary equipment can carry out such work.

Error codes are erased from memory when the battery is disconnected.