The check is carried out with adjusted front wheel bearings.

1. Raise the front wheel with a jack. Rock the wheel vertically. 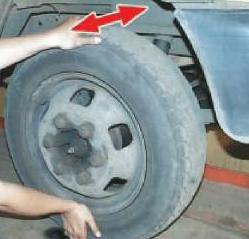 If play is felt (the upper outer edge of the brake caliper moves more than 0.5 mm - this distance can be measured, for example, using an indicator), then the kingpin and bushings are worn out and need to be replaced. 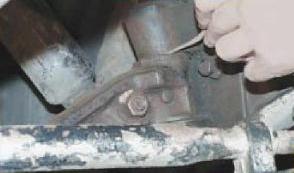 2. Put the car on the wheels and use a feeler gauge to measure the gap between the upper eye of the steering knuckle and the boss of the front suspension beam.

The maximum allowable gap is 0.15 mm. Eliminate the gap from 0.15 to 1 mm by selecting the appropriate set of shims installed between the upper eye of the steering knuckle and the boss of the front suspension beam. If the clearance is greater than 1 mm, replace the thrust bearing.

Disassembly and repair of the pivot joint

1. Jacking up the front of the car.

2. We remove the front wheels and install stops under the beam. 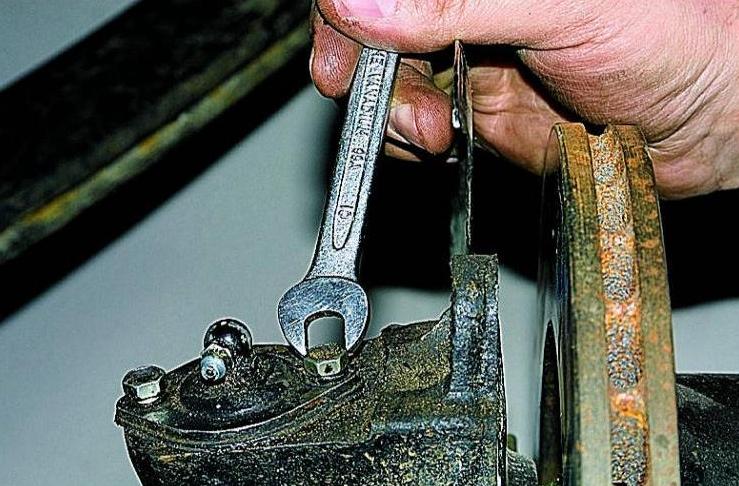 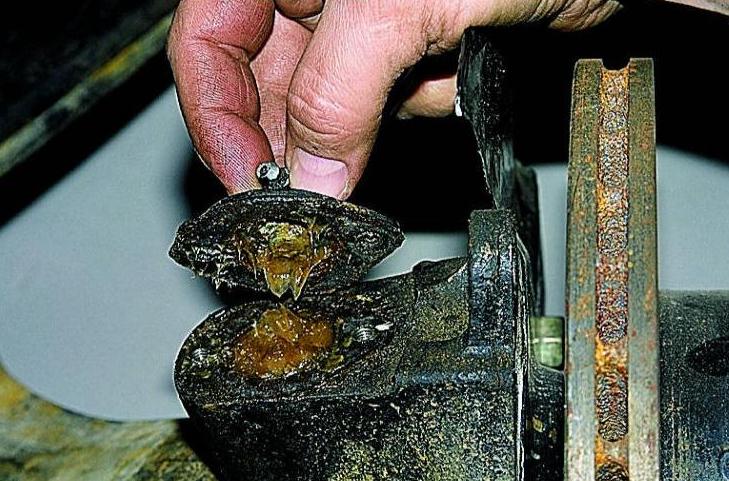 3. Using the “10” key, we unscrew the two bolts securing the upper cover of the kingpin bearing

4. Remove the cover of the upper kingpin bearing with a grease fitting. 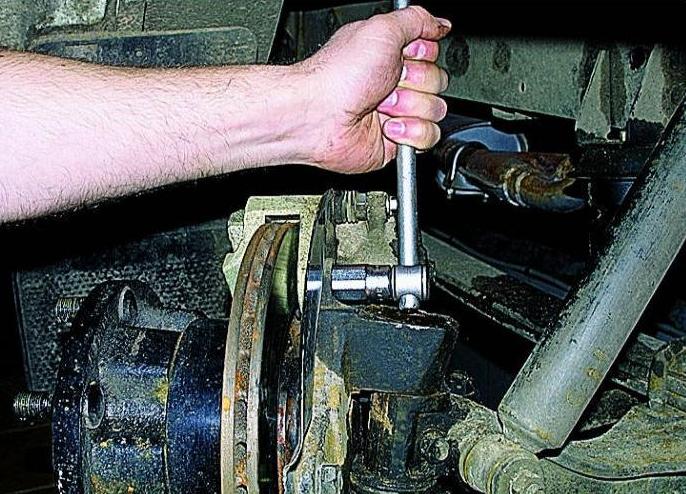 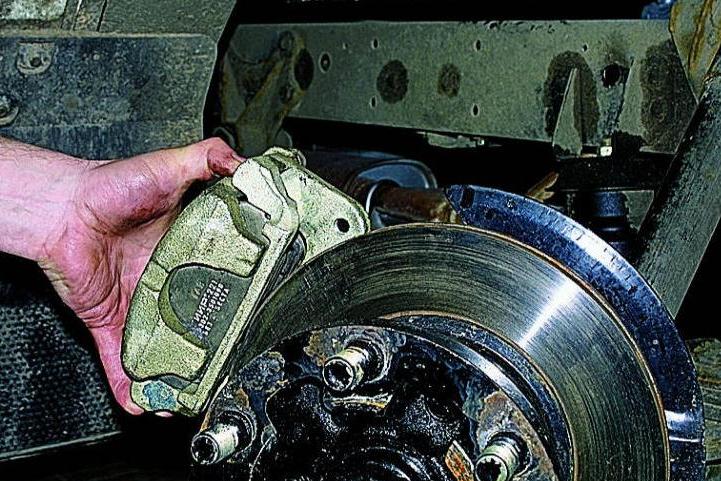 5. Using the “19” head, we unscrew the two bolts securing the brake caliper.

6. We remove the caliper and tie it with wire so that it does not interfere. 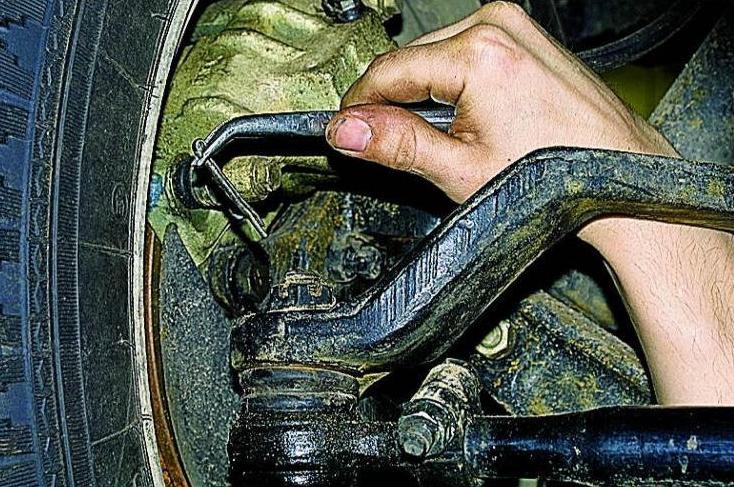 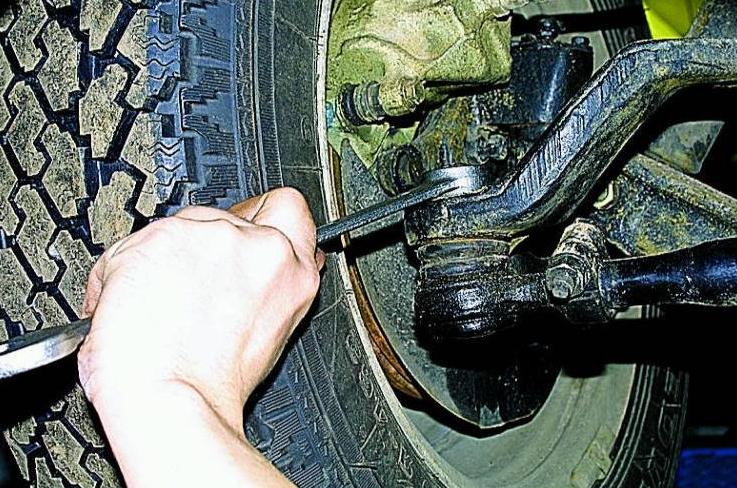 Using pliers, we unpin the nut securing the transverse link to the lever

Using the “24” wrench, unscrew the nut securing the transverse link to the lever. The nut should be left on the finger thread 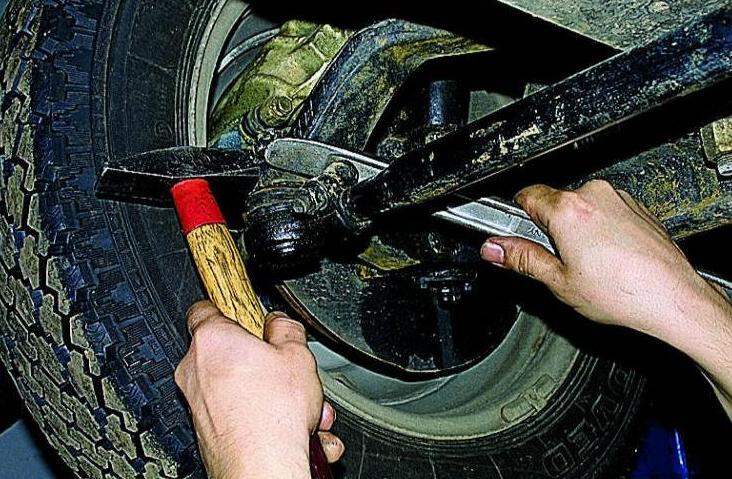 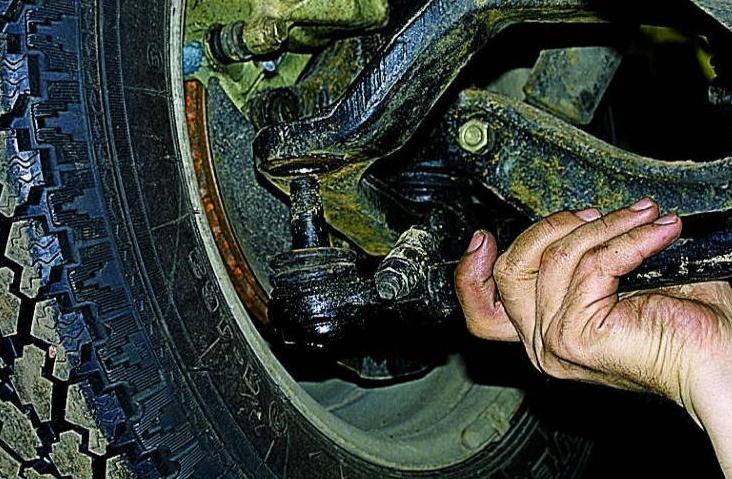 Using the swing arm as a support, we “strain” the finger, resting the mounting blade on the transverse link

11. By hitting the lever with a hammer, we press out the finger.

12. After unscrewing the nut, remove the pin from the hole of the transverse link

13. Using the “10” key, we unscrew the two mounting bolts and remove the lower cover of the kingpin bearing. 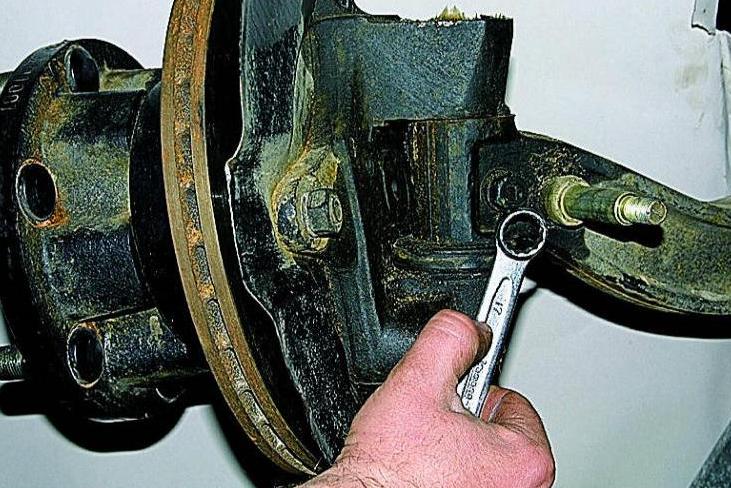 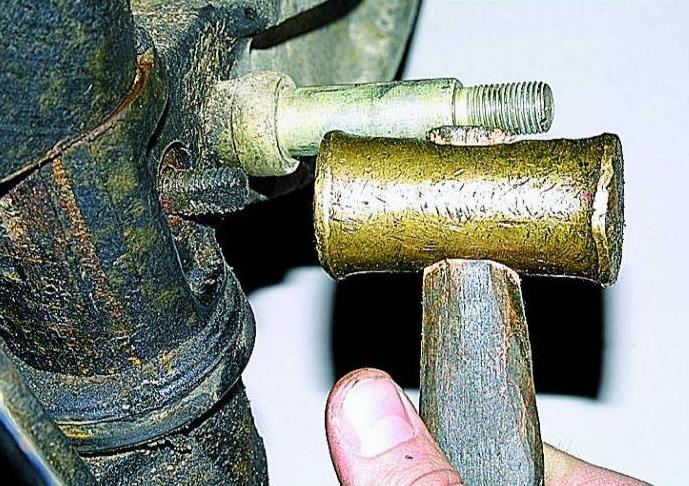 15. We knock out the stopper with a soft metal hammer. 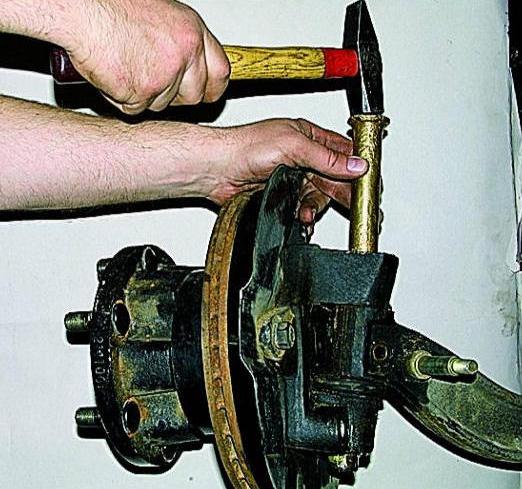 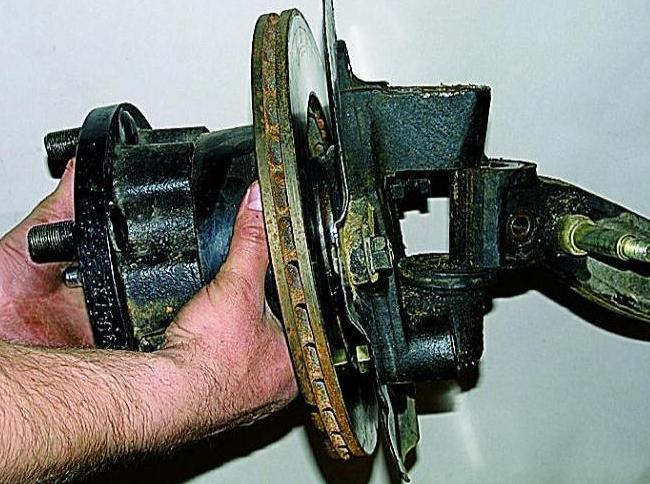 Using a soft metal mandrel, we knock out the kingpin from top to bottom. 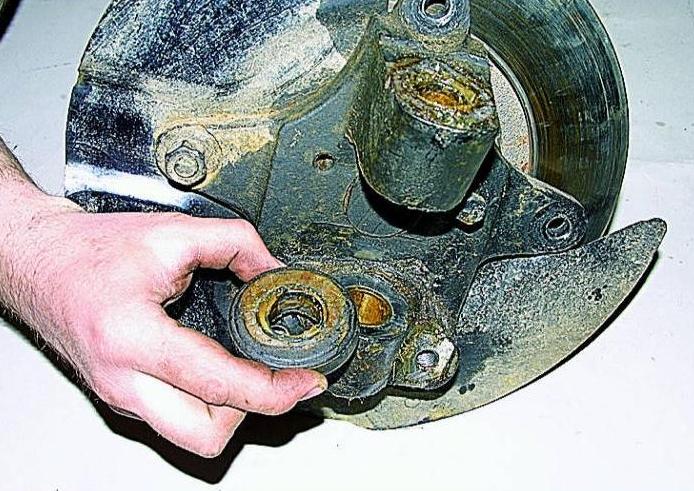 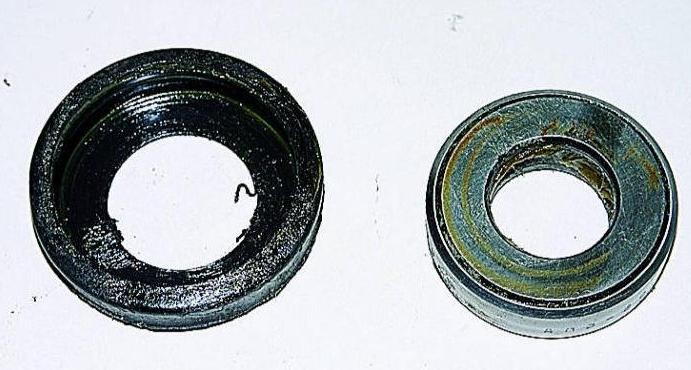 Remove the protective cap from the thrust bearing. 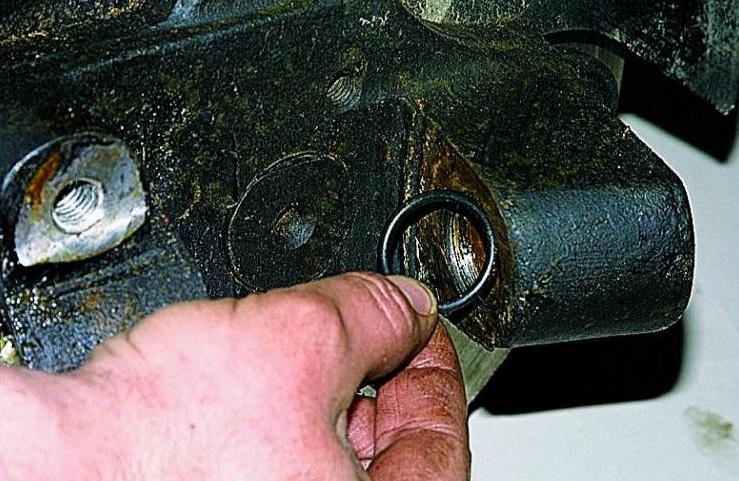 Remove the rubber sealing ring from the upper eye of the steering knuckle. 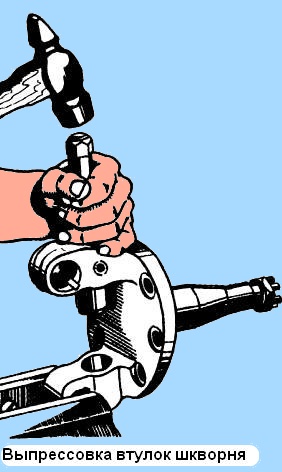 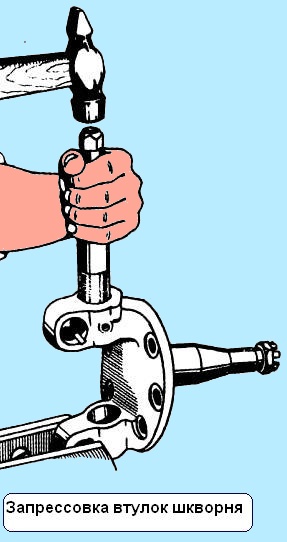 Cleaning the lugs of the steering knuckle 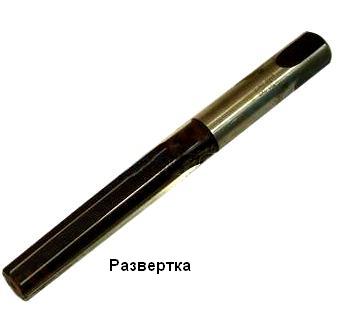 and press new bushings into them using a mandrel. 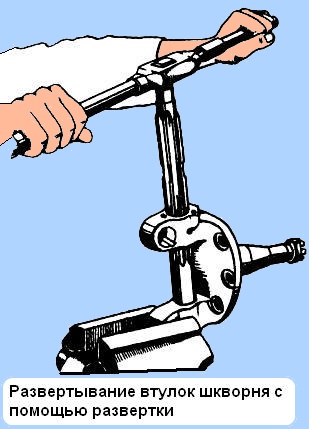 We wash all the details in kerosene. Lubricate the kingpin and its stopper with Litol-24 grease. 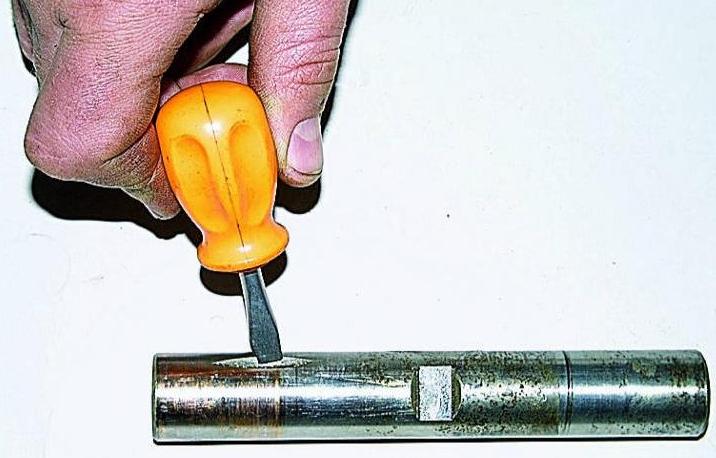 We assemble the pivot connection in the following sequence:

1. we insert the kingpin into the lower lug of the fist, while the lubrication groove of the kingpin should be located below, and the flat for the stopper faces the longitudinal axis of the car.

2. We put a support bearing on the kingpin.

3. We install the steering knuckle on the beam, controlling the alignment of the holes through the upper eye of the fist.

4. We move the king pin up until the flat matches the hole for the stopper.

5. After installing the covers, we inject the connection with Litol-24 grease.

6. We finally assemble all the parts in reverse order and adjust the toe-in.

We lubricate the pivot connection after 10 thousand kilometers.

It is more convenient to work on a viewing ditch.

We carefully wipe the upper and lower kingpin grease fittings with a rag. 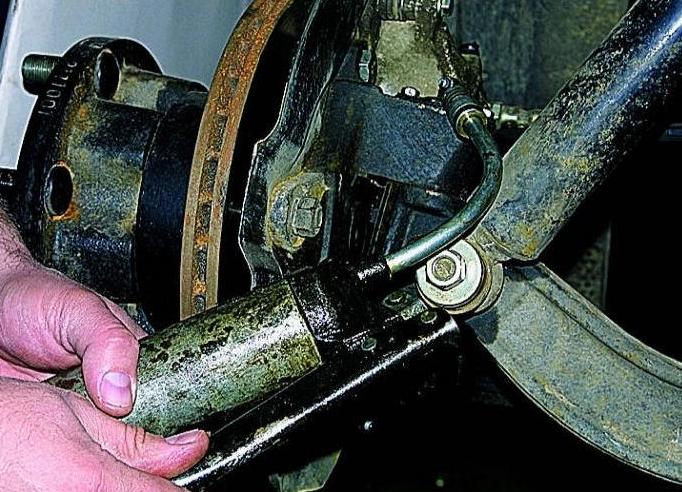 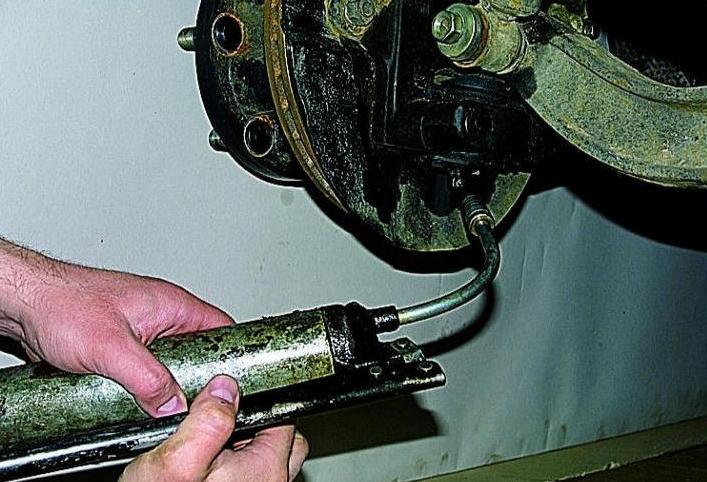 Using an oil syringe, we inject Litol-24 or FIOL grease into the upper oiler

Using an oil syringe, we inject lubricant into the lower oiler until it appears from the joint gaps

If the grease does not come out of at least one gap, it should be start" connection with a mixture of engine oil and kerosene in a ratio of 1: 1 and then lubricate.