The intake pipe is made of aluminum alloy, the exhaust manifold adjacent to the cylinder head is machined in assembly with a non-flatness of 0.2 mm, so disassembly of the assembly is unnecessarily undesirable

The degree of heating can be adjusted manually using the rotary damper 3 depending on the season. 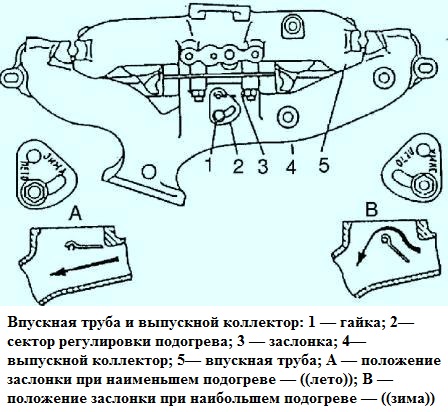 The camshaft is cast iron, cast with a steel gear for driving the oil pump and the ignition distribution sensor; has five support necks of different diameters (for ease of assembly):

The journals rest directly on the surface of the bores in the aluminum cylinder block.

The working surface of the cams and the eccentric of the fuel pump drive is bleached to high hardness when casting the camshaft.

The teeth of the oil pump drive gear are hardened.

Intake and exhaust cam profiles are the same.

The width of the jaws is ground to a cone.

The conical surface of the cam, in combination with the spherical end of the pusher, during engine operation, imparts a rotational movement to the pusher. As a result, the wear of the pusher guide and its end is uniform and small.

The intake pipe and exhaust manifold of the 1st and 4th cylinders are interconnected into one unit through a gasket with four bolts. 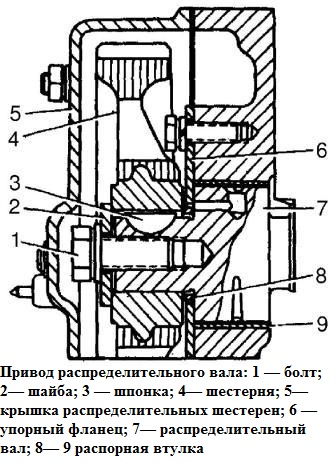 The use of textolite ensures the noiselessness of the gears.

Both gears have two threaded holes M8x1 25 for the puller.

The camshaft rotates 2 times slower than the crankshaft.

The camshaft is held from axial movements by a thrust steel flange 6, which is located between the end of the shaft neck and the gear hub with a gap of 01-0.2 mm.

Axial clearance is provided by a spacer ring 8 sandwiched between the gear and the shaft neck. the surfaces of the thrust flange are phosphated to improve running-in.

The gear is fixed to the camshaft using washer 2 and bolt 1 with M12x1.25 thread. The bolt is screwed into the end of the shaft. 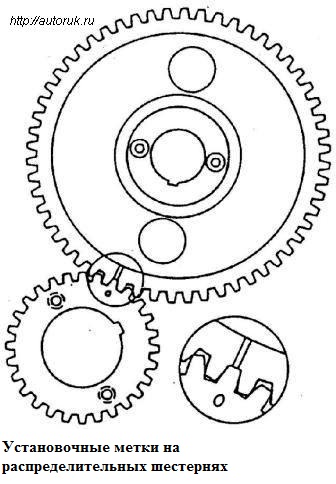 When installing the camshaft, these marks must be aligned.

The specified valve timing is valid for a gap between the rocker arm and the valve equal to 0.5 mm.

Valve rockers 8 are the same for all valves, steel, cast

A bushing rolled from sheet tin bronze is pressed into the hole of the rocker hub.

A groove is made on the inner surface of the bushing for uniform distribution of oil over the entire surface and for supplying it to the hole in the short arm of the rocker arm.

The long arm of the rocker arm ends with a hardened cylindrical surface resting on the end of the valve 2, and the short arm ends with a threaded hole for the adjusting screw.

The adjusting screw 9 has a hexagonal head with a spherical recess for the rod, and a slot for a screwdriver at the upper end.

The spherical recess is connected by drilled channels with a groove on the threaded part of the screw.

The groove on the screw is opposite the hole in the rocker arm, i.e. approximately in the middle of the height of the threaded boss of the short rocker arm.

In this case, the oil passes freely from the rocker channel to the screw channel. 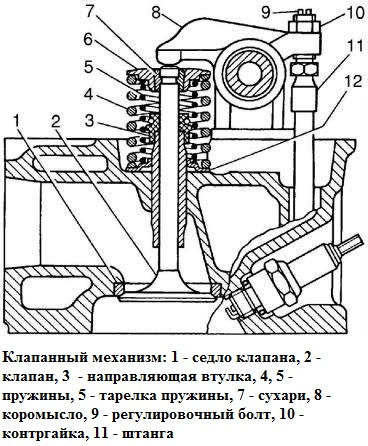 The adjusting screw is locked with locknut 10.

The fourth main rack on the plane adjacent to the cylinder head has a groove through which oil is supplied from the channel in the head to the cavity of the rocker shaft.

The rest of the posts do not have a milled groove, so they cannot be put in place of the fourth post.

Extreme rocker arms are located between the additional and main racks, to increase wear resistance, the outer surface of the axle under the rocker arms is hardened.

Under each rocker in the axle there is a hole for lubrication.

A more heat-resistant chromium-nickel alloy is additionally welded onto the working chamfer of the exhaust valve. valve stem diameter - 9 mm.

The angle of the working chamfer of both valves is 45°.

Valve spring plates 6 and crackers 7 are made of steel and subjected to surface hardening.

Two springs are installed on each valve: outer 4 with variable pitch with left winding and inner 5 with right winding.

Springs are made of heat-treated high-strength wire and shot-blasted.

Steel washers 12 are installed under the springs.

The outer spring is installed downwards with the end having a smaller coil pitch.

The bushings are made by pressing followed by sintering from a mixture of iron, copper and graphite powders with the addition of molybdenum disulfide to increase wear resistance.

The inner hole of the bushings is finished after they are pressed into the head.

The inlet valve sleeve is equipped with a retaining ring to prevent spontaneous movement of the sleeve in the head.

To reduce the amount of oil penetrating through the gaps between the bushing and the valve stem, oil deflector caps 3 made of oil-resistant rubber are pressed onto the upper ends of all bushings.

The camshaft is closed from above by a rocker cover, stamped from sheet steel, with a filter element of the crankcase ventilation system fixed on the inside.

The rocker cover is attached through a rubber gasket to the cylinder head with six screws.

The end face of the pusher is welded with chilled cast iron and ground on a sphere with a radius of 750 mm (the convexity of the middle of the end is 0.11 mm).

Inside the pusher there is a spherical recess with a radius of 8.73 mm for the lower end of the rod.

Near the lower end, two holes are made to drain oil from the internal cavity of the pusher.

The outer diameter of the tappets and the holes for the tappets in the cylinder block are divided into two size groups.

When assembling, the pushers of a certain group should be installed in the holes marked with the corresponding paint.

Push rods. to ensure the stability of the gaps in the valve mechanism when the engine is heated and cooled, the pusher rods are made of duralumin rod.

Steel hardened tips with spherical ends are pressed onto the ends of the rods.

The lower tip, mating with the pusher, has an end with a sphere radius of 8.73 mm, and the upper one, which enters the recess in the rocker adjusting screw, has 3.5 mm.