Pressure reduction in the supply system

Remove the No. 9 fuse (fuel pump fuse) from the right fuse box

Start the engine and let it run until the fuel line runs out of fuel. After that, the engine will stall.

After that, you can disconnect the fuel lines. 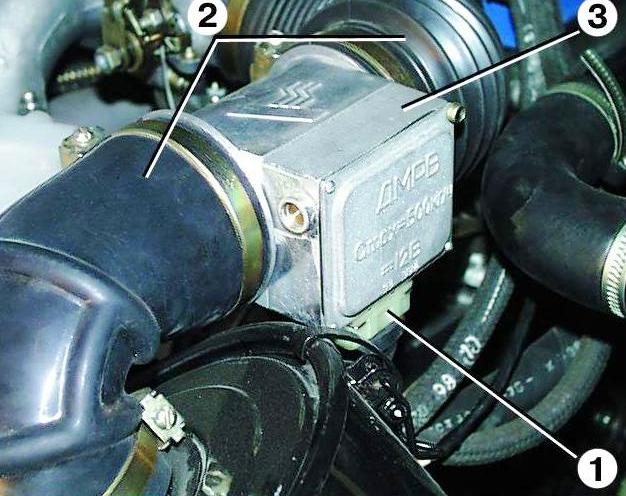 Loosen the clamps, disconnect the air supply hoses 2 and remove the sensor 3.

Then briefly close contacts "4" and "5" between each other. At the same time, the voltmeter should show a voltage of about 8 V, and the platinum thread should become red-hot.

If at least one of these conditions is not met, replace the sensor.

Adjusting the content of carbon monoxide (CO) in exhaust gases 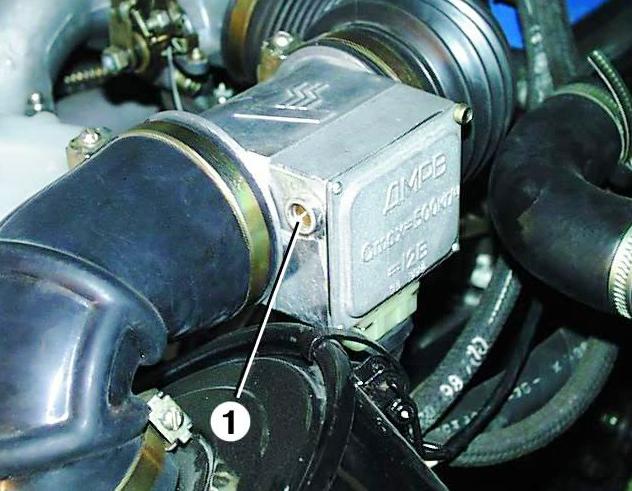 The adjustment is made on a warm engine (coolant temperature 80-90°C) with a good ignition system and nominal gaps between the spark plug electrodes.

Turning the screw clockwise increases the CO content and counterclockwise decreases it. In this case, the content of CH will also be adjusted.

If it is not possible to adjust the content of CO and CH within the specified limits, it is necessary to check the serviceability of the elements of the integrated microprocessor-based engine control system.

Disconnect the wire from the "Negative" terminal of the battery. 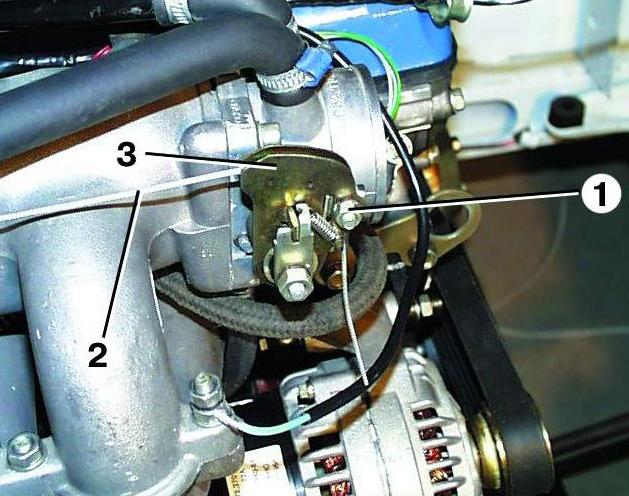 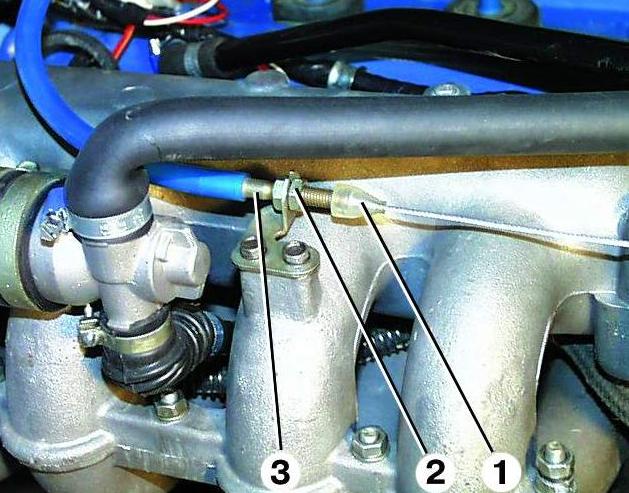 Remove nut 1 and remove accelerator cable 2 from sector 3 of the air throttle actuator.

Remove the tip 3 from the cable, removing it from the outer 4 and inner shells of the cable. 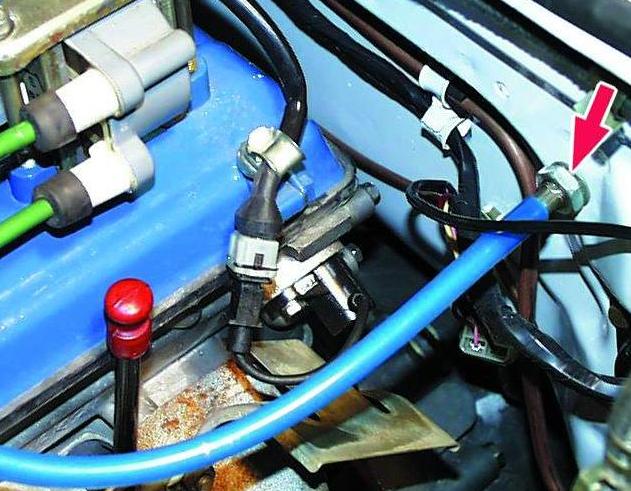 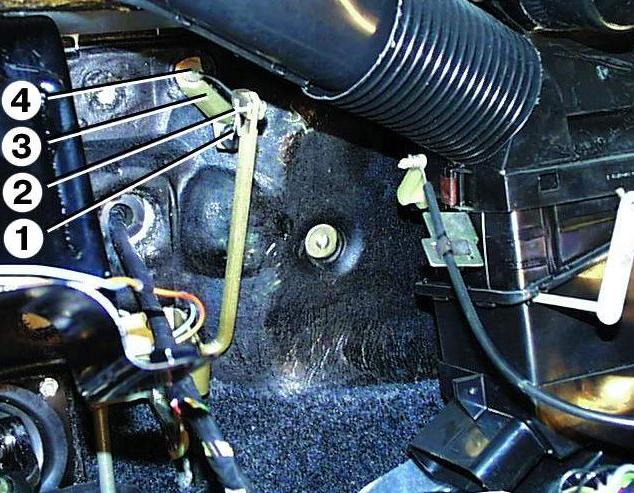 Remove the outer 1 and inner sheaths of the cable from the tip 2 on the bulkhead.

Pull the cable through the tip on the bulkhead shield into the passenger compartment.

Install the new accelerator cable in reverse order and adjust it. 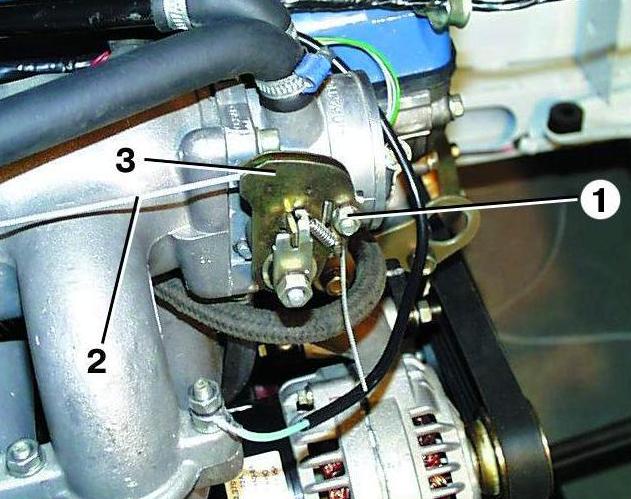 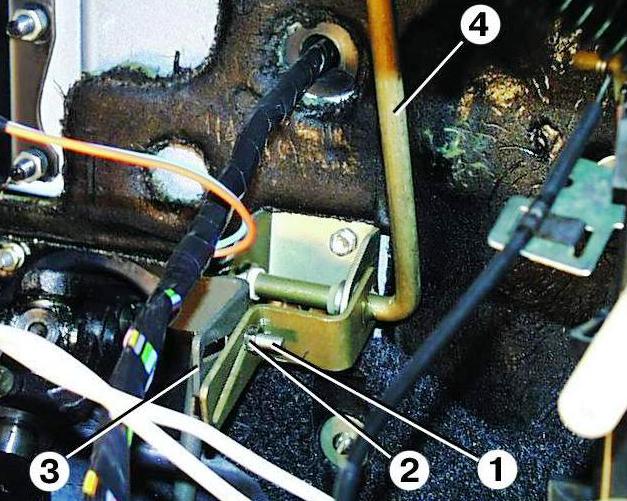 Loosen the nut 2 of the adjusting bolt 1 between the upper 4 and lower 3 accelerator pedal levers. 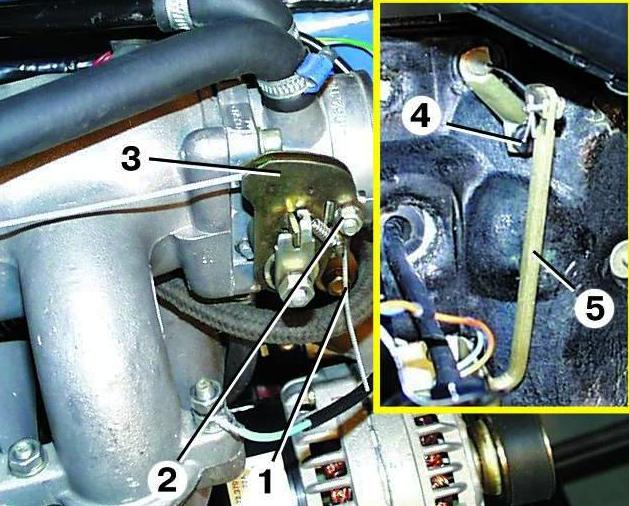 From sector 3 drospull out cable 1 as far as it will go.

In this case, the upper lever 5 of the accelerator pedal must rest against the buffer 4 on the bracket. Tighten nut 2 securing the cable on the sector.

The throttle valve must be fully closed. 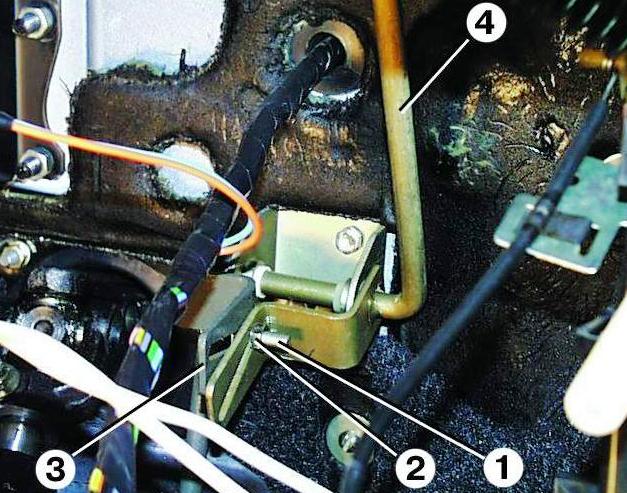 Retract the upper lever 4 of the pedal to the stop.

While holding the upper lever 4 of the pedal in this position, turn the lower lever 3 of the pedal until it stops on the mat and tighten the nut 2 of the adjusting bolt 1

When properly adjusted, when the pedal is fully released, it is completely closed, and the upper lever of the pedal rests against the buffer on the bracket.

With the pedal fully depressed, the throttle should be fully open and the lower pedal arm should rest against the mat.

In this case, the throttle valve must be fully open. 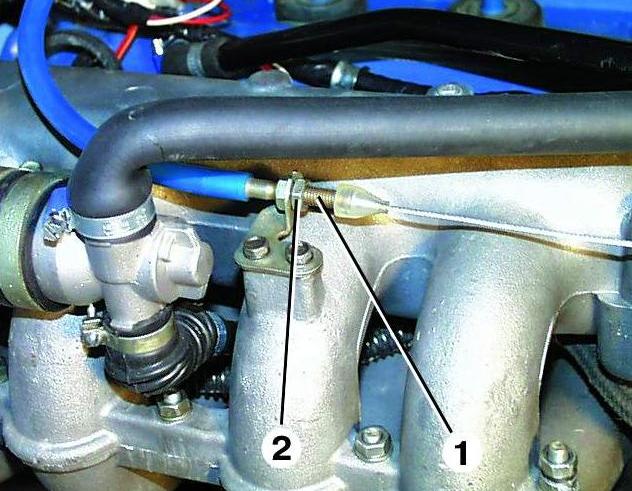 You can correct the position of the cable by moving the tip 1 of the sheath in the bracket, loosening the nut 2.

Disconnect the accelerator cable from the throttle sector 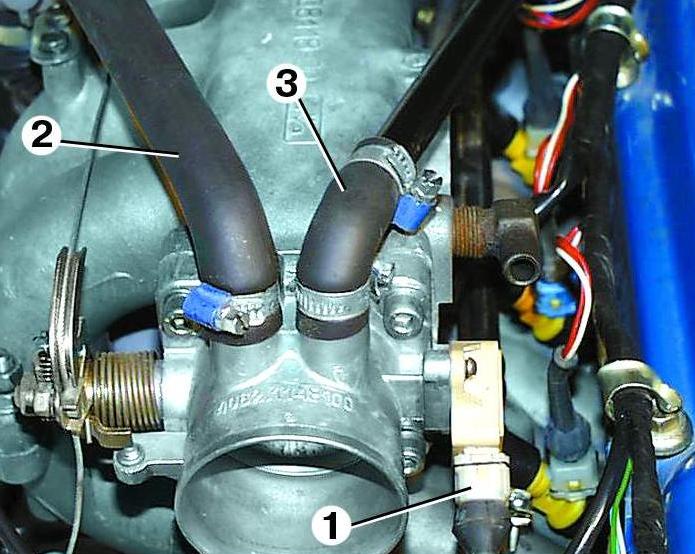 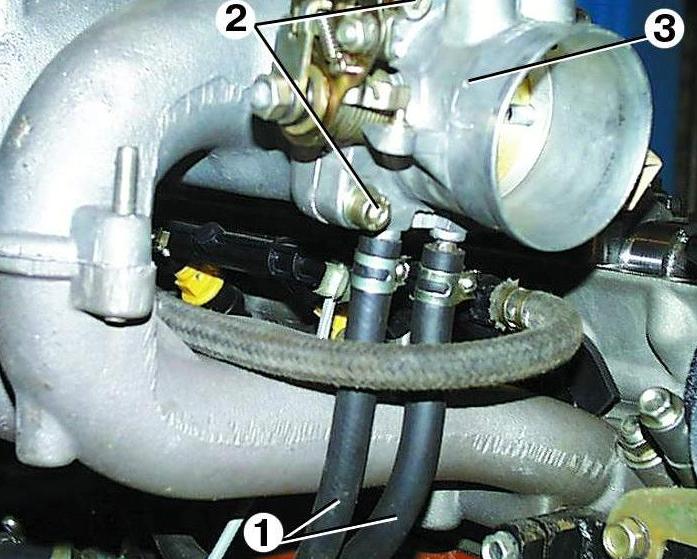 Loosen the clamps and disconnect the idle speed control 2 and crankcase ventilation hoses 3.

Loosen the clamps and disconnect the throttle heating hoses 1, having previously marked them.

Immediately plug the hoses with plugs to prevent loss of coolant.

Remove the four mounting bolts 2 and remove the throttle 3 with the gasket. 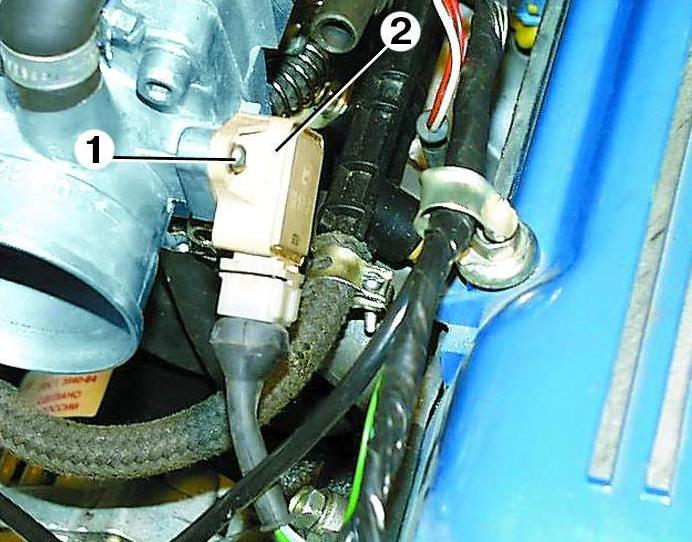 If it is necessary to remove the throttle position sensor 2, unscrew the two screws 1 securing it 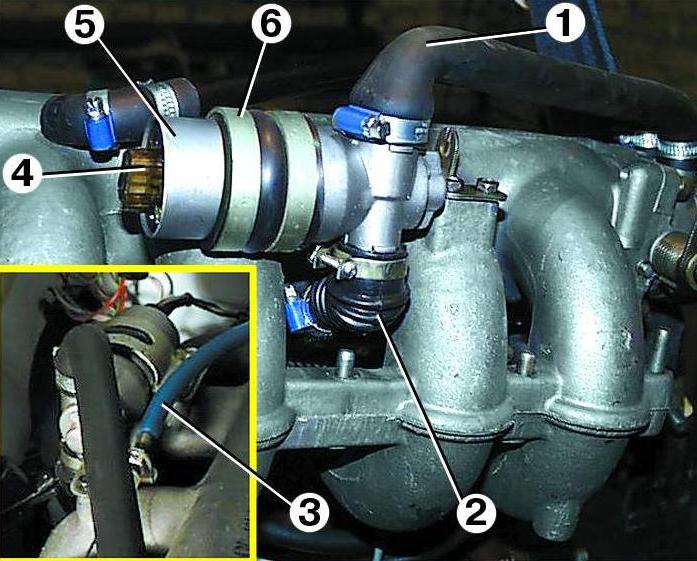 Loosen the clamps and disconnect hoses 1 and 2 from the regulator 5.

Disconnect the connector with wires from connector 4 of the regulator.

Unscrew the two bolts 3 fastening and remove the regulator.

This should rotate the shutter to open or close the inlet port. If this does not happen, then the regulator is faulty and needs to be replaced.

Reduce the pressure in the fuel system if the engine has just been stopped. 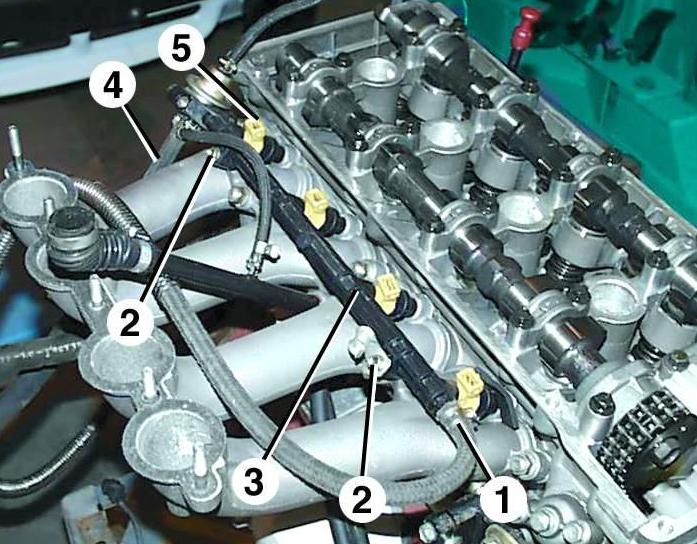 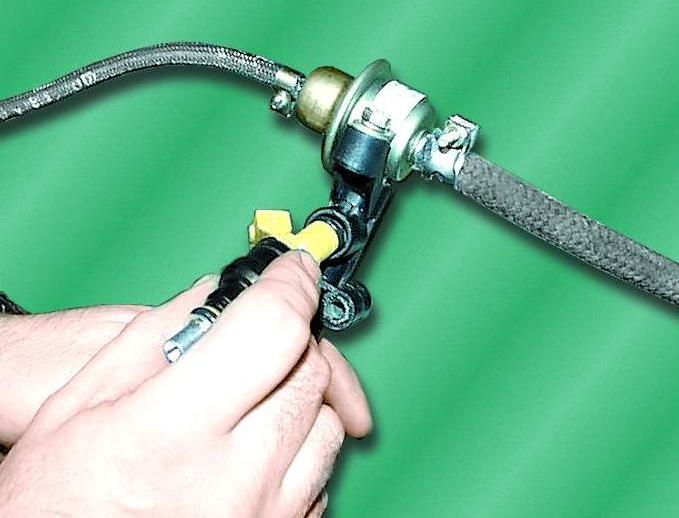 Loosen the clamps and disconnect the fuel supply hose 1 from the fuel line 3 of the engine.

Disconnect the fuel drain hose 4 from the pressure reducing valve.

Disconnect the pads with wires from the connectors 5 of the four injectors.

Remove the injector from the engine fuel line. The nozzle is fixed in the opening of the fuel line only with the help of a sealing ring.

Unscrew the two fastening bolts 2 and carefully remove the fuel line 3 of the engine, removing the nozzles from the holes in the intake pipe.

Injectors are fixed in the intake pipe holes only with O-rings.

To check the tightness of the injector valve, you need to lower the atomizer 1 of the injector into a container with gasoline or kerosene and apply compressed air at a pressure of 0.3 MPa (0.03 kgf/cm).

If air bubbles come out of the nozzle atomizer, then the nozzle valve is leaky and the nozzle needs to be replaced.

To check the health of the injector solenoid winding, apply a direct current of 12 V to the injector connector.

In this case, a characteristic click should be clearly audible, which indicates the opening of the nozzle valve.

If this does not happen, then the nozzle is faulty and must be replaced. This test can be carried out without removing the nozzle from the vehicle.

The resistance of the injector solenoid coil can be checked with an ohmmeter by connecting it to the injector connector pins.

Resistance should be between 15.5-16 ohms. If the resistance value does not fall within the specified limits, replace the nozzle. 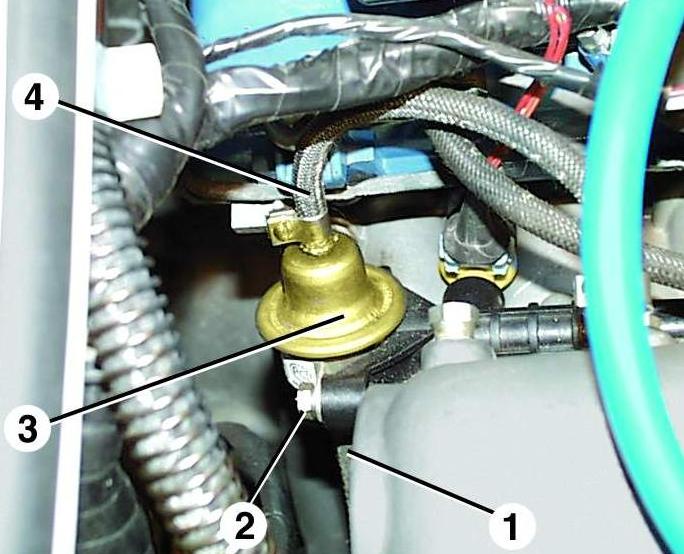 Depressurize the fuel system if the engine has just been shut down.

Replacing and checking the timing sensor 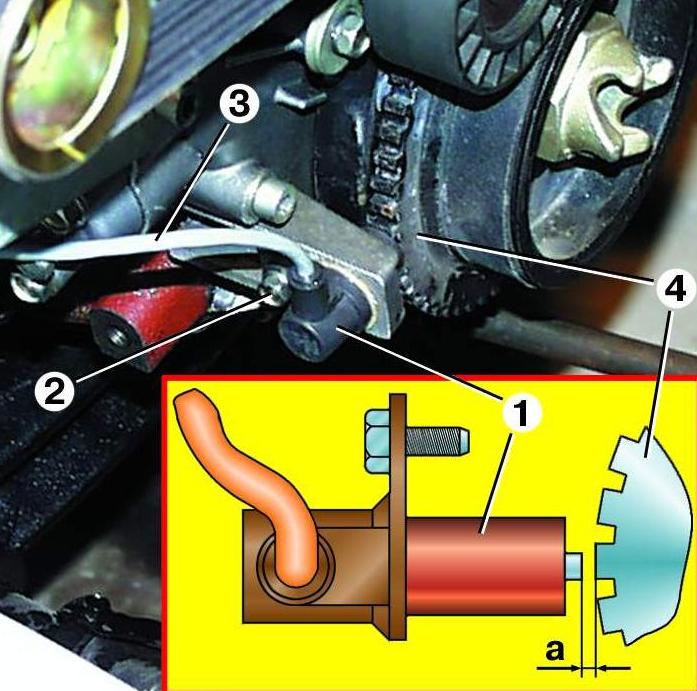 Install the sensor in reverse order. For normal operation of the sensor, the gap "a" between the sensor 1 and the synchronization disk 4 must be within 1.0–1.5 mm.