Possible malfunctions of the quick release valve include: leakage of compressed air through the connector of the cover 2 (Fig. 1) and body 1, which occurs due to loosening of the cover fastening or a defect in the sealing ring 4, and the release of compressed air into the environment from the outlet III due to membrane failure 3.

To disassemble the quick release valve, unscrew the four screws securing the cover 2. When replacing the membrane 3, the rubber sealing ring 4 must be replaced at the same time. 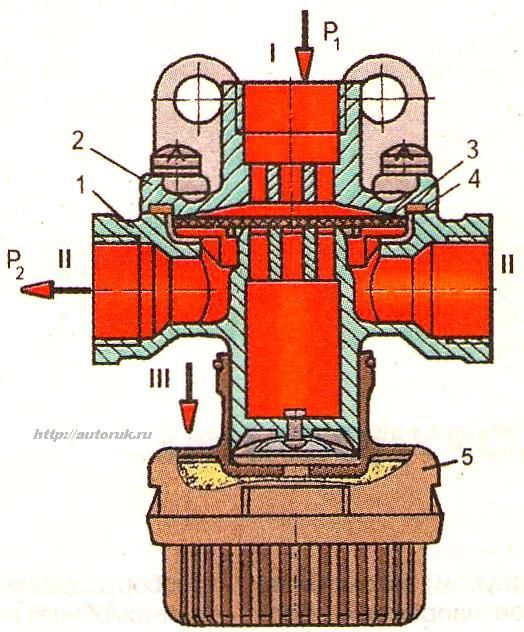 After assembling the valve, it must be installed on the stand and tested for operability and tightness according to the scheme shown in Fig. 1 (close the right outlet II with a plug), according to the following procedure.

Inject and release air at a pressure of 0.75 MPa three times into port I.

set the pressure in port 1 to 0.02 MPa. In this case, pressure should appear in port II.

The valve should be checked for leaks at a pressure of 0.5 MPa in outlet I. When soaping, the appearance of air bubbles is not allowed for 1 minute.

Next, you need to set the pressure to 075 MPa in ports I and II and sequentially lower the pressure in port I.

At the same time, a corresponding decrease in pressure should be observed in outlet II, and air should escape from the atmospheric outlet III.