Crank the crankshaft to the start of the compression stroke.

To determine this moment, you need to turn out the candle of the 1st cylinder and close the hole for the candle with your finger.

At the beginning of the compression stroke, air will begin to escape from under the finger. 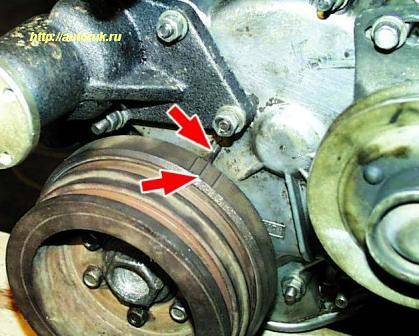 Carefully turn the crankshaft until the second mark on the pulley matches the boss on the cover of the timing sprockets. 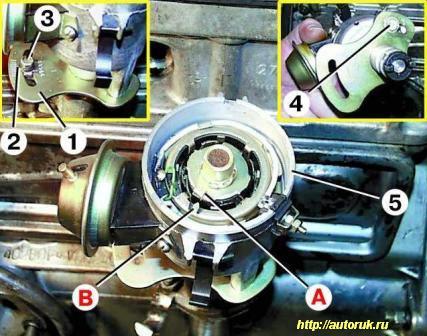 Loosen bolt 3 securing the distributor. Set pointer 2 of the octane corrector to the middle of scale 1 and tighten bolt 3.

Lightly press the slider against its rotation (clockwise) with your finger to select the gaps in the drive.

Holding the slider, slowly turn the body 5 of the distributor until the red mark "А" on the rotor coincides with the arrow "B" on the stator.

Install the distributor cap and connect the high voltage wires in accordance with the firing order of cylinders 1-2-4-3.

Check the ignition timing. To do this, warm up the engine to a temperature of 80-90 ° C and, moving along a flat road at a speed of 30-40 km / h, sharply press the accelerator pedal all the way.

At the same time, detonation should be heard for a short time.

If no detonation is heard, then the ignition is late.

For early ignition, turn the distributor housing one scale division towards the "+" (counterclockwise), and for late ignition - towards the "-" (clockwise).

Then check the ignition timing again while driving as described above.

8. A more accurate setting of the ignition timing can be made using a stroboscope in accordance with the instructions supplied with the stroboscope.