Replacing the threaded hinges of the GAZ-3110 front suspension strut

Mount the vehicle on a lift or a pit

Clean the attachment points of the levers from dirt.

If the vehicle is in a ditch, apply the parking brake, chock the rear wheels, raise the front of the vehicle and place it on jack stands.

Install a jack (preferably hydraulic) under the spring cup and, lifting the cup with it, load the spring.

If the car is mounted on a lift, first remove the wheel, and then place a stable support under the spring cup and, carefully lowering the car, load the spring. 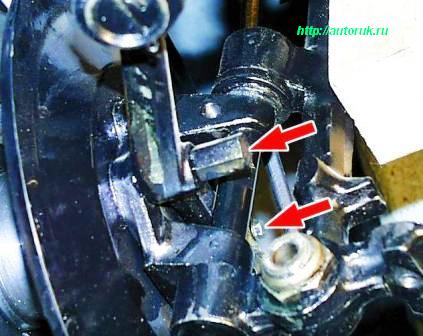 Remove the upper arms and lower arms from the rack. Remove the steering knuckle with the rack assembly. 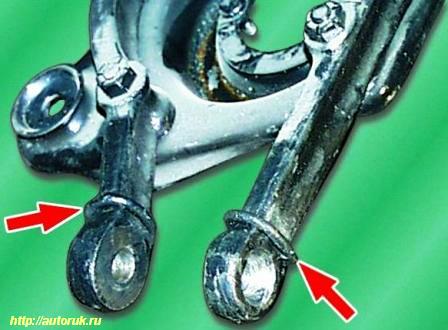 For ease of installation, put the rubber seals of the bushings on the ends of the levers. 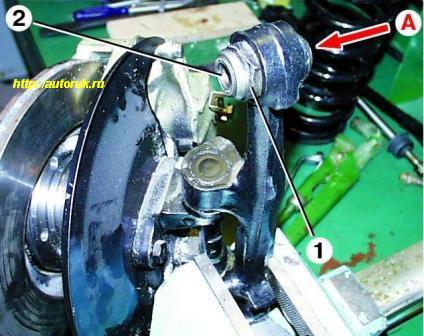 Insert the wide head bolt into the spacer hole and press the outer sleeve out of the strut head, applying force on the head of the bolt (in the direction of arrow A).

Thoroughly clean the head of the rack from dirt.

Remove the grease fitting from the head of the strut, clean the channel for lubricating the threaded joint with a soft wire and blow it with compressed air.

Push in a new threaded bushing using a mandrel, applying force to the hexagon of the bushing. In this case, it is necessary to combine the lubrication holes in the bushing and the head of the rack.

Screw the spacer sleeve into the threaded sleeve so that its ends protrude the same length on both sides.

Further, installation work should be carried out in the reverse order of disassembly. In this case, the heads of the fingers should be directed forward along the course of the car.

It should be borne in mind that the final tightening of the threaded connections of the lever fastening is carried out only on the suspension, which is in a loaded state.

In the same way, replace the threaded bushings of the lower arms.

Lubricate the threaded joints with gear oil through the grease fittings.

Check the setting of the angles of the front wheels. (GAZ-3110 camber)