The design of the front suspension of the car Gazelle

The pivots have a flat in the center and are locked in the holes of the beam with wedge stoppers.

Vertical loads from the steering knuckles are transferred to the beam by ball thrust bearings closed from dirt by rubber-metal caps. 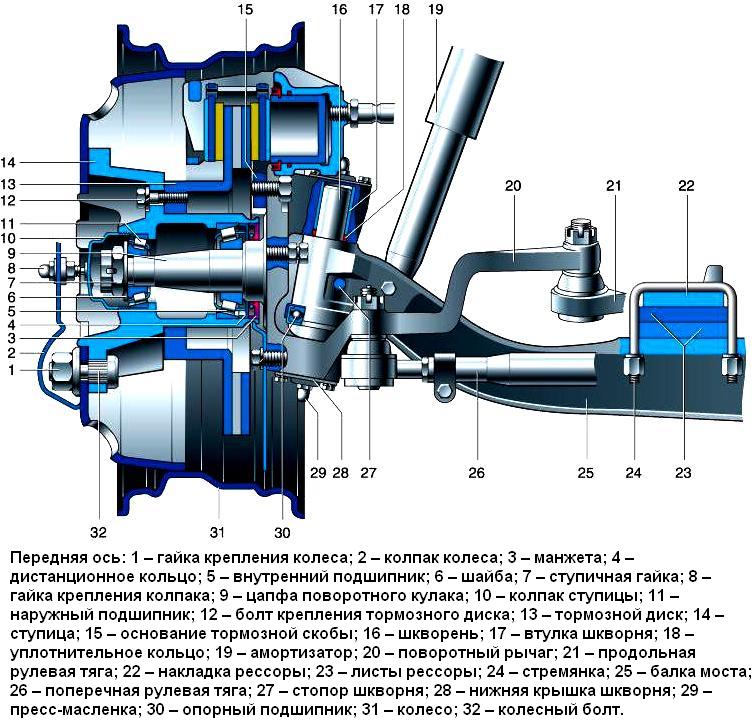 In the upper bosses of the steering knuckles, annular grooves are made, in which sealing rubber rings are installed, protecting the friction surfaces of the bushings and pivots from dirt.

The pivot holes in the bosses of the steering knuckles are closed with covers with gaskets.

To lubricate the pivot bushings, grease fittings are installed in the center of the covers.

Spiral grooves are made in the bushings of the steering knuckles for the passage of lubricant.

The steering knuckles consist of two parts - a flange and a trunnion pressed into it.

The front wheel hubs are mounted on trunnions on two tapered roller bearings. The tightening of the bearings is regulated by a nut.

The steering trapezoid is located behind the front axle beam.

The trapezoid arms are bolted to the steering knuckles. During assembly, their threads are covered with a sealant that prevents them from unscrewing during operation.

The tips have a different thread direction, which allows you to adjust the toe-in without removing the tie rod from the car.

The suspension is made on longitudinal leaf springs with two hydraulic shock absorbers. 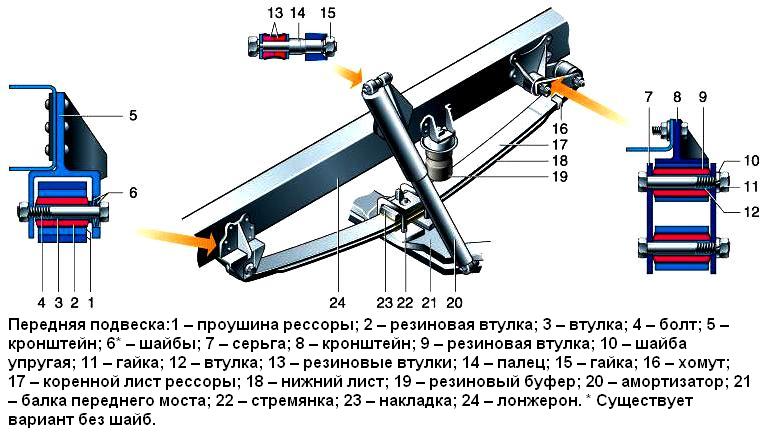 The suspension can be used with small leaf or multi-leaf springs. The small-leaf spring consists of two sheets, tightened with a clamp and a center bolt.

A multi-leaf spring has four leaves.

The spring is attached to the frame brackets through the ears formed by the bent ends of the sheets, while the front eyelet forms two sheets, and the back one only the upper (root) sheet.

The rear eye is attached to the spar through an earring that compensates for the change in the distance between the ends of the spring during suspension operation.

The spring is attached to the bridge beam with stepladders through the overlay.

To limit the upward travel of the suspension, a rubber buffer is installed above the spring.

The lower end (reservoir) is attached to the bridge beam, and the upper end (rod) to the frame spar bracket.

Rattle in the front suspension

Reducing the efficiency of the front shock absorber

Wheels out of balance - Balance wheels

Long-term operation of an overloaded vehicle - The same