Replacing the valve seals of the car Gazelle

An external sign of wear on the valve stem seals is the short-term appearance of blue smoke from the exhaust pipe after starting the engine, as well as when braking the engine after a long drive under load. With this, constant smoking is usually not observed

To replace the valve stem seals, the cylinder head must be removed from the engine.

You will need: the same tools as when replacing the head gasket, as well as pliers, a valve spring compressor, round-nose pliers or tweezers to remove valve cotters, a mandrel for pressing oil seals, a hammer.

Compress the valve springs with a tool, placing a suitable stop under the valve plate on the back of the head, and remove the crackers from the spring plate.

To make the plate of springs come off the crackers more easily, you can apply a light blow with a hammer on the hard bipod of the cracker. 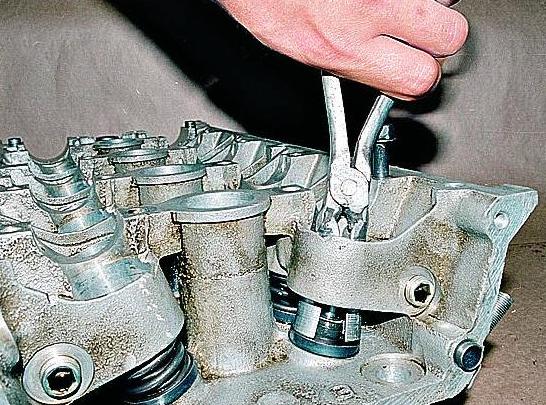 Remove the tool and remove the spring plate 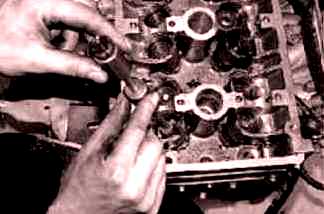 Can be removed with an inertial puller

This is how the inertial oil seal remover looks like. The puller shown has a mandrel on the other end for pressing on the caps.

Do not remove the cap by working with pliers or prying it from both sides with screwdrivers.

The guide sleeve, on which the cap is put on, is made of sintered metal, and its edge breaks off easily. 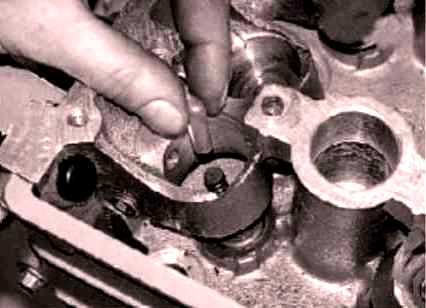 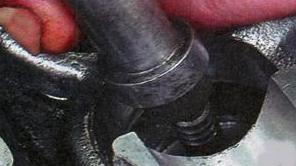 Lubricate the inside of the new valve stem seal with engine oil and slide the cap over the valve stem to the guide sleeve.

Install the mandrel for pressing the cap. With light blows of the striker on the mandrel, press the cap in until it stops.

Remove the safety mandrel, install the springs and valve cotters in the reverse order of removal.

After installing the cotters and removing the valve spring compressor, apply a few light blows with a hammer on the end of the valve stem so that the cotters are guaranteed to be fixed in the groove of the stem.

If the skewed crackers remain unfixed, when the engine is started, the “dry” valve will fall into the cylinder, which will lead to a serious engine failure.

Before installing the hydraulic tappet, dip it into a container of engine oil and press the tappet sleeve several times until air bubbles stop escaping. At the same time, the hydraulic pusher should become rigid.

Replace the valve stem seals in the same way.

Install on engine cylinder head and all removed components and parts.