How to replace steering rods and joints of a Gazelle car

Tie rod joints are replaced in case of backlash

The transverse link can be replaced as an assembly, or separately its tips or their hinges.

If fasteners are heavily soiled, clean them with a wire brush and treat with a light penetrating lubricant such as WD-40. 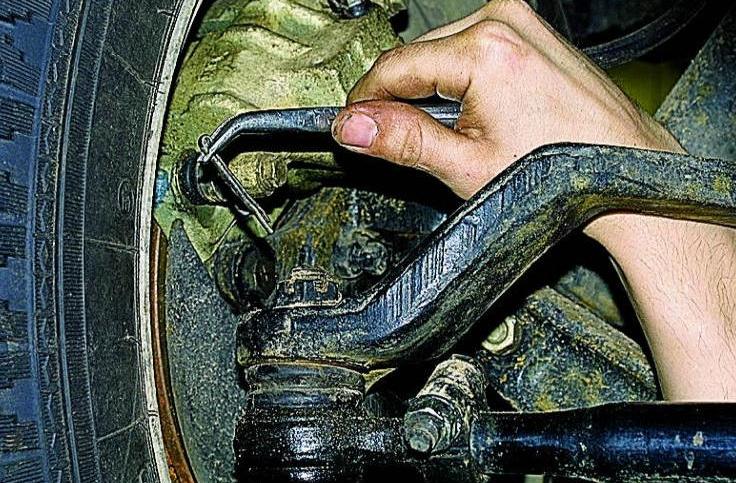 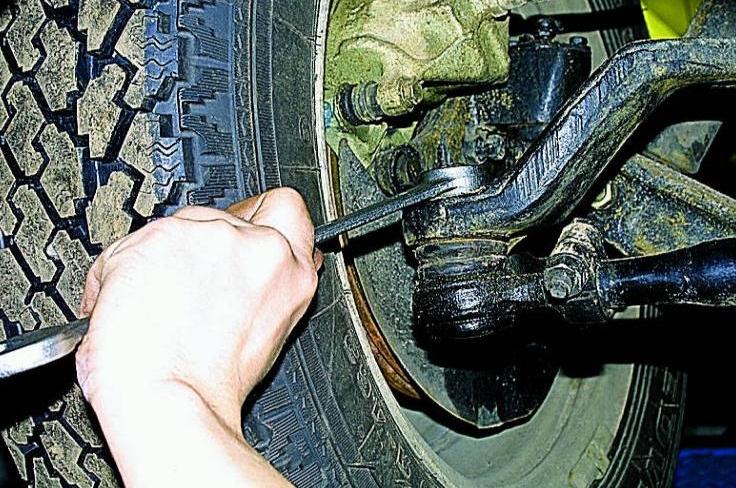 Using pliers, we unpin the nut of the transverse link

Using the “24” key, unscrew the nut securing the transverse link to the lever. The nut should be left on the thread of the pin. 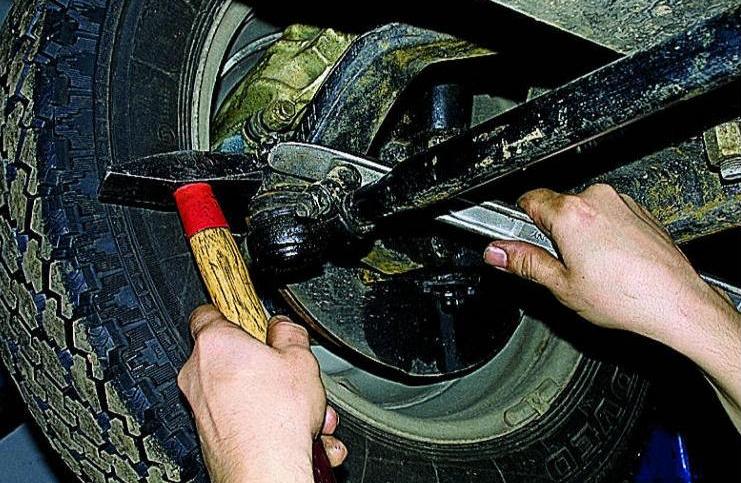 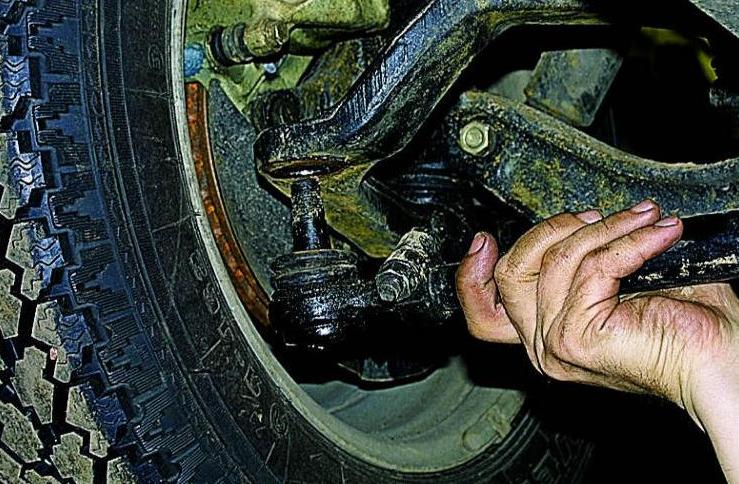 Using the swing arm as a support, we “strain” the finger, resting the mounting blade on the transverse link.

By hitting the lever with a hammer, we press out the finger.

Having unscrewed the nut, we remove the pin from the hole of the transverse link. 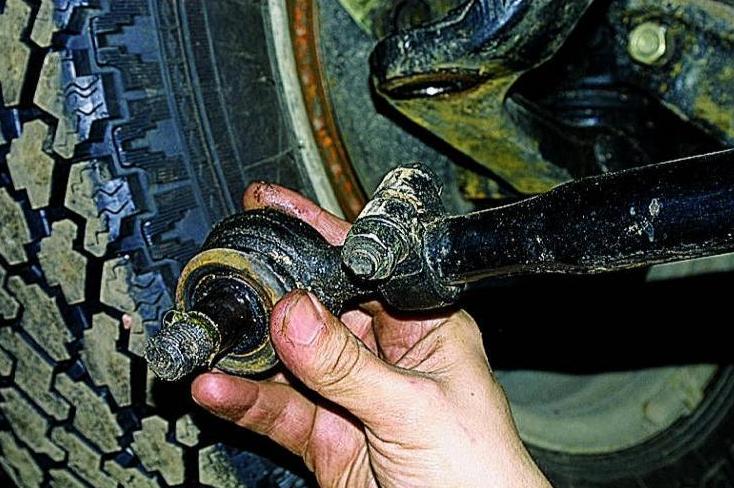 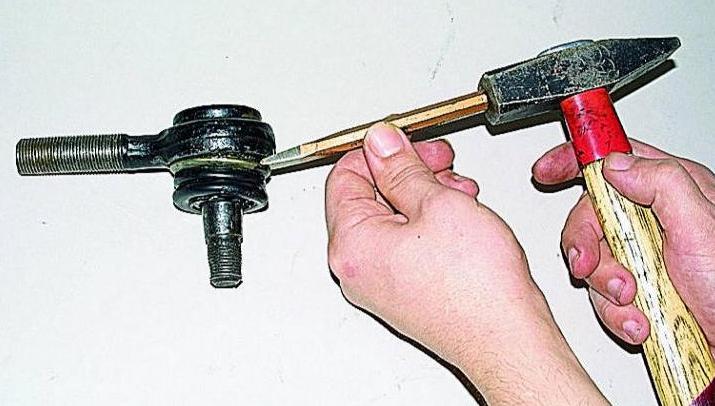 Weaken the tightening of the traction clamp. By rotating the tip, we turn it out of the steering rod.

To replace the hinge, pry the seal with a screwdriver or a thin chisel 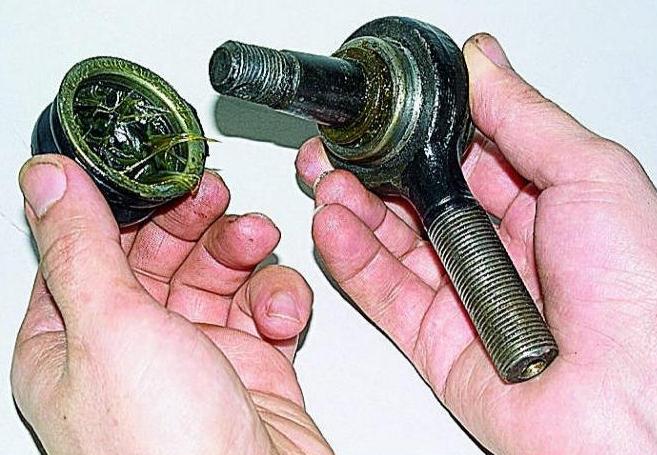 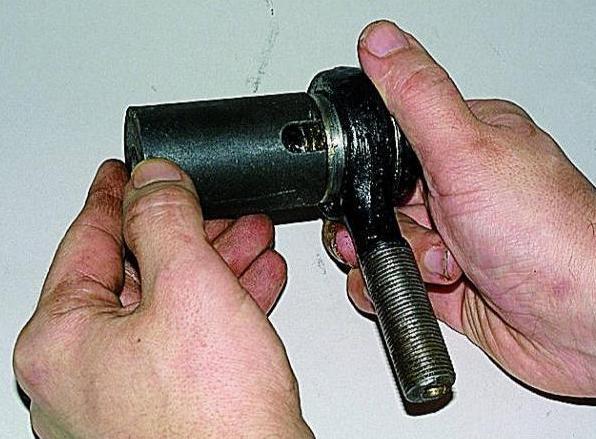 We select (make) two mandrels from pipes of a suitable diameter. 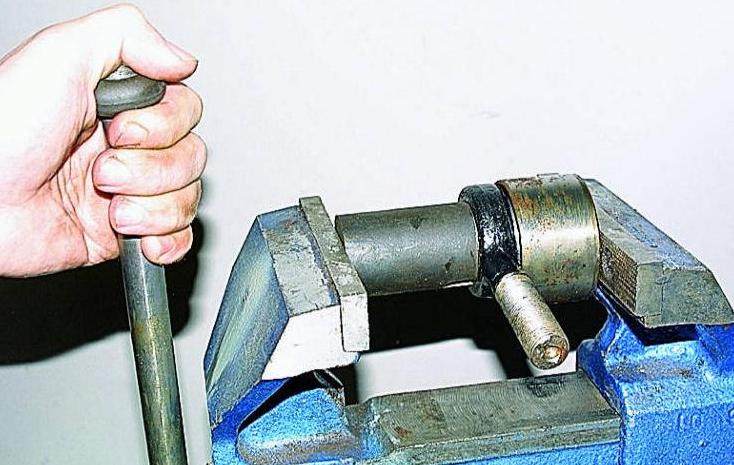 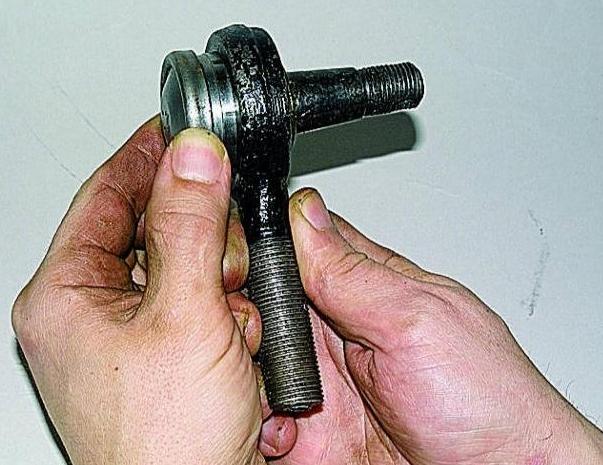 Putting a mandrel under the hinge, clamp the tip in a vise.

Tightening the vise, press the hinge body out of the rod end through the second mandrel.

Installing a new hinge in the hole of the rod. 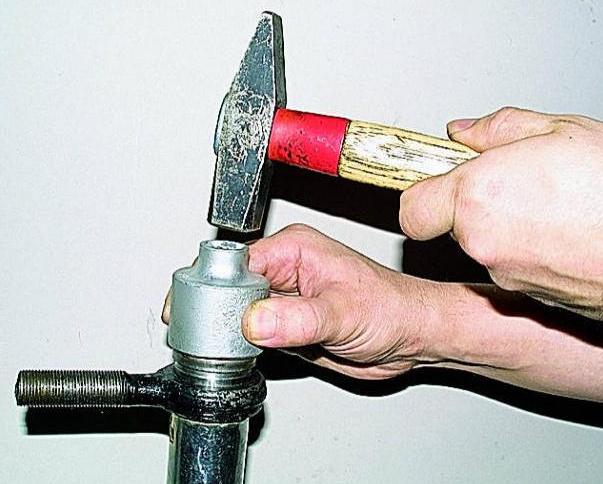 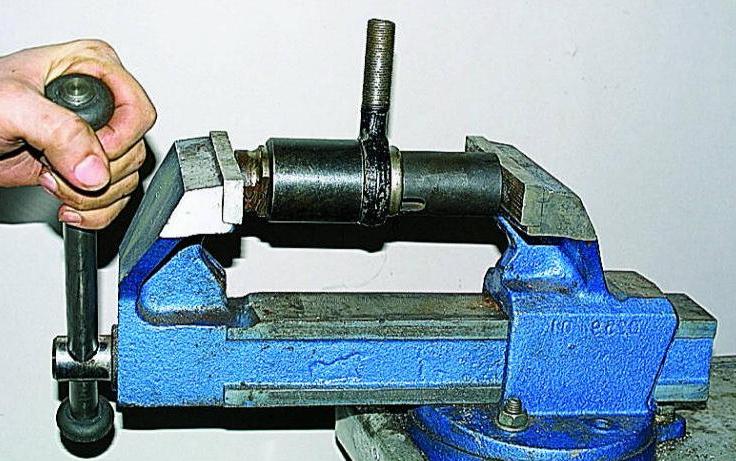 We press the new hinge through the mandrel, resting the tip on a pipe of suitable diameter and length

Can be pressed in a vise

We put ShRB-4 grease in the hinge seal, put it in place and wrap the assembled tip into the rod.

When replacing the tip assembly, we do not press out the hinge, but immediately screw a new one into the rod.

Similarly, we replace the hinge or tip on the other side of the rod.

The tips of the right and left sides are not interchangeable, as they have threads in the opposite direction.

We install the tie rod in the reverse order, covering the hinge pins with any grease.

After installing the traction, we adjust the toe of the front wheels. 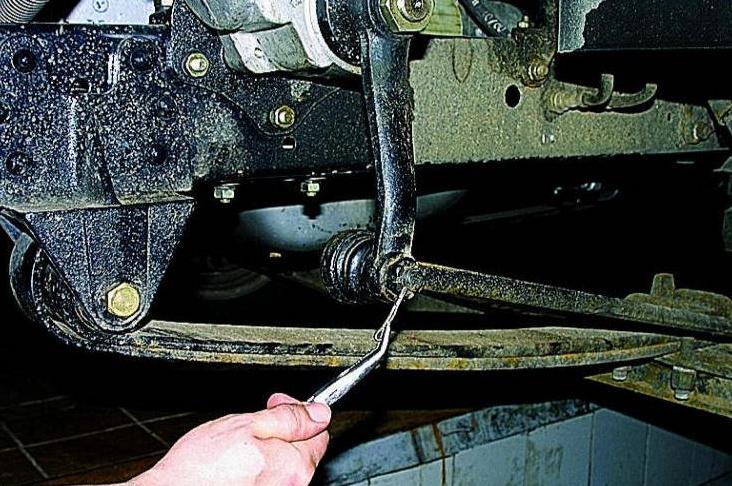 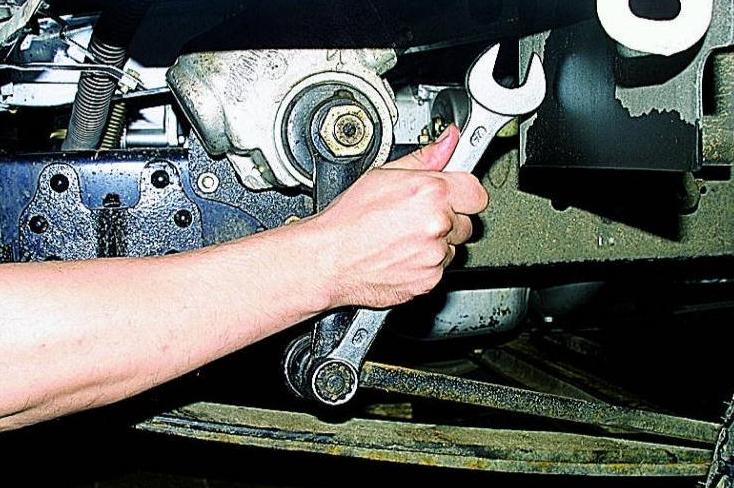 To replace the hinges of the longitudinal rod with pliers, unpin the nut

Using the “24” key, we unscrew the nut that fastens the longitudinal rod to the bipod. 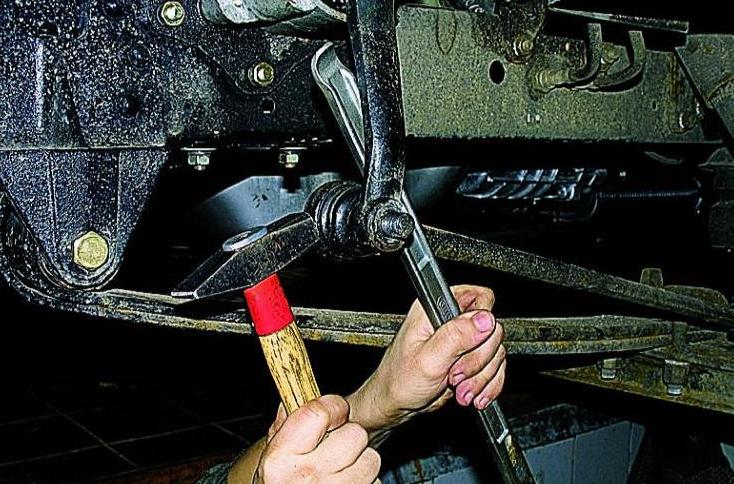 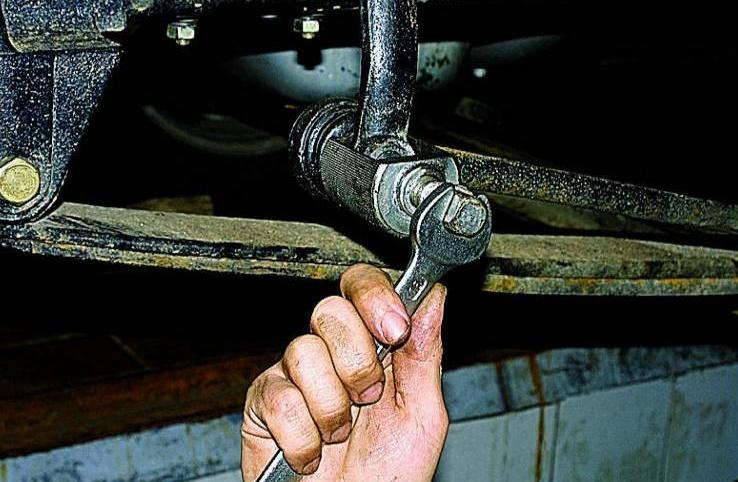 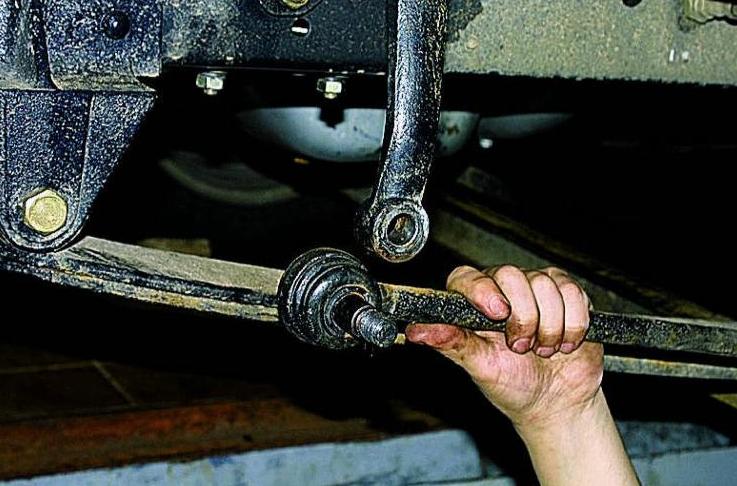 Squeezing the rod from the bipod with a mounting spatula and hitting the bipod boss on the side with a hammer, we press out the finger

It is possible, using a special puller, to press out the finger

Disconnect the longitudinal link from the bipod.

Similarly, we disconnect the longitudinal rod from the swing arm.

Repress the longitudinal steering rod joints in the same sequence as for the transverse rod or replace the rod assembly.

Install the new rod in the reverse order, lubricating the conical surfaces of the fingers with any lubricant.