Pistons are cast from high-silicon aluminum alloy and heat treated

The piston head is cylindrical with a flat bottom. Three grooves are machined on the cylindrical surface of the head, compression rings are installed in the top two, and an oil scraper in the bottom.

Through the same slots, oil removed by the oil scraper ring is discharged into the crankcase

The piston skirt is oval in cross section, and barrel-shaped in longitudinal.

The major axis of the oval is located in a plane perpendicular to the axis of the piston pin.

The diameter of the skirt gradually decreases both towards the bottom and in the opposite direction, the maximum decrease in diameter at the edge of the chamfer under the lower groove is 0.034-0.064 mm, at the lower edge of the supporting part of the skirt - 0.050-0.080 mm.

The axis of the hole for the piston pin is shifted from the middle plane by 1.5 mm to the right (along the vehicle) side, to reduce the noise from shifting the piston from one wall of the sleeve to another when changing the direction of piston movement (up - down).

A steel thermoregulating insert is poured into the piston body between the lower groove and the hole for the piston pin, which serves to reduce piston deformations when heated to operating temperature and reduce the initial mounting clearances during assembly

To ensure the required clearance, pistons and liners are divided (in diameter) into five groups, indicated by the corresponding letter, which is knocked out on the piston bottom and applied to the outer surface, the lower part of the sleeve.

To improve running-in, the surface of the piston is coated (electrolytically) with a layer of tin 0.001 - 0.002 mm thick.

In order for the pistons to work correctly, they must be installed in the cylinders in a strictly defined position.

To do this, one of the piston bosses has the inscription "FRONT", in accordance with this inscription, the piston with the indicated side must face the front of the engine 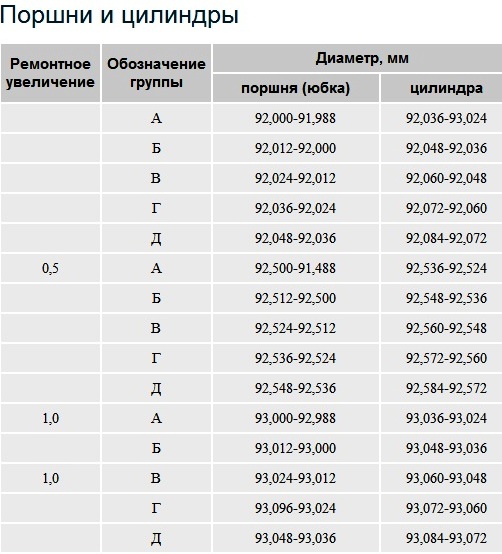 The top compression ring works in the most severe conditions at high temperature and pressure, as well as with a lack of lubrication).

To increase wear resistance, its outer surface adjacent to the cylinder is coated with a layer of chromium.

The chromium layer greatly increases the life of the top ring. This also helps to increase the service life of the lower cylinder ring. 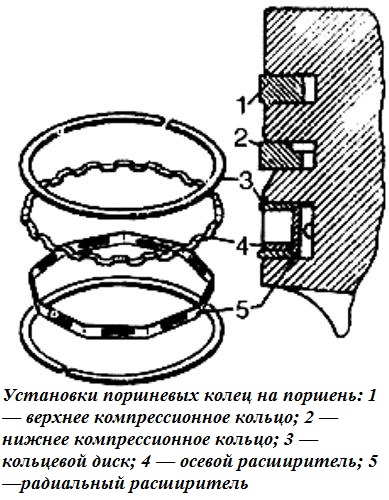 The outer cylindrical surface of the lower compression ring is coated with a layer of 0.006-0.012 mm thick tin (or the entire surface of the ring has a phosphate coating), which improves its running-in

There is a recess on the inner cylindrical surface of the lower compression ring, due to which the new rings installed in the cylinder turn out a little and come into contact with the cylinder only with an edge

This speeds up and improves the running-in of the rings to the cylinder bore.

On the piston, the ring must be installed with a groove up, violation of this condition causes a sharp increase in oil consumption and engine smoke

The top ring has no undercut

The working cylindrical surface (adjacent to the cylinder) of the annular disks is covered with a layer of chromium 0.080-0.130 mm thick.

The height of the compression rings is 2 mm, the oil scraper assembly is 4.9 mm The lock of the rings is straight

The floating piston pins (they are not fixed in the piston or in the connecting rod) are made of low-alloy steel by cold heading.

The outer surface of the finger is subjected to carbon saturation to a depth of 1-1.5 mm and hardened by heating with HDTV to a hardness of HRC 59-66.

The outer diameter of the finger is 25 mm

To prevent the sound of fingers, they are selected to the pistons with the minimum clearance allowed by the lubrication conditions

Since the linear expansion of the piston material is approximately 2 times greater than that of the pin, at room temperature the pin enters the holes of the piston bosses with an interference fit

For ease of selection, pins, connecting rods and pistons are divided into size groups. 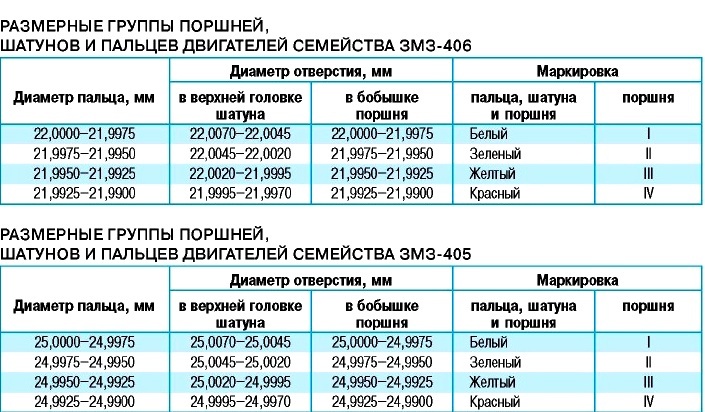 In the piston, the pin is held by two retaining rings made of round, spring wire with a diameter of 2 mm. The rings have a mustache bent to the side.

The crank head of the connecting rod is detachable.

The crank head cover is attached to the connecting rod with two bolts with a ground seat.

The cap bolts and nuts of the connecting rod bolts are made of alloy steel and heat treated.

To prevent a possible mistake, the cylinder numbers are engraved on the connecting rod and on the cap on the bolt boss. They should be located on one side.

In addition, the recesses in the cap and connecting rod for the fixing tabs of the liners should also be on the same side.

In the rod of the connecting rod at the crank head there is a hole with a diameter of 1.5 mm through which the cylinder mirror is lubricated. This hole should be directed to the right side of the engine, i.e., in the direction opposite to the camshaft.

To ensure the dynamic balance of the engine, the total mass of the piston, piston pin rings and connecting rod installed in the engine can have a difference in cylinders of no more than 12 g, which is ensured by selecting parts of the appropriate mass.

To ensure the above difference in the mass of parts in one engine (12 g), the connecting rods are divided into four groups by weight and must be selected for the length of one engine with a difference of no more than 5 g.

The diameter of the main journals is 64 mm, the crankpins are 58 mm.

Under the action of centrifugal forces arising from the rotation of the crankshaft, metal particles of wear products contained in the oil are deposited in the cavities of the connecting rod journals.

Oil is supplied to the cavities of the connecting rod journals through the holes in the cheeks of the shaft from the annular groove on the liners of the main journals of the crankshaft. 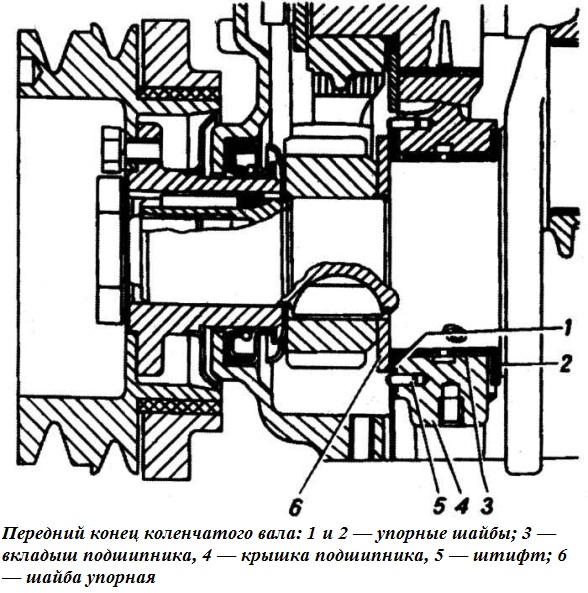 The axial movement of the crankshaft is limited by two steel-aluminum thrust washers 1 and 2 located on both sides of the front main bearing.

The front washer is kept from rotating: by two pins 5 pressed into the block and the main bearing cap.

The protruding ends of the pins fit into the grooves of the washer.

The rear washer is kept from rotating by its protrusion, which is included in the groove on the rear end of the main bearing cap.

At the front end of the crankshaft, a steel thrust washer, camshaft drive gears, an oil deflector, and a crankshaft pulley hub are installed on the dowels.

All these parts are tightened with a bolt screwed into the front end of the crankshaft.

The keyway in the pulley hub is sealed with a rubber plug.

To the hubs The crankshaft pulley is attached with six bolts, from which the fan, the water pump impeller and the generator pulley are driven by two belts.

A special device is mounted on the pulley - a damper, which serves to dampen the torsional vibrations of the crankshaft, which reduces noise and facilitates the working conditions of the camshaft drive gears. 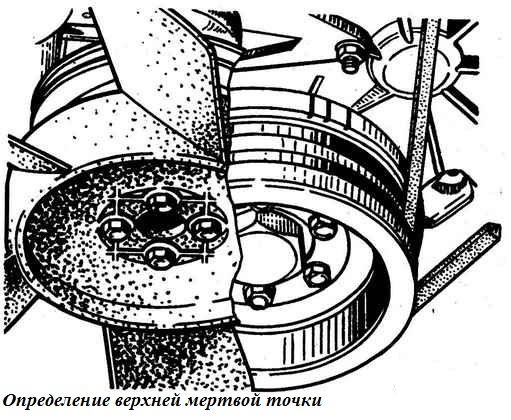 There is one mark on the crankshaft pulley and three marks on the damper disk (Fig. 3), which serve to determine the top dead center (TDC) and set the ignition.

The mark on the pulley and the third mark on the damper disc must be opposite each other. Mutual mixing of marks indicates the failure of the damper.

When aligned with the index rib on the cover of the timing gears, the third mark in the direction of rotation on the damper disk pistons of the first and fourth cylinders are at TDC.

The second mark corresponds to position 5 gr. to TDC and serves, together with the third mark, for setting the ignition on an idle engine.

The first mark corresponds to the position of 12 degrees before TDC and serves, together with the second and third marks, to control the correct ignition setting on a running engine.

The front end of the crankshaft is sealed with a rubber cuff with an oil deflector pressed into the timing gear cover.

The oil deflector has: a flange that drains oil flowing down the wall of the cover. To facilitate the operation of the cuff, another oil deflector is installed on the crankshaft in front of it.

Reliable operation of the cuff after a bulkhead is ensured by good centering of the timing gear cover.

The rear end of the crankshaft is sealed with packing of asbestos cord impregnated with an antifriction compound and coated with graphite.

The joints of the holder are sealed with L-shaped rubber gaskets.

In the rear end of the crankshaft, a socket is bored for installing the ball bearing of the input shaft of the gearbox

Flywheel cast in gray cast iron. It is attached to the flange at the rear end of the crankshaft with four ground bolts

A gear rim is pressed onto the flywheel for starting the engine with a starter. Before assembly with the crankshaft, the flywheel is statically balanced.