The engine must be thoroughly cleaned of dirt before disassembly

Disassembly and assembly of engines must be carried out with a tool of the appropriate size (wrenches, pullers, fixtures), the working surface of which must be in good condition.

With an individual repair method, parts suitable for further work must be installed in their original places.

To do this, such parts as pistons, piston pins, piston rings, connecting rods, liners, valves, hydraulic pushers, etc., when removing them from the engine, must be marked in any way that does not cause damage to parts (punching, inscription, attaching tags and etc.), or stack them on racks with numbered compartments, in the order corresponding to their location on the engine.

It is recommended to disassemble the engine in the following order: 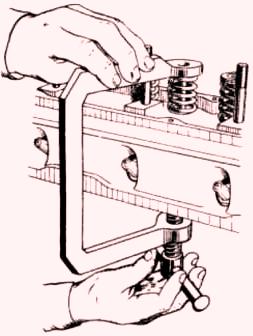 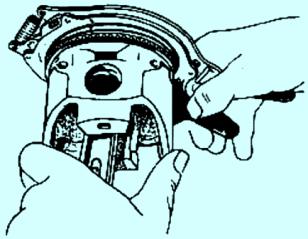 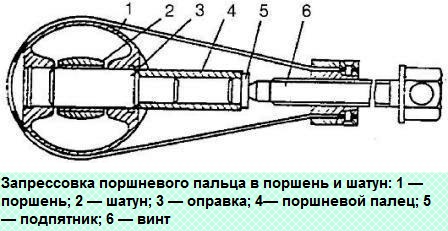 The cylinder block with holes in the cylinder walls, water jacket and crankcase or with cracks in the upper plane and ribs supporting the main bearings must be replaced.

As a result of wear, the cylinders of the block acquire the shape of an irregular cone along the length, and an oval along the circumference.

The wear reaches its greatest value in the upper part of the cylinders in the region of the upper compression ring, when the piston is at TDC; the smallest is in the lower part, with the piston position at BDC.

When repairing cylinders, two repair sizes are provided: 1st and 2nd. Pistons and piston rings are produced with the same repair dimensions.

All cylinders of a block should, as a rule, be machined to the same repair size with mm deviations set for cylinders of nominal size, except when it is necessary to “bring out” shallow scratches on the cylinder mirror (within the limits of increasing the cylinder diameter by 0.10 mm) - in this case, only defective cylinders can be repaired.

If there is a limited number of pistons for repair, it is recommended to calculate the diameter deviations for each cylinder (based on the actual size of the piston skirt diameter designed to work in this cylinder with a clearance of 0.036-0.060 mm) and bore the cylinders to these dimensions.</ p>

Repair of intermediate shaft support bushings consists in replacing them with repair bushings (increased thickness), followed by boring to a nominal or repair size with a tolerance set for

nominal size supports - depending on the degree of wear of the shaft bearing journals. Before repairing the supports, it is necessary to remove the pipe 7

When installing repair bushings, it is necessary to ensure that the holes of the oil channels match. Countershaft bearings should be bored in one setting to ensure alignment.

Damage of threaded holes in the form of nicks or thread breakage of less than two threads is restored with a tap to the nominal size.

Threaded holes that have worn or stripped threads of more than two threads are restored by cutting an oversized thread, installing threaded drivers with subsequent threading of a nominal size in them, or installing threaded spiral inserts. The latter method is the most efficient and less time consuming.

In the presence of cracks of any nature, the crankshaft must be replaced.

To remove wear products in the cavities of the connecting rod journals and in the oil channels of the crankshaft, it is necessary to unscrew the neck plugs, flash (with a solution of caustic soda heated to 80 ° C) and clean the cavities and channels with a metal brush.

After cleaning, they must be washed with kerosene, blown and dried with compressed air, then screw the plugs with a torque of 38-42 Nm (3.8-4.2 kgf m).

If the thread in the holes is damaged up to two threads, it is restored with a tap to the nominal size. If two or more threads are torn off, then the repair is carried out as follows:

The sharp edges of the chamfers of the oil channels are blunted with a conical abrasive tool, and then the necks are polished.

If there are holes, burnouts and cracks on the walls of the combustion chambers and the destruction of the bridges between the valve seats, the cylinder head must be replaced with a new one. The repair of threaded holes is similar to that indicated for the threaded holes of the cylinder block. 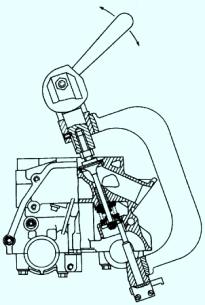 To check the tightness of the valves, it is necessary to pour kerosene alternately into the inlet and outlet channels of the cylinder head.

The leakage of kerosene from under the valve plates indicates their leakage.

Leaking valves are removed from the cylinder head using a valve spring compressor.

When disassembling, lay the valves in order, corresponding to their location in the head, for their subsequent installation in their original places. 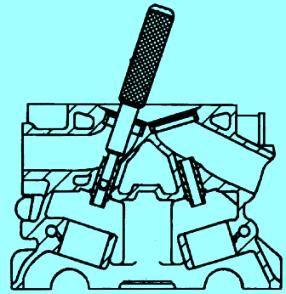 The cylinder head is repairable if, after machining the valve seat, the distance from the camshaft axis to the end of the valve stem pressed against the working chamfer of the seat is at least 35.5 mm.

If this condition is not met, the cylinder head cannot be repaired. The cylinder head is also beyond repair if the surface adjacent to the block has a non-flatness of more than 0.1 mm.

The bushings during assembly should be inserted into the head hole freely or with light force.

After installing and reaming the bushings, machine the chamfers of the seats (by grinding or boring), centering the tool on the hole in the bushing.

After chamfering, it is necessary to reduce their width by machining the inner surface of the seats at an angle of 30 ° to the size "c" equal to (2 ± 0.4) mm for the intake valve seats, (2 ± 0.3) mm for the seats exhaust valves.

Then grind the valves using a lapping paste composed of one part M-20 micropowder and two parts I-20A oil.

Before reassembling the cylinder head, it is necessary to clean the combustion chambers and the intake and exhaust channels from soot and deposits, after wetting the soot with kerosene, this prevents the soot from spraying when it is removed and prevents the ingress of toxic dust when breathing.

Wipe and blow them with compressed air. On the installed valve guides, it is necessary to simultaneously install the spring support washers with the help of a mandrel and press on the valve stem seals.

Lubricate the valve stems with the oil used for the engine, insert the valves into the bushings according to the order of their installation and assemble them with the springs using a tool.

Make sure that the crackers have entered the annular grooves of the valves. Pour kerosene into the inlet, outlet channels and make sure the valves are tight. To determine the clearance in the camshaft bearings, you need to install all the bearing caps in accordance with their numbers.

Centering of these covers is carried out using a cylindrical mandrel with a diameter of 35–0.02 mm, laid in bed.

If the gap in one of the bearings is more than 0.15 mm, then either the cylinder head or the camshaft must be replaced.

The surfaces of the bearing journals and cams must be free of scuffs and deep pits and not have wear that exceeds the maximum allowable.

After checking the shafts, it is necessary to clean and polish the surfaces of the necks and cams. 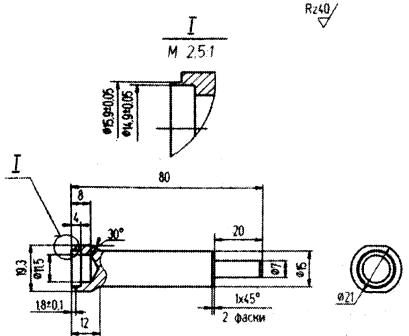 It is not allowed to clamp the body of the hydraulic tensioner during assembly in order to avoid violation of the geometry of the plunger pair.

Disassembly and assembly of the pump are similar to the indicated operations for engines ZMZ-4025, -4026. 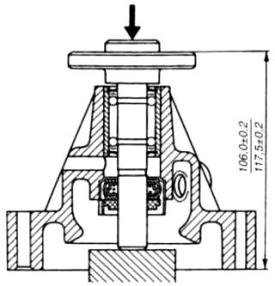 The only difference is that when pressing on the bearing roller of the pump pulley hub, the size of (106 ± 0.2) mm should be maintained.

Oil PumpIf there is a malfunction in the lubrication system caused by a malfunction of the oil pump, it needs to be disassembled. For disassembly, you must do the following: - bend the mustache of the mesh frame, remove the frame and mesh; 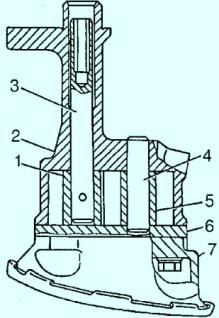 The engine must be assembled in the following order:

Metal should be removed flush with the worn surface of the cylinder;

Note The crankshaft, flywheel and clutch assembly are not balanced

It is recommended to press the stuffing box into the cover using a mandrel;

Sub-assembly of the connecting rod and piston group. Selection of pistons to block cylinders, as well as piston pins to pistons and connecting rods, should be carried out at a temperature of parts (20 ± 3) ° C.

Pistons by outer diameter and cylinders by inner diameter are sorted into five size groups.

Pistons of the same size groups as the cylinders must be installed in bored or new block cylinders.

Selection from neighboring groups is allowed, while, as with the selection of pistons in working cylinders, the selection is made according to the pulling force of the probe tape with a thickness of 0.05 mm and a width of 10 mm.

Piston marking - the letter indicating the group is stamped on the piston bottom;

The letter designating the cylinder group is inked on the outer surface of the block, to the right, opposite each cylinder. For ease of selection, fingers, connecting rods and pistons are divided into four size groups as they decrease in size. 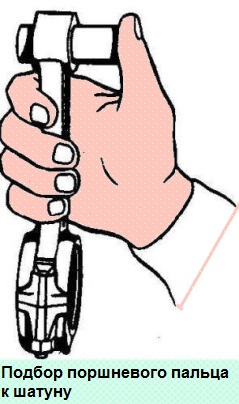 The piston pin is matched to a connecting rod belonging to the same or neighboring group with a clearance of 0.0045 to 0.0095 mm.

Since the linear expansion of the piston material is approximately 2 times greater than that of the pin material, at normal room temperature the pin enters the bore of the piston bosses with an interference fit.

The size groups of the piston and pin must match. The piston complete with piston pin, piston rings and connecting rod assembly must be controlled by weight. The difference in weight sets for one engine should not exceed 10 g.

After assembling the pistons and piston pins, it is necessary to continue the subassembly of the connecting rod and piston group in the following order:

The connecting rods and pistons must be oriented as follows before assembly with the piston pin: 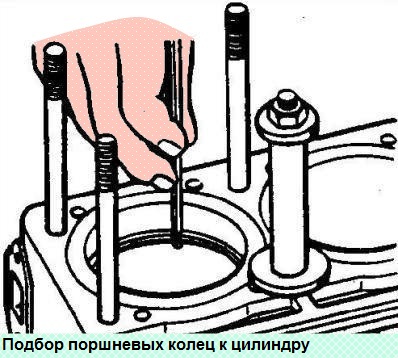 In worn cylinders, make the smallest gap 0.3 mm for compression rings and 0.5 mm for steel disks of oil scraper rings; 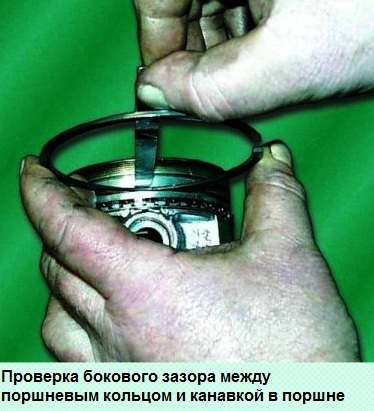 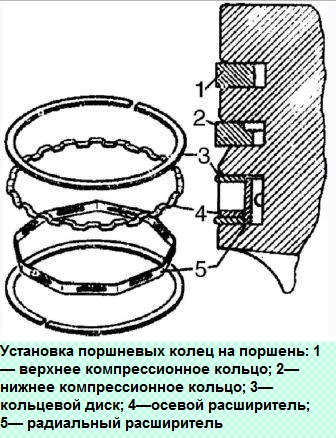 In this case, set the lock of the two-function expander at an angle of 45° to the lock of one of the annular discs; 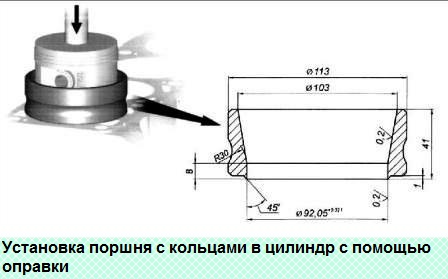 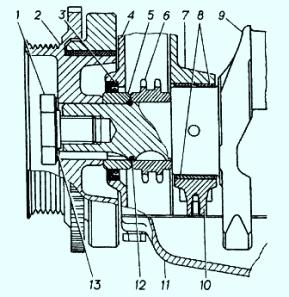 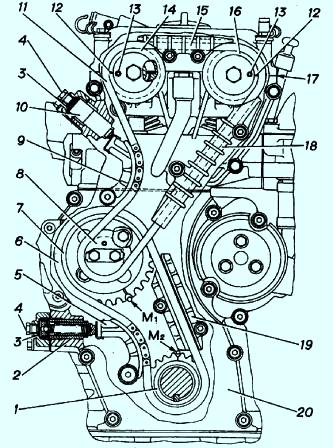 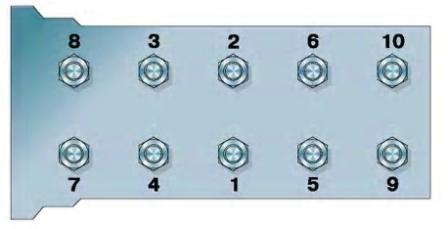 The cylinder head bolt tightening sequence is shown in the figure. Lubricate the threads of the bolts with oil before installation;

With further cranking, the camshaft should rotate independently under the action of the valve springs until the next cams touch the tappets;

The given positions of the camshafts are stable and provided by the angular arrangement of the cams;

By turning the camshaft counterclockwise, tighten the drive branch of the chain, while the mark 12 on the sprocket should coincide with the upper plane of the cylinder head 17. The crankshaft must not be allowed to turn;

By turning the camshaft counterclockwise, tighten the chain, while mark 12 on the sprocket should coincide with the upper plane of the cylinder head;

After removing the camshafts and cylinder head, the crankshaft can only be rotated back to its original position or 2 turns.

Turning the crankshaft 1 turn, even if the marks on the pulley and the chain cover match, will lead to incorrect timing.

If the camshafts and sprockets are installed incorrectly, the marks on the sprockets will not match the upper plane of the cylinder head. In this case, it is necessary to remove the sprockets, turn the crankshaft in the direction of rotation by 1 turn and repeat the installation of the sprockets, as described above;