A feature of the ZMZ-40524 engine ignition system is the presence of four separate ignition coils installed directly on the spark plugs, instead of two separately installed coils serving two engine cylinders each

The electronic control unit processes the data received from the system's sensors and controls the ignition coils by applying low voltage pulses to them.

In the ZMZ-40522 engine, sparking occurs simultaneously in two cylinders: 1st and 4th or 2nd and 3rd, and in the ZMZ-40524 engine - in accordance with the order of operation of the cylinders.

There are no mechanical moving parts in the ignition system, so it does not require adjustments and maintenance during operation.

The ignition coils of the ZMZ-40524 engine are radically different in design, their removal and installation are described in this article.

For the initial check of the coil, you need to remove the coil from the candle well and insert a known-good candle, and press the candle body to the ground.

The same wiring must be connected to the "mass" of the coil (where the coil was attached with a nut) to the engine ground. We start the engine for a short time.

The presence of a spark between the electrodes of the candle will indicate the health of the coil.

Connect an ohmmeter to the terminals of the primary winding and measure its resistance, it should be 0.4 - 0.5 Ohm.

Connect an ohmmeter to the terminals of the secondary winding and measure the resistance, it should be 5 - 7 kOhm.

1. Disconnect the wire from the negative terminal of the battery. 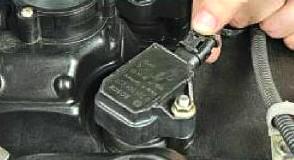 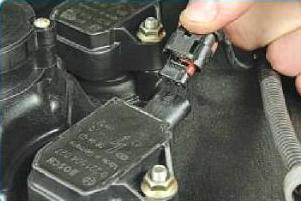 2. Squeeze the clamp of the harness block

3. Disconnect the wiring harness block from the ignition coil 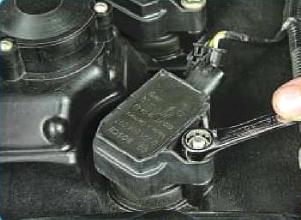 4. Unscrew the nut securing the coil to the cylinder head cover

5. Raise the coil and remove the tip from the spark plug

6. Removing the coil from the candle well 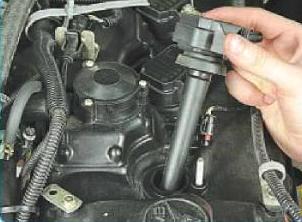