The pump provides a constant flow of fluid through the cooling jacket of the block and cylinder head, after which the fluid passes through the thermostat and radiator, giving off heat to the surrounding air.

The cooling jacket, pump, thermostat and radiator form a "big circle" of circulation 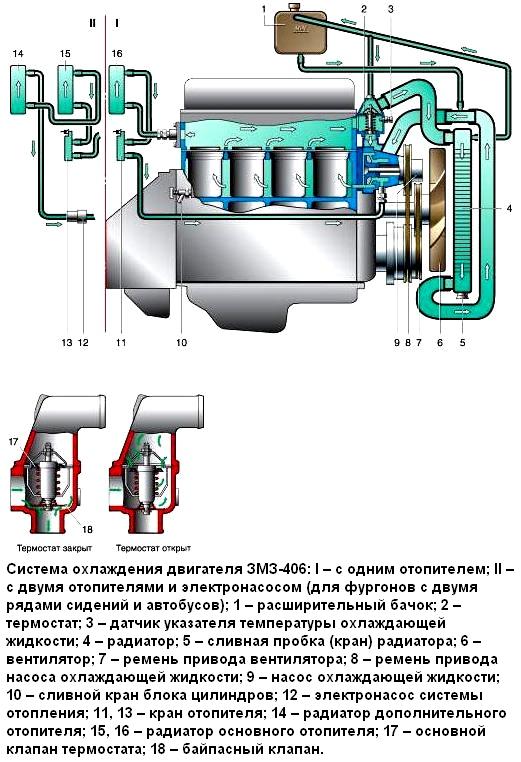 The amount of liquid passing through the heater radiator does not depend on the thermostat and is regulated only by the heater cock. 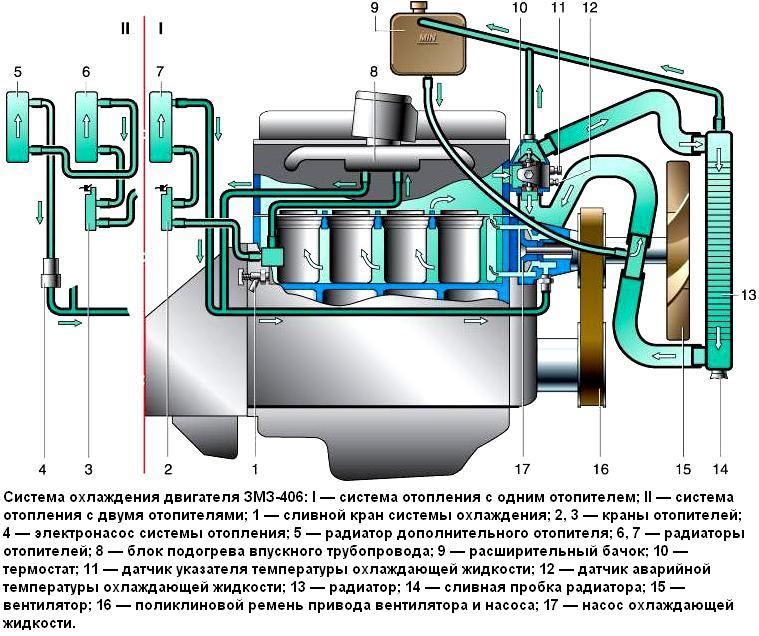 Coolant pump - centrifugal type, located in front of the cylinder block driven by a crankshaft pulley with a poly-V or V-belt (for ZMZ-402 and UMZ-4215) belt.

The redistribution of liquid flows is controlled by a thermostat, with two valves: main and bypass.

On a cold engine, the main valve is closed, and all the liquid circulates in a "small circle", returning immediately to the cooling jacket bypassing the radiator. This speeds up the warming up of a cold engine.

At a temperature of 94°C, the main valve opens completely, and the bypass valve closes and all the liquid circulates through the engine radiator.

Fan - with a six-bladed plastic impeller. It is driven from the crankshaft by a V-belt or poly-V-ribbed (for ZMZ-406) belt.

The fan axis of the ZMZ-402 rotates in two bearings.

For UMZ-4215 engines, the fan has a bearing, the same as for the pump. The bearings are installed in a special bracket fixed on the cover of the timing gears with three pins.

At ZMZ-406, the fan impeller is installed on the coolant pump pulley.

The UMP motor fan drive has a tension pulley on a separate bracket.

Radiator - tubular-tape, with side plastic tanks.

The tanks are connected to the core of the radiator through a rubber seal by crimping the base plate along the flange of the tanks.

There are brackets on the tanks and the upper plate of the radiator core for attaching the radiator to the body.

There is a plug or tap for draining the coolant on the left side of the tank in the direction of the car. 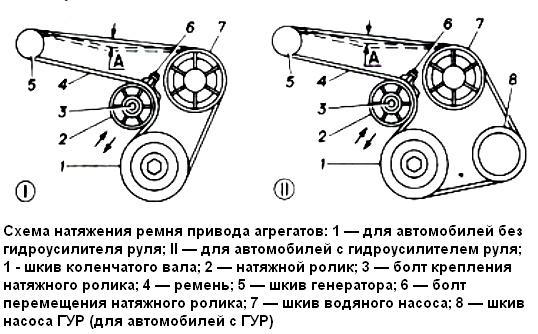 Expansion tank — plastic, connected by a hose to the pipe of the lower radiator tank, a pipe to the thermostat pipe and to the left radiator tank.

There is a MIN mark on the reservoir to indicate the lowest coolant level allowed in the reservoir. The expansion tank is closed with a screw plug.

The tightness of the system is ensured by a valve in the plug of the expansion tank, which maintains excess pressure in the system on a hot engine (due to this, the boiling point of the liquid rises to 115 ° C and its evaporation losses decrease).

The valve opens when the pressure in the system drops (on a cooling engine).

On the ZMZ-406 engine, on the left side, and on the UMZ and ZMZ-402 engines, on the right side, there is a valve for draining the coolant from the cylinder block.