The design of the engine cooling system ZMZ-40524

The circulation of the coolant in the system is created by a centrifugal water pump driven by the crankshaft.

The pump supplies liquid to the cooling jacket 6 of the cylinder block, from where the liquid enters the jacket 1 of the cylinder head and then to the thermostat housing 2.

Thermostat 2 automatically regulates the flow of coolant to the radiator depending on its temperature. 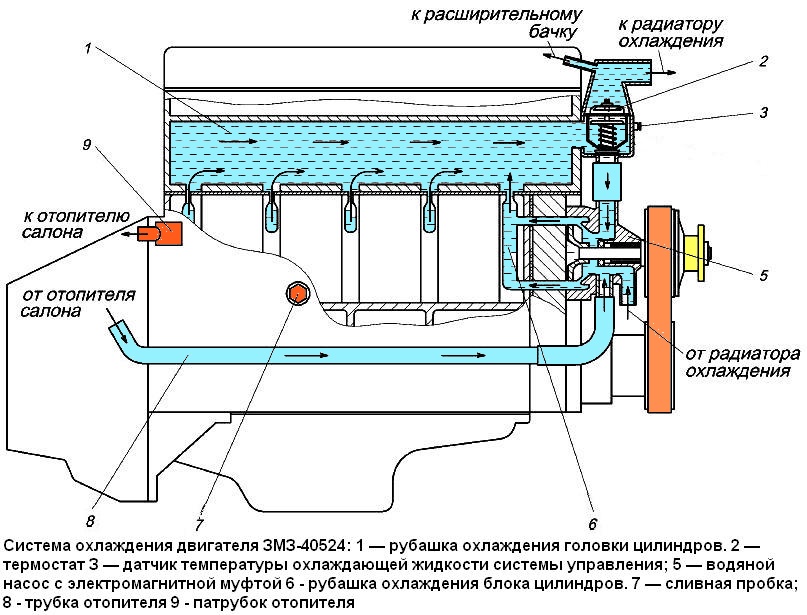 Through the fitting of the thermostat cover, air is vented to the expansion tank when the system is filled and the steam that occurs in the cooling system.

The coolant is drained from the engine through the hole on the left side of the cylinder block, closed with plug 7.

The optimal temperature regime of the coolant in terms of minimum wear and fuel consumption lies within plus 80-90°С.

The temperature regime of the engine is controlled by the temperature gauge and the overheating indicator (warning lamp), which are part of the instrument cluster of the car.

The coolant temperature gauge is controlled by a signal generated by the control unit based on information from temperature sensor 3 located in the thermostat housing.

In the instrument cluster of a car, information about the current engine temperature is taken from the coolant temperature gauge, and if the maximum permissible value of 105 ° C is exceeded, the coolant overheat indicator lamp is ignited.

The indicator color is red.

The thermostat is located in an aluminum housing mounted on the outlet of the cylinder head cooling jacket and is connected by hoses to the water pump, radiator and expansion tank. 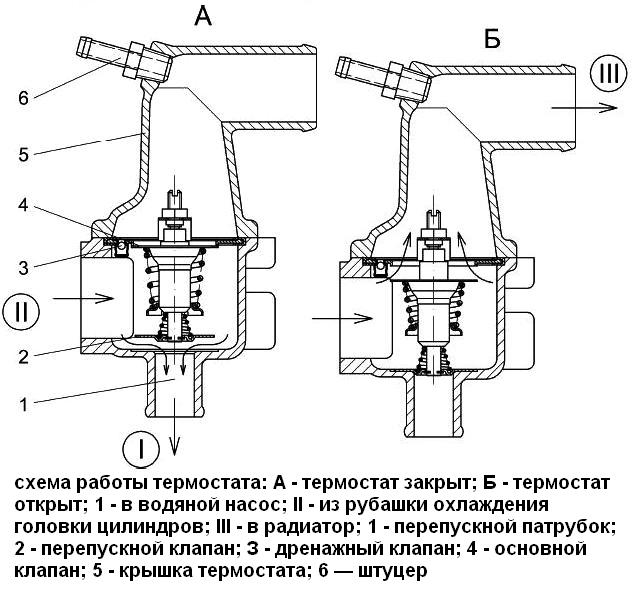 The thermostat automatically maintains the required temperature of the coolant in the engine, turning off and on the circulation of the liquid in a large circle through the radiator.

On a cold engine, the main thermostat valve 4 is closed, and all the coolant circulates through the open bypass valve 2 of the thermostat to the water pump in a small circle, bypassing the radiator.

When the engine warms up and the coolant temperature rises to plus 82 ± 2°C, the main thermostat valve starts to open, and the bypass valve closes. In this case, part of the coolant begins to circulate in a large circle through the cooling radiator.

At a temperature of plus 97 ± 2 ° C, the main valve is fully open by at least 8.5 mm, the bypass valve is closed and all the coolant circulates through the radiator in a large circle.

In the flange of the thermostat there is a hole with an automatic drain valve 3.

The hole is used to release air when filling the cooling system.

When the engine is running, the water pump creates fluid pressure, under the action of which the valve ball rises and closes the hole, preventing fluid from leaking into the radiator.

The thermostat in the housing must be installed in such a way that the protrusion on the thermostat post fits into the groove of the housing, which provides the least resistance to the flow of coolant.

It is forbidden to operate the engine without a thermostat, which will lead to engine overheating in the summer, to a long warm-up and engine operation at a lower temperature in winter.

The maintenance of the operating temperature by the thermostat in the cooling system has a decisive influence on the wear of engine parts and the efficiency of its operation.

Possible malfunctions of the cooling system and how to fix them

Cause of malfunction - Remedy

Radiator core clogged with dirt and insects - Wash the outside of the radiator core. Blow out with compressed air

The engine does not warm up to operating temperature for a long time, the thermal regime is not stable while driving