To control the systems, the car is equipped with an instrument cluster in which control devices are installed: a voltage gauge, a tachometer, a speedometer, an engine temperature gauge, an oil pressure gauge, a fuel gauge and signaling devices

To remove the instrument cluster, first remove the trim by unscrewing the four screws.

Then unscrew the four screws securing the combination; disconnect the electrical connectors and remove the instrument cluster.

Repair the instrument cluster by block replacement of faulty instruments. 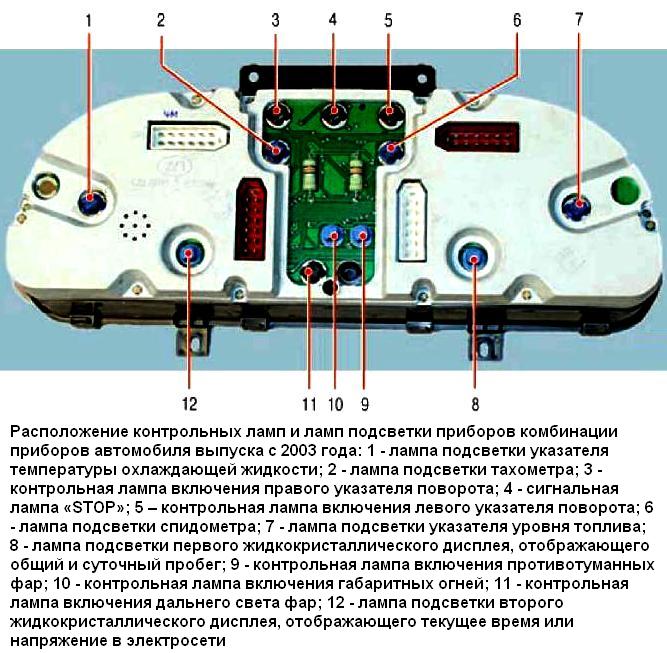 To replace devices, remove the protective glass and unscrew the nuts securing the defective device on the reverse side.

An electronic speedometer with a stepper motor is installed in the instrument cluster.

The speedometer consists of an arrow speed indicator, a trip meter and a daily trip meter. The daily counter has a reset button.

The speedometer works in conjunction with an electronic Hall sensor mounted on the gearbox.

When the vehicle is moving, the sensor is driven by the gear of the gearbox output shaft.

For one revolution of the sensor shaft, 6 pulses of electric current are generated.

These pulses enter the speedometer chip, are converted and fed to the microammeter, which indicates the speed of the car, and to the stepper motor, which rotates the drums of the distance indicators. 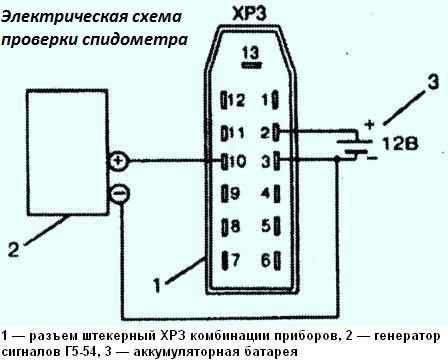 To check the health of the speedometer, it is necessary to assemble the electrical circuit shown in Fig. 3.

According to the same principle, the accuracy of the readings of the counting node is checked.

The error of the counting node should not exceed +1%. 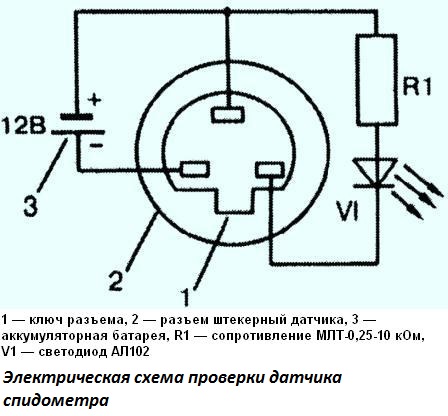 To test the speedometer sensor, assemble the electrical circuit shown in fig. 4. For one revolution of the sensor roller, the LED should flash 6 times.

An electronic tachometer is installed in the instrument cluster to measure the engine speed.

The tachometer consists of a milliammeter and an electronic circuit.

The alternating voltage from the generator (taken to the rectifier unit from the stator phase) enters the amplifier, then it is converted in the microcircuit and enters the milliammeter, the arrow of which shows the number of revolutions.

The higher the generator speed, the more alternating current pulses enter the electronic part, the greater the angle of the tachometer needle deviates. 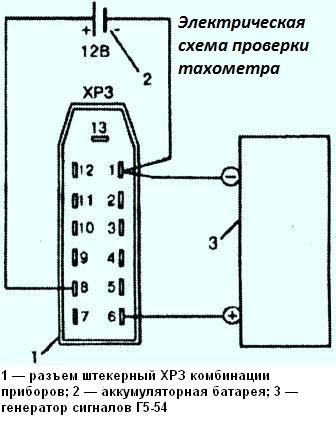 To check the tachometer, assemble the electrical circuit shown in fig. 5. From the G5-54 signal generator, apply rectangular pulses of positive polarity with an amplitude of 12–2 V and a duration of 200–250 μs to terminals No. 1 and No. 6 of the KhRZ connector.

In the instrument cluster, an electromagnetic fuel gauge is installed, which works in conjunction with a sensor installed in the gasoline tank.

The pointer is an electromagnetic ratiometer with fixed measuring coils and a moving permanent magnet.

The magnet is attached to the arrow axis of the pointer.

The pointer coils are wound at an angle of 90° on a special plastic frame.

The frame with the coils and the magnet is placed in specialth screen to exclude the effects of extraneous magnetic fields on them.

When current flows through both coils, a resulting magnetic field is created.

A permanent magnet, interacting with the magnetic field of the coils, is set in a position depending on the direction of this field.

The direction of the resulting magnetic field depends on the change in the ratio of currents in the coils, which is determined by the resistance value of the sensor, which in turn depends on the amount of fuel in the tank. 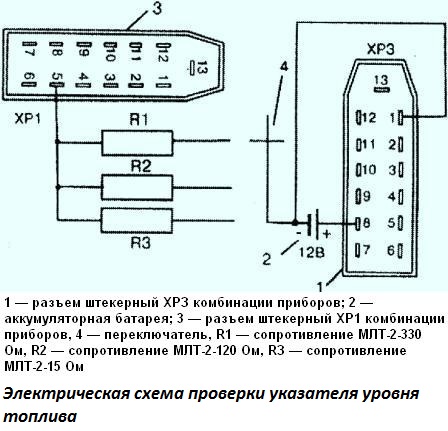 To check the fuel level indicator, it is necessary to assemble the electrical circuit shown in fig. 6.

The deviation of the arrow from the indicated divisions is no more than the width of the arrow.

With an intermediate float position of 70 mm from the sensor flange to the bottom of the float (measured perpendicular to the flange), the resistance should be 118 + 10 Ohm.

An electromagnetic ratiometric engine coolant temperature gauge is installed in the instrument cluster.

The device consists of a pointer and a sensor installed in the engine. The pointer device is similar to a fuel gauge, and the sensor is a semiconductor thermistor that sharply changes its resistance depending on temperature changes.

Changing the coolant temperature changes the resistance of the sensor, which causes a change in current in the pointer coils and the resulting magnetic field turns the permanent magnet and pointer to the appropriate position on the scale. 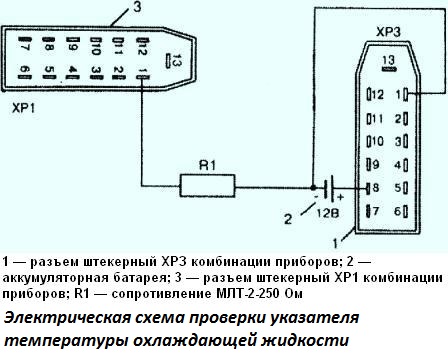 To check the coolant temperature gauge, it is necessary to assemble the electrical circuit shown in fig. 7.

The pointer arrow should not deviate from the 80°C division by more than the width of the arrow.

In addition to the temperature indicator of the cooling system, the car is equipped with an engine overheating alarm.

The sensor automatically turns on the lamp in the instrument cluster when the coolant temperature reaches 104-109 ° C.

To control the pressure in the engine lubrication system, a ratiometric type electromagnetic indicator is used.

The device consists of a pointer located in the instrument cluster and sensor 23. 3839.

The pointer device is similar to a fuel gauge, and the sensor is a variable resistance, the value of which changes depending on the position of the membrane, which in turn changes its position on the pressure value. 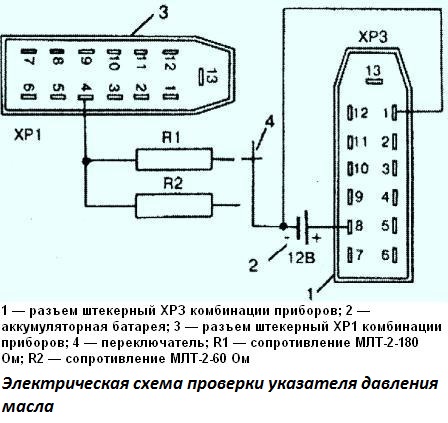 To check the oil pressure gauge, it is necessary to assemble the electrical circuit shown in fig. 8.

The deviation of the arrow from the specified points is no more than the width of the arrow.

In addition to the lubrication pressure gauge, there is a signaling device in the instrument cluster.

When the pressure in the engine lubrication system drops from 0.4-0.8 kg / cm 2, the indicator lights up in the instrument cluster.

The signaling device works with an MM111-V type sensor.

To check the voltage indicator, it is necessary to assemble the electrical circuit shown in fig. 9.

For control, it is necessary to use a voltmeter with a limit of up to 30 V class I and an adjustable DC source (for example, B5-48).

Changing the voltage of the source, use the control voltmeter to determine the accuracy of the readings of the voltage indicator of the instrument cluster.